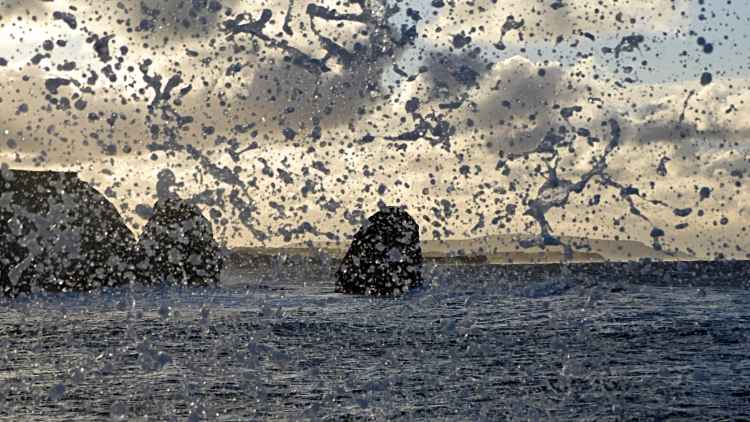 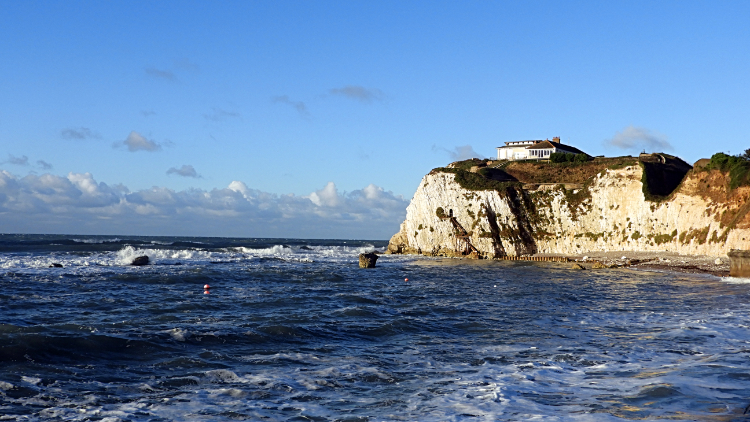 View to the English Channel from Freshwater Bay

It was a fresh late September morning. A light breeze blew from west to east, straight along the English Channel which I would be looking out to on my right for almost all of today's walk. The breeze did me the favour of blowing the early morning clouds away. I was in for a treat. As I set off from my accommodation at the Albion Hotel and walked on the promenade of Freshwater Bay the waves rolled inshore and surf spattered the walkway. I made sure I kept my feet dry while acting the King Canute role, watching the magnificent early morning spectacle while stepping back and forth with the rhythm of the waves. I stepped on to the beach, all shingle and hard to walk over, before stepping off the seashore stones to follow road and path up on to Afton Down. I stood for a while looking back across Freshwater Bay and to the mighty chalk cliff on the west side of the bay where Fort Redoubt stood atop. It has an impressive vantage point overlooking the channel. 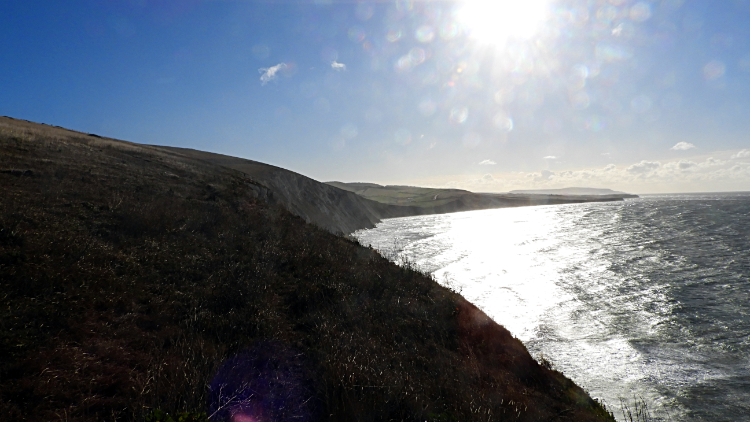 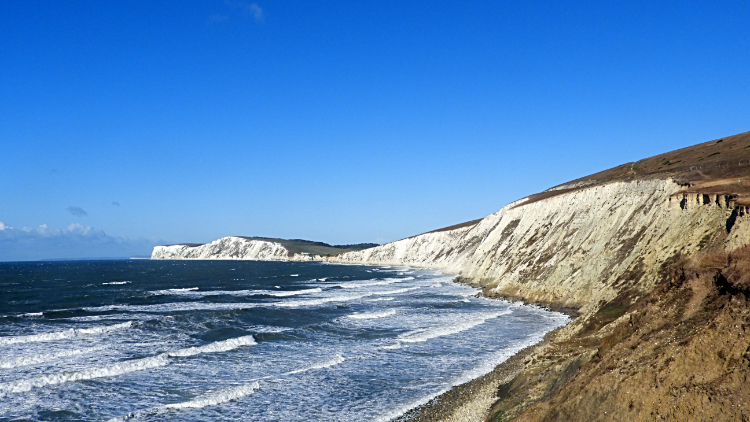 I followed the coastal path eastwards from Afton Down to Compton Down, shifting my view from land to sea and then back again. Down below was the sweep of Compton Bay. It was an impressive sight, all the better for the unbroken sunlight which brightened my mood of the day. What could be better. Coast path walking in brilliant sunshine. I could have shouted with delight and perhaps I should have. The tide was in while I walked the length of Compton Bay. Had it been out I could have popped down to the beach and looked for some of the Dinosaur footprints which are visible at low tide. The Dinosaurs were inhabitants of the Isle of Wight long before us lot. At Freshwater Cliff I was obliged to climb uphill a little and to walk close to the A3055 Military Road. The road is susceptible to subsidence and in fact quite a lot of the south-west coast of the Isle of Wight is crumbling away into the sea. My path along it was clear evidence of this. I headed back down from the military road to Compton Chine and from thereon kept a little distance from it. Noticeably there was little traffic on the road; I was discovering the south-west coast of the Isle of Wight is a quiet and little populated place compare to what I had witnessed in the north and certainly quieter to the resorts I was bound for in the east of the island. 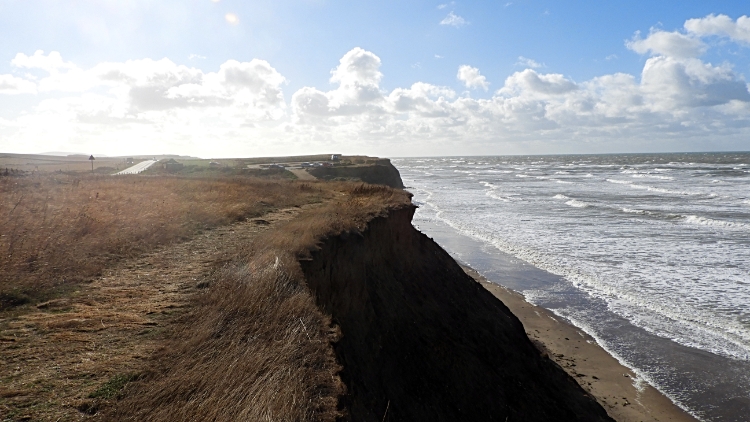 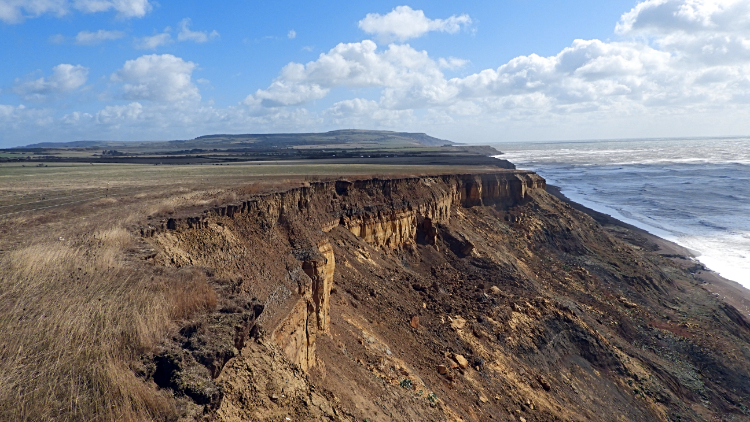 Coastal erosion at the Undercliff

From Compton Down to Hanover Point I meandered on the coastal path as it was forced to detour from its previous course to one a little higher and further north. That was because the old line of the path was now down in the sea. Hanover Point, also known as Fossil Forest is constantly unveiling new dinosaur and fossil finds because of the ongoing erosion of the coastline. After Hanover Point, near Brookgreen I noticed that the chalk cliff I had followed since visiting the Needles yesterday was now ending and being replaced by loose clays along Roughland Cliff and Undercliff. Here the erosion was even worse, recent landslips into the sea were clear to see and in some places hollows had formed a little way from the sea. I had detour walks around the slippages, some quite lengthy. The meandering continued as I walked to Barnes High, marked by a trig point 53 meters high. The erosion was as bad here too. A couple of times I had to walk precariously close to farmers fields barbed wire fencing, such was the collapse on the sea side. There is a lot of the Isle of Wight being lost to the sea every year. I didn't know that before today. 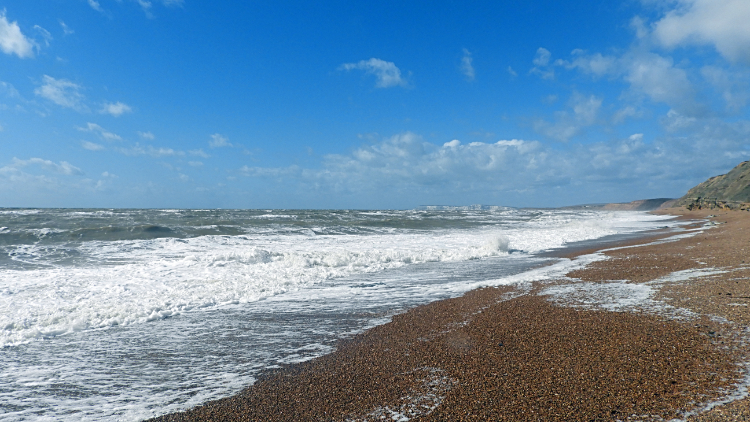 The coast at Shepherd's Chine 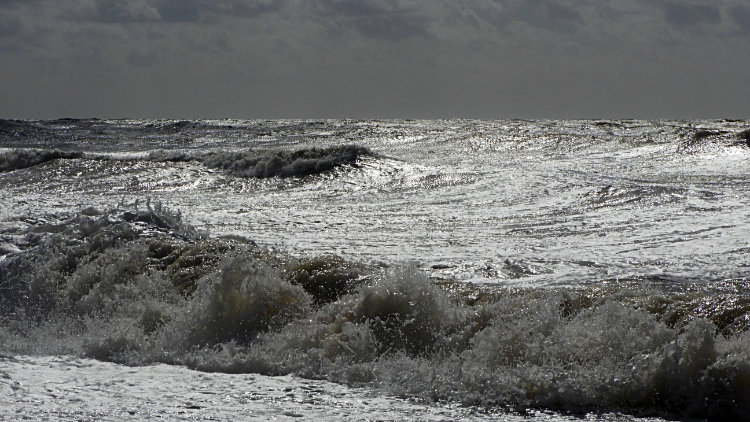 Waves crash in from the English Channel

I had read about Chines before today's stage. They are a feature of the Isle of Wight and most of them are found on the south-west coast of the island. A chine is a coastal gully and altogether there are 21 named Chines on the island. I would encounter Compton Chine, Chilton Chine, Marsh Chine, Barnes Chine, Cowleaze Chine, Shepherd's Chine, Whale Chine and Walpen Chine today. With the first five already behind me I arrived at Shepherd's Chine and here I decided to leave the coastal path for a while and go down to the sea. A pathway had been constructed to help me get safely down. Despite it being just a fair breeze the waves were crashing in and they were higher than me just out to sea. It was mesmerising to watch them roll in and break just before hitting land. And it was a wonderful feeling to know it was just me, the coast and the sea. There was nobody else around. 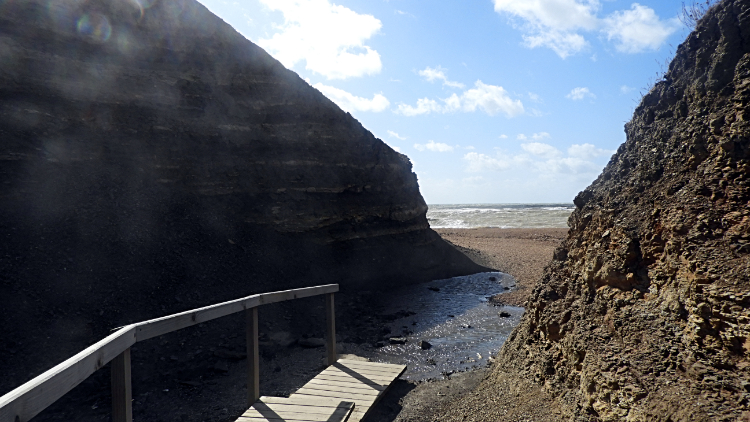 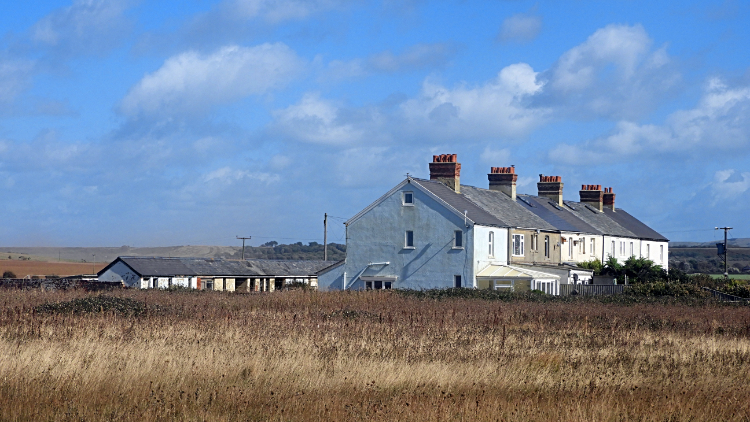 Climbing back up from Shepherd's Chine and resuming the walk on my sun drenched day was a pleasure. I ambled on; it was just 1.30 in the afternoon and I was in no particular hurry. I spotted a row of cottages set back from the sea, at around 200 meters from Atherfield Point. The properties looked serenely romantic on this good September day but I knew they would feel the full brunt of any storm coming down the English Channel. No protection here. Before getting in line with the terrace I came to another stretch of erosion which forced me closer to a farmers field. Shockingly close in fact because I was walking beside a three-tiered electric fence. If the path was gone and I had been forced to jump I would have risked going electric fence side. Best a jolt than the sea. Good job it never came to that. After the narrow passage between shock and awe I reached Atherfield Point where a wooden pulley system had been arranged to feed provisions down to boats by the sea. Contrived ladders, fastened together, were there for the seafarers to get themselves up and down the crumbling cliffs. 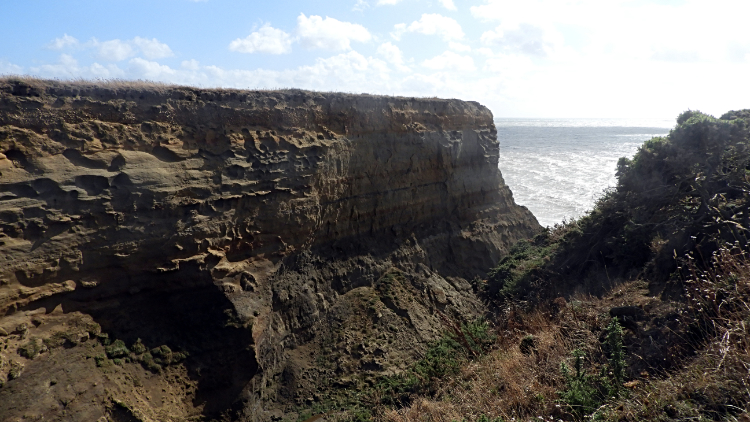 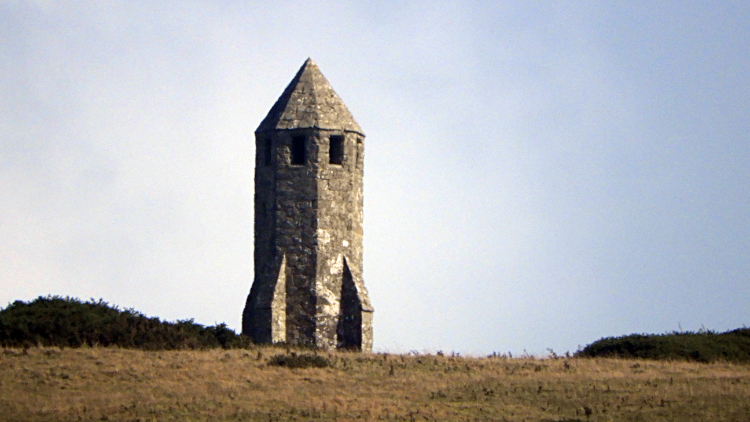 I reached the vast gouge of Whale Chine and here I was forced to walk back to the Military Road and along it for 100 meters to clear the chine on the other side. Walking back to crumbling coast line I spotted a monument on a far hill which told me my home for the night was not too far away. My walk along the south-west coast of the Isle of Wight was coming to an end. The monument was the Pepper Pot on St Catherine's Hill. Below it was the village of Chale and within the village the Wight Mouse Inn, my destination for the night. Across a few fields I went and alongside Walpen Chine to reach the village itself. What a gorgeous walk I had just had, all airy walking above the shifting cliffs of the south-west coast of the Isle of Wight. I am glad I did this stretch of the walk before I am a fossil too.