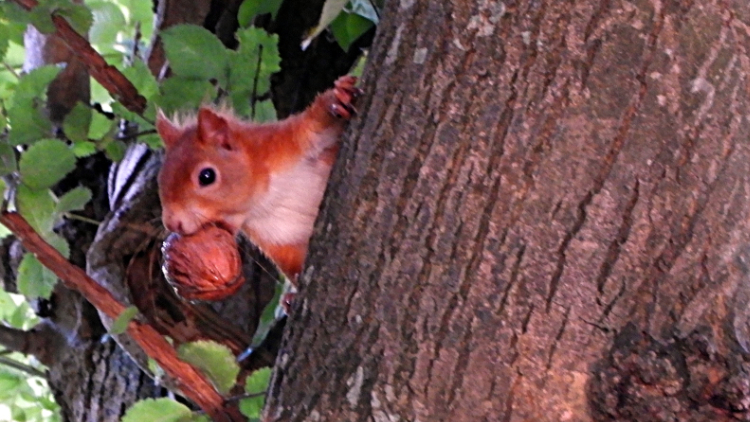 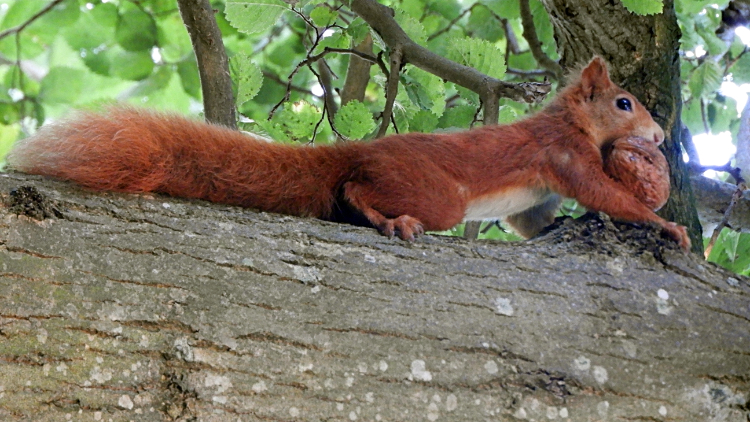 Off to the larder with its booty

I made an early start. I had a ferry crossing and airplane flight booked for later on and by the end of the day I would be home. Yet, here on the Isle of Wight at 7.30am on a lovely sun kissed morning I had little thought of home. I knew I had to get a move on, especially as I had a time consuming diversion to fit in to the itinerary. Walking from Ryde I strolled past the posh houses on Spencer Road and then along the leafy avenue of Ladies Road which bisected Ryde Golf Club. It was on Ladies Walk I had the most fascinating of encounters with a divine Red Squirrel. As I walked along the dead straight path, lined with mature trees on either side, I spotted this little face about ten feet high in a tree looking directly at me. The Red Squirrel had a large nut in its mouth, possibly a Walnut. It continued to keep an eye on me, from its stance on the tree, body shielded but forward facing. I dare not move any closer, hoping to get a good camera shot before it was spooked. The Red Squirrel paid me the courtesy of waiting until I got the shot. A real poser it was. Then in an instant it ran up the tree and across a horizontal branch to cover. I never saw it again but it had already made my day. As I continued walking I recalled my amazing encounters with animals during my six days on the Isle of Wight. It started on the first days with the White Egrets in the creek and the Kingfisher fly-past. Most special though were the Peregrine Falcon adventure of two days ago and this one with the Red Squirrel. Truly special, all fixed in my virtual bank of nice memories. 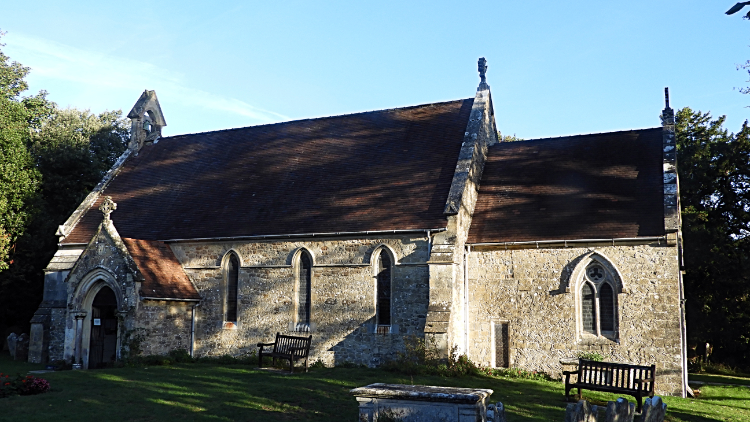 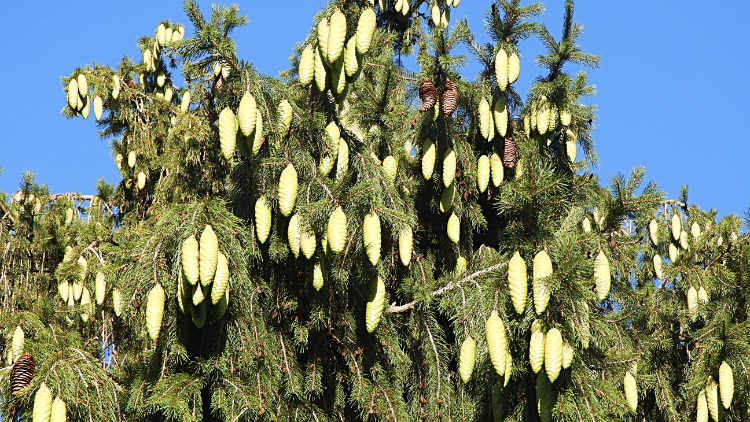 A profusion of cones

At the end of Ladies Walk and with my head still buzzing from the Red Squirrel adventure I reached Holy Cross Church, Binstead. A lovely building to behold. In fact there was beauty all around on this early stage of my final day on the coastal path. And ironically on a day where I would see precious little coast at all. The church was a lovely building, as were all the houses of this part of the island. Binstead is a lovely place, especially the northern quarter I was walking through. And Church Road was the jewel, grand houses, gorgeous gardens, age old trees. And not a sign of litter which was so refreshing. Even the footpath signs were a cut above. Well constructed, exquisitely carved and hand painted in cream. It was a walk through opulence and though such walks can be often stuffy by meeting barred gates and unfriendly gestures here all the people I met were amenable and affable. Perhaps it was the good weather but everyone I met on this early hour of my walk were of the happy and welcoming type. 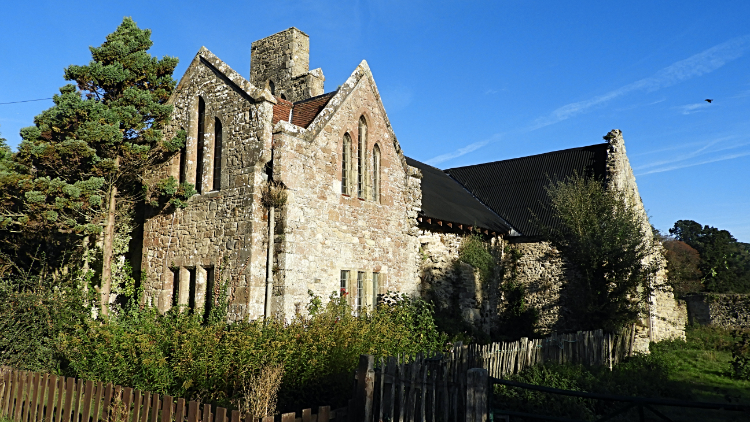 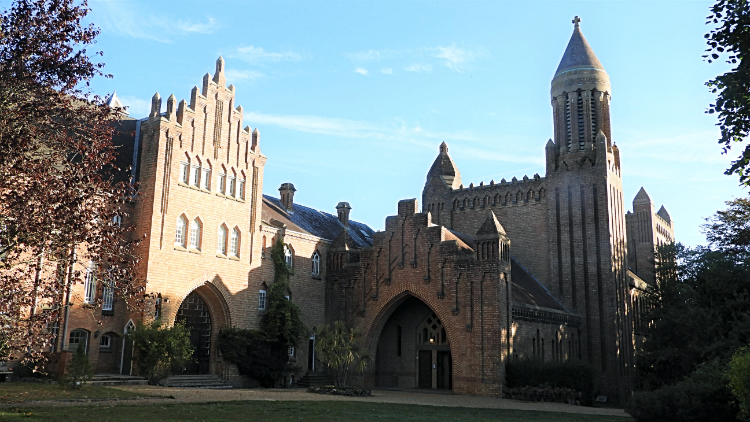 I reached an information sign by the path titled 'An Abbey by the Sea'. It was about Quarr Abbey which I was approaching and of the monks who lived at the abbey and regularly sailed to the Low Countries of Europe. They were affluent monks by all accounts, also owning properties in places such as Norfolk and Devon. Of course I had to make a short break from my walk to visit Quarr Abbey. I took twenty minutes out to look around the home of the brotherhood which included the impressive gardens and the jewel of the present abbey built in an amalgam of French, Byzantine and Moorish styles. I found it very imposing. On my way from the abbey I walked past the Orchard and through a pretty wildflower meadow. There is great attention to detail at Quarr. I had not been aware of the abbey until I saw that sign an half hour earlier and the chance visit was a real bonus to my day. 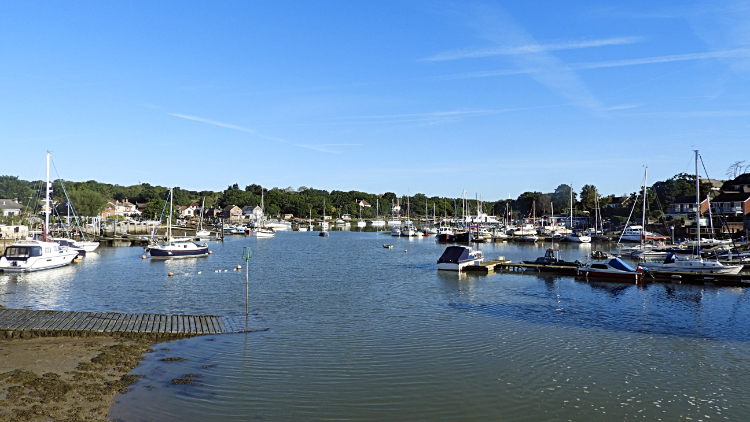 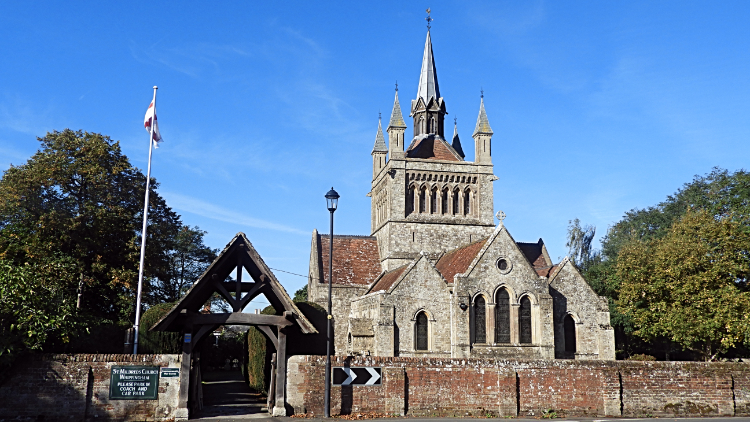 From Quarr Abbey I continued walking west along Quarr Road, becoming Quarr Lane and to meeting the short B3331 B road providing access to the port of Fishbourne. Passing a building with a sign saying 'The Fishbourne, an Inn of Distinction' I continued on passing the Fishbourne Car Ferry Terminal and then I had a second encounter with a Red Squirrel, only this time a more camera shy one. Leaving the road I followed a woodland trail to arrive on the side of the A3054 Newport and Ryde road. I followed the road down to Wootton Creek where I stopped for a while on the road bridge to watch a Heron fishing in the old mill pond. Next I walked through the back streets of Wootton to reach Brocks Copse Road, a rural way with little traffic, leading directly to Alverstone Road and to the village of Whippingham. he jewel in the village was undoubtedly St Mildred's Church, a favourite church of Queen Victoria and Price Albert. I could see why, it is so beautiful. 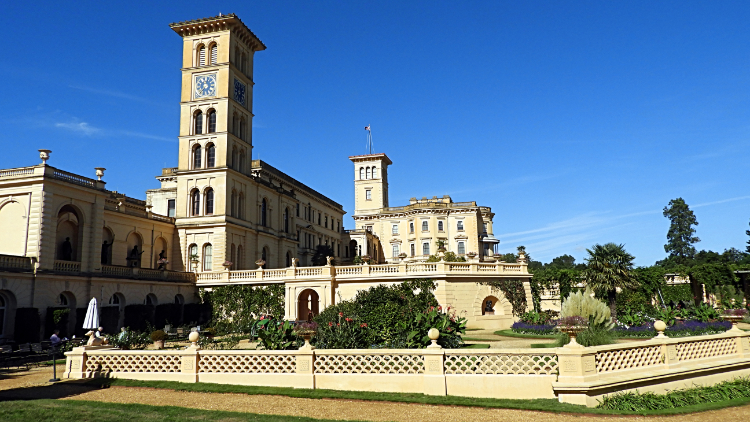 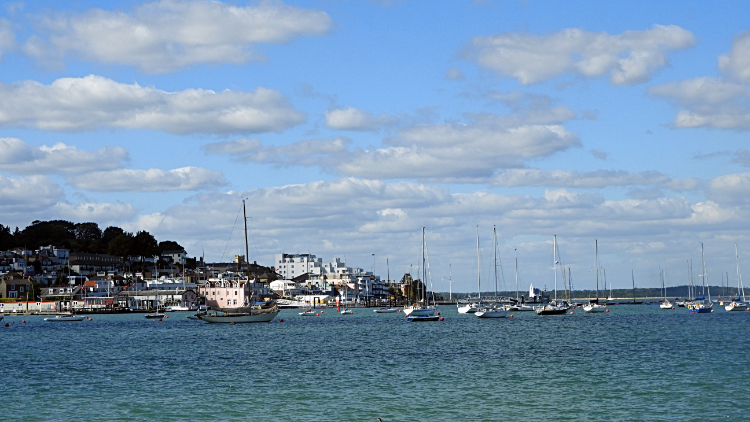 Talking of of Queen Victoria and Price Albert, my next port of call was off the coastal path and my final diversion from the walk. My next hour was spent in the house and the grounds of Osborne House. To be honest I found the house interior quite dark and the art and sculpture was not to my taste. But by contrast I found the exterior of the house built in the style of an Italian Renaissance palace to be very appealing and the grounds were very impressive indeed. And wow, what lovely gardens. They are kept exactly as they were for the royal couple and I can see why they loved this place so much, a real peaceful sanctuary from London. Alas I did not take the Valley walk to Queen Victoria's Bathing Machine as I did not have the time. I was aware of my appointment with the Cowes Ferry. And so I took my leave of Osborne House and the grand grounds to complete my Isle of Wight Coastal Path walk by striding into East Cowes. The path pointed my way straight down the A3021 main road down to the ferry point but instead I diverted to the quieter option of Victoria Road and then Minerva Road followed by Clarence Road to reach my end point. My walk of seventy miles on the Isle of Wight Coastal Path was completed. 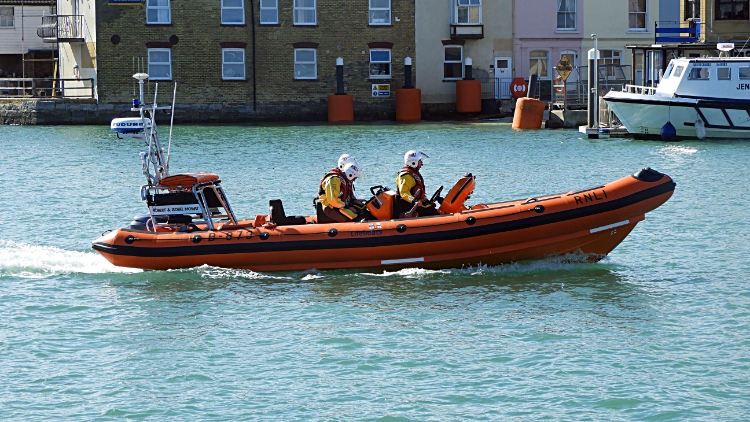 Lifeboat on the River Medina 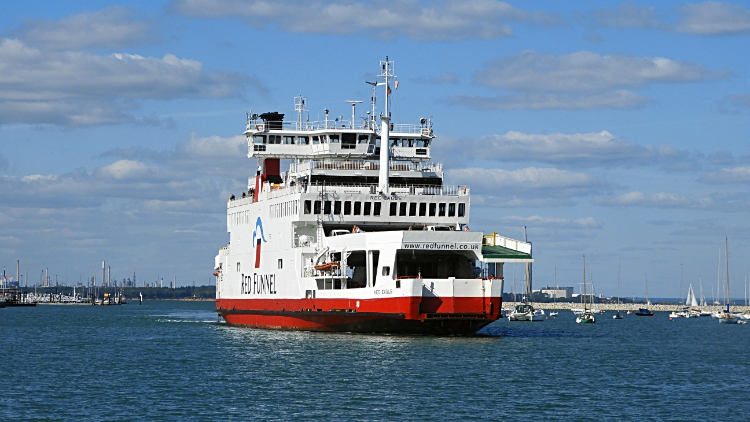 My ferry back to the mainland

I had made good time and so I had a bit of time to myself when I reached the hubbub of East Cowes. I found a cafe to enjoy lunch and chill out for a while. It was quite warm still but instead of taking an outside seat I sat inside for lunch. I was glad I had done so as while I ate I saw outside diners being hassled by a rather persistent and irritating Herring Gull. Some will not take no for an answer will they. After lunch I had a short walk around the town, in doing so watching the local lifeboat crew head down the River Medina and out into the Solent. Then I took a walk around to the Classic Boat Museum and Gallery which was sadly closed. I had a quick half hour to go before my ferry arrived and wanted to spend it there. Instead I found a seat on the Esplanade and chilled out looking at the stirrings. Yachts sailed in the nearby harbour, a procession of them sailing from the river into the bay. The Queen Galadriel, an impressive Tall Ship sailed by too. Then all too soon I saw my ferry approaching. An hour later I was leaving the island; happily with many fine memories of my visit. Of the six day walk: Day One - the creeks, the White Egrets, the Kingfisher, the old Town Hall. Day Two - Coastal Erosion, The Forts, The Needles, Tennyson Down, Freshwater Bay. Day Three: The long sunny day on the deserted south-west coast, the Chines, the time down by the wild sea. Day Four: The Peregrine Falcon, The Landslip, My first slip! and the rain. Day Five: Culver Down, my second time down!, the windmill, the lovely sands of Ryde. Day Six: The Red Squirrel, the lovely church, the impressive abbey, the grand church, Osborne House and the time out in East Cowes. And much more besides. What a week it was.