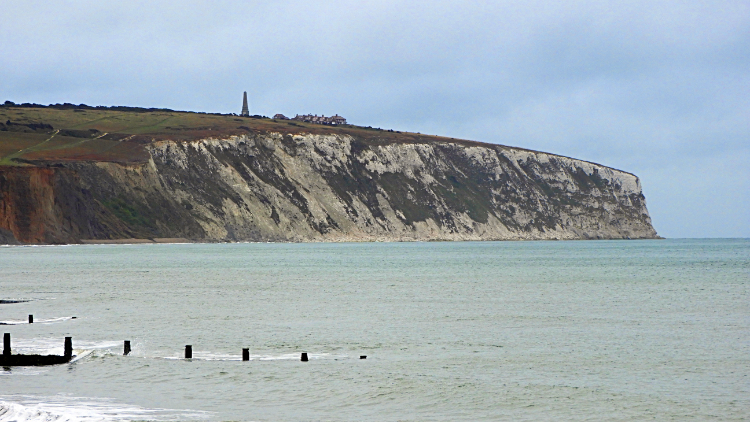 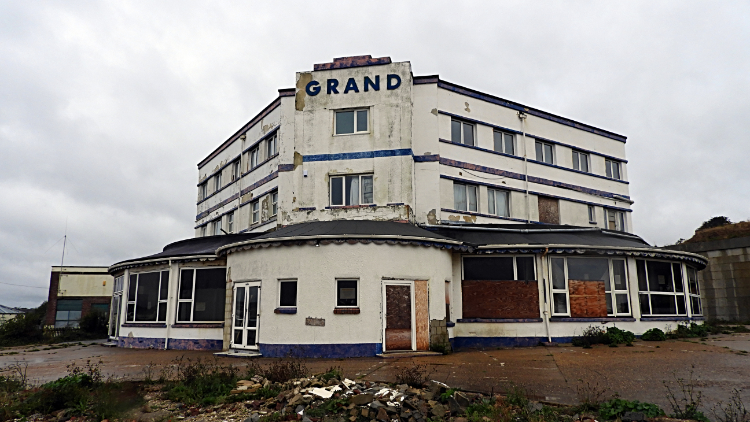 The Grand is not so grand any more

Though I walked under a cloudy sky on my departure from Sandown Carol had told me I should expect a much better day's walking. Listening to Carol Kirkwood's breakfast time weather forecast is more often than not a heartening motivation for the day ahead when I am on a long distance walk. Though yesterday was not, today and tomorrow were set fair with increasing amounts of sunshine promised as I went merrily on towards the end of my walk around the coast of the Isle of Wight. However as I walked from Sandown and past the sad relics of better seaside days such as the not so Grand Hotel the sky was as dull as the scene. Runners waving to me brightened the day as I walked along the seafront towards Culver Cliff. They were participants in the Sandown and Shanklin IOW Seafront 10K run and judging by their manner I guessed they were not in the elite group and nor were they over exerting themselves. Or perhaps they had just started running. Whatever, most of them shared a smile and a greeting with me as we passed each other. Apart from me and the runners there was nobody else around. Not long after seeing my last 10K runner I completed my Sandown seafront walk by passing the Isle of Wight Zoo and heading up a path on the top side of Red Cliff towards Culver Cliff. 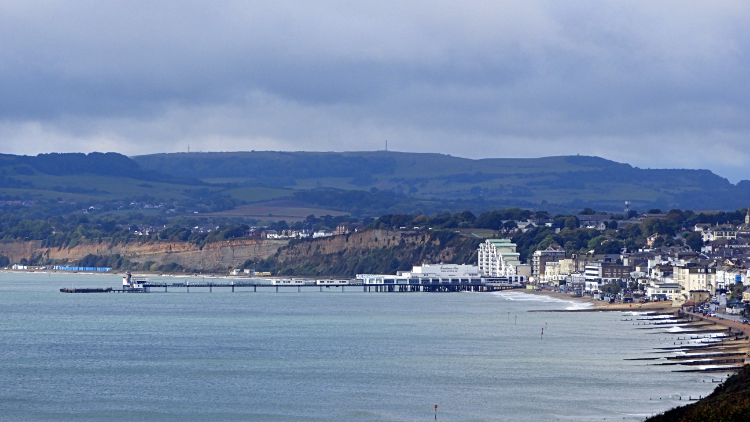 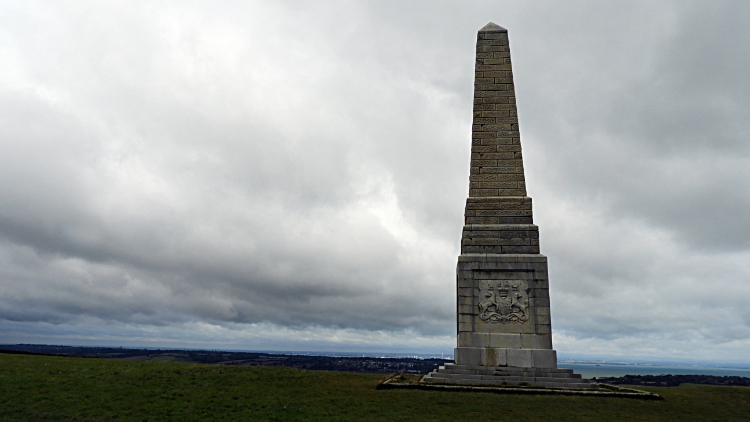 Once I had reached Red Cliff I came to a sign welcoming me to Bembridge Down, itself being the south section of the larger Culver Down. From the heights of Bembridge Down I looked back to the crescent shaped sweep of Sandown Bay and as I looked back I grinned with an ironical smile. Sunshine was bathing the bay and brightening all the buildings of Shanklin and Sandown. Just as soon as I had left. All the time I was there it had rained on me. Still the sunshine in the bay was promised to spread my way. Just not yet though. I continued across Bembridge Down to Culver Down and now not alone. There were other walkers enjoying the fresh air of Culver Down; a mix of strollers, ramblers and dog walkers. A large obelisk on the far north side of the down drew me towards it. The Yarborough Monument is an enticer. I had to look it over and discover more about it. So it was erected as a memorial to Charles Anderson-Pelham, the 2nd Baron Yarborough, founder of the Royal Yacht Squadron at Cowes. There you go. The pesky clouds still hung me as I left the site of the monument and as I began my descent from Culver Down. 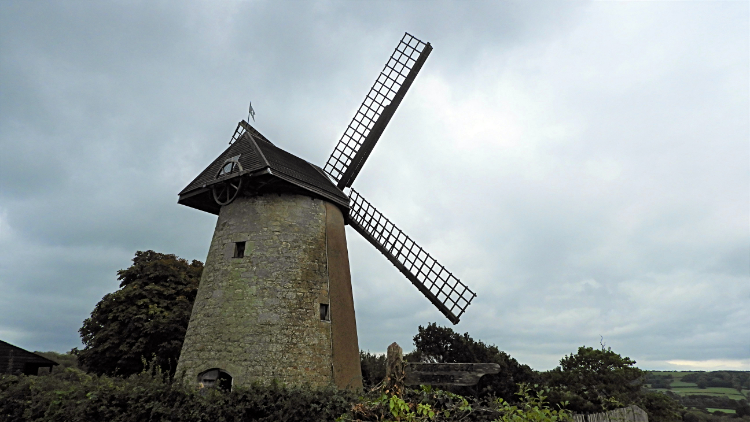 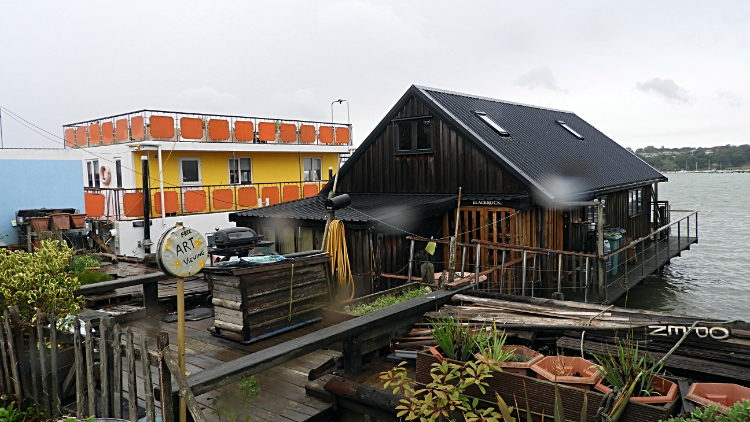 I should have descended from Culver Down on the coastal path to walk on the curve of Whitecliff Bay followed by edging inland past a huge holiday park and on roads through Bembridge to reacquaint with the coast at the islands most easterly point. But I didn't; instead tracking north on a more or less straight line towards Bembridge Windmill. Casually I walked along a path from Culver Down to Glover's Farm. All of a sudden I was carrying out a full forward roll, head over heels, rolling over my back and then grappling myself back to a standing position with the help of my arms. "Blooming heck, what the chuff happened?" I thought. Looking at myself my clothing was covered in a milky white slime. Culver Down is comprised of chalk and the damp chalk of morning is very slippery. While I was taking care on the descent I clearly was not taking enough. Embarrassed but not battered or bruised I dusted myself down as best I could and continued on my way. That was the second fall in two days, neither disastrous. However there was a consequence of the mishaps I did not yet know about which I will come to later.

Before I had walked from Culver Down I had enjoyed a great view north and west along the coastline of the island to St Helen's, Nettlestone, Ryde and beyond to Cowes. I could see the rest of my journey around the island laid out. The final fifteen miles. I was thrilled to see the finish which was now only a bit over a day away. That may be why I was so relaxed on the erroneous descent. Anyway, continuing on I followed lanes towards the windmill, on the way passing an information board which told the story of Bembridge Airport. During the airport history there were three grass landing strips in the 1930's which were all dug up during World War Two to stop gliders landing during a possible invasion. Moving on from the site of the airport I arrived at Bembridge Windmill and here I took a break from my walk to take a look around the windmill. The sole surviving windmill on the island, it is preserved well and contains much of the original wooden machinery. It was a fascinating place. Looking out from near the windmill I saw a bird of prey fly overhead. Smaller than my Peregrine Falcon of yesterday and judging by its size and flight I guess it was either a Hobby or a Hen Harrier. It was the right terrain for either and whichever bird, it was a beautiful sight to behold. From the windmill I tracked north-east to Bembridge Point and then walked around Bembridge Harbour, a rather scruffy place with businesses ran from shacks and houseboats all around the edge of the harbour. Some were well maintained. Others were dilapidated and crumbling in the water. 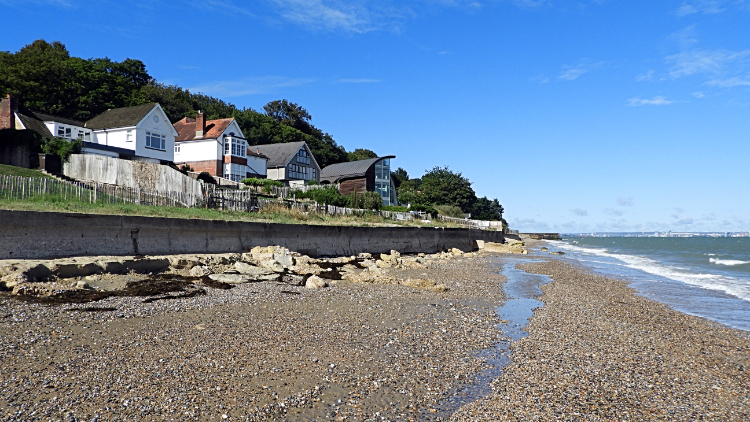 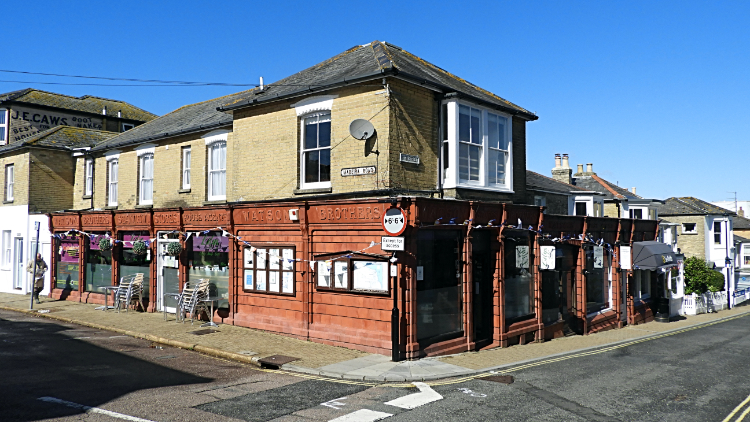 Time for coffee and cake in Seaview

After rounding Bembridge Harbour under the persistent cloud of the morning I reached St Helen's and here the sun began to shine. I was now beginning the final bearing of my island circumnavigation, north-west towards Cowes and the sun was out to join me make my way there. I greeted it with a huge smile. From St Helen's I passed the site of the Old Church but I could not get as close as one normally would due to more coastal erosion. Instead I continued on the diversion to rejoin the coastal path on a long wooded unmade avenue to reach water once more at Seagrove Bay. The sky was now suddenly clear of cloud. And it was about five degrees warmer than about an hour earlier. I sat on a seawall near the beach and stowed my coat away. I would not need it again on my Isle of Wight Coastal Path walk. A lady walking her dog came by and we joined in conversation. By coincidence she was from the North of England too and she told me she was in a minority. "Most people here are retired from the capital" she said, and added "We're just like Little London in Newport. There is a real place called Little London on the island". We had a laugh and I could imagine why people would escape from the hustle and bustle of big city life to a pretty, quaint and quite place such as this. It was so lovely. Bidding my fleeting friend goodbye I continued walking from Seagrove Bay to track through the Edwardian resort of Seaview towards Nettlestone Point. The village was gorgeous. Ii was early afternoon as I ambled along the pretty streets and I fancied a break for refreshments so when I spotted Lily's cafe and shop in the lovely old fashioned establishment once called Watson Brothers Stores I called in. The staff were so friendly and the coffee and cake was divine. 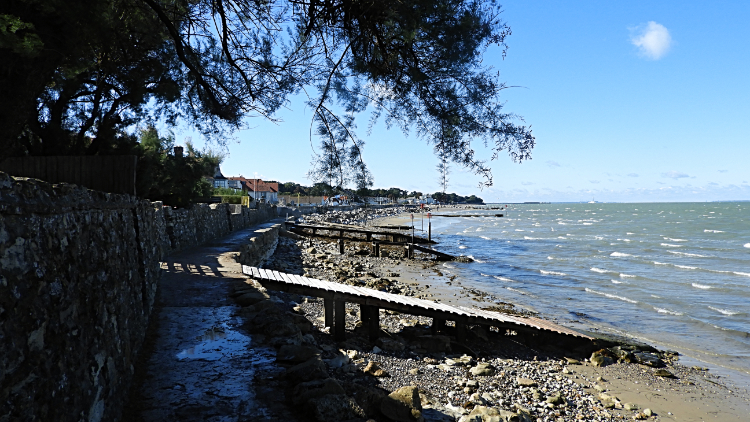 The path to Ryde from Seaview 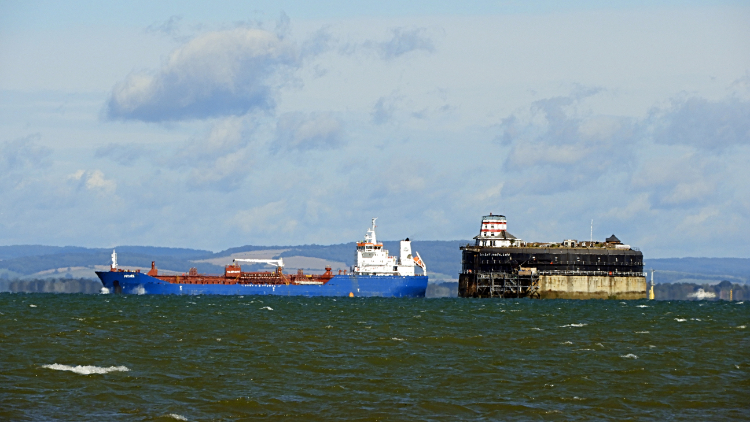 All refreshed and at just two in the afternoon on what was now a balmy mid September day I made my way back to the seafront and back to the Solent channel between island and mainland at Nettlestone Point. All that remained of my day walk, which was to end in the center of Ryde was to walk the length of Ryde East Sands, which coupled with the Ryde West Sands is the largest expanse of sand shore on the entire island. Looking out to the channel and to the area of the Solent known as Spithead I watched shipping passing through in either direction. I also watched activities on the Solent Palmerston Forts nearby including No Man's Land Fort and Horse Sand Fort. These guarded the east side of the Solent while the one's I saw on my second day, including Hurst Castle and Fort Victoria guarded the west side. The forts were never used for their original intention of defence and are now sold off for private enterprise. Indeed I saw cranes and building work being carried out on St Helen's Fort as I passed it. 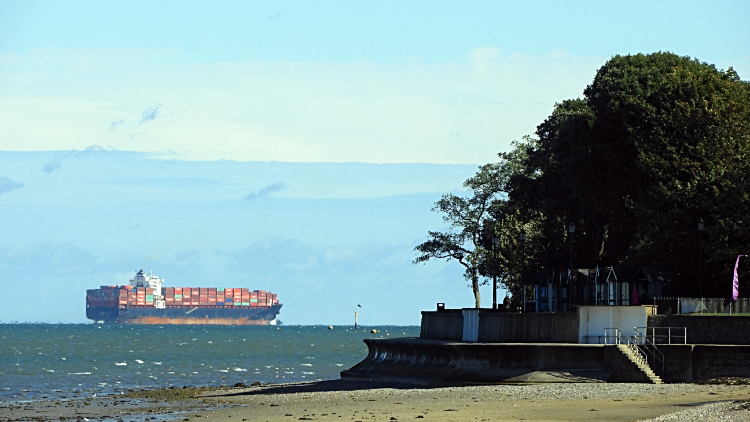 Container Ship sailing up the Solent 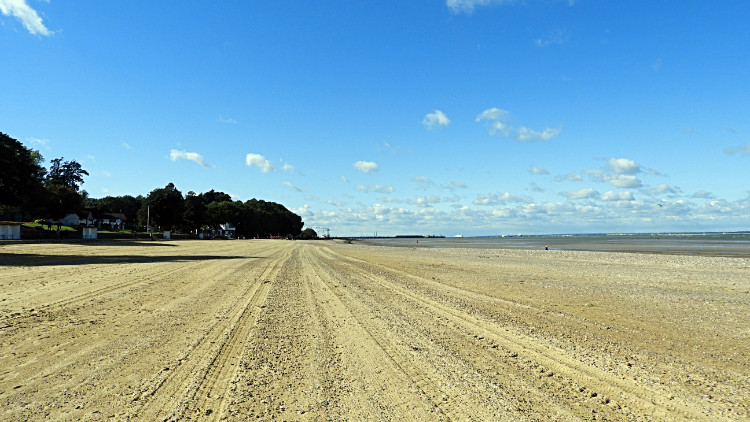 I stepped on to Ryde East Sands and set out to enjoy the rest of today's walk crossing the golden sands. At first all was quiet, just me and the golden grains under my boots with deep blue sea and bright blue sky to help me along. Visibility was excellent and I could clearly make out mainland buildings, in particular the unmistakable Emirates Spinnaker Tower. What an impressive sight. Closer to hand, the sea was full of activity. More vessels passed on their ways through the Solent and nearer still were fun-seekers in the water. Oystercatchers went about their funny antics of waddling through the water and digging for their dinner while wind-surfers glided past at a much greater speed. Each having fun at their own tempo. It was busier in the water the nearer to Ryde Pier I got which was my end target for today. Before I reached there though I left the sands to walk through the park at Canoe Lake Road where Swans and Coots entertained. It was a nice finale to my day and I so looked forward to the next walk which would see me end my present journey.

After the penultimate stage of my Isle of Wight Coastal Path walk I located my hotel and in my room I rested for a final evening on the island. It was when freshening up I noticed the damage I had done by falling twice in two days. Without noticing and without any pain suffered my left toenail had turned black. Sorry for mentioning it, but on one of the mishaps I must have damaged some blood vessels. I hoped it would recover on its own. (Postscript: the toenail took a year to grow back but grow back it did. And I suffered no pain at all. If I had not seen it I would never have noticed)