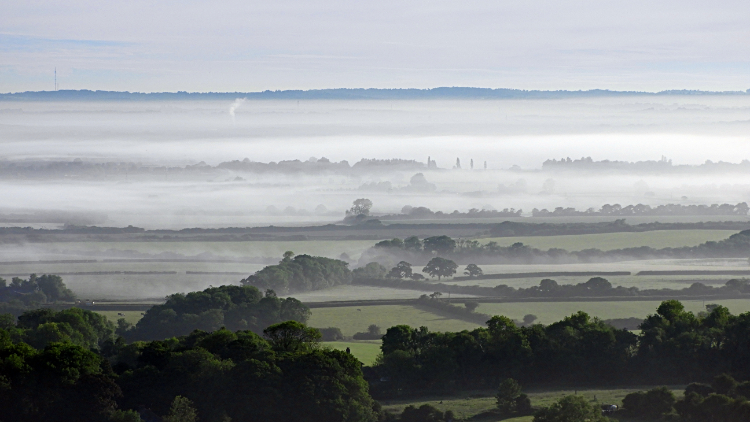 Early morning in the Low Weald 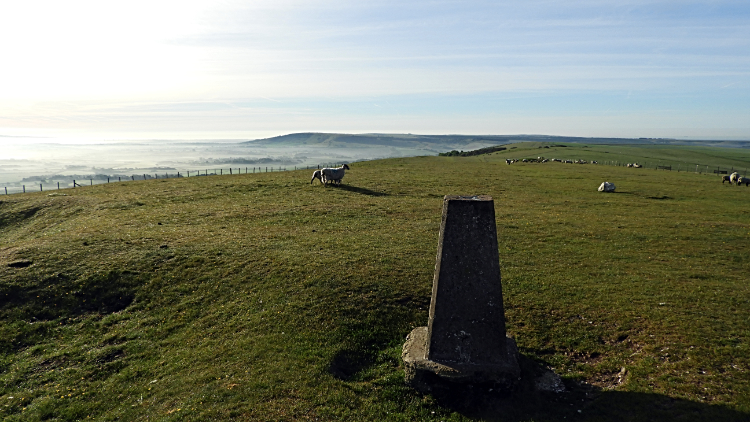 Yesterday I set off walking at 6.00am. Today I was up at 4.00am and walking forty minutes later. Having twenty miles to go and not wanting to rush I decided to make a start as early as I could. Being the first day of June the sun was already up and beginning to warm the day as I walked out of Alciston and up to the South Downs. After less than a half mile I was on a 150 meter climb which shook off any lingering lethargy I had from the early awakening. As I climbed the north-east facing bank of the Downs I looked back and across the Low Weald of East Sussex to see the amazing sight of early morning mist still hanging over the low land. It was a spectral sight, very attractive and so entrancing. I was glad I had risen early, lest I would have missed this wonderful spectacle. My climb to the tops, via a skirt around the disused Bopeep Chalk Pit was slow. I kept stopping and looking back at the awesome Low Weald picture. Eventually though I did rise to the top of my immediate South Downs and from Bopeep Chalk Pit I stepped up my pace and tracked to Firle Beacon. The views from this natural viewing platform were immense. Newhaven, Seaford and Brighton on the coast. Lewes and Hailsham inland. There were all in clear and startling view. Mist lingered around the lowlands. It was 5.30 in the morning. 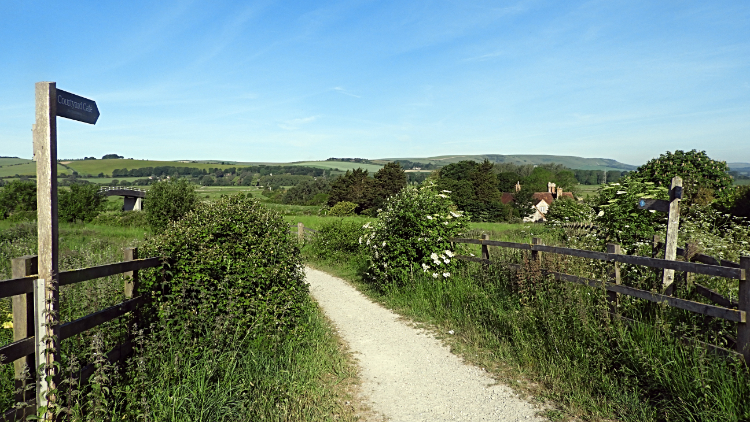 In the Ouse Valley 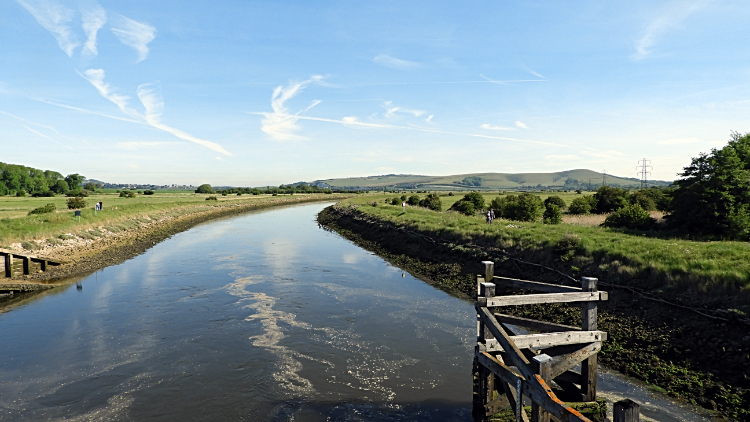 The next hour and a half of my morning walk were such a joy. The sun was rising into a clear blue sky and all was perfect in my world. I crossed the high Downs at a height constantly between 170 and 200 meters, undulating on the natural roller coaster to Beddington Hill which is easily identifiable due to a Radio Station and from there to Itford Hill which marked the end of this stage of high ground. All the time I was looking left and right to the beauty of the Sussex coast and to the beauty of the Sussex Weald. I shall not forget the views. From Itford Hill though the nature of my walk changed. I lost the long range views as I descended steeply to the valley of the River Ouse. Just before reaching the river, and after the bridge crossing of the A26 I arrived at Itford Farm. It was just 7.30am and the place was thronging with people. Little did I know the farm was now converted to a Youth Hostel. Apart from the hostelers there was also a running event taking place. I could not wait to escape the crowds so I walked on my way towards Southease. Unfortunately they chased after me, runners sprinting past at around one minute intervals. I worked out it was a staggered race. I crossed a railway line by a bridge and then I crossed the River Ouse by another bridge, this one being a Swing Bridge. With the road bridge I crossed before Itford Farm that was three bridges in a short stretch of walking. 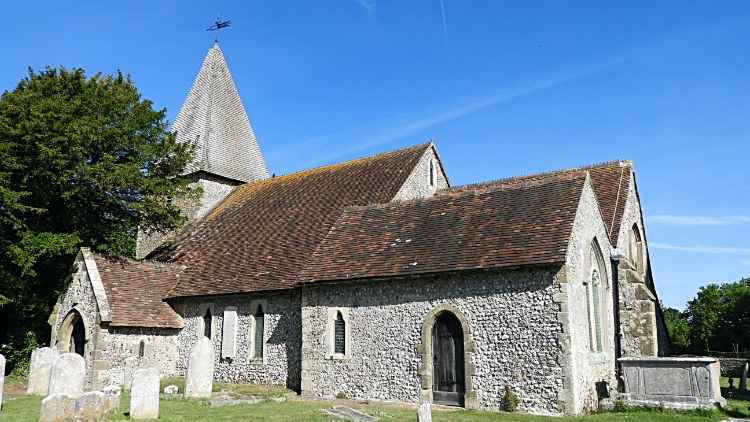 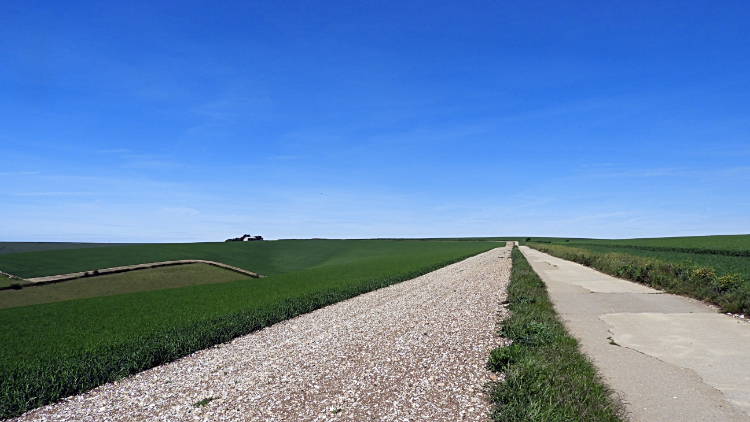 The boring concrete road of Front Hill and Iford Hill

Next up on my way was the village of Southease, the highlight being the pretty village church. Some villagers were on the village green putting up a Marquee. It was the weekend of open gardens. A board invited all comers to see the gardens and to take refreshments in the big tent. Not yet though, it was still early and the local folk were preparing. from southease I followed my path through a wood and then on field sides following the line of a road. The path led me to the village of Rodmell, yet another stunning East Sussex village. The recognised highlight of the village is Monk's House which was Virginia Woolf's home but I have to say I found all of the village very beautiful indeed. Especially the side north of the road which bisects the village. After admiring many of the stunning homes in the village I crossed the road and climbed along the south and plainer side of Rodmell back up the South Downs. My very interesting time in the Ouse valley was over but such was the beauty of what I had seen I banked Southease and Rodmell as places to visit with my wife Lil. Should we come this way in future. Back on my way I climbed to Mill Hill and then I climbed on to Front Hill on what I found to be the most boring and the most arduous section of the entire South Downs Way. First, the path was a boring dead straight line with no deviation. Secondly, the section from Front Hill to Iford Hill was concrete. And because crops were growing either side i could not get off it. It was one mile of hell. 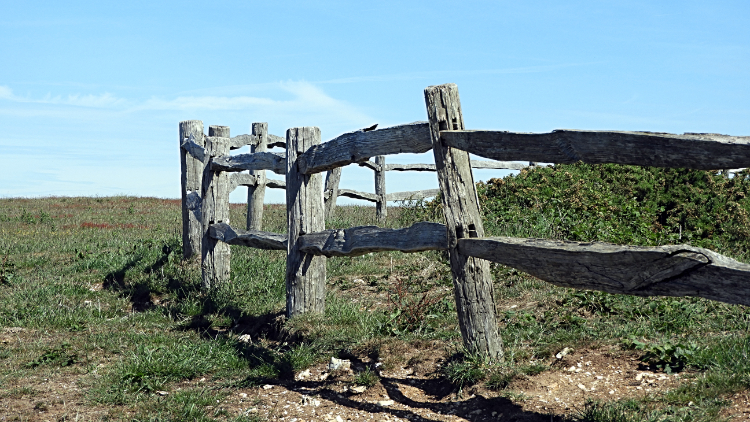 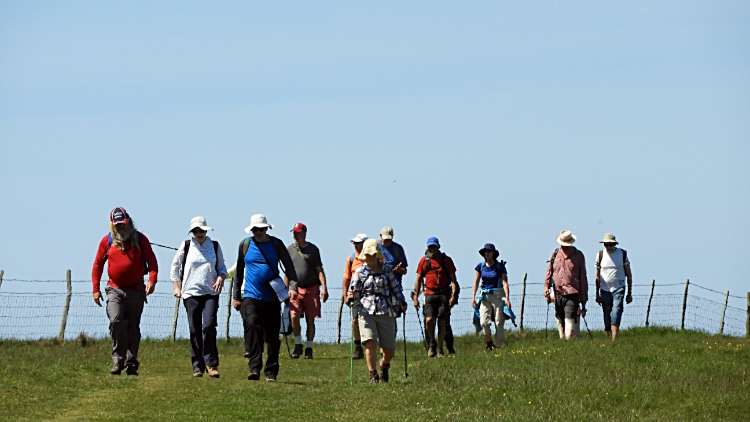 From the most hellish mile of the South Downs Way I came to yet another spectacular section of upland walking. The path curved around the very top of Swanborough Hill and as I walked it I passed paths leading up to the Downs on my right. The first was Dencher Road and the second was Breach Road. Walkers headed up and down both, coming from and in the direction of the village of Kingston near Lewes. Beyond the village was the historic town of Lewes which was just a couple of miles away to the north-east. Lewes Castle was easily distinguishable as was the vast inland chalk cliff of Lewes Down. I was also drawn to look at the white painted Ashcombe Windmill situated directly between Kingston near Lewes and Lewes. Back on my walk I passed Lewes Dew Pond which was dry and I also passed quite a few walkers, a few individuals, some couples, some small groups and one larger group of Sussex Ramblers. It was still only ten in the morning but by now on a balmy Saturday morning they were coming out and climbing to enjoy the perfect day too. On Jugg's Road Track, soon after passing the Dew Pond and the Ramblers I found a lone Hawthorn by the path which offered some shade from the sun. I took a fifteen minute refreshment break. I had covered over eleven miles in five and a half hours and needed the rest before the second half of the day. 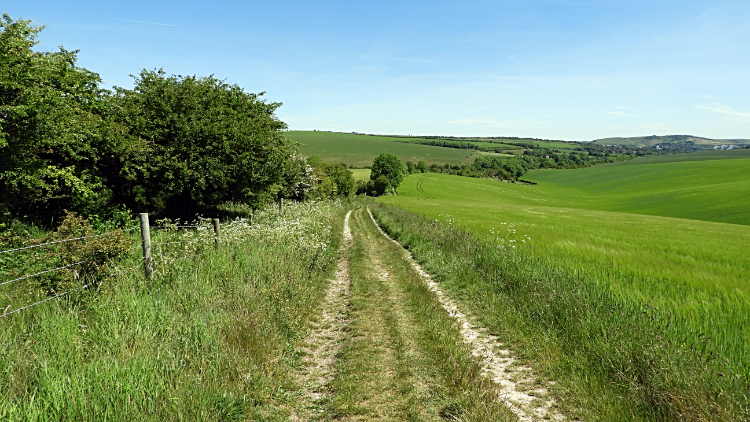 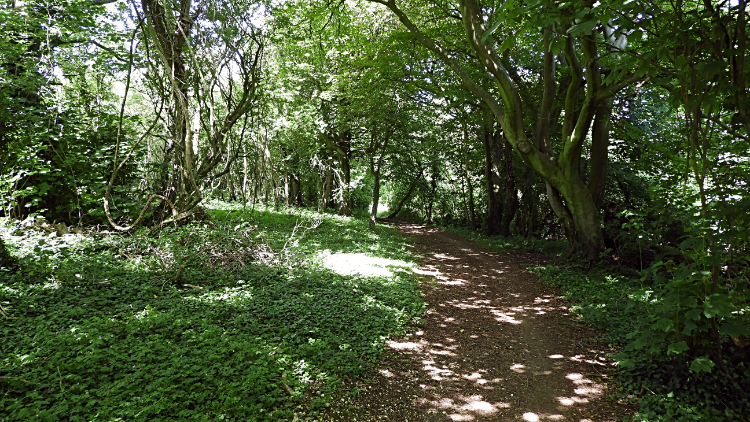 The next phase of my journey was rounding the spacious bowl of Cold Coombes. Walking around it was one and a half miles of distance whereas a straight crossing would have saved a mile. The only problem was no path across cultivated arable grass fields. It was tempting though. I went around in just half an hour. i must have been pushing it. Next came a stretch of walking on a narrow path besides a copse and besides a railway line which led me to the crossing of the busy A27 at Housedean Farm. It was getting towards midday here and my was it hot. I was thankful for some shade under trees and for a water point provided for South Downs Way walkers at Housedean Farm. I took a drink and topped up my bottles, not knowing where the next water stop would be. From the A27 I huffed and puffed up Long Hill, just 80 meters or so but draining in the heat. Relief came by tracking downhill a little through Bunkershill Plantation but that loss of height had to be regained with a gradual climb of 160 meters over the next five miles, all the way to Ditchling Beacon. And with it being mile 14 to mile 19 of my day it was tougher than it normally would. 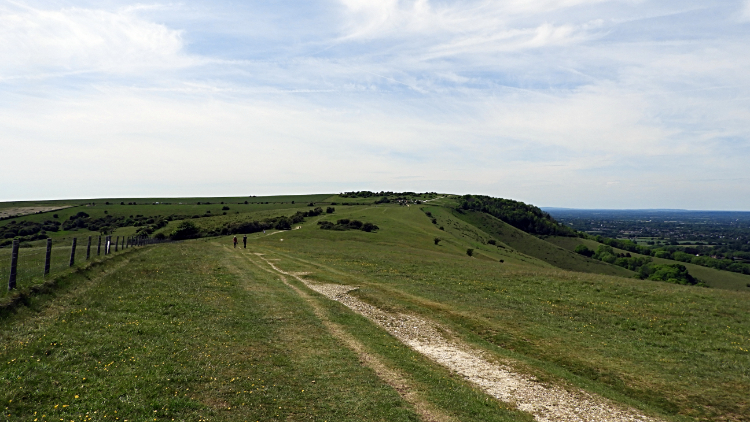 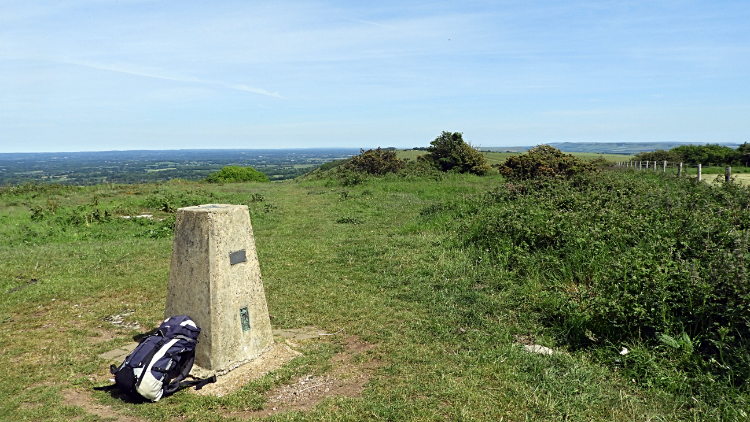 I was drained by the heat burning down on me from the midday sun which I had no shelter from and I was drained from the previous fourteen miles of walking. I was thrilled all the same. Who would not be on such a lovely day and walking in lovely scenery. It was just that I was slowing from being tired and while I had been agile and taken to gamboling on the Downs between Firle Beacon and the Ouse Valley I was now hunched and languid. It was very tough going and it was going to take me three hours to cover the five miles to Ditchling Beacon. I even rested for a while at Blackcap Hill, laying flat on the grass and not moving until my heavy panting became a restful breath. I needed ten minutes of recovery to walk across Plumpton Plain to the Beacon. Eventually I passed the National Trust sign dedicated by Sir Stephen Demetriadi to his son which welcomed me to Ditchling Beacon. I had another mile to walk to reach the trig point at the summit though, another ponderous mile. People were walking about the open spaces of the site, most with more vigour than me. Not surprising really, the majority of them had just got out of cars at the Ditchling Beacon car park. I had walked nigh on twenty miles, the second half of them in stifling heat. I stood at the trig point, 248 meters up and I was ecstatic. Some energy returned, enough to get me down from the Beacon to the village of Ditchling where I was accommodated for the night. I walked down to the village by way of Ditchling Beacon Nature Reserve and found my home for the night by the roadside leading into the village. My host told me of her friend Vera Lynn who also lives in Ditchling. She also pointed me to a good pub in town where I later had lunch and a couple of beers. By golly, I enjoyed them.

From my evening Facebook Post "Twenty miles and nine hours since setting off this morning I finally reached Ditchling Beacon. The heat was stifling and I have to admit the last five miles seemed like an eternity. Funny isn't it. As you grow older years seem shorter while on a long day walk each mile seems progressively longer! A good day though, Skylarks sung for me all morning and I saw my first Adonis Blue Butterflies. Beautiful they are. In the White Horse, Ditchling now drinking a pint of Village Idiot. The pub is just getting set to serve food. I am ready for my dinner."