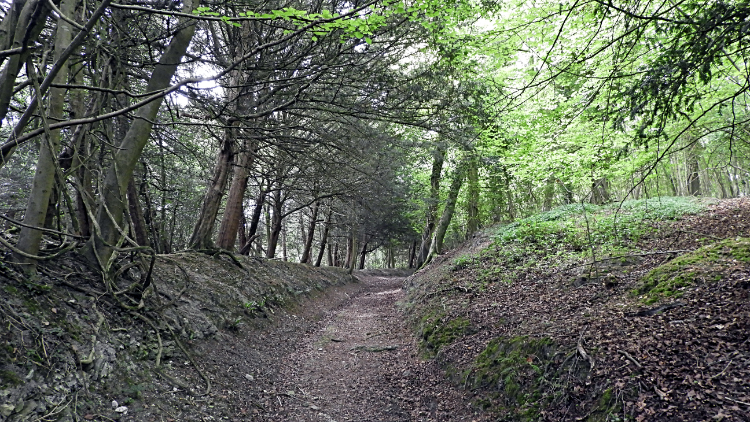 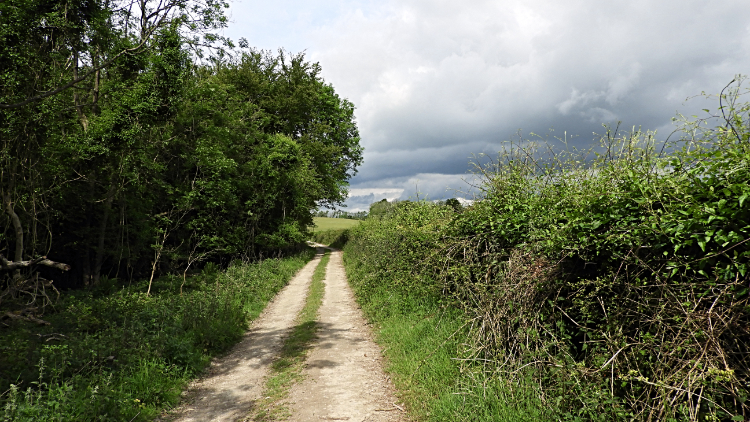 On the West Sussex Literary Trail

At least the rain had stopped. I left Graffham at a little after eight in the morning in the dry and in the knowledge that there would be spells of cloud and sunny intervals and without rain. That would do. In fact it was sunny as I tracked back from Graffham to Graffham Downs Reserve along the same tarmac road I had walked in the wet yesterday. Once in the reserve I followed a good path which became a Hollyway further up the climb to the South Downs Way. It was a tough climb back up, all of 130 unrelenting meters. Nothing to a younger me but now I have spent a few years in my sixties the climbs are a little harder than before. No worries though, I just have to be a little more patient on the climbs these days. Back up top I rejoined the South Downs Way and in doing so I also walked part of the West Sussex Literary Trail which I stayed with for a mile until it parted with the South Downs Way at Heyshott Down. It was gorgeous here, a wild uncut meadow of wispy grasses and wild flowers. 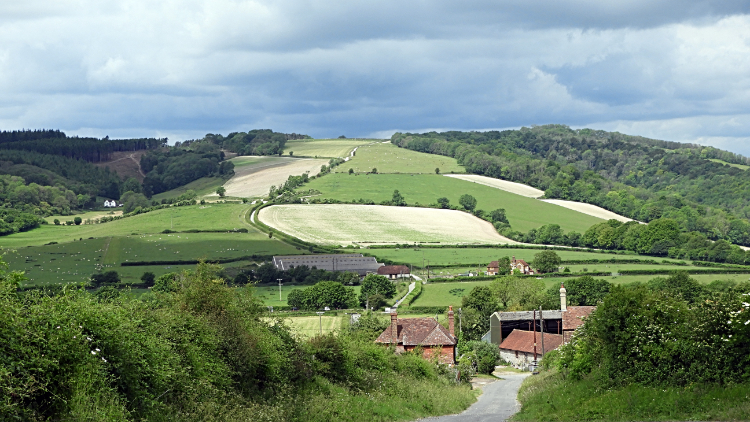 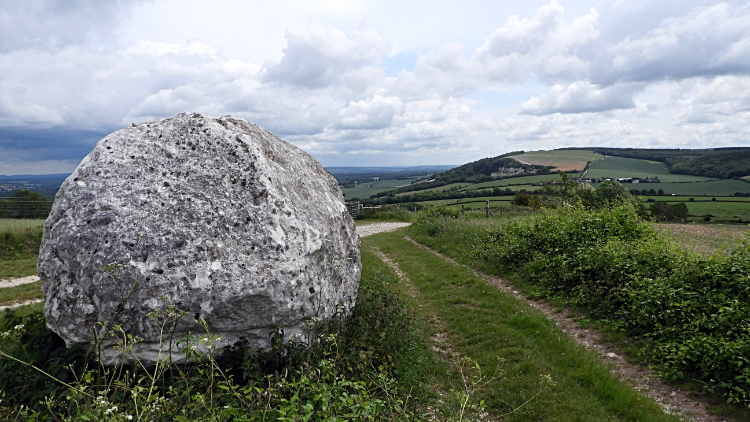 Looking back to Manorfarm Down

One feature of the South Downs Way I had not noticed was the number of major roads I had crossed. Quite naturally there are roads filtering from London and the Home Counties to the honeypot resorts of the Sussex coast. Some of these resorts including Seaford, Brighton, Shoreham, Worthing, Littlehampton and Bognor Regis were now behind me. I had walked the South Downs in almost a parallel line to the coastline and at less than ten miles distance so far though I was now drawing myself away from the coast with every step towards my goal in Winchester. Anyway, here I was leaving Heyshott Down and heading down to yet another road crossing, this time of the A286 Chichester and Manhood Peninsula road. So down I went for 120 meters before crossing the road and climbing the 120 meters and a bit more up Cocking Down to Linch Ball where a trig pillar marked the height of 248 meters. 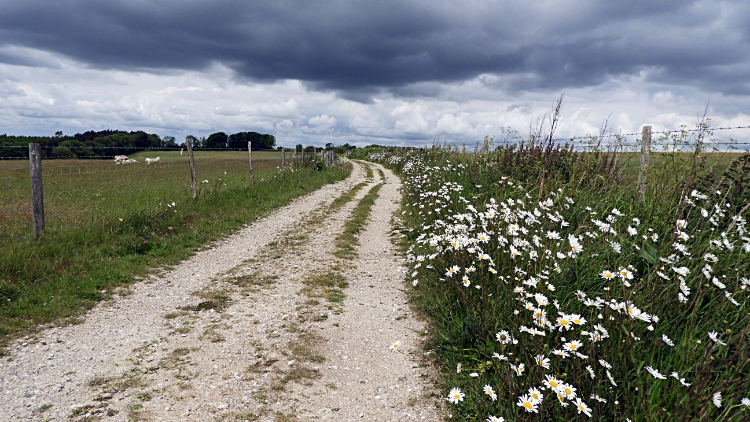 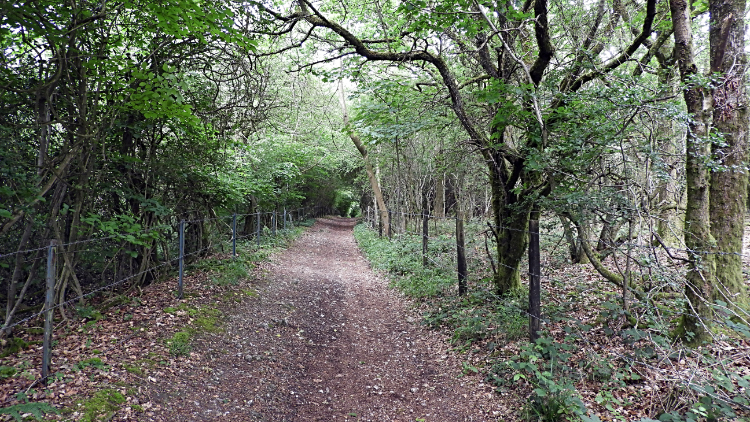 From Linch Ball there followed a most delightful couple of miles walking on the South Downs Way bridleway across Didling Hill. It was splendid, magical even as I walked past swathes of flowering Daisies on either side of the way and then with even more Daisy flowers filling the neighbouring fields. More enchanting still, the sun popped out from behind some grey clouds and heightened the colour. My walk over Didling Hill was unforgettable. Mesmerising is an appropriate description. From Didling Hill I continued on across the high ground, no dips to roads for now, just gentle undulations, to arrive in the cover of Monkton Copse. 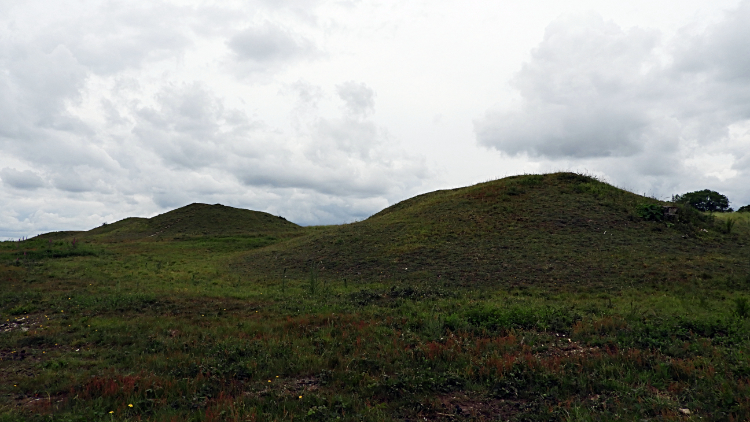 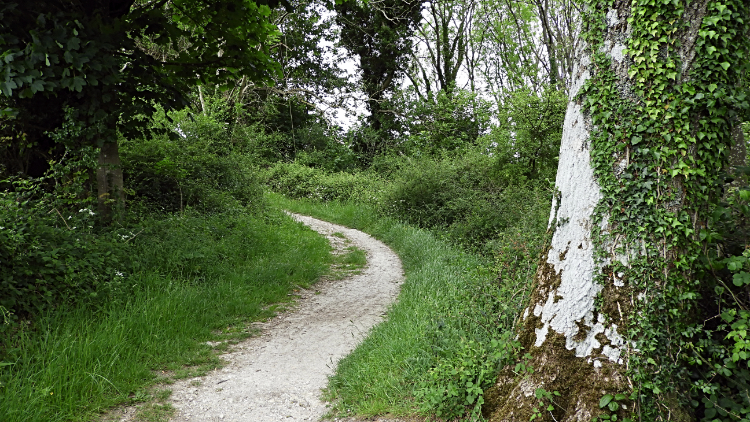 South Downs Way near Philliswood Down

In Monkton Copse a sign caught my interest. It read 'Devils Jumps'. Further description explained them to be Bronze Age burial mounds. I was getting the feeling this western half of the walk had a familiar feel to my walk on the Ridgeway a few years earlier. It was also a walk of coming across ancient sites on the high ground. Iron Age, Bronze Age and even further back to the Neolithic seemed to like showing off their tombs by displaying them on high ground. I suppose they had sight of the heavens; an easier journey to the next life? Perhaps. Anyway I took a look around the site of Devil's Jumps, a series of five bell barrows sat atop the hills near the village of Treyford. Then back on the path I came to another memorial, this one much more recent. I was surprised to see it was for Hauptmann Joseph Oestermann, a German Airman killed during the Battle of Britain. It was respectfully festooned with Poppies and crosses. After my moments at the two neighbouring memorial sites I returned to the present and resumed my present day walk by heading from Monkton Copse to Philliswood Down. 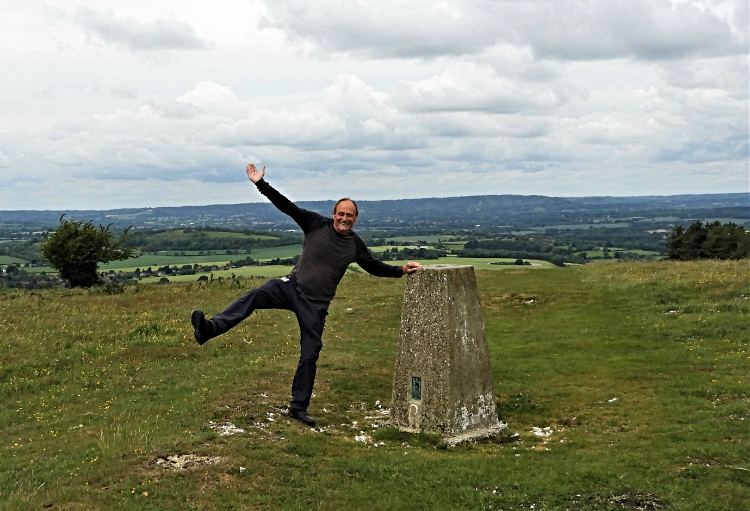 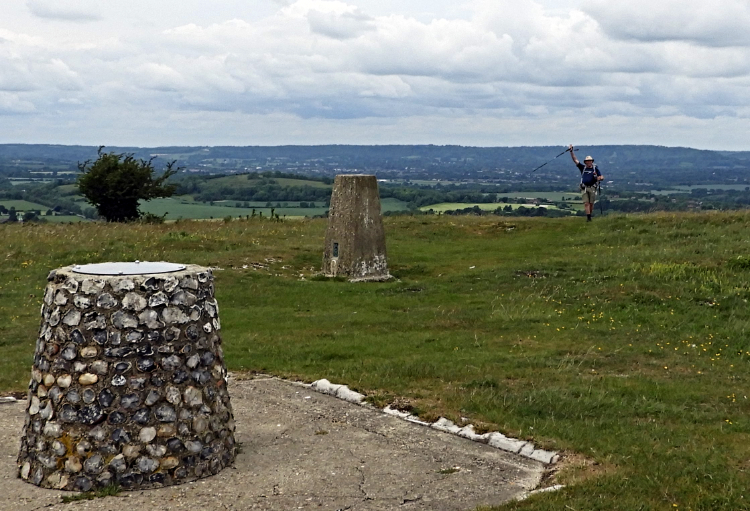 After dropping down a little from Philliswood Down to Buriton Farm I climbed again to first Pen Hill and then to Beacon Hill, a pair of distinctive round topped hills on the way. Pen Hill stands at 215 meters and looks up to Beacon Hill at 242 meters. Between the two is a sharp little up and down and while in the gap between the two I looked to see a fellow with a backpack striving up the slope. I had first seen him at the bottom as I had crested Pen Hill. About fifty meters behind him I hauled myself up to the summit of Beacon Hill and noticed he was still there resting at the top. I shall now let my Facebook post I wrote in the evening tell the story of our meeting "Thanks to Lancashire Lad for this picture of me on top of Beacon Hill on the South Downs Way today. We had a right laugh chatting. He has recently returned to long distance walking after recovering from cruciate ligament injury and most recently having a metal pin removed from the area of injury so well done to him. If you read this, cheers my friend. I had another lovely day walking the trail, six of eight done now. The sun came out often, it never rained, I saw oceans of flowers, I spotted Red and Black Day Flying Burnet Moths which looked nothing like a moth, I found a Dew Pond with water in it for the first time on this trail, I met lots more nice people and I enjoyed lots more tremendous views. All is good.". Anyway, we had a right laugh. Fancy meeting a fellow northerner up here and such a great guy too. Cheers Stephen, I shall not forget our fun meeting on Beacon Hill. 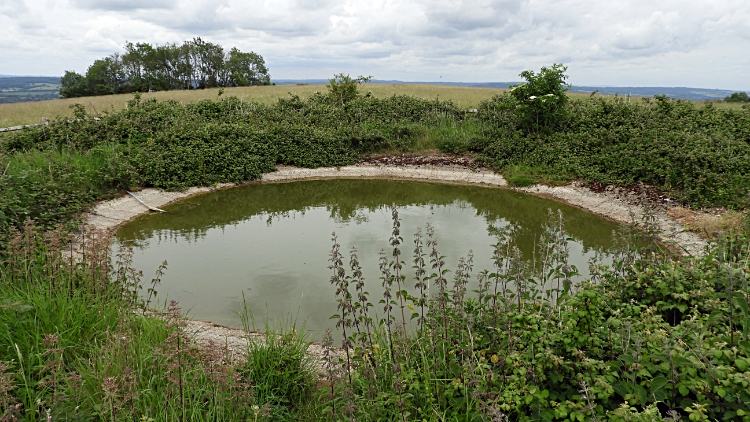 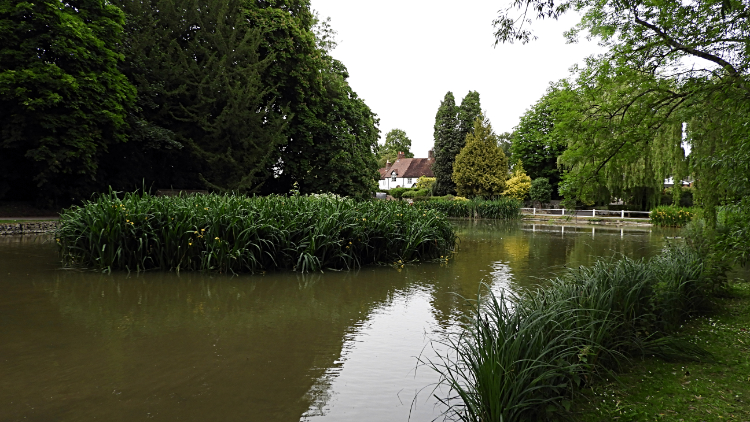 The village pond in Buriton

After Beacon Hill I enjoyed another down to Bramshott Bottom and up to Harting Downs where I found quite a few people wandering about on the hill top. I also found the best preserved Dew Pond of my South Downs walk, this one actually holding water. Then again, there was a blue plastic water pipe leading across the hill to keep it topped up. The Red and Black Day Flying Burnet Moths I had first seen on Beacon Hill were here on Harting Downs too. It was a pleasure on Harting Downs, i also had a good view down to the village of South Harting with the copper spire of St Mary and St Gabriel church being a draw to the eye. Taking my leave of Harting Down I headed west on Forty Acre Lane to Cockshot Wood where I left the South Downs Way and headed on the Milky Way footpath through the woodland towards the village of Buriton where I was billeted for the night. Buriton was lovely. The village pond set near the village church was a delightful spot to rest before I wandered the pretty streets to find my accommodation at the Village Inn. A top chef provided a masterly dinner which I enjoyed with a couple of pints while contemplating the next stage of my walk. Only two stages to go. So I thought as I enjoyed my final pint. However I had just seen the horrendous weather forecast for the second day. Could I?