The Walk: Sod it. Go baby go, I thought to myself. It was a lovely sunny morning and set fair all day. Tomorrow could not be more different with a deep low pressure setting in overnight with heavy rain forecast for most of the day. "I am not going to finish this spectacular walk in that. I am going for it". And so with the decision already made I set off on what was now my final stage of the South Downs Way. I had planned for two stages from Buriton to Winchester with the break coming in the Meon Valley. Plans change. 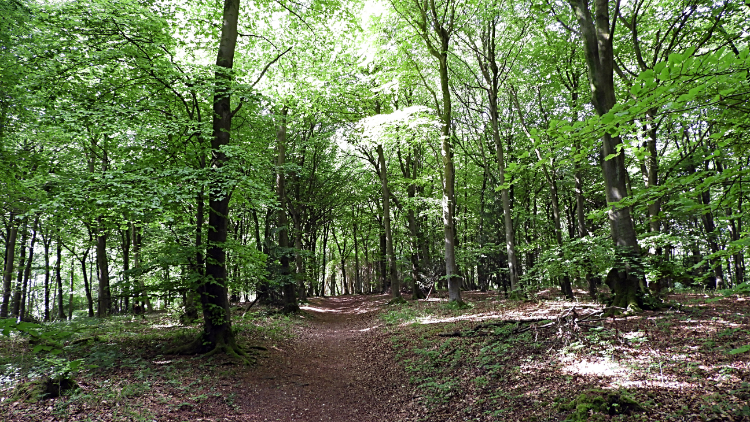 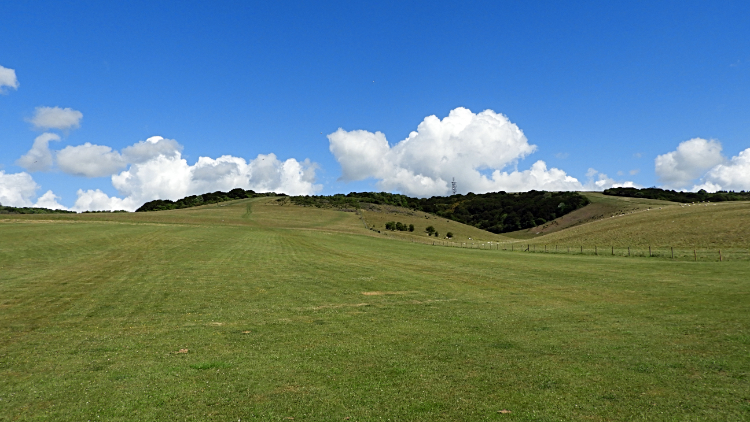 I had a marathon walk ahead of me but still I set off with a spring in my step, leaving Buriton at eight on the dot and climbing up the steep road leading to Queen Elizabeth Country Park. In the woodland park I joined the Shipwright's Way, one of the many paths which runs in part concurrently with the South Downs Way. A ship's wheel was the logo pointing the way. The woodland walk was lovely and there were a number of paths I could take, most running parallel to each other on different heights, all going the same way. I joined the Hangar's Way for a bit of walking too but not the Staunton Way, though I did cross the line of it, eventually arriving at the Queen Elizabeth Country Park Visitor Centre. A large marquee was being erected as I walked on by. It was just approaching 9.00am. Oh, I also followed the Space Trail in the park, passing Mercury and Jupiter. From the out of world walking I passed under the busy A3 to reach Hillhampton Bottom which heralded a refreshing climb over wide sprawling meadows to Butser Hill. During the climb I stopped at a gate to watch a Linnet perched on barbed wire by a gate entertain me. It was yet another of those unexpected wildlife encounters I enjoy on my walks. They are always a thrill. Once on top of Butser Hill I enjoyed spectacular views to the west, in the direction I was going to the end of the walk. 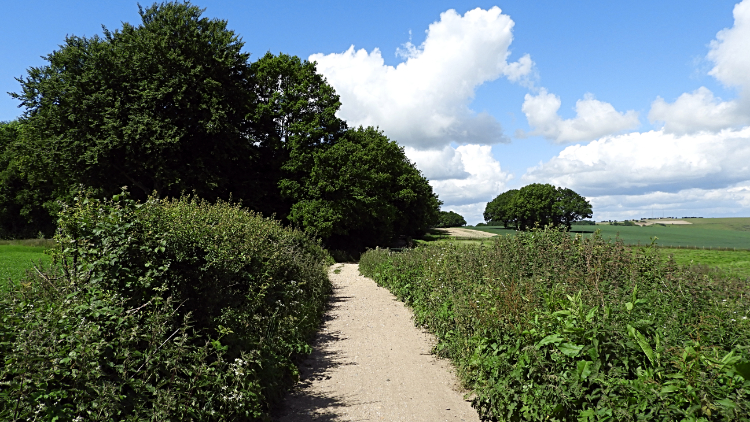 The path to Hyden Cross 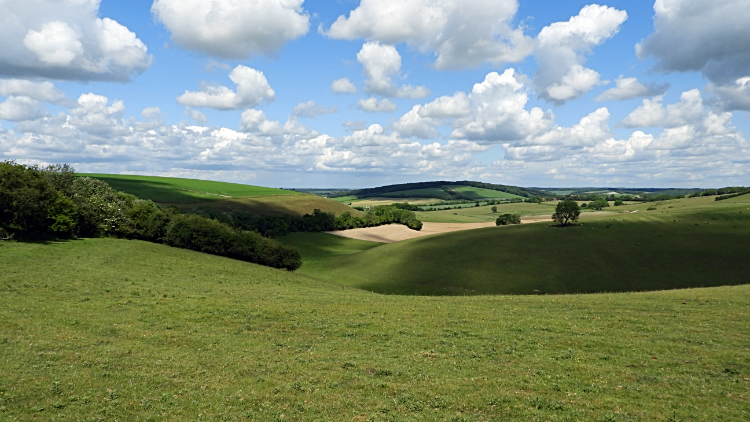 I made my way from Butser Hill heading first south-west along Limekiln Lane and then due west past Tegdown Hill and Hyden Hill to Hyden Cross. Though it was warm and warming still towards midday the going was good and I felt really fit. I usually do towards the end of long distance walks though sometimes I have overdone it and limped home. "Not this time." I thought. The going was different after Butser Hill. The feel of the walk was different. I knew I had left the true South Downs and that I was walking across lower farmlands now. Which I was. I arrived in Hyden Cross and continued a little further to Mercury Park where i came to the Sustainability Centre. It looked interesting so I popped into the grounds and I was delighted when I found a sign for a cafe. I had been going two and a half hours and I had covered six miles on a hot day. I needed a break. And I was delighted when I found the cafe; after ordering coffee, crisps and cake and after paying less than two pounds I sat on a bench outside to enjoy my twenty minute break. It was just what I needed for the next stage. After leaving the center I headed along a tarmac road a little way before exiting to a B road, soon after leaving tarmac to skirt around the bottom of Coombe Down on a course for Old Winchester Hill. 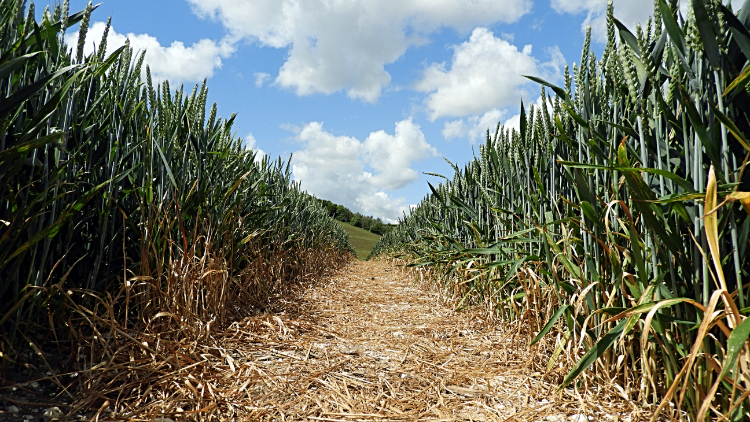 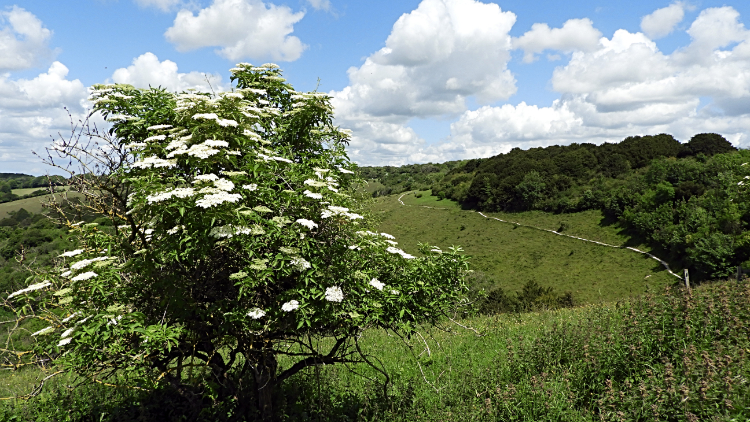 A generous path across the middle of a grain field led me from Coombe Down to another minor tarmac road which thankfully I was not on long before leaving. Back on unmade path I walked to the ancient site of Old Winchester Hill Fort. It was time to drop the backpack by the side of the path and have an explore. The site of the ancient fort is impressive and the views all around would have made sure any folk up here would have seen any undesirables or even welcome visitors coming from a mile off. So they would have had plenty of time to prepare for defence or to prepare for the party. Let us imagine it was the latter. After a while I decided it was time to go. While I had now covered just short of ten miles I still had fifteen to go. And it started with a long descent from Old Winchester Hill to the valley of the River Meon. 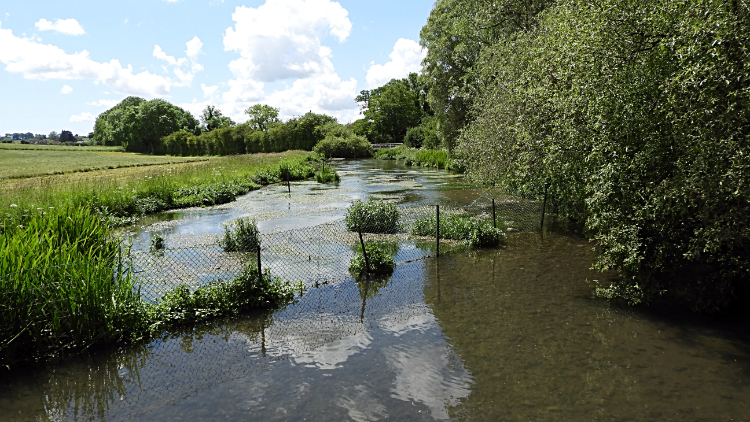 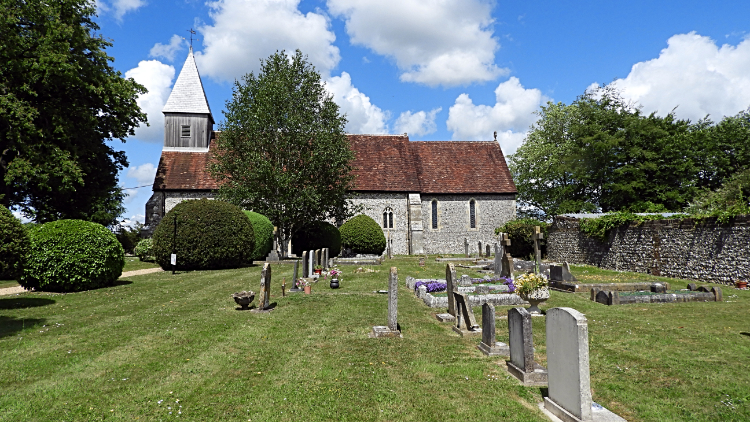 Wispy white clouds and lots of sun were my perfect tableau in the sky as I ambled down the field side lanes from Old Winchester Hill to Exton. It was the most delightful mile and a half stroll to the crossing of a disused railway line and on to the crossing of the River Meon which heralded my arrival in the ultra gorgeous Hampshire village of Exton. Everything was pretty and the village pristine clean. There was no litter to be seen anywhere. I walked past the lovely village church and I walked along a pretty street of houses, some with thatched roofs, all having well loved and attended gardens. I arrived at the village pub, the Shoe in Exton and noticed lots of people enjoying lunch in the pub's beer garden. There was a terrace in front of the pub too and seeing an empty table I took to it. Having deposited my backpack on a chair I went inside and ordered a pint of Orange and Lemonade, my favourite walking daytime quencher. Being the last day and with it being a little after 1.00pm I ordered a Ploughman's Lunch. While meal orders finished at one the bar staff took pity on the weary foot traveller and looked after me. I sat on the terrace enjoying my pub lunch for over an half hour. It was delicious. I left the Shoe at a few minutes before two. I was halfway, twelve miles down and twelve to go. 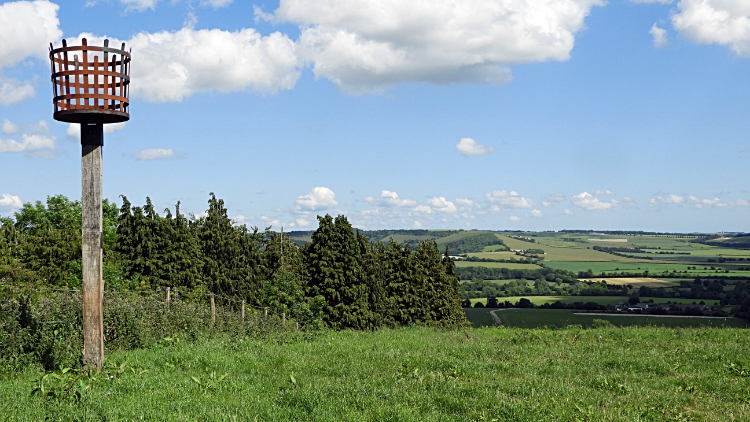 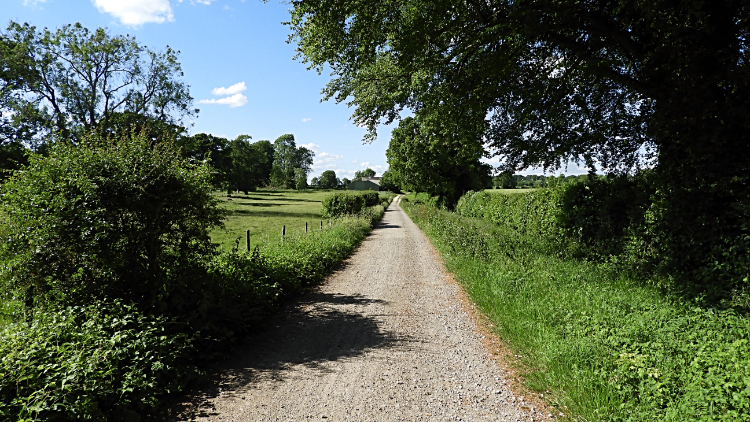 Next up was my last significant climb of the South Downs Way, an uphill haul to Beacon Hill. No deja Vu, this is not the one I met Lancashire Lad on yesterday, it is another one. On the way up I stopped to chat with a couple who were watching Red Kites circling in the sky nearby. We agreed they are such graceful birds. On I went after birdwatch, completing the climb and not stopping. I had a mind to keep going now. Next up was a walk on long farm lanes and just after passing the site of the Medieval village of Lomer I stopped by the wayside to take off my boots and change to dry socks. My feet were beginning to overheat so I sprayed some Deep Freeze on too. It always helps. I was okay and I wanted to stay that way. Soon after came the long arduous two miles straight line of Holden Lane. Straight, on a farm access way between farmed fields is not the best of fun. The good thing though was it took me to the point of just six miles to go. 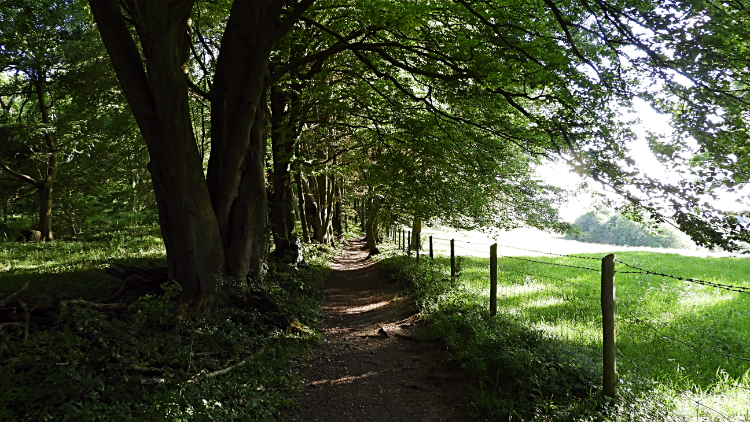 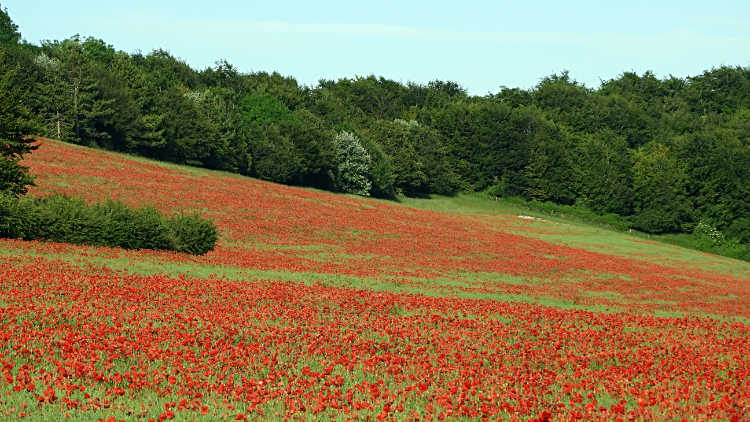 I was homing in on the finish now. There were still over five miles to go as I crossed Gander Down and followed the King's Way towards Winchester. Though I could not see my goal I knew I was drawing closer. The views east from King's Way to the valley of the River Itchen were a delight; a spur to draw me on towards the conclusion. On this stretch I also planned a taxi to take me to my accommodation back in Exton and to take me from Exton to Winchester Railway Station the next day. A necessary task following my change of plan. Job done, views enjoyed, I arrived at Cheesefoot Head by way of Temple Valley and Great Clump. Cheesefoot Head is a natural amphitheatre offering great views but I forged on to even better ones at the other side when heading down to Chilcomb. Vast Poppy fields, all in full bloom were such a thrill. A lady walking her dog who I had met on the way down from Cheesefoot Head had said "You are in for a treat around the corner". I had asked "What do you mean?", to which she had added "Just look in the fields to your left in about 100 yards or so". She was not kidding. It was such a brilliant natural finale to my walk on the South Downs Way for I was now all but done. 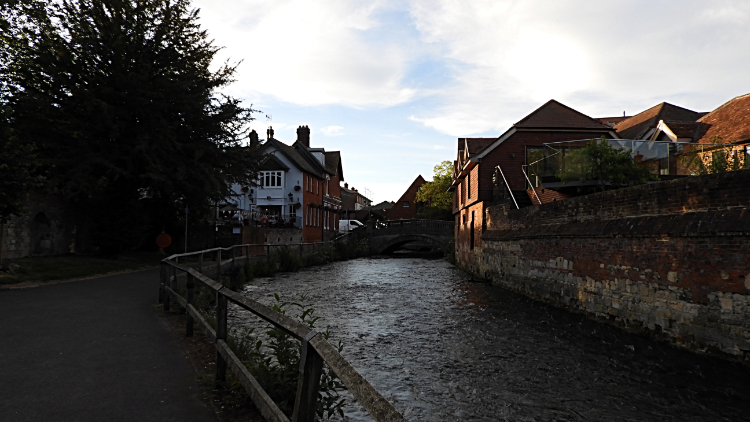 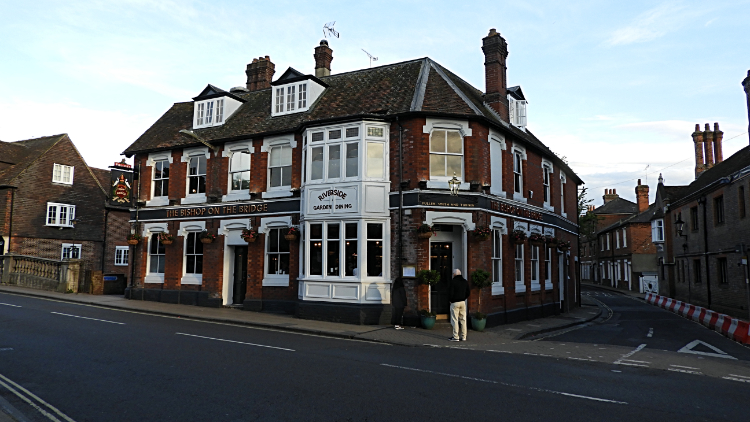 The end of the South Downs Way

After spending fifteen minutes admiring the Poppy fields I walked on to the small village of Chilcomb, walking through at six in the evening. I had been walking ten hours, barring refreshment breaks, and I had covered twenty two and a half miles. And I still had just short of three miles to go which I have to admit were done at a slowing pace. The distance, the accumulated altitude, the heat of the day and the thorough enjoyment had all but sapped me by now. The last long field from Chilcomb Lane to the crossing of the M3 footbridge was not fun and afterwards I walked as briskly as I could through the streets of Winchester into the town center. Interesting sights on the way through town included Wolvesey Castle, the River Itchen walk, the Cathedral and of course the impressive statue of King Alfred which marked the end of my South Downs Way. What a journey it was, so memorable so brilliant. However now I could not think too much about it. I was tired. I was spent. I found a pub and waited for my taxi to arrive while enjoying a beer and another bag of peanuts; dry roasted this time. "Fancy doing the quiz?" someone asked.

Next morning I returned to Winchester to catch the train. It was absolutely pouring down. I was so glad I had walked the twenty five and a bit miles in one go after all. On my train journey to family in South Wales I reflected more on the walk of the South Downs over the last week. The glory of the start and the brilliant white of the cliffs at Beachy Head and Seven Sisters. Of the air squadrons preparing for D-Day 75th anniversary celebrations. Of the beautiful villages I visited. Of the lovely rolling South Downs. Of my wonderful hosts, all of them without an exception. Of the lovely weather. Of lovely meetings on the way. And last and not least of my beloved late father. "This one was for you Dad."