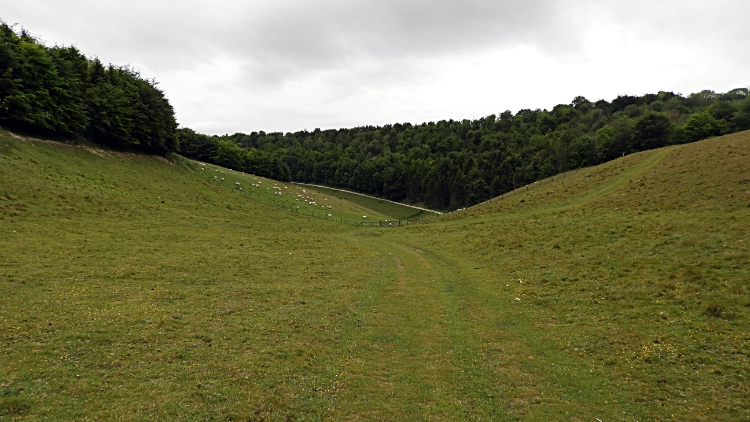 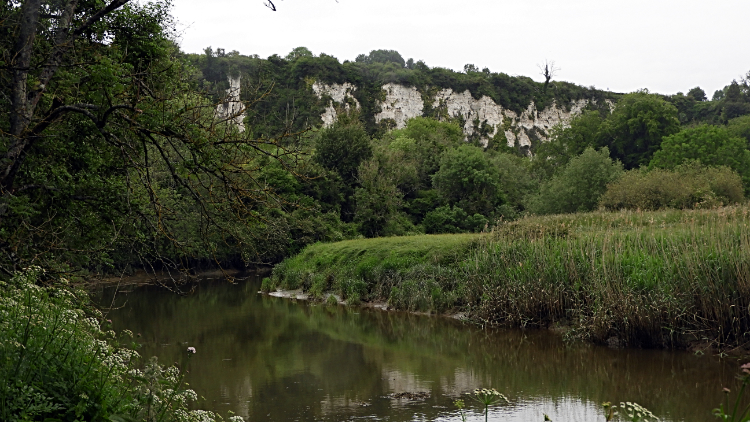 The sunshine I had enjoyed for the first four days of my South Downs Way walk was gone. And there was not much chance of seeing it today. The forecast was grim. It was dry as I walked out of Arundel but showers were already coming and going as I walked on a course due north through Arundel Park towards the village of Houghton and where I would rejoin the course of the South Downs Way. I had not missed out much of it, just five miles or so between Rackham Hill and Houghton. When I reached the village by way of Arundel Park's breasted valleys and by walking a final stretch of path alongside the River Arun I decided it was not the type of place I would fancy living. 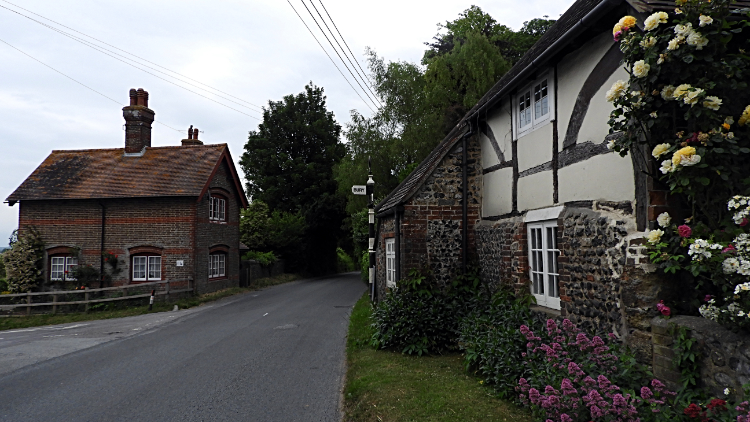 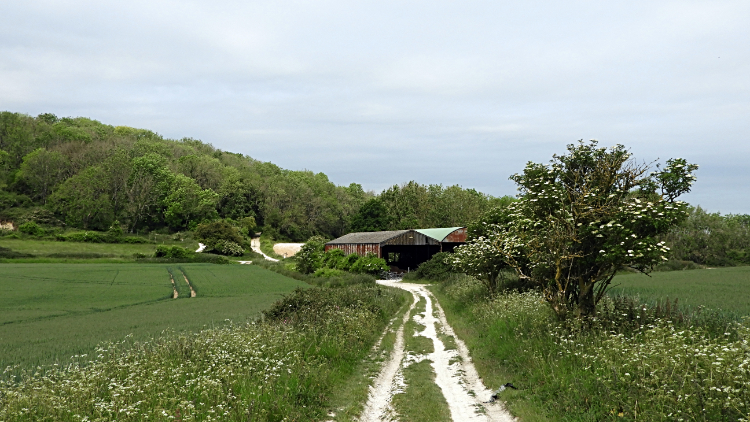 All the houses of Houghton are set beside a busy road and there was not a footpath within it. Nobody was about; there was nowhere to go. Except by following the Monarch's Way westwards or by tracking up the B road northwards to join the South Downs Way. Which I did. I was relieved to rejoin it and leave the tarmac behind. Now the South Downs Way lead me westwards to the side of Coombe Wood, then across the A29 and then continued westwards towards Westburton Hill. I took a detour though, to visit the trig point on Bury Hill, 178 meters high. It was ingloriously crammed in between field and farm access lane and surrounded by a roll of chicken wire. I tapped the trig point for luck, took a photograph for my records and rejoined the South Downs Way. Approaching Westburton Hill I looked up to the sky in delight. The sun did come out. For about thirty seconds, the sum total of the day. 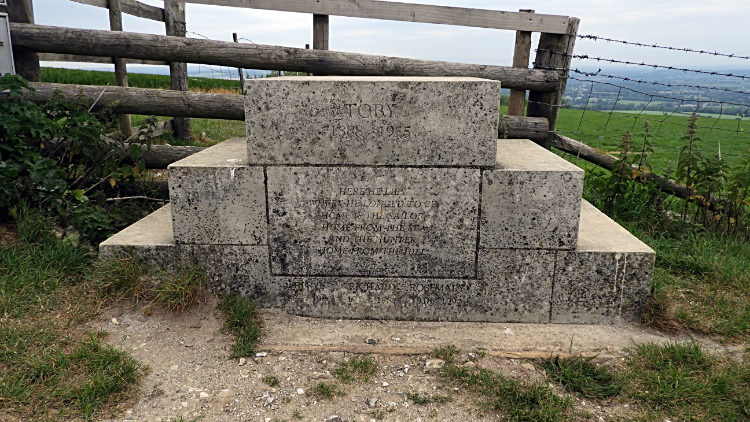 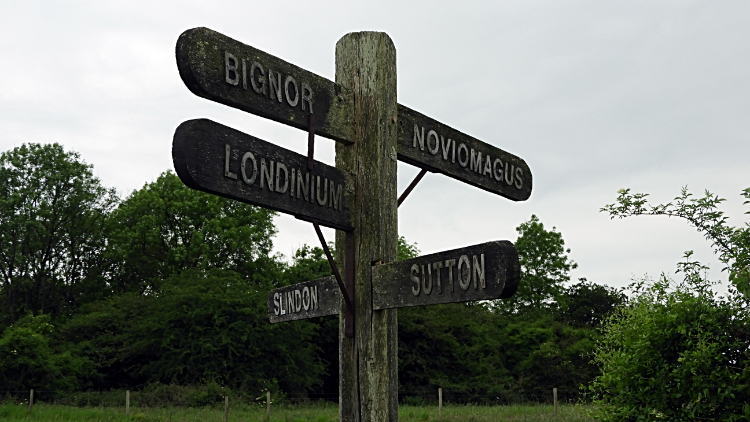 From Westburton Hill, 186 meters at its top I climbed further to Bignor Hill, 225 meters high. Between the two I met a chap walking in the opposite direction to me. He was on a local circular walk and mentioned to me that he walks much of the South Downs in such a way. As would I if I lived around here. On Bignor Hill itself I came to Toby's Stone, a horseman's mounting block commemorating huntsman James Wentworth-Fitzwilliam. On finding out more about the stone I read a piece stating 'the monument has senselessly and repeatedly been vandalised by those joyful champions of free speech, liberty and tolerance - anti-hunting protesters'. My view? While not being a fan of hunting I am not sure about the need to vandalise an inanimate object of interest. Hunting is part of history after all, like it or not, and even more so in more ancient times. And it was a more ancient place I came to next as from leaving Bignor Hill I was unknowing walking along Stane Street, an ancient Roman road. I came to a crossroads. The signpost gave me the options of Londinium, Bignor, Slindon, Sutton or Noviomagus. I fancied seeking out Noviomagus but it was not on my way. A more useful sign nearby pointed to Cocking Hill, seven miles further on. That was my route. It was around these two signs that the South Downs Way and Monarchs Way which I had also been following on and off met and immediately parted for a final time. The Monarch's Way followed the dead straight line of Stane Street in a south-west direction to terminate in Chichester, eight miles away. I headed north-east. 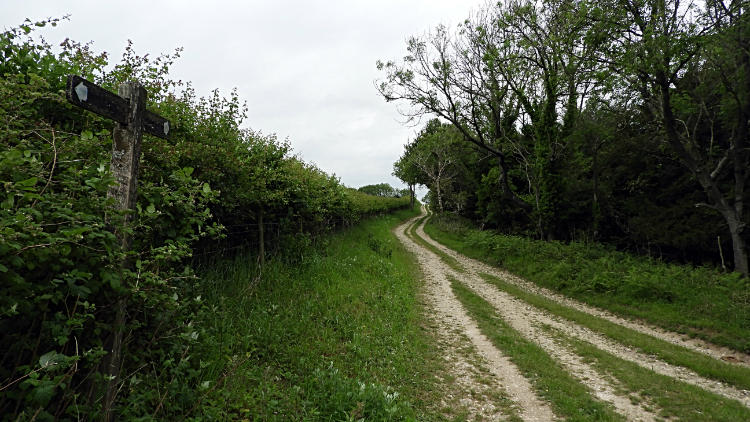 South Downs Way at Sutton Down 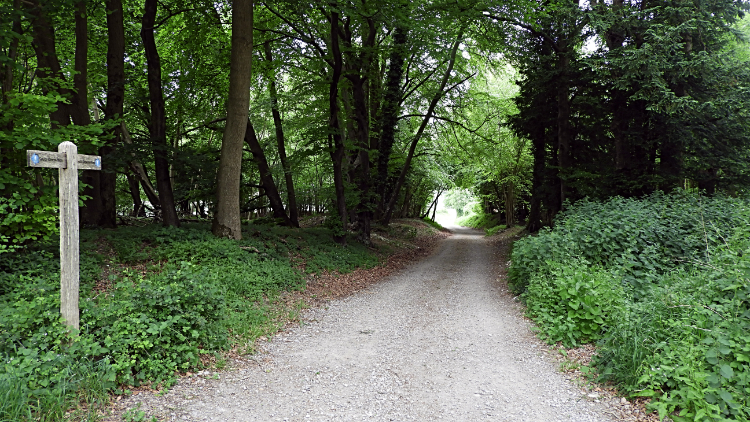 I passed Glatting Beacon and crossed Sutton Down, while doing so meeting first one individual and then a minute later a couple of walkers, all three of them backpacked like me and like me they were also walking the South Downs Way. Albeit in the opposite direction. I found it funny that the first two sets of South Downs Way walkers I had met in four and a bit days happened to be on the same stretch and only about 400 meters apart. Then a little bit further on I met even more groups of South Downs Way walkers. Summing up, there were about ten in total, apart from the first solo traveller all in groups of two ir three. Anyway, after my meetings with fellow travellers it was back to solitary walking as I headed from Sutton Down to Littleton End. I was not to see anyone else. 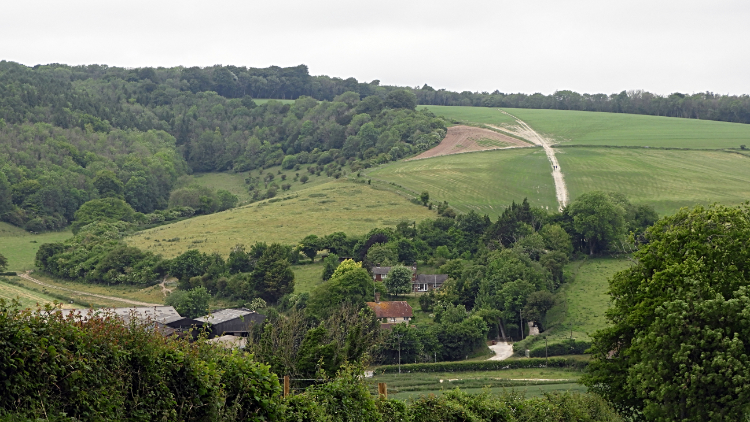 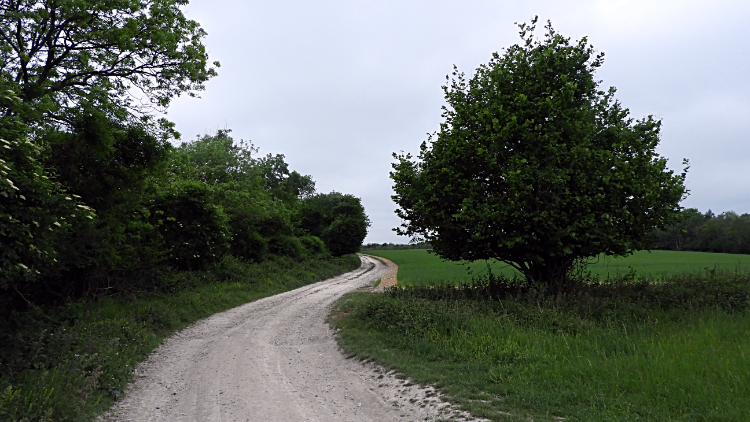 Next I descended from Littleton End to cross the A285 at Littleton Farm before climbing a fairly steep 120 meters height gain to Littleton Down. That was a lot of Littleton's. Next I left the open to track through woodland of Stickingspit Bottom. Why it was called bottom when it was actually on top of a hill befuddled me. From Stickingspit Bottom I walked a little further on the path of the South Downs Way before making my exit to accommodation. While it was only still around 11.30 in the morning I was already heading off towards my destination of Graffham. The bad weather had held its bay but i could sense it was coming and I preferred to shelter when eventually it came. 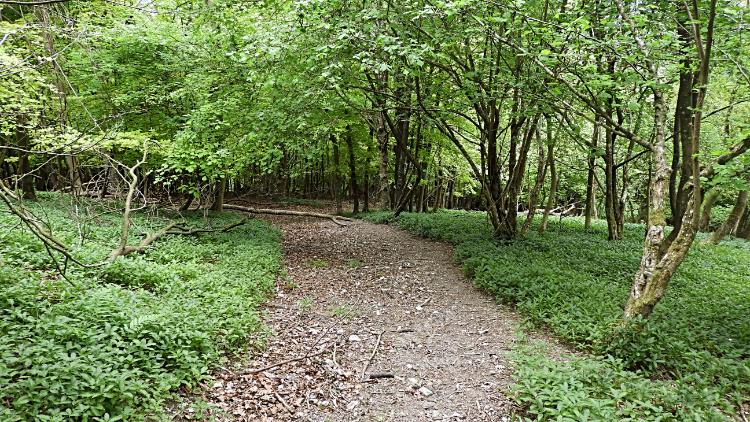 Woodland trail on Graffham Down 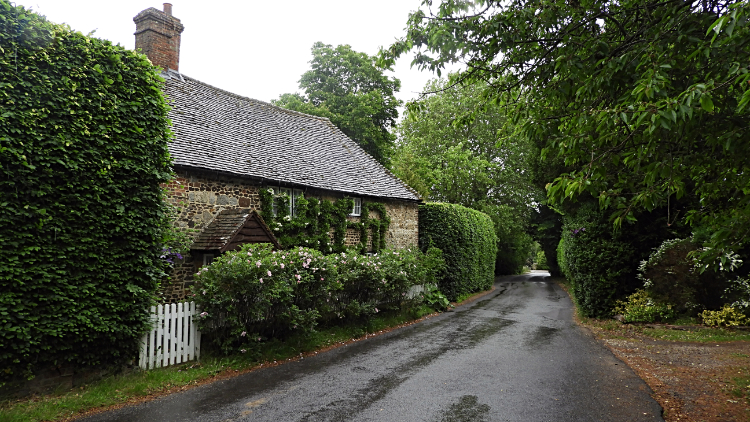 Getting wet in Graffham

I followed a path through lovely old woodland on the descent of Graffham Down towards the village. It was fun meandering on the path through the trees. On the steeper sections I had to slow myself down for I did not want to slip on the loose leaf littered paths. Especially as they were part slimed and wet from the low pressure day. And it was really steep in some parts as I descended about 130 meters in less than a half mile. Then I came to tarmac road leading into Graffham and nearby I headed into the churchyard of St Giles Church. It was such a pretty setting and as it was not yet raining I found a bench to sit down at for lunch. It had just passed noon. While there I called my wife to pass on my regular update; she regularly liked to know how I was getting on. The conversation went something like "I am doing fine sweetheart. Actually I am almost finished for today; I have made haste because it might rain later. And now I am having lunch in a churchyard. You should see the church, it is so pretty... hang on... got to go, it has just started pouring down. Speak later". The rain came quickly and it poured heavily. Unlike yesterday's shower on Chanctonbury Hill when I had not bothered with my wet gear this time I had no option. I packed up and hurried from the churchyard to the shelter of a big Chestnut tree. Out came the full wet gear, trousers and top. Then I waited for the rain to relent a little but it did not. Patience broken I skulked, head down, along the road to Graffham Village Shop which was open. Phew, it had a cafe inside and a covered outdoor area and the staff were so lovely. I bought coffee, cake and the Times which I read in the open area while the rain poured. I was dry though and despite the rain it was still quite warm. I spent a nice hour at the shop reading and relaxing before the rain finally relented and i made my way back down the village to the White Horse Inn where I spent the night. "Great stuff, surely it will be fine tomorrow". I hoped.

From my evening Facebook Post "As it happens I made it to Graffham without any more rain than the early morning shower in Arundel Park but by the time I had walked through the village to my accommodation I was drenched. Oh well, I cannot complain after another great day walking in West Sussex. From Arundel Park I followed the River Arun to Houghton, soon after regaining the South Downs Way National Trail. I then climbed Bury Hill where I detoured to this Trig Pillar, 178 metres high and then headed west to Westburton Hill, then Bignor Hill where Toby's Stone is found. The sun actually shone for a minute up there, otherwise the skies were dark and getting darker as the day went on. Glatting Beacon, high point of the day, 245 metres came next followed by Sutton Down before a long descent to cross the A285 at Littleton Farm. On this stretch I met around 10 South Downs Way walkers, some couples, some solo, all going west to east. From the road I climbed to Littleton Down where I saw industrial clearing of diseased Ash. The tree is really in decline around these parts. Sadly. After Littleton Down and Stickingpits Bottom I left the Downs and headed into Graffham, enjoying lunch in St Giles Churchyard before the heavens opened. "Got to have proper rain on the walk" I thought while huddling under a tree putting my wet gear on. Rightly so."