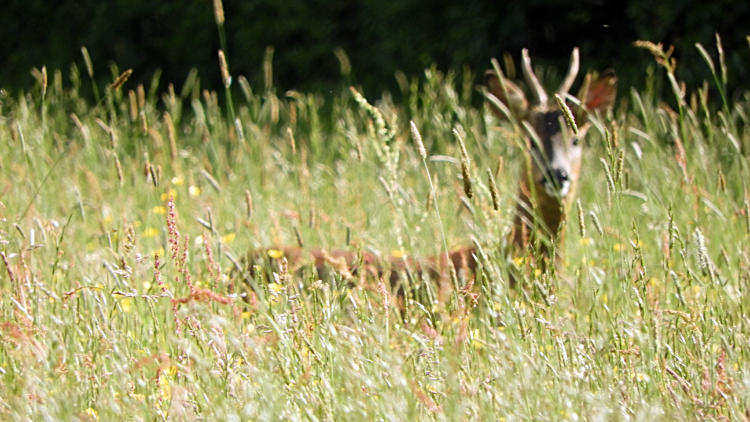 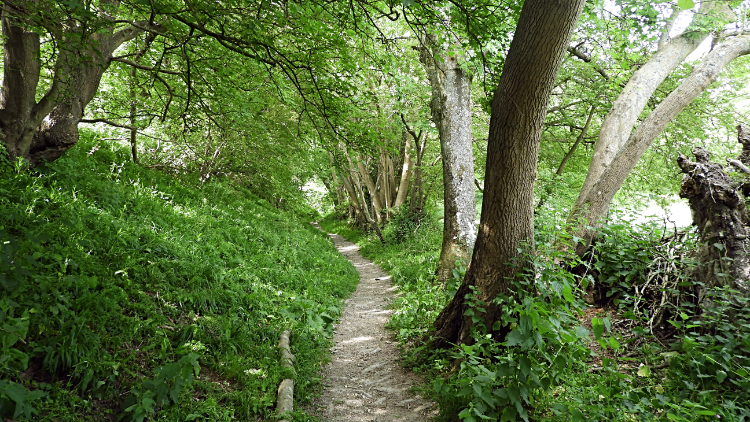 I don't know who was the first to spot the other. Was it the Deer or was it me? Anyway, once we had fixed eyes on each other we did not move. Not an inch. For about a minute. Then, wanting to take the picture, I managed to move stealthily and get this photograph of the beauty looking directly towards me. By then it had worked me out. Moments later it was bounding across the field of waist high grass, leaping high so I could see its path of exit across the field. Then it was gone but what an adventure to start my third day on the South Downs Way. The field in question was one of uncut wild meadow grasses and wild flowers at the back of my accommodation in Ditchling and on the route of the Sussex Border Path leading from the village to Burnhouse Bostall and up to the crest of the South Downs. It was an attractive way with the fields being followed by a stunning woodland trail. 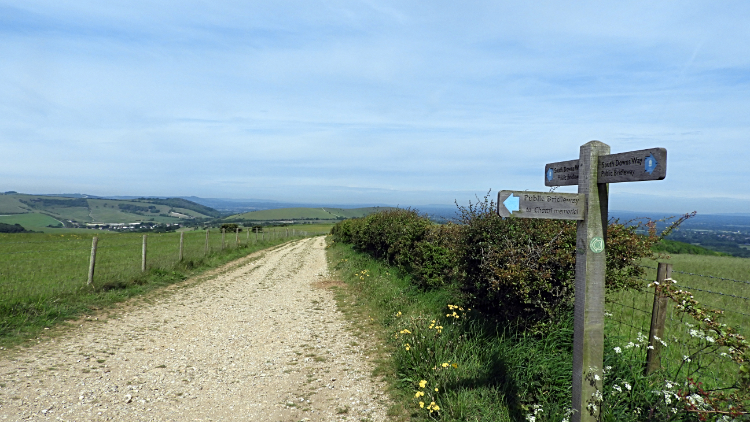 Path to the Clayton Windmills 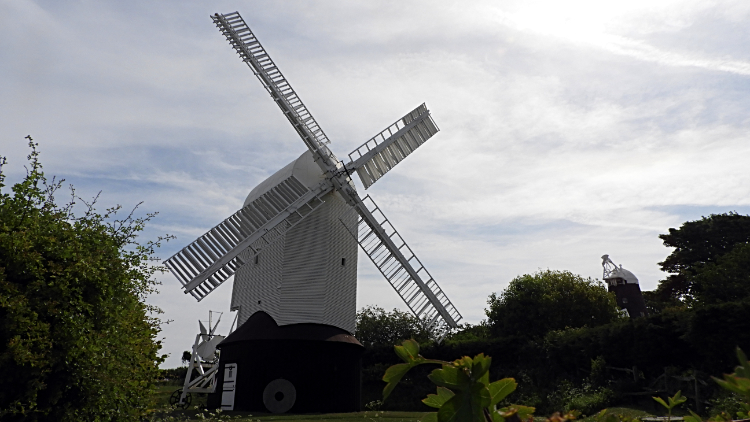 Once I was back on the South Downs Way National Trail just west of Ditchling Beacon I enjoyed a short airy walk of just over a half mile to reach the Clayton Windmills. There are two windmills, named Jack and Jill. Jack is a tower mill and Jill is an earlier design, being a post mill. I had never known there was a difference until reading about them on the site. It was not yet nine in the morning when I arrived at the site but already people were on site and more cars filling the site car park as I looked around. Fifteen minutes after arriving at the site of the Clayton Windmills I was on my way again and heading down from the downs to a crossing point of the A273 by way of New Barn Farm and Pyecombe Golf Club. The farm was interesting for the close up attention of stabling horses and on the walk down through the golf course I stopped a few times to watch golfing groups take their shots. It was a pleasant and sunny Sunday morning after all. 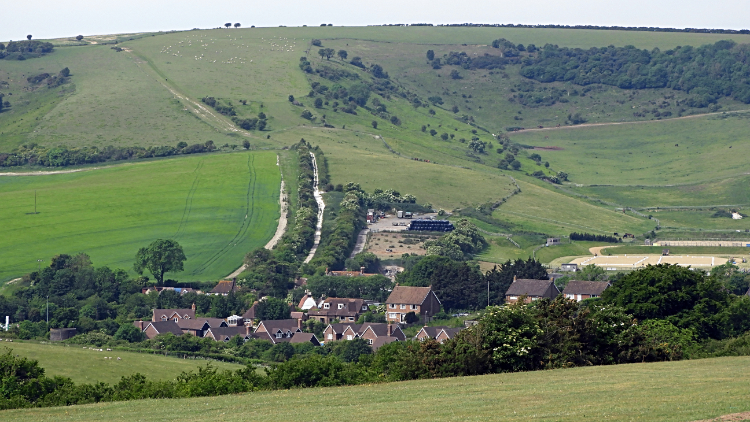 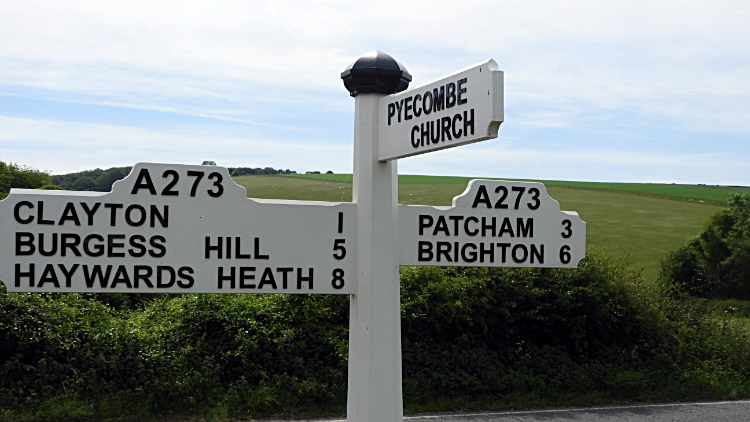 Crossing the A273 at Pyecombe

I arrived in the village of Pyecombe by crossing the A273 and after the road crossing I walked up a road to the Church of the Transfiguration which was on the top of a small hill in the village and beside the South Downs Way path. The church is a 12th and 13th century building and it is Grade 1 listed. It is a very pretty church as well. I took a quick peep but there were a few people milling about the place so I made a quick exit and from there I scoured the village looking for a shop or cafe. I fancied picking up a drink and chocolate bar to enjoy a little further on my way. But there was no shop to be found, just a major road garage on the junction of the A273 and A23. I detoured to the garage shop but on seeing the queue of car travelling people in the shop I made a quick exit. "Shucks, no extra drink or treat for today then". 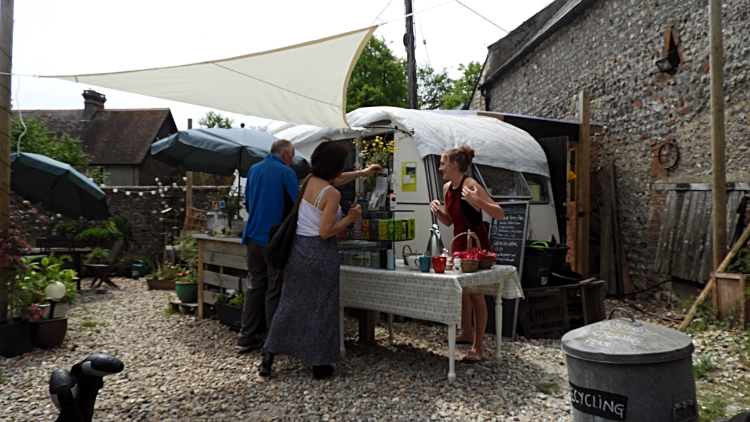 Lunch at the Wildflour Cafe, Saddlescombe 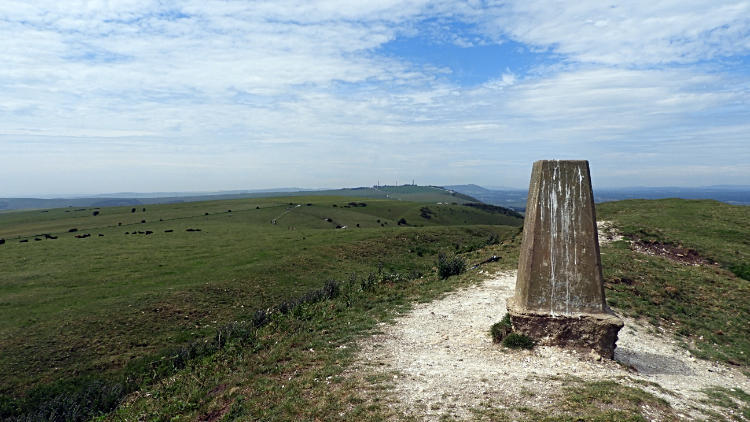 The next stage of my walk featured the second of two significant climbs of the day. The first had been the 170 meter climb from Ditchling at the very start and now I faced a 120 meter climb from the A23 road gap to West Hill. On the way up I passed a family group of half a dozen and then a little further up the hill the family group passed me. The reason for that was because I stopped to watch a line of Ants walking across the chalk lane leading up to West Hill. It was a mini insect motorway, two lines of Ants, one coming and one going. I watched the ones exiting the nest with nothing in tow and the ones returning to the nest with bits of grass or bits of leaf or nothing. They must have been sunbathers. From Ant Avenue I crossed over West Hill and descended to Saddlescombe where i was delighted to find the Wildflour Cafe. There were quiet a few customers at the outdoor cafe and I found just one empty table to join them. Treating myself to coffee, cold drink and delicious home made cake, I sat for twenty minutes enjoying both the fare and the atmosphere. It was just great. The tuck was just what I needed for the next mile of my walk, following summer Down on the south side of Devil's Dyke towards Fulking Hill. 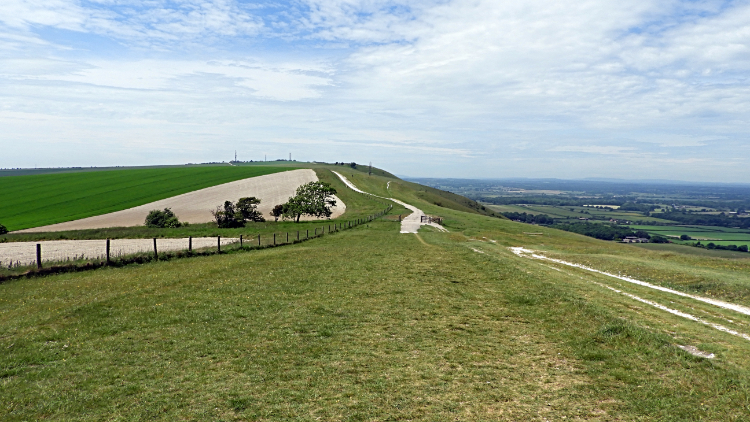 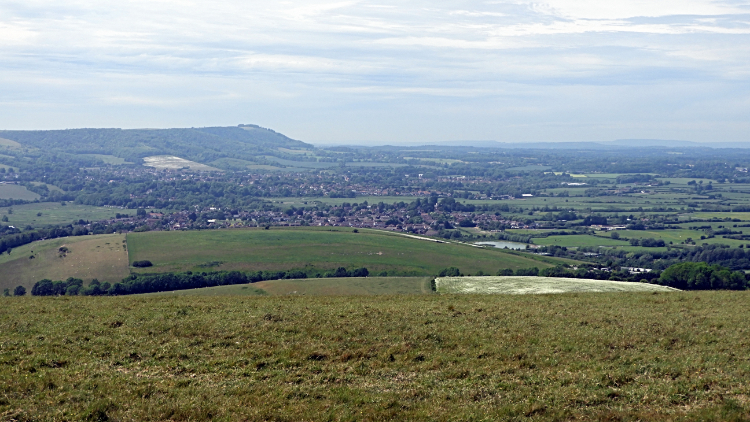 View to Steyning and Chanctonbury Hill

From Fulking Hill I kept to a high line of between 160 meters and 220 meters, undulating on the ripples of first Perching Hill and then Edburton Hill and next Truleigh Hill, the highest of the bump line at 216 meters and therefore the chosen site of a Radio Station and also of a Youth Hostel. By arriving at the Youth Hostel I also came to the end of a tarmac road leading up to Truleigh Hill from nearby Shoreham by Sea. The English Channel was only three and a half miles away. Yet I could not see it. Nor was I heading for the seaside, instead making my uncomfortable way along the tarmac road for a half mile and past the north edge of Beeding Hill before cutting away from the coastline and the line of the South Downs Way to head north-west on a bridleway down towards Upper Beeding. 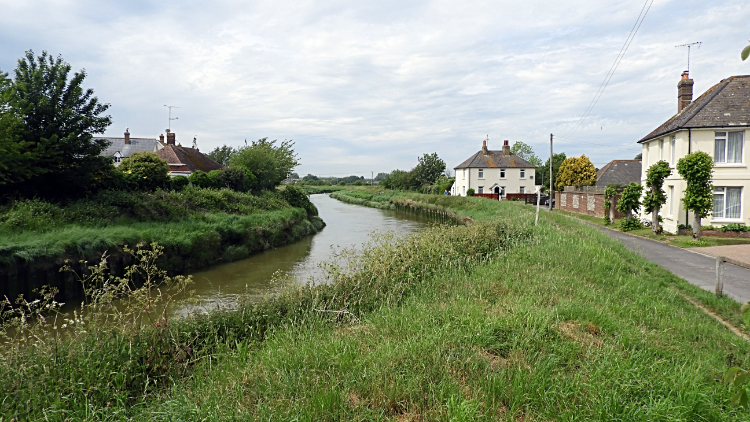 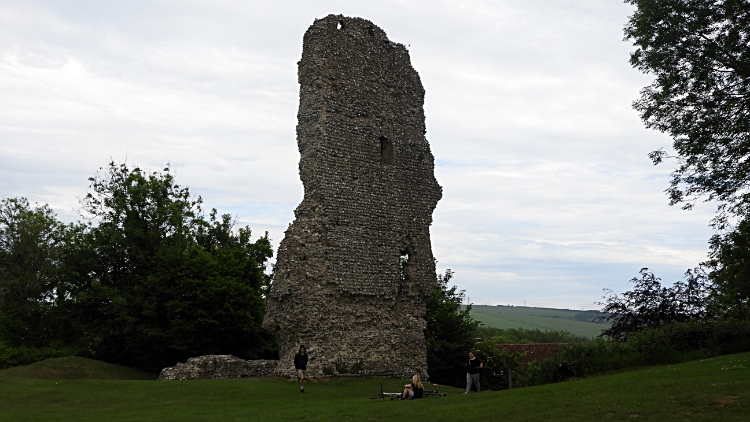 An information board at the top of the bridleway said "Welcome to Upper Beeding. A village founded by the Anglo-Saxons". It invited me to see the 16th century houses and cottages in Hyde Street, to visit the ancient Saltings Field, to ramble along Smuggler's Lane, to wander alongside the River Adur and to relax. After coming down the Monarch's Way and walking along some pretty streets in the village I crossed Beeding Bridge and entered the neighbouring village of Bramber. I had reached my home for the night and checked in at the Castle Hotel, ditching my rucksack in my room straight away. Then back out i went for an exploration of Bramber Castle. While looking around the ruins of the castle on the 950 year old site of fortified encampment I could see why the site was chosen. It sits on a small but steep hill overlooking the wide valley of the River Adur and would have made a formidable defence. The views across the river valley to Upper Beeding and Truleigh Hill and to the Low Weald were impressive. As were those to the South Downs. "Back up there tomorrow. That's me".

From my evening Facebook Post "Another great day on the South Downs Way over. A reasonable 12 miles from Ditchling to Bramber. The wind had kicked up a bit, breezy rather than windy on the tops. Lots of people out enjoying the scenery including many picnicking families. Highlights included the Deer encounter and a fab lunch at Saddlescombe. It is at the bottom of the hill in this picture of Summer Down which I took from West Hill. Tomorrow I visit Chanctonbury Ring Hill Fort and later I take an off route diversion to Arundel. Fifteen miles await."