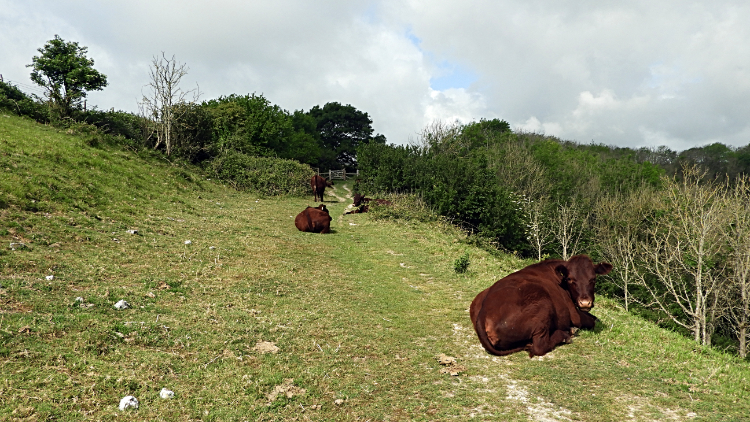 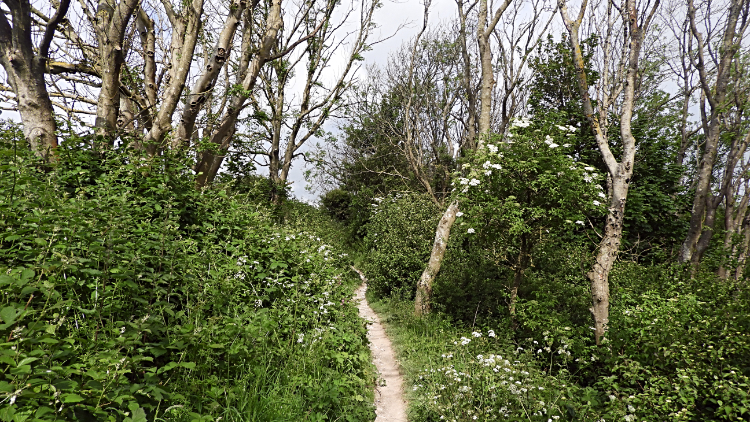 Seven thirty in the morning and I am on my way again on day four of my South Downs Way ramble. First up is a walk from Bramber to Steyning and the climbing starts almost immediately after crossing the A283 and following Clays Hill to Bostal Road. I had started from sea level in Bramber after all so up was the only way. Bostal Road is a steep climb, all the way to the junction with Newham Lane which marks the point where I leave tarmac behind to follow a path through Pepperscombe Down Nature Reserve and back to the South Downs Way path. In the nature reserve I encounter a herd of cows whose job is probably to keep the grass and thickets of the reserve under control. They had not started work though; too early I expect. Instead they were sprawled on the footpath and my best course of action was to simply walk around them. It was no bother at all. After my latest bovine episode I followed the nature reserve path following a woodland trail festooned with flowers, mostly spring pinks, for just short of a mile before leaving it to access the open uplands. 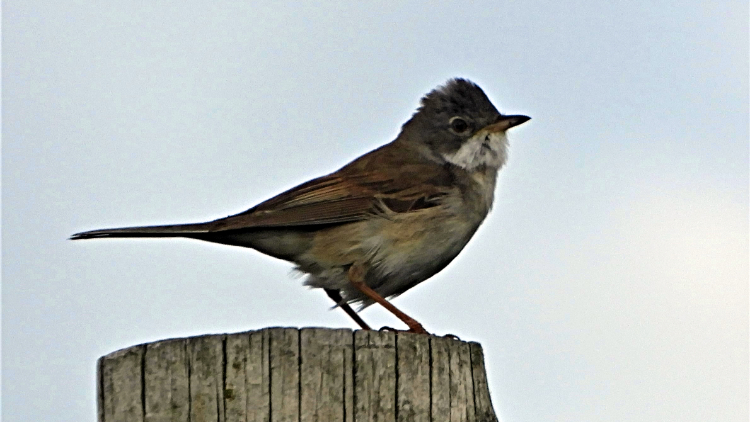 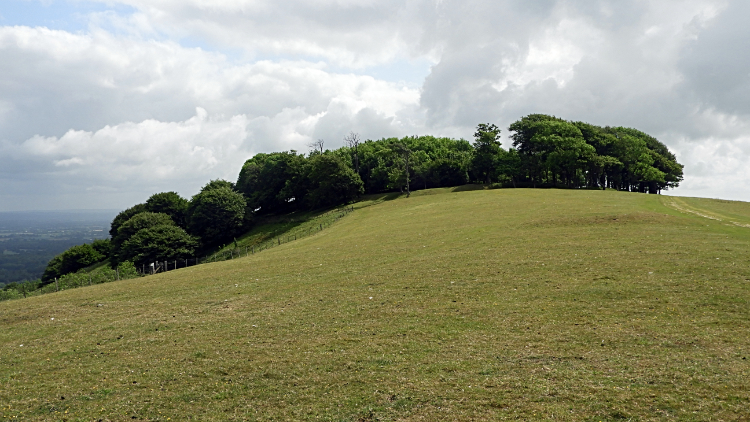 As soon as I had set of walking on the South Downs Way path with wide open upland pasture all around a Skylark landed on a post near to me. So long as I did not get too close the bird was not bothered about me and for keeping my distance the Skylark rewarded me with a song. Oh, how I love the sound of Skylarks on a bright morning in the spring and early summer. They always make me smile. Just as this little character did. After enjoying the birds serenade I continued on along the path across open ground to arrive at Chanctonbury Ring. I had the site of the prehistoric hill fort of Chanctonbury to myself and I wandered in and around the ring which is now covered in trees. I found some of the Beech tree stumps which were felled in the Great Storm of 1987. I remember that well, booked on a flight from Gatwick to Thailand the next day and fearing it would be cancelled. Fortunately it wasn't. Still I remember it howling while I stayed with cousins in nearby Reigate so I can imagine it tore the soul out of the trees standing high and exposed up here. Thankfully it was much quieter now. 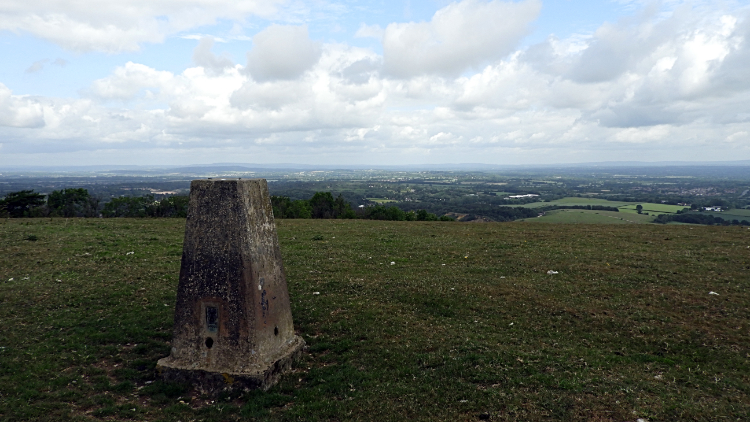 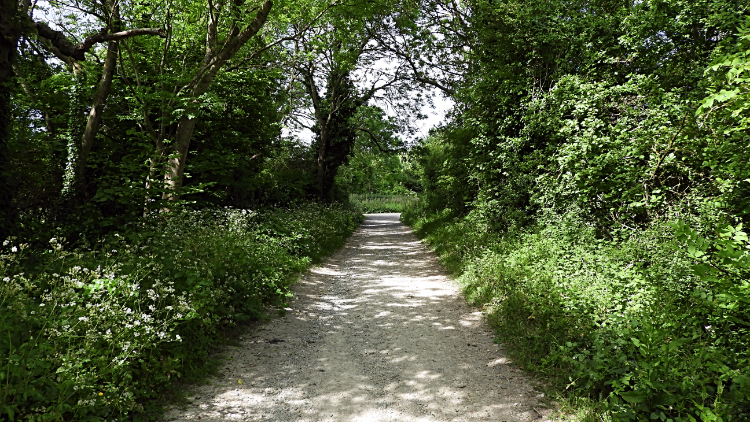 Not entirely quiet though. After three days of exceptionally calm and entirely sunny weather which I had enjoyed since Beachy Head the sky was now filling with some angry looking clouds. And as I stood at the trig pillar on Chanctonbury Hill I could see a big black cloud filling the sky to the south-west and coming directly towards me on the hill. And then I had it, in no time at all, a rainstorm pouring down on me. There was no cover up here so I just had to grin and bear it. "Do I bother to put on my rain gear?" I thought. I need not have worried. The rainstorm went as quickly as it has come. It was quite sharp, heavy at its peak and blowing too. But the rainstorm lasted no more than a couple of minutes. By the time I walked down the slippery chalk path from Chanctonbury Hill to the crossing of the A24 just south of the village of Washington the sun was shining again. Oh, I nearly forget. On the way down from Chanctonbury Hill and just after the rain I visited Chanctonbury Dew Pond. A notice board at the dried out pond read "Site of Special Scientific Interest: This dewpond, constructed around 1870, was restored by the South Downs Society in 1970 and is maintained by them". 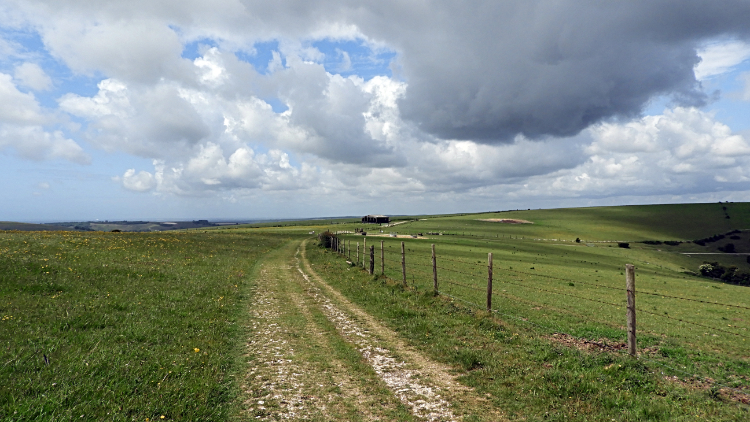 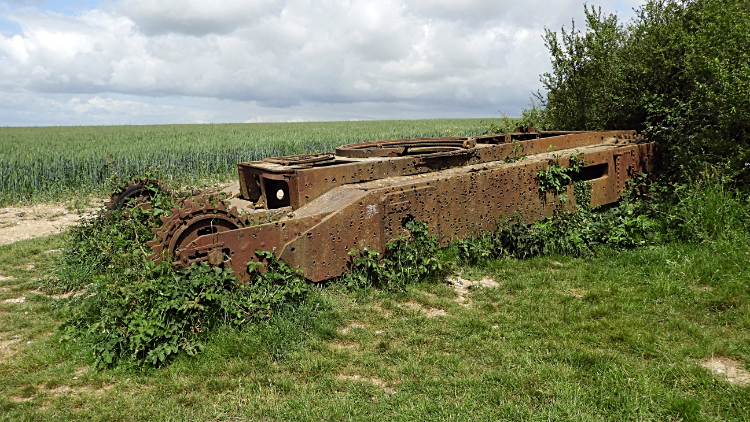 From the A24 I made my second and final climb of the day to Highden Hill and on to Barnsfarm Hill, a steady climb of just over 100 meters in a linear mile. On Highden Hill I came to a South Downs sign which read "Winchester 52 miles, Eastbourne 47 miles". I was just about half way but not quite, especially as I had a big diversion planned and the detour was soon coming up. I crossed Barnsfarm Hill, where appropriately a big barn sat atop, and then I followed the National Trail path over Sullington Hill, past Chantry Post and to Kithurst Hill where I left the South Downs Way by turning left and heading in a south-west direction towards the village of Burpham. First I followed a path walked around a large field of Wheat and then I came to a small copse. Emerging on the other side of the copse I was amazed to find the remains of a World War II Churchill Tank. The shell was rusted and full of artillery holes which I found out were the result of the tank being used as target practice by Canadian troops stationed near here in preparation for the Dieppe raid of 1942. The tank had simply broken down and could not be started so rather than expend time and energy recovering it the tank was left in situ. Since then it had been buried and dug up again. (Note: I was lucky to see it. Three months after my visit the tank was removed and bound for a military museum in northern France). 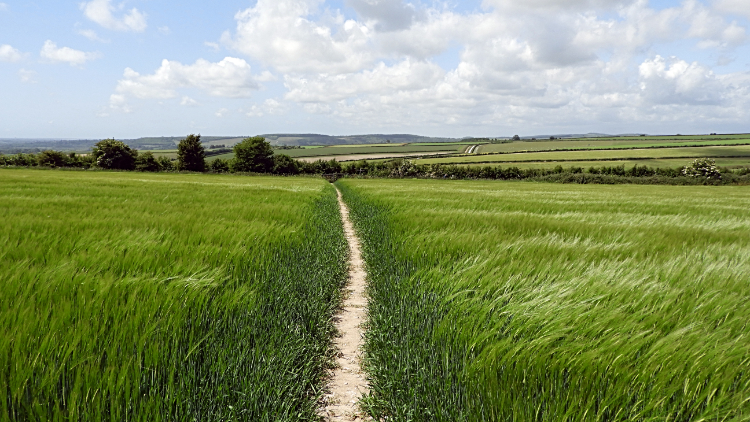 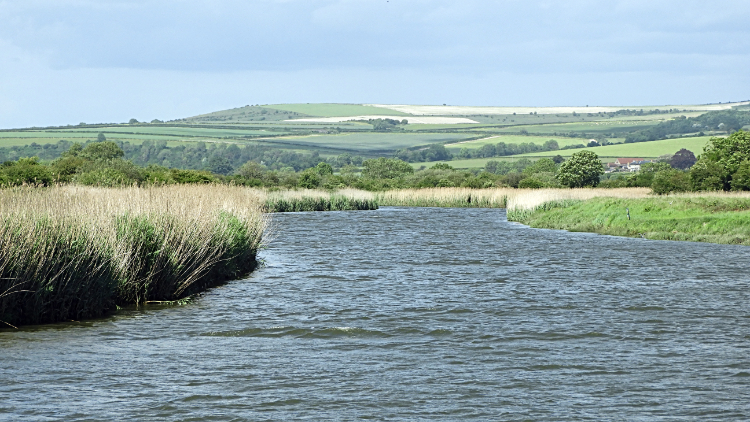 I had lunch sitting on the Churchill tank. After that brief rainstorm of earlier the day was now settled and warming up nicely. Sitting on the killing machine and looking out across the beautiful countryside of the lower downs while enjoying refreshments in complete silence was so relaxing. I contemplated the walk ahead, to Burpham and from there onwards to the historic town of Arundel. I was temporarily off the South Downs Way and by heading for Arundel I was adding five and a bit miles more to my journey. But I was doing this in respect and in memory of my beloved late father. He was a Sussex lad, brought up in nearby Littlehampton and he told me of childhood adventures in and around the River Arun and Arundel. When he was seven years old he had a live ticket, if you could call it that, to the Battle of Britain which raged over these skies. I tried to imagine that, all the noise, carnage and bloodshed as, after crossing some big arable fields, I walked the peaceful and very beautiful wildflower fields and flower flanked lanes of Wepham Down and the very beautiful village of Burpham. The only flying I saw was of one light aircraft, of birds and of a number of pretty Butterflies including Adonis Blue and Brimstone. In Burpham I stopped at the George for a pint of Orange and Lemonade and a bag of Salted Nuts. I know I had refreshments just a while earlier while sat on the Churchill tank but it was about 1.00pm, midday hot and I had not so far to go. I fancied the break at the pub and I took it. I thoroughly enjoyed it too. After the drink and the nuts I arrived beside the River Arun for the first time, no more than ten feet wide here and surrounded by high reed banks. I left its side to cross fields to the village of Warningcamp where I crossed the Arun Valley railway to rejoin the riverside path. 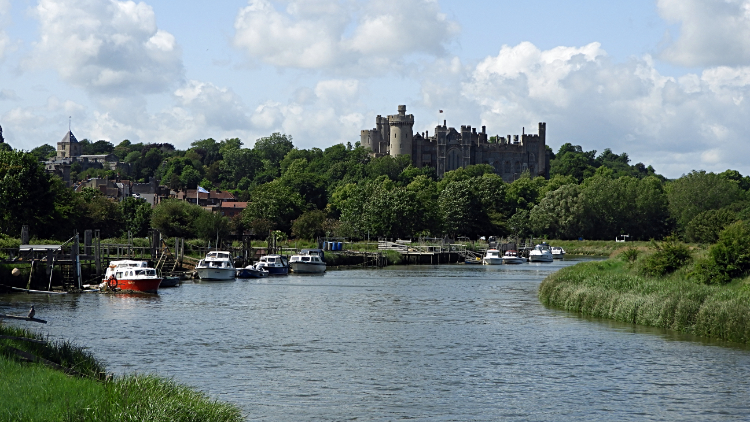 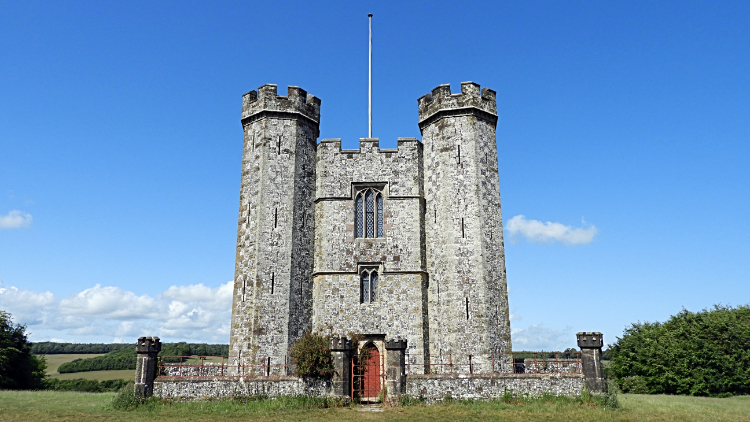 At Warning camp I had joined the Monarch's Way footpath which was now to lead me all the way along the riverside to the finish of my walk in Arundel. And now the river was much wider, at least fifty feet across. Looking at my map I discovered the river had been split at Burpham. I had only seen half of it, the other spur a half mile away at Offham. It had come back together before Warningcamp. Now my attention shifted between two sights. The first and foremost was to the river right next to me. The second was across the river to the dreamy turrets of Arundel Castle. I continued on, sweeping around with the river towards the town of Arundel. As I drew closer my solitude was broken, first by small boats punting up and down the river and then by other walkers enjoying their strolls along the riverbank. Soon enough I was in the town and milling around with other folk. I checked into my hotel and dropped off my bags before returning to the streets and exploring the town of Arundel in more depth. Just as my dad had done around seventy to seventy five years earlier. When he was a lad. "Cheers Dad, I am thinking of you", was amongst my thoughts as I wandered the town and as I explored Arundel Park. The sun shone.

From my evening Facebook Post: "I am halfway through my South Downs Way walk now and settled in Arundel for the night. From my start in Bramber I climbed via Steyning and Pepperscombe to join the National Trail. Next came Chanctonbury Ring Hill Fort, a treat that was. After reaching the trig pillar on Chanctonbury Hill I passed a Dew Pond and then descended to cross the A24. While doing so I endured my first rain shower of the walk. All 30 seconds of it! From the A24 I continued on the South Downs Way by climbing Highden Hill and continuing to Kithurst Hill before leaving the trail on my chosen course to Arundel. I journeyed through gorgeous Downs country, passing the abandoned World War Two tank which had been unearthed from a pit a few years earlier and by walking amidst beautiful flower meadows. I reached the pretty village of Burpham from where I followed the River Arun to Arundel. After depositing my backpack at the Norfolk Arms where I am now staying I took another walk exploring the town and Arundel Park which included a walk beside Swanbourne Lake. The sun shone all afternoon, no more rain, just perfect weather. It is set to change, so the forecasters say but I cannot complain. I have enjoyed four great days on the walk so far and now I have four to go."