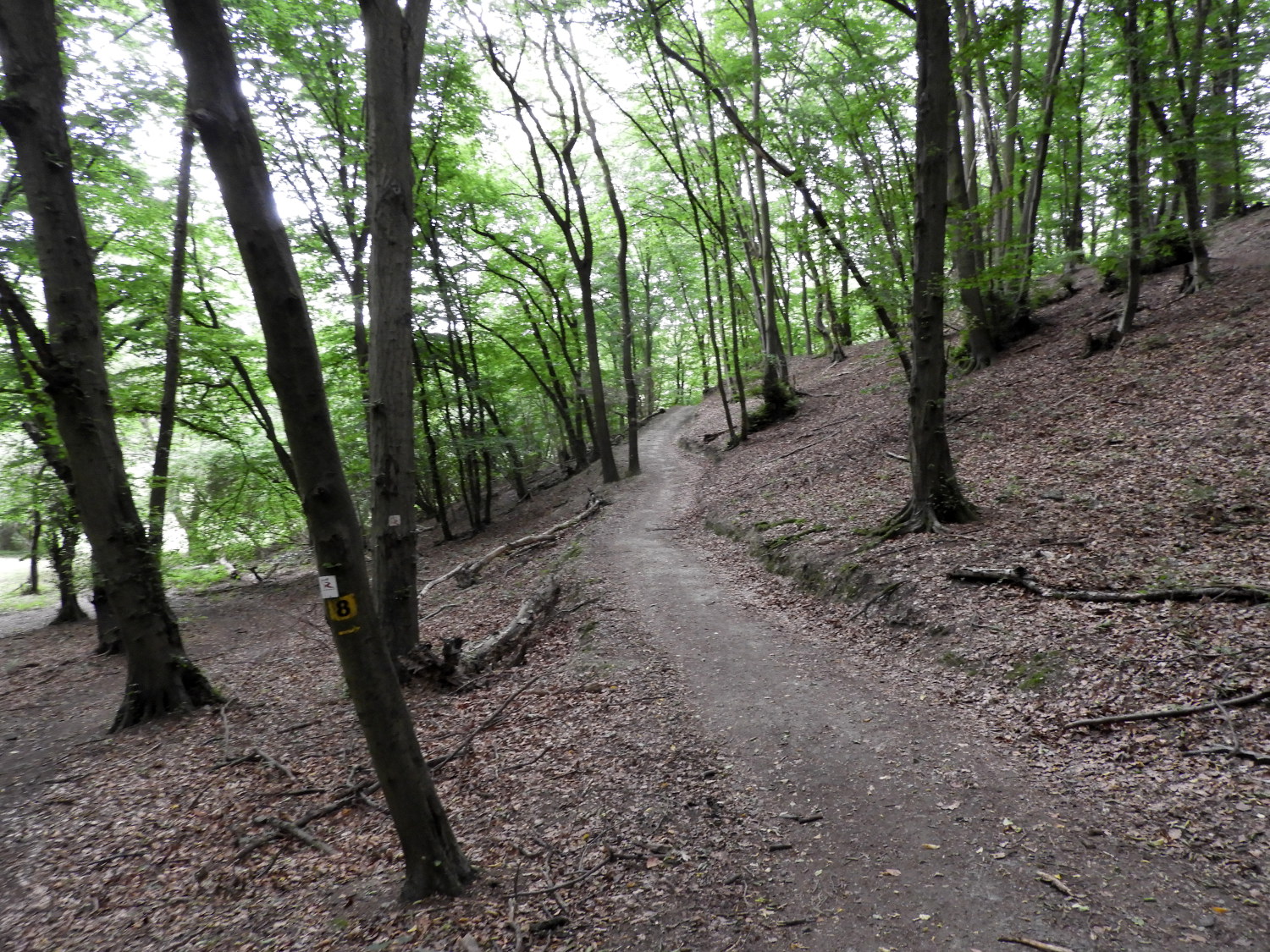 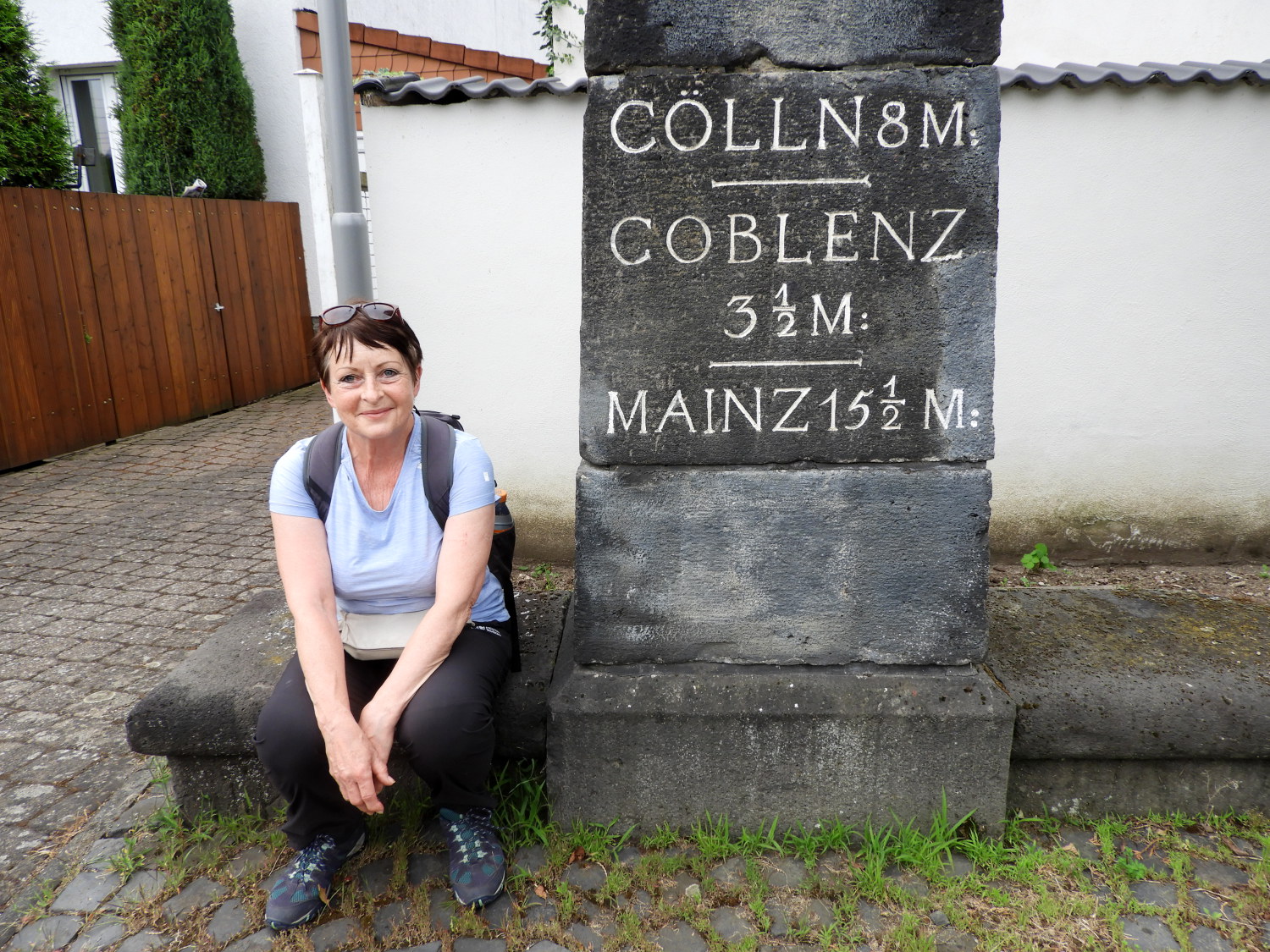 Last night was not good. While we had enjoyed a good evening in Bad Breisig which included a lovely riverside dinner we suffered an awful night in our hotel. The place was fine, the room clean and tidy but the location proved to be disastrous, situated near to the main rhine valley road and on a night when it seemed every emergency services vehicle was called into action. Sirens blazed from swift moving vehicles all night and though we did not know why, it keep us from a good night's sleep. Oh well, it couldn't be helped and with all the disturbance it resulted us being up early and rather than fidget in bed for two hours before the first sittings for breakfast we decided to miss it, setting off early at precisely six o'clock in the morning. After walking through a quiet waking Bad Breisig we followed the Rheinburgenweg along a path through woodland just above the valley floor, heading towards Burgh Rheineck, the path ceding to an access road which we hastily ducked off when an early morning domestic refuse wagon passed us, spraying dust all over the place. Half way to Brohl-Lützing we dropped off the Rhine Castles Trail path, following the quiet Alte B9 road into Brohl-Lützing in the hope of finding a shop or cafe open so we could have breakfast. Though it was seven in the morning now, no such luck. There were workmen starting roadworks and delivery vehicles delivering. But no place open for food. For now we would have to rely on emergency provisions. 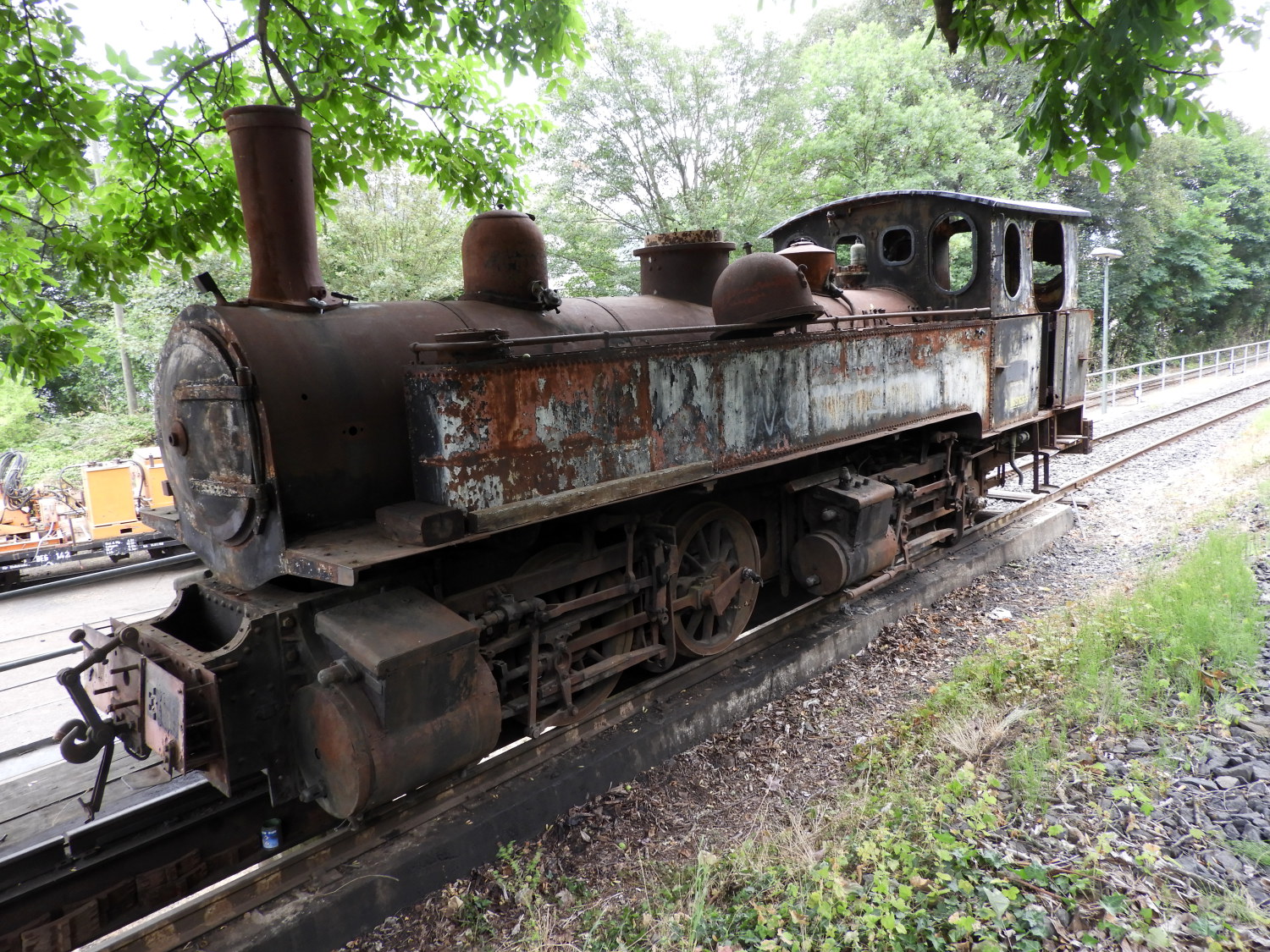 Train for renovation in Brohl-Lutzing 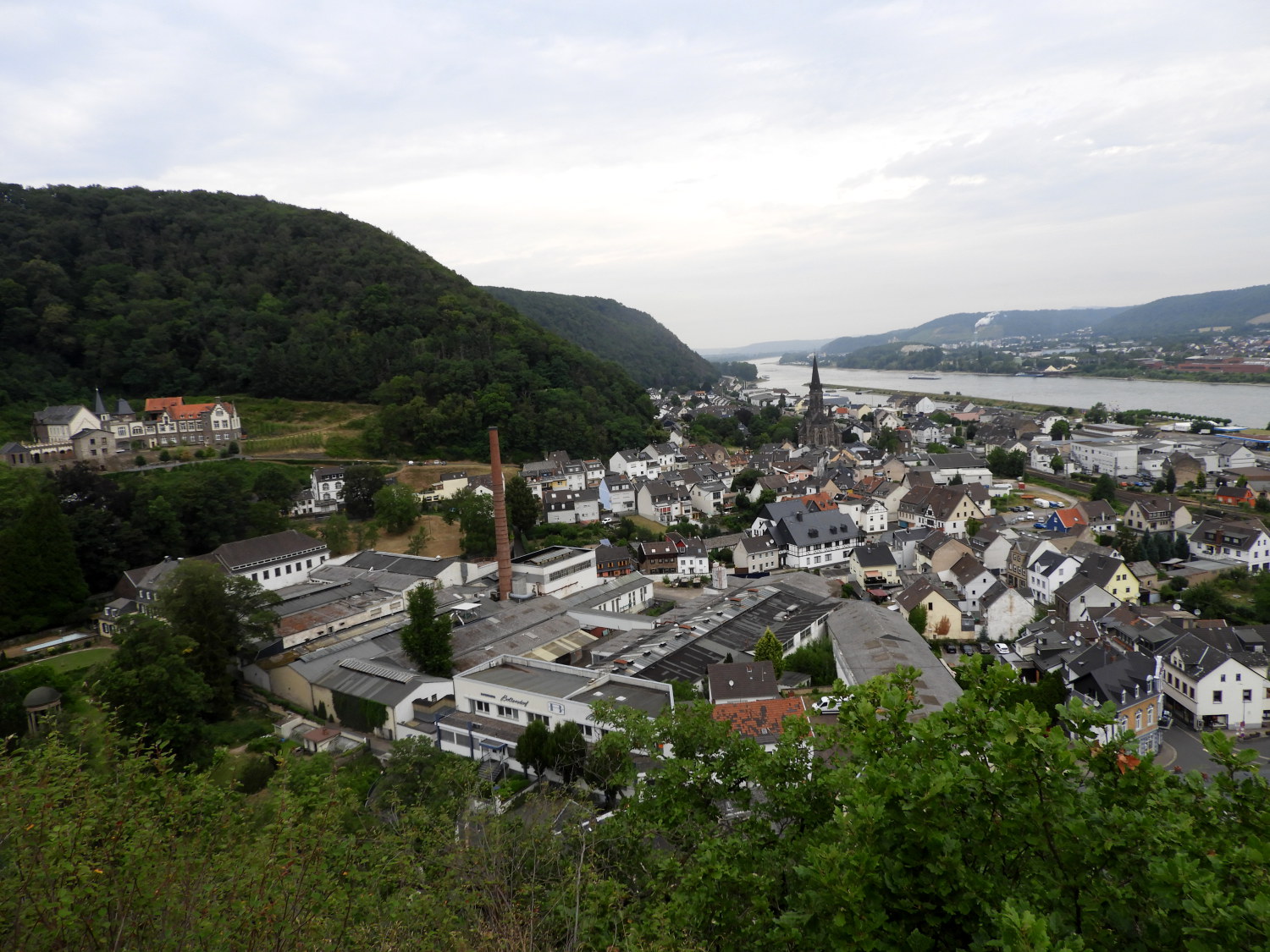 As it had been on our first two days on the Rheinburgenweg the day started cloudy. Which was good. Though a little clammy and warm it was better than having the sun blazing from the start, especially as temperatures were now forecast to rise into the mid to high thirties each day and perhaps into the low forties too. Even home in Northern England had that forecast too, it was the hottest of European summers right now. Still, before today's blazing sunshine we could at least make the first climb from Brohl-Lützing to Dickberg. It would be a steep one but it had to wait for five minutes as I spotted an old railway siding with rusting trains and rolling stock which I had to take a closer look at. It was part of the Vulcan Express, a heritage line which takes people on nostalgic journies on old steam trains along scenic old railway lines. So this train in picture will hopefully have a new life entertaining people. Super. Just beyond the sidings we climbed in a steep helter skelter way to a shelter looking down on Brohl-Lutzing and the Rhine where we stopped for breakfast, using up some of our emergency provisions. 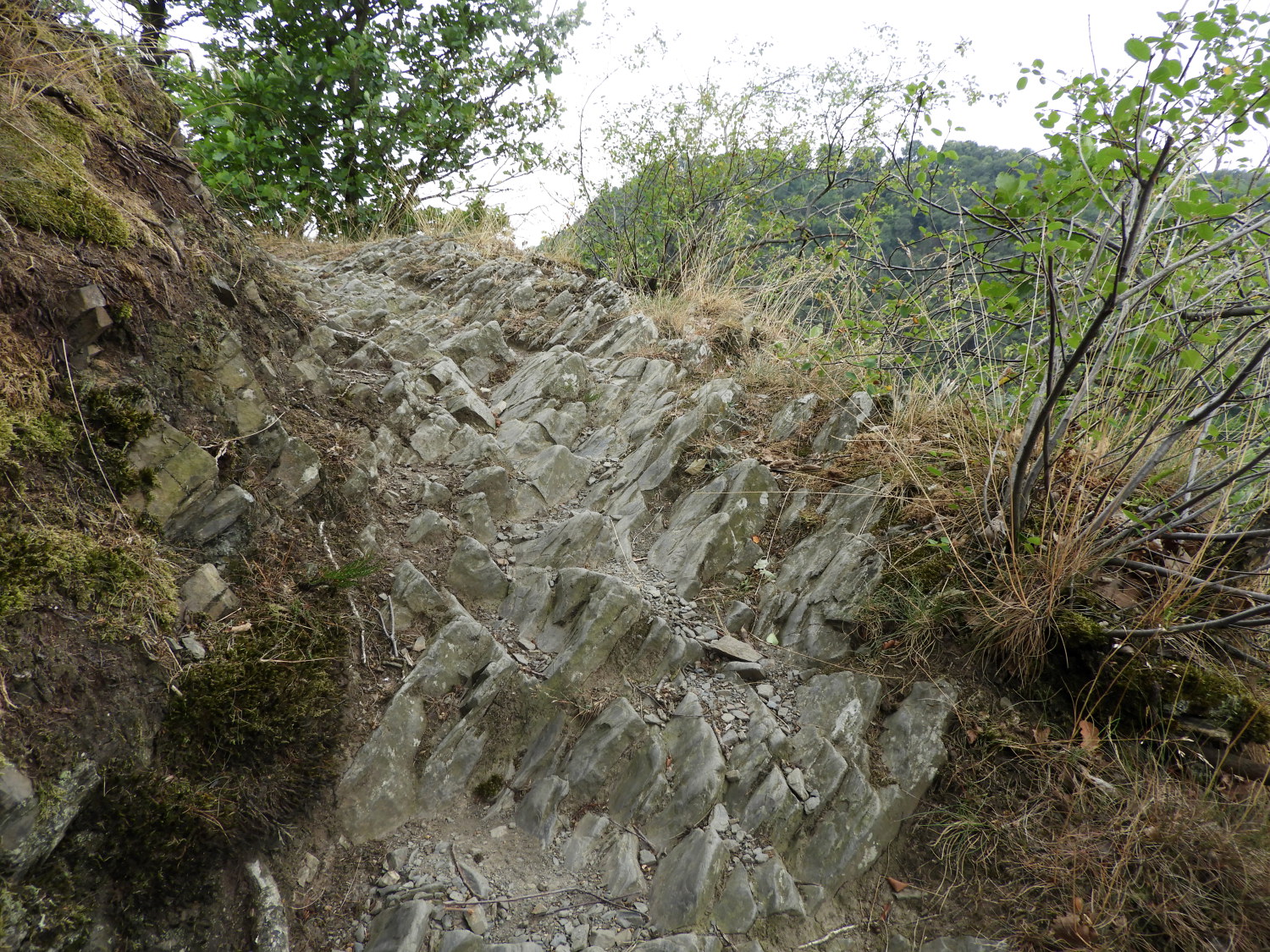 Rocky path on the steep climb to Dickberg

Sufficiently fuelled to complete the climb to Dickberg, I led the way on the steep and sometimes exposed ascent of the north-west promontory of the hill. In parts of the climb the path was carved directly into the bedrock making natural stairways up the way. In parts the steeper scrambles up were afforded chain railings, near via ferrata, to help the haul up the steep slope. We made one hundred metres of ascent in a short space of time to climb the Dickberg, in the last part being shown the way by some entertaining long-tailed tits which fluttered in and out of the path side trees ahead of me, as if to say "This way, not far to go". Alas, despite my encouragement to see the birds, Lil missed out on their show, puffing and chugging her way up a little way behind me. Like one of the old steam trains below. Eventually, when at the top of Dickberg I said "Well done sweetheart". It had been a severely steep climb up. 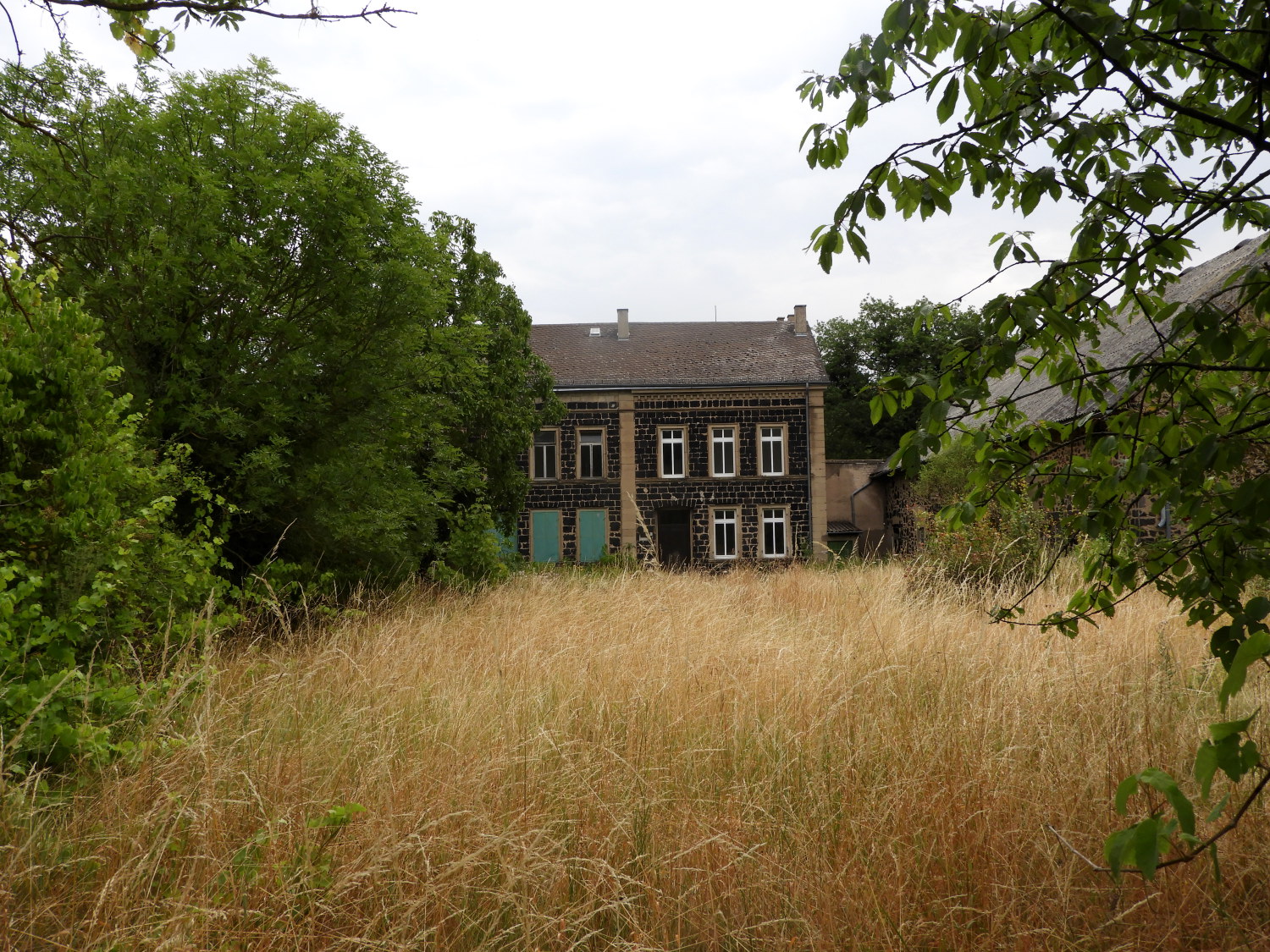 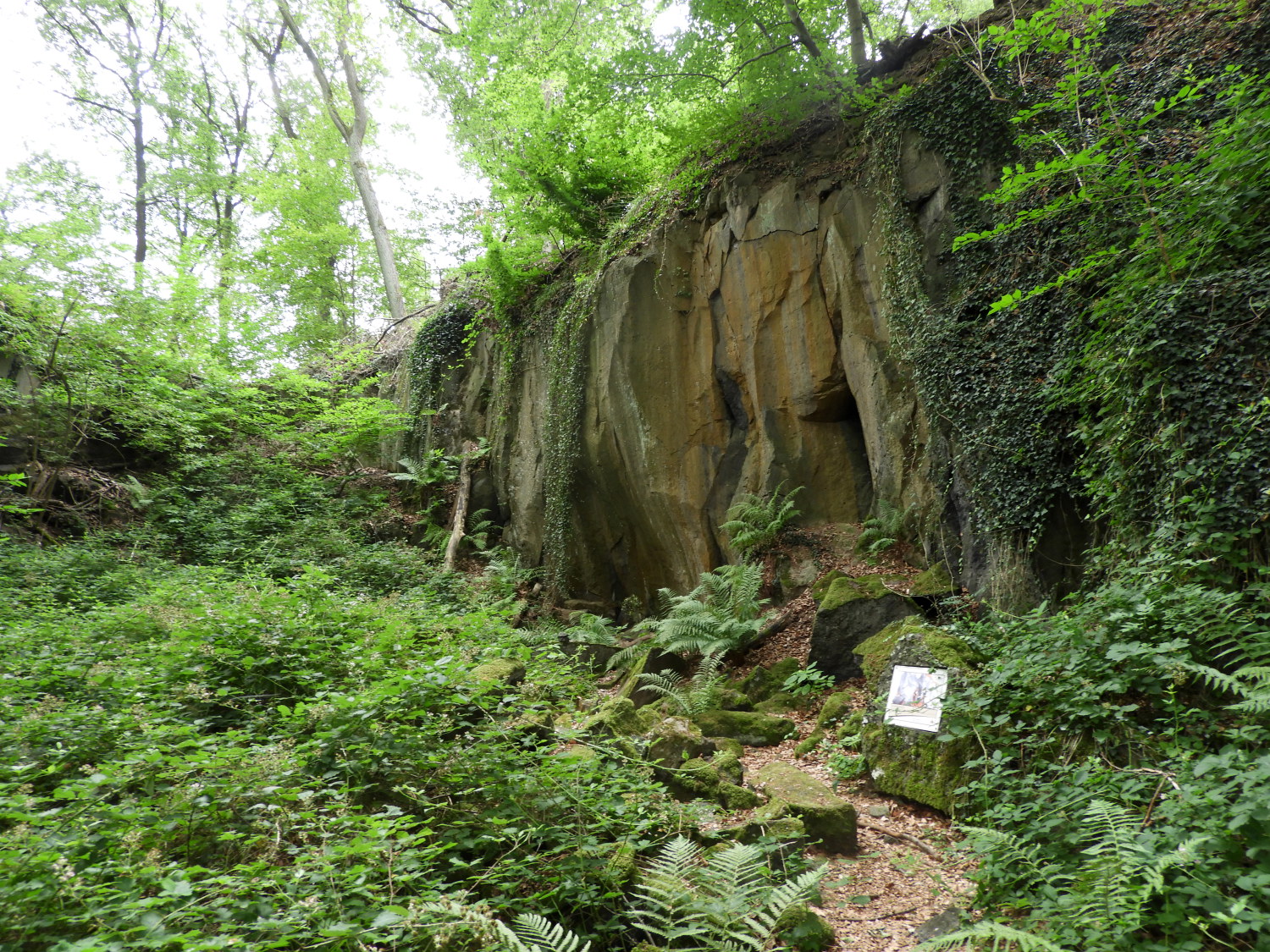 After the effort of the climb we relaxed into the walk, enjoying a lovely kilometer long level stretch of early morning ambling to the abandoned farmstead of Alkerhof. It was a shame to see the place so desolate, especially as it must have been a recent abandonment. My research into the walk showed me a recent picture of the farm when still inhabited and loved. It had not taken long for the garden lawn to disappear. Though the insects will no doubt love the change. Moving on, we walked from Alkerhof to the hill of Hohe Buche where we came to one of the trails of the Vulkan Park. The Hohe Buche Volcano Trail led us past many information boards explaining both the geological evolution of the area but also the industrial use of the land from ancient times, through Roman to modern. It was a fascinating and illuminating journey through the history of the place. 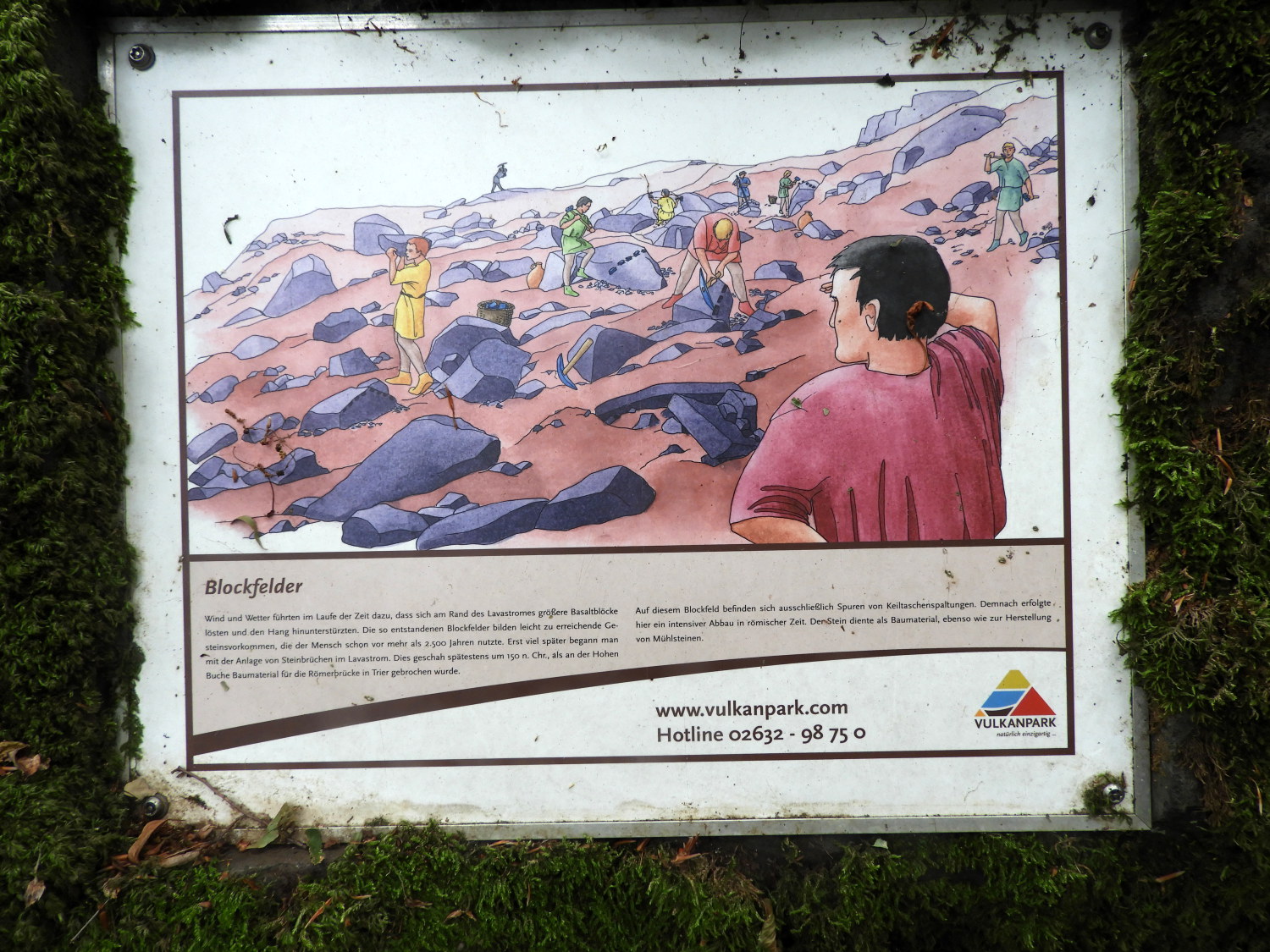 Information board on the Hohe Buche Volcano Trail 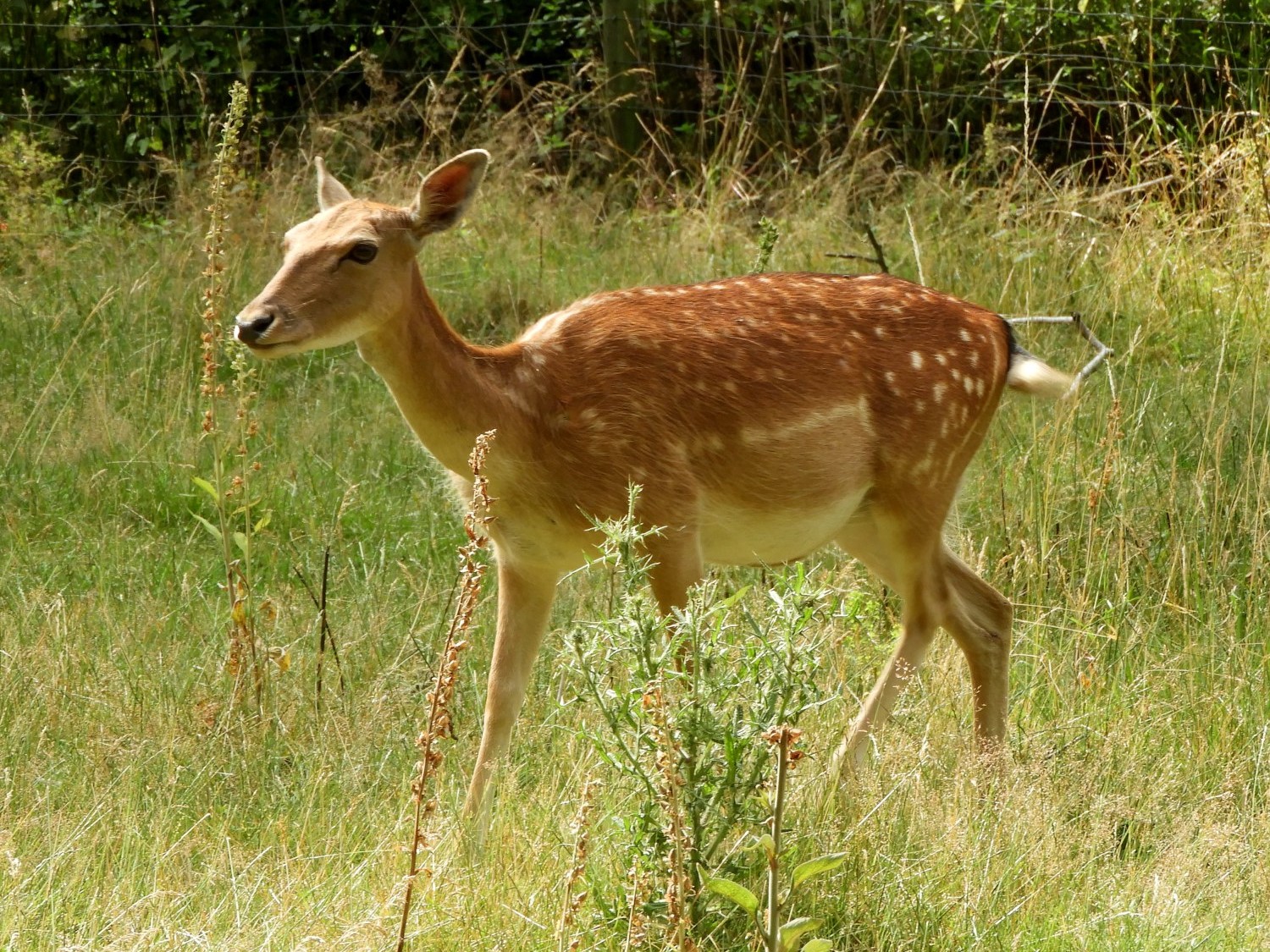 The information boards not only showed us how human ingenuity exploited the natural resources but how the volcanic activity shaped the land in the first place too. Lil and I left the trail much more informed than when we had arrived. Yet another fascinating development to out first European long distance walking adventure had taken place. And still I didn't feel we had ventured too far into the walk at all yet. So much fun had been had by Lil and me already and we looked forward to so much more. And that did not take too long to find when we passed friendly fallow deer walking in a paddock at Knopshof, a place where we left the woodland and rugged undomesticated lands of adventure since climbing from Brohl-Lutzing to cross a stretch of tended farmland. Coming from cover to open we instantly felt the rising heat. As we walked devoid of any canopy of cover the skies turned from gray to blue. 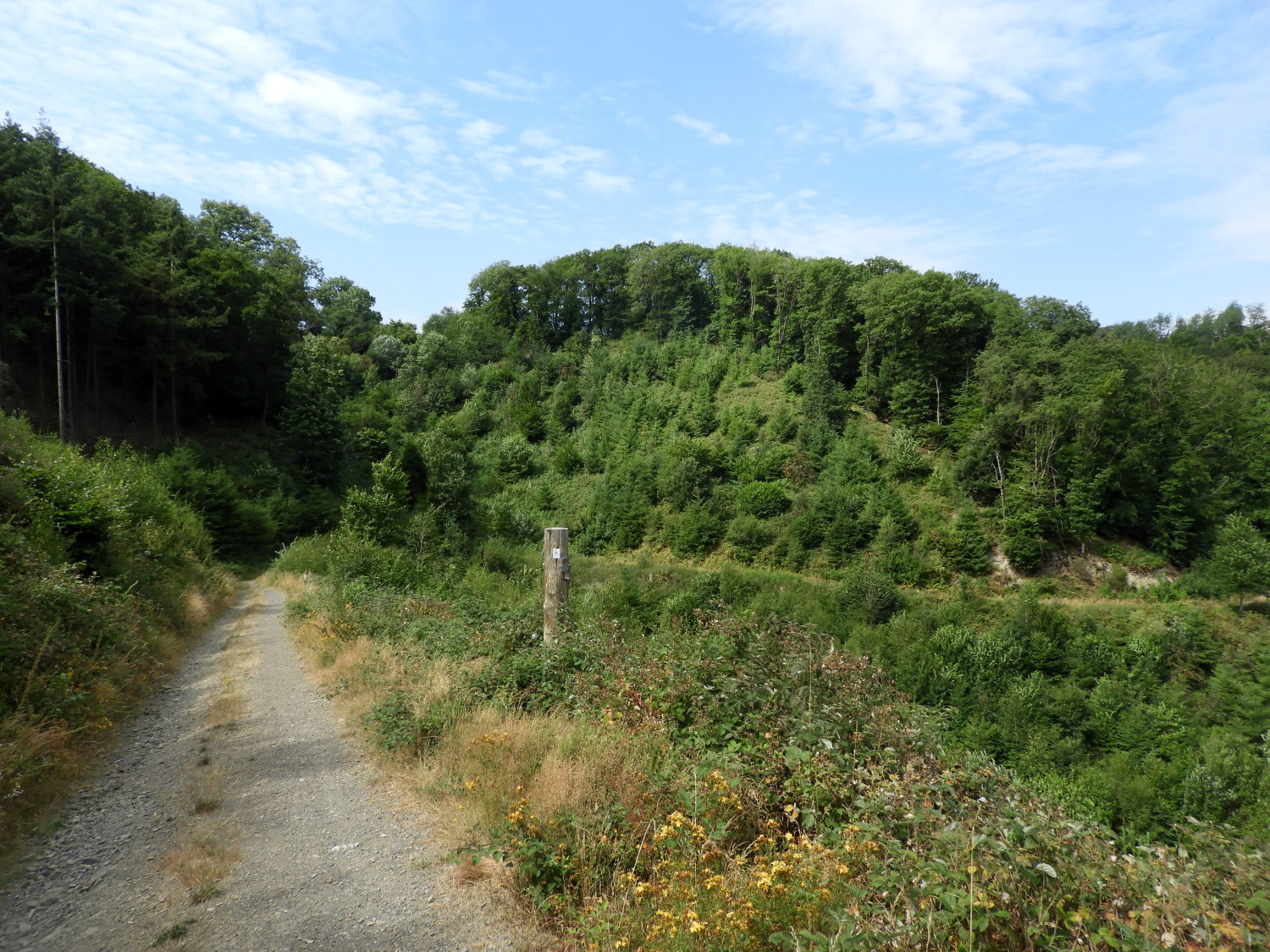 The trail from Huttenhof to Namedy 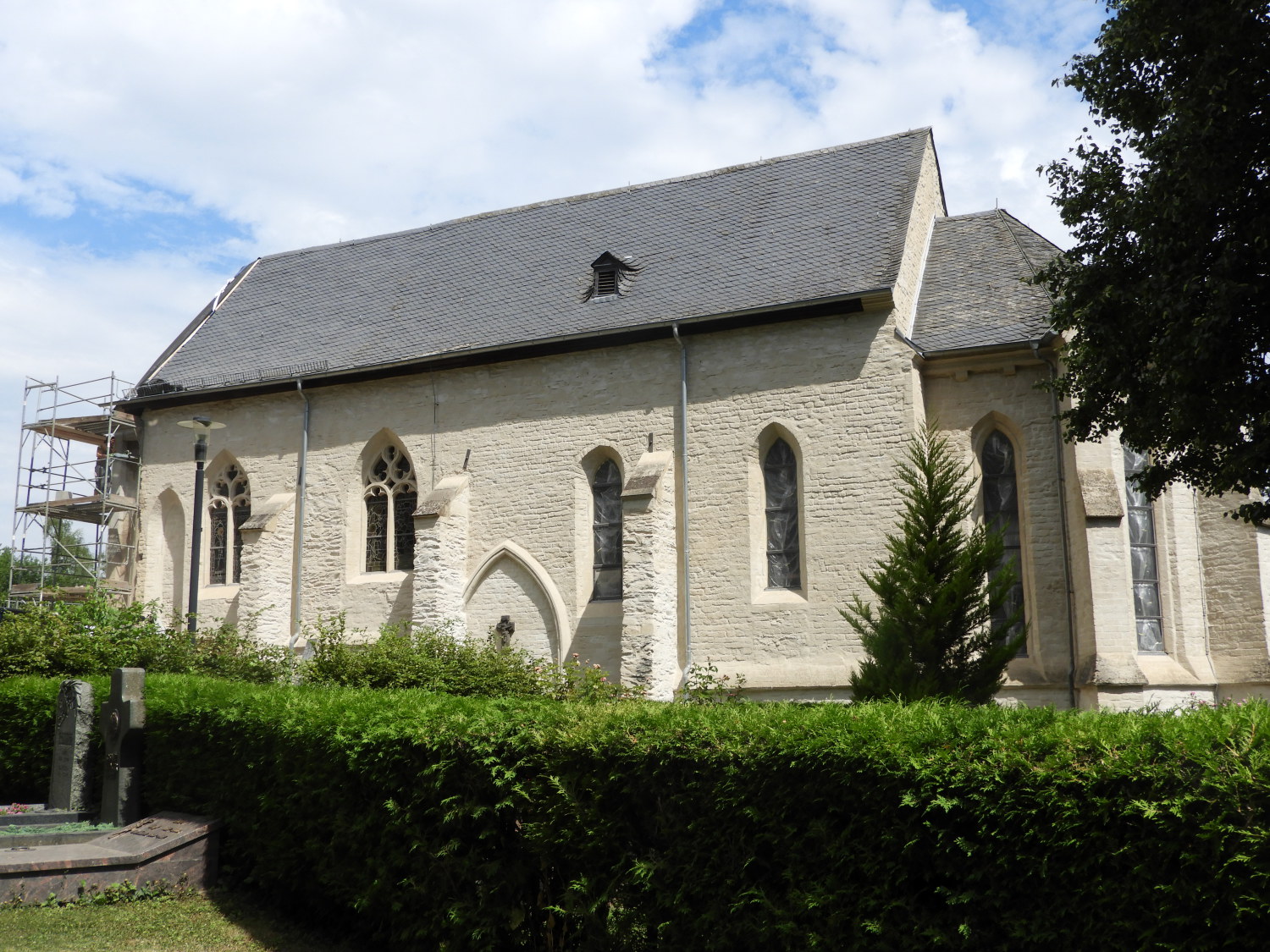 The open and arable farmland walk took us from Knopshof to the small settlement of Geishugelhof and on the farmstead of Huttenhof where the occupants had placed a single wire fencing directly where the Rheinburgenweg path led to the Neuentalsbach Forest which would lead us down the forest track to Namedy. We had no choice to crawl under it, making sure not to touch the wire which may have been electric fencing. A bit naughty that, right on the official path. Anyway, beyond the unofficial barrier we enjoyed the stroll down to Namedy, beginning it with a quick sit down on a fallen tree trunk to enjoy the sharing of a snack bar and a drink. After all it was getting towards eleven in the morning now. We had been walking for around five hours and feeling a little bit tired due to the lack of sleep last night. Indeed we were getting tired walking into the north-west environs of Namedy and very happy to arrive there, electing for a half hour break on a bench looking over St. Bartholomäus church which was being renovated. And while doing so I cheered a flagging Lil up for the next part of a walk today with yet another climb into forest pending. 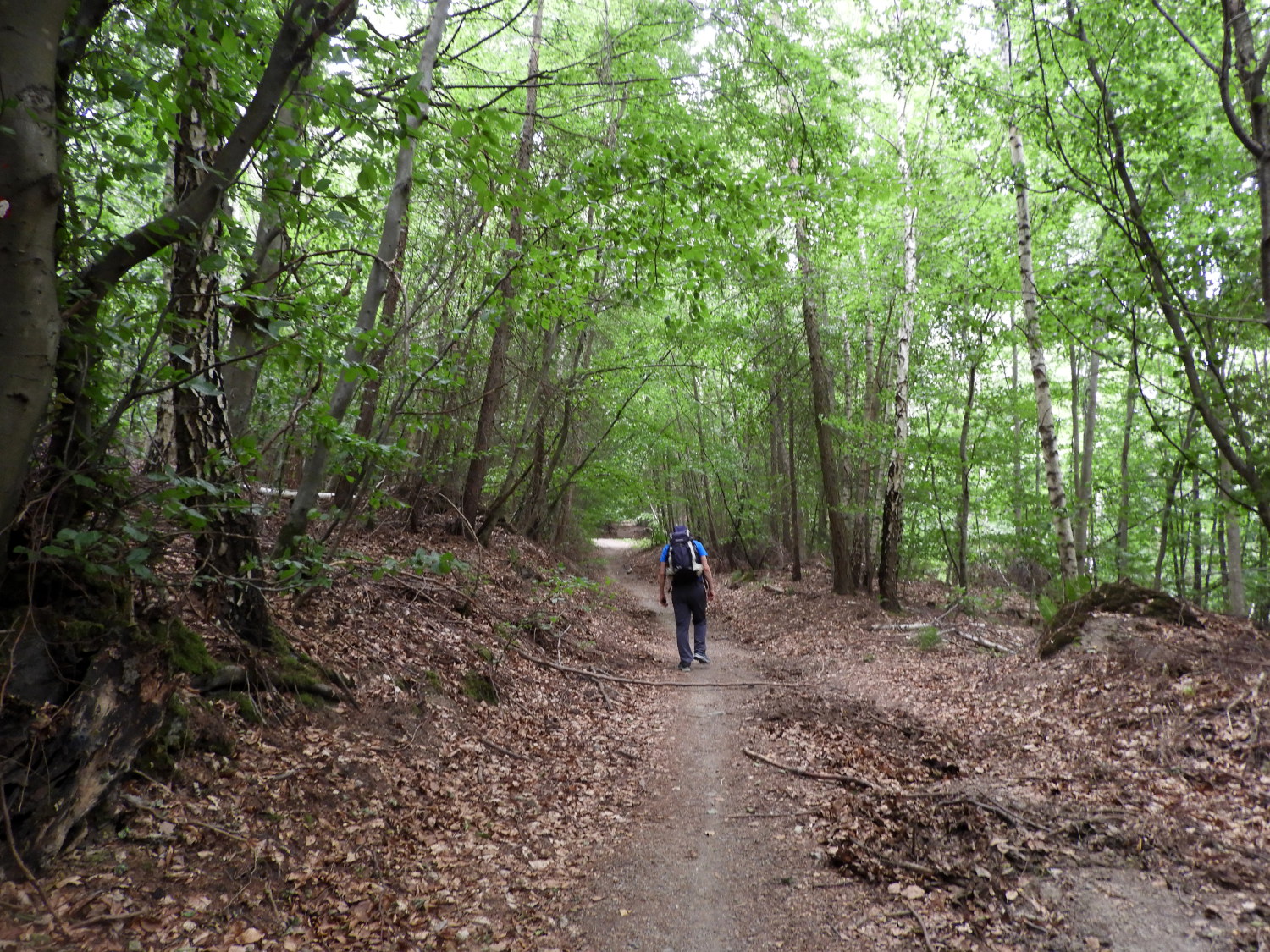 Climbing again, this time to Friedrichsborn 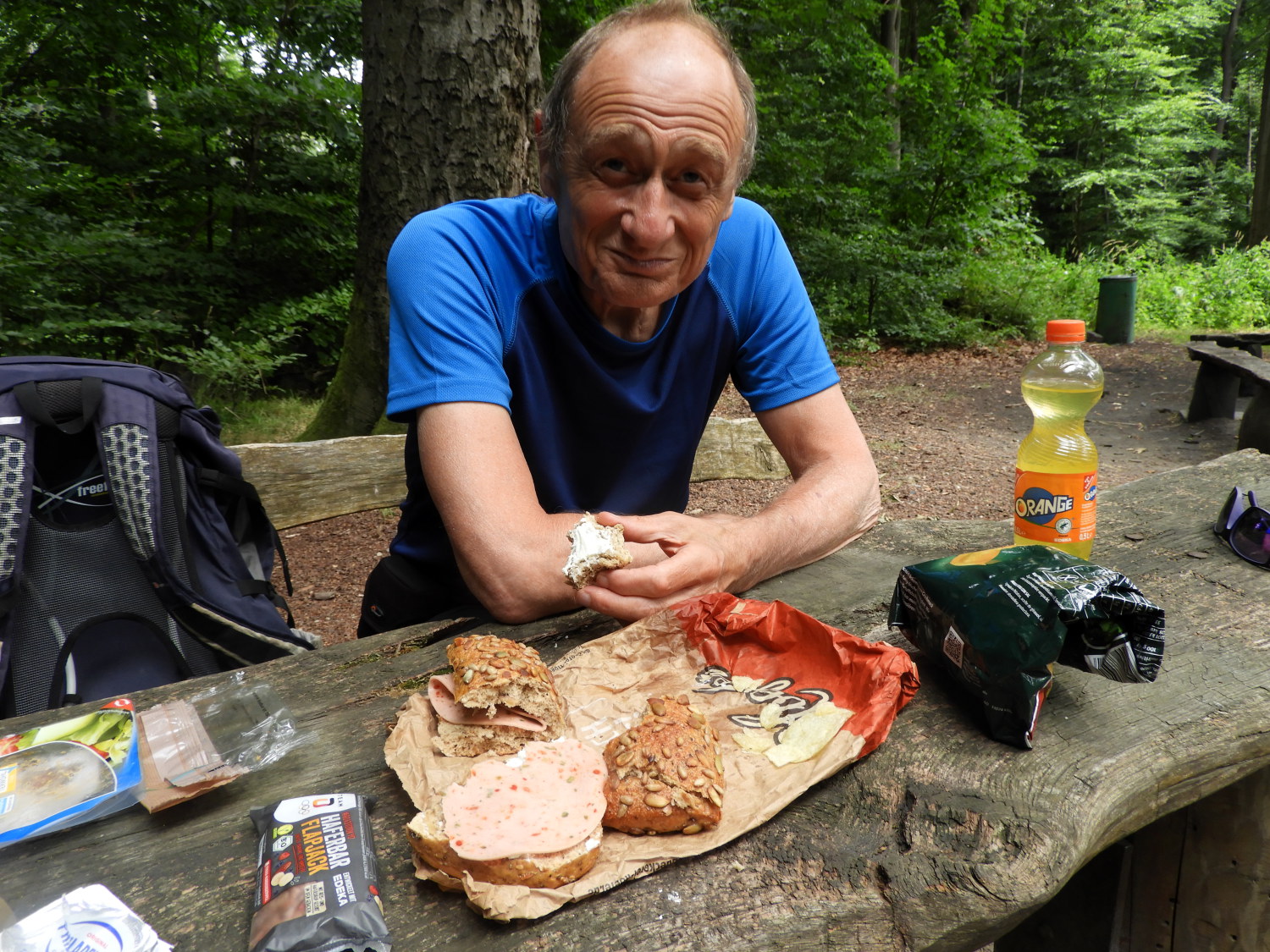 I was already immensely proud of my wife for undertaking this walk. Her first ever long distance undertaking. And here again I was heartened to see her climb into the Andernacher Stadtwald leading us towards Friedrichsborn. It took us one and a half hours to walk up and through the city forest, all of two miles with 300 metres of ascent, which included temporary stops until we reached a sign reading 'Halten den walk sauber' (Keep the walk clean) beckoning our arrival at the edge of forest picnic area at Hochkreuz. It was 12.40pm, time for lunch, Lil and I having walked over ten miles and climbed over 500 metres already. And now it was very hot so we appreciated the last comfort of tree canopy cover while refreshing with the last of our provisions before entering the open of our walk down towards Andernach. 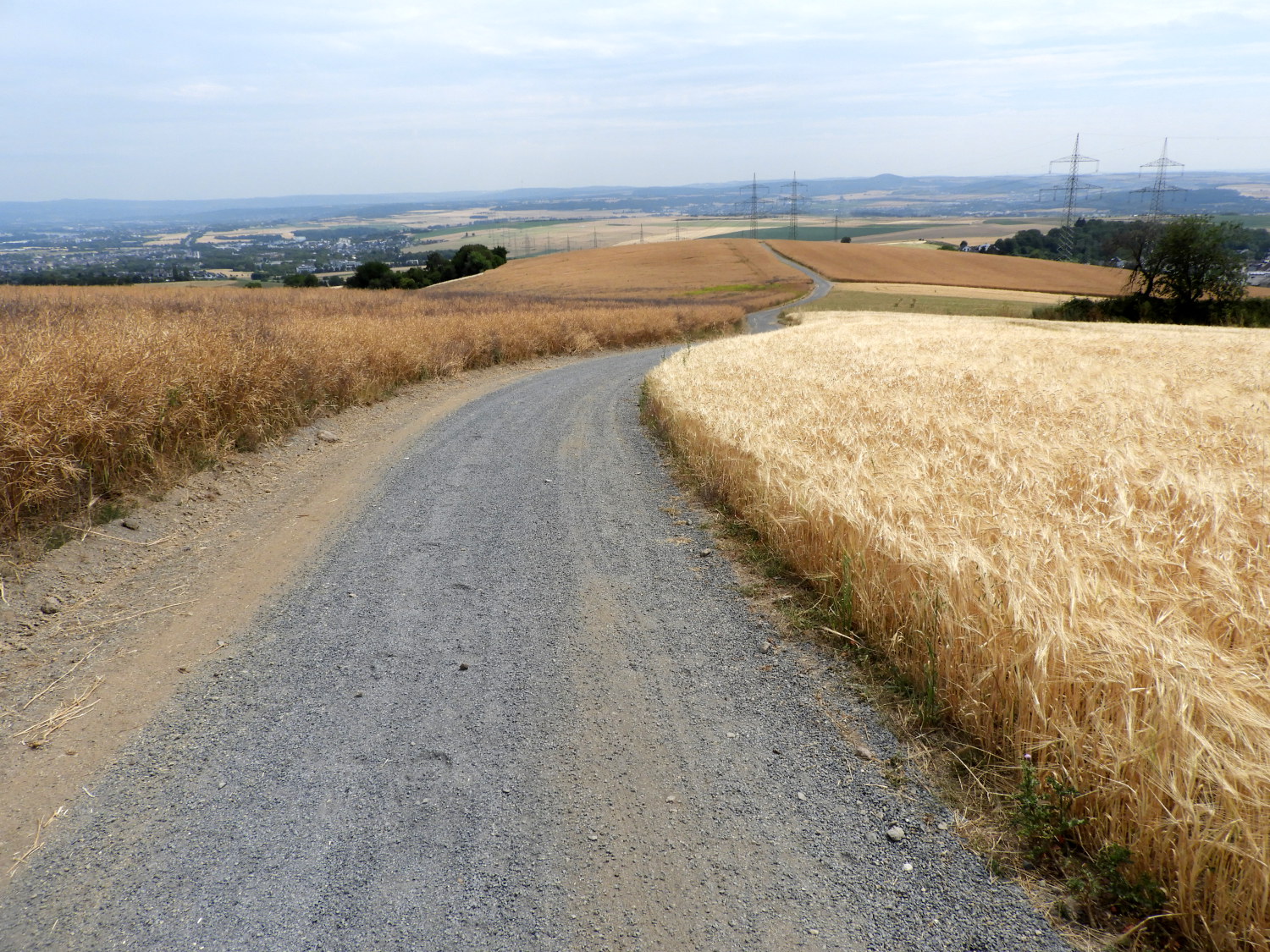 Into the open in the heat of the day 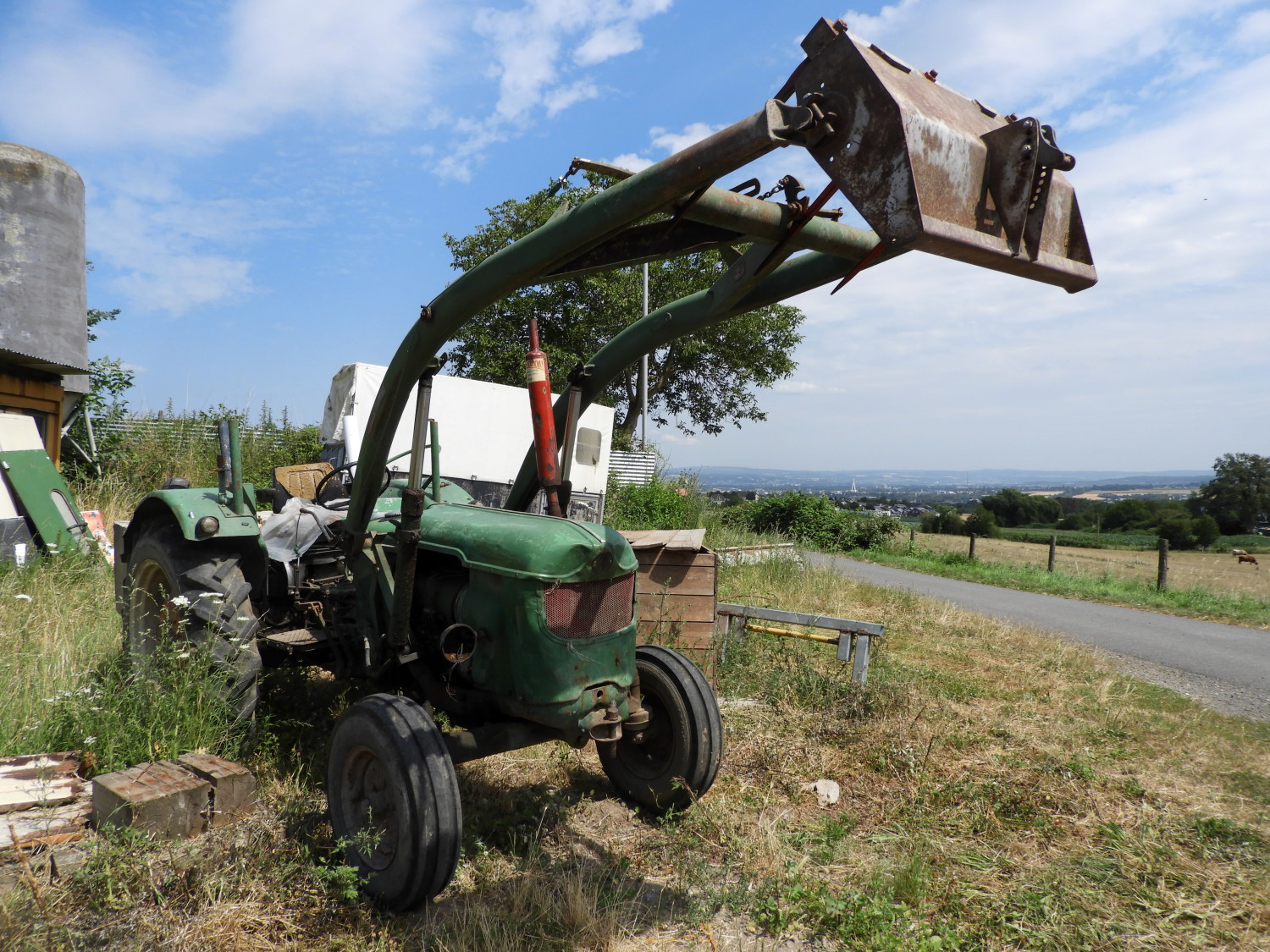 The map and route files show the walk continuing from here to edge past the village of Eich before finishing the stage at a nowhere point on the road between Andernach and Nickenich. Having secured accommodation in Namedy we did not fancy that so I had planned walking to Andernach, getting taxi or train to Namedy and returning to Andernach to resume the walk from Andernach railway station tomorrow. And that is what we did. But not without a struggle. It was very very hot when we packed up lunch and left the forest cover to walk the road between fields of grain. It was brutal ands though we were now heading downhill it was slow going. And to make it worse, the road had been filled and levelled with soft aggregate which gave way every step we took into it. It was like treading through deep snow. Only worse, as it was a walk that threw up dust every step we took. We were so pleased to hit hard tarmac road for a change when we reached the most outer lying farm at Mohlenhof. From here we trundled slowly past a few more farms and stables before beginning the walk of streets into the heart of Andernach. 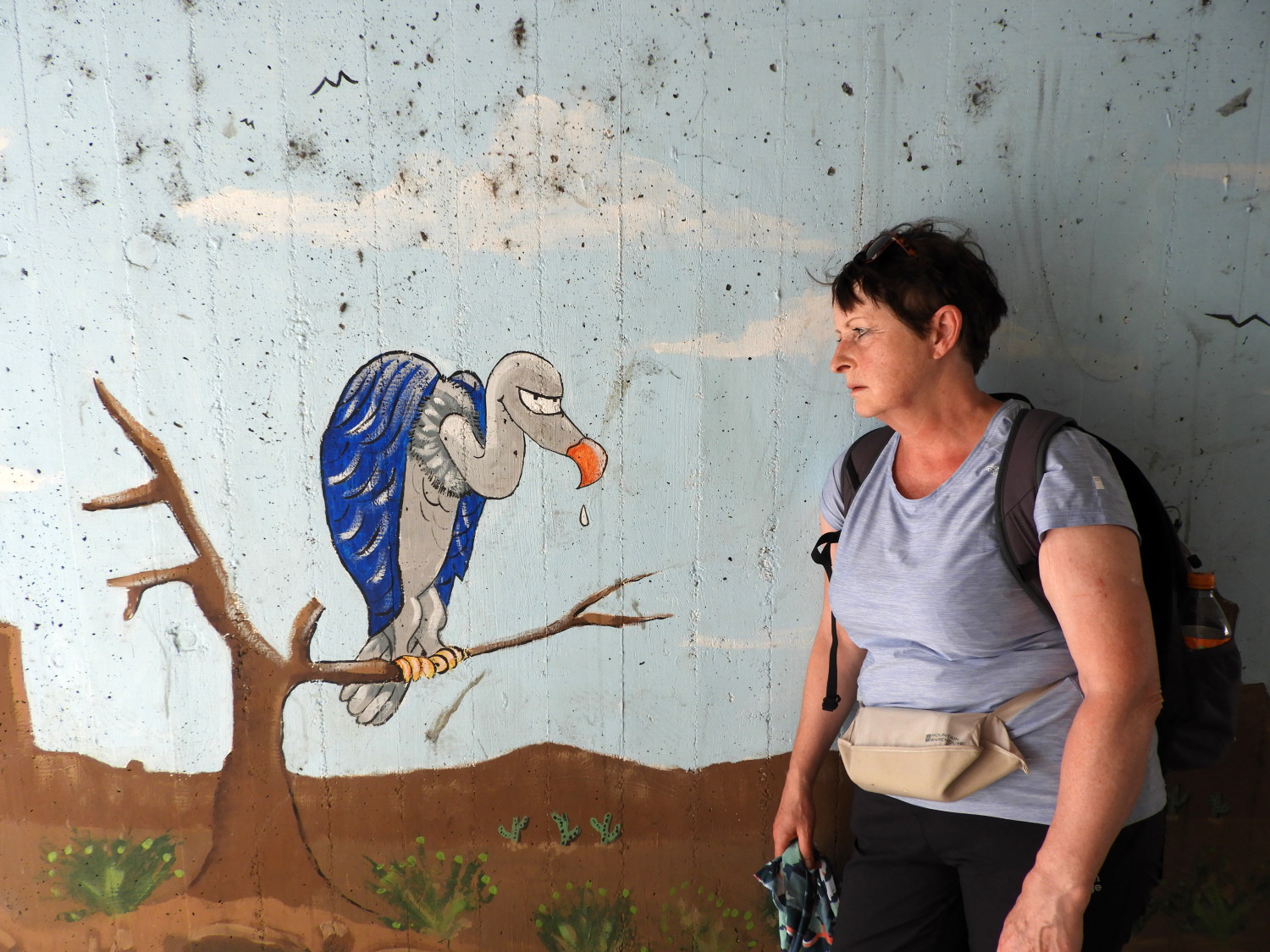 Disappointing the vulture in Andernach 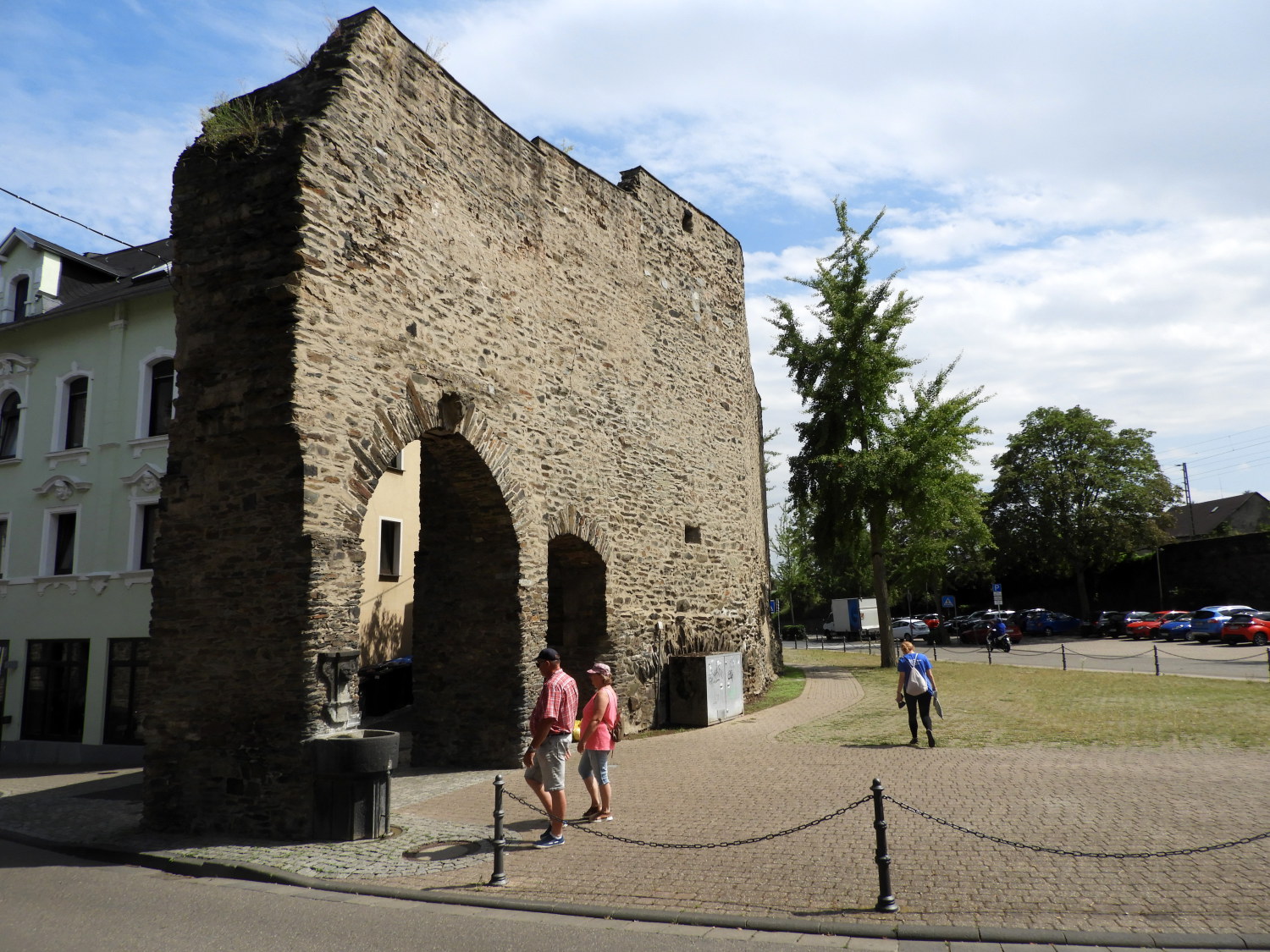 Completely jiggered and altogether proud at the same time we staggered our way into Andernach and on finding the first cafe with an available seat in the market square we plonked ourselves down for coffee, lemonade and cake. It was such a relief to be finished on what had been the hardest days walking of the Rhine Castles Trail so far. After leaving the cafe we found the tourist centre which pointed us to the taxi area which eventually led to a fare to our excellent accommodation in Namedy. Not far from where we had passed at dinner time! With Namedy being a commuter village this led to more fun getting food and drink for the night. Without a shop in the village we needed our accommodation providers kind offer of a lift to get back into Andernach. Once there, for the second time, we stocked up with supplies for the evening and for the next day of walking. Then we took a train back to Namedy' the first of a number we would use to manage our Rhine Castles walk.

It was only after all the comings and goings that we finally managed at around 7.00pm to relax in our home for the night. After washing and changing we enjoyed our just acquired food and drink and it was not too long afterwards that we retired to enjoy a thoroughly good nights sleep. While in the process of retiring for the night Lil and I had agreed that we were very much looking forward to another fantastic day on the walk. It may have been hard today, especially for my wife, but we were both very much enjoying the thrilling adventure. "What next? Bring it on" was our motto.