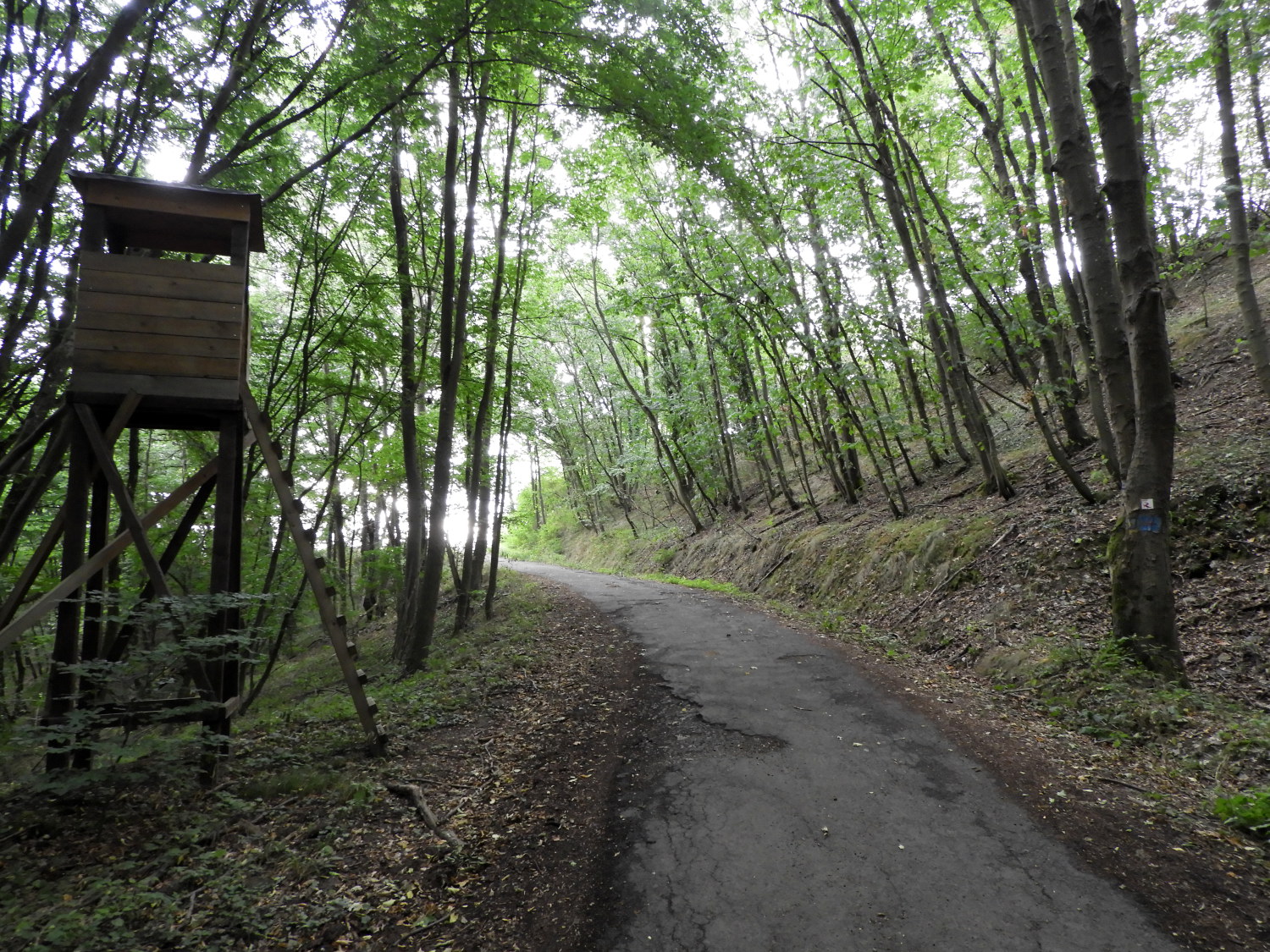 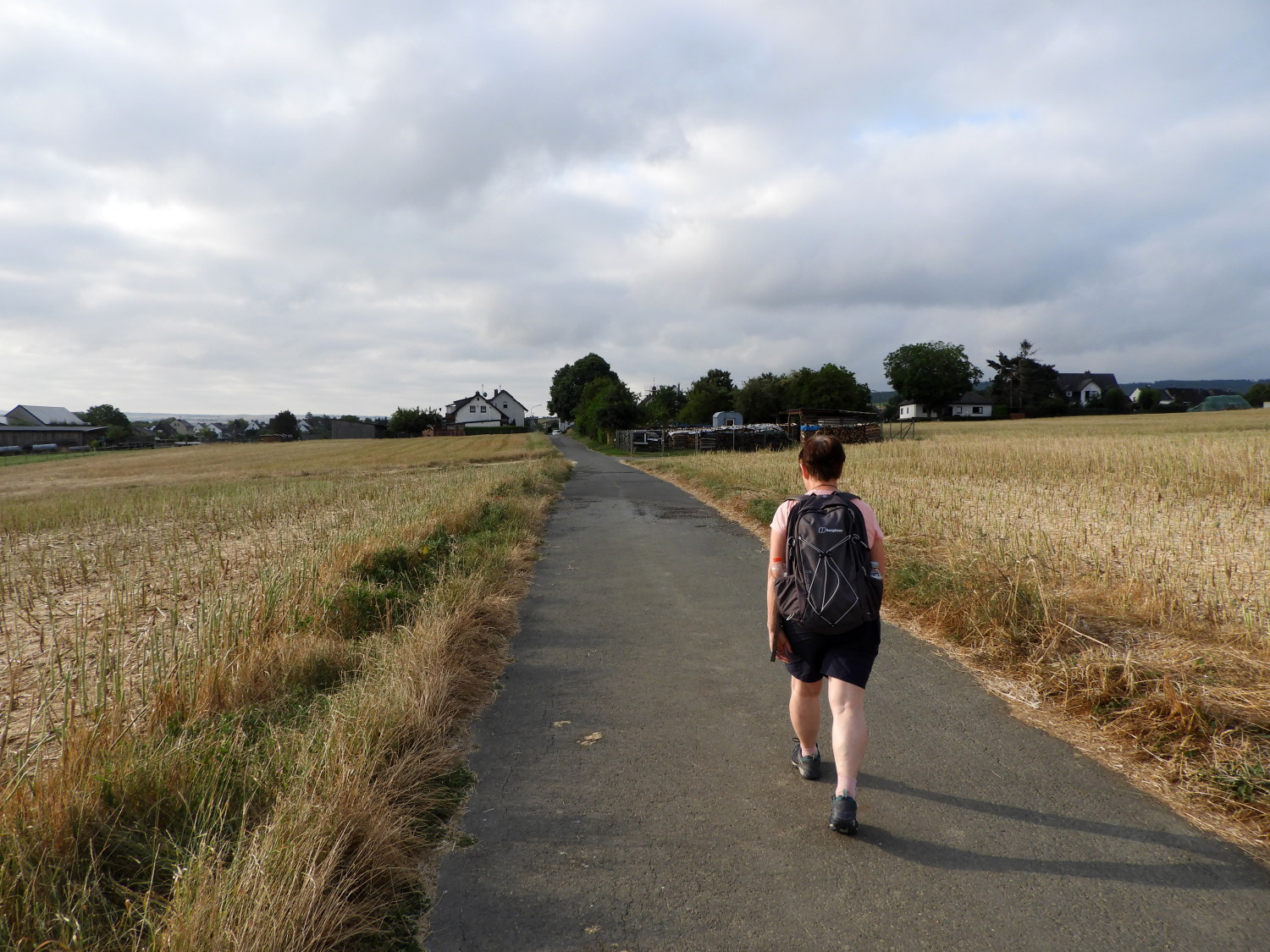 With no breakfast schedule to respect today we could make a very early start. At 7.00am, after refreshing, dressing and after finishing off our depleted supplies on a quick morning snack we were already on the trail, passing the farm shop I sourced last night's dinner from on the way out of Holzfeld. Following the Rheinburgenweg by a few field sides saw Lil and I into Brandswald Forest which was very quiet except for the early birds starting their particular songs. We travelled through Brandswald Forest for a good mile before diverting from the route to visit the municipality of Werlau. It was unlikely we would find a shop for much needed supplies there, but having now exhausted them we had to try. As we had expected it was still waking up to the day ands anyway, there was not a shop to be found. This was now becoming a familiar theme. Just as back home, the smaller communities are losing their local amenities. 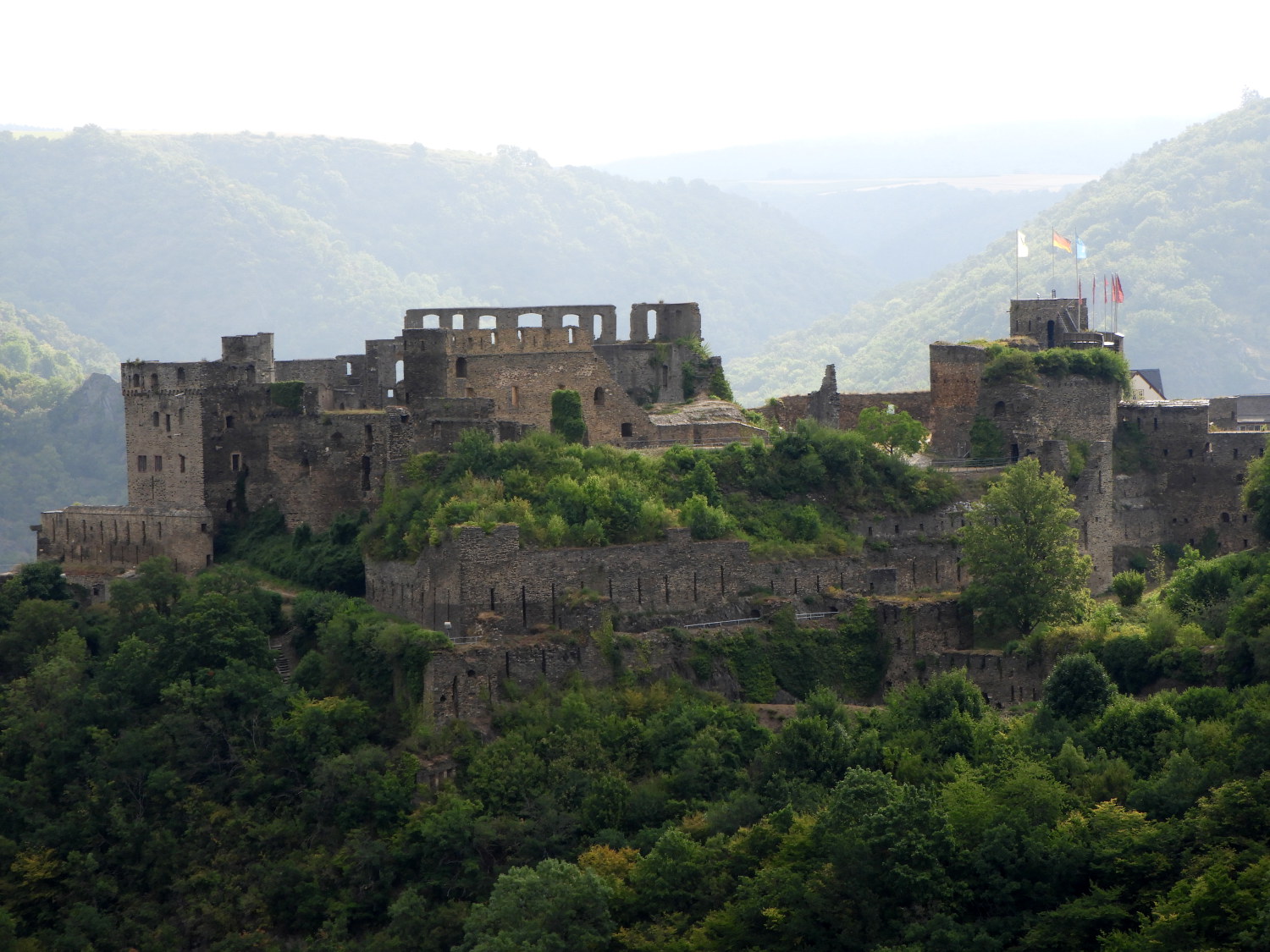 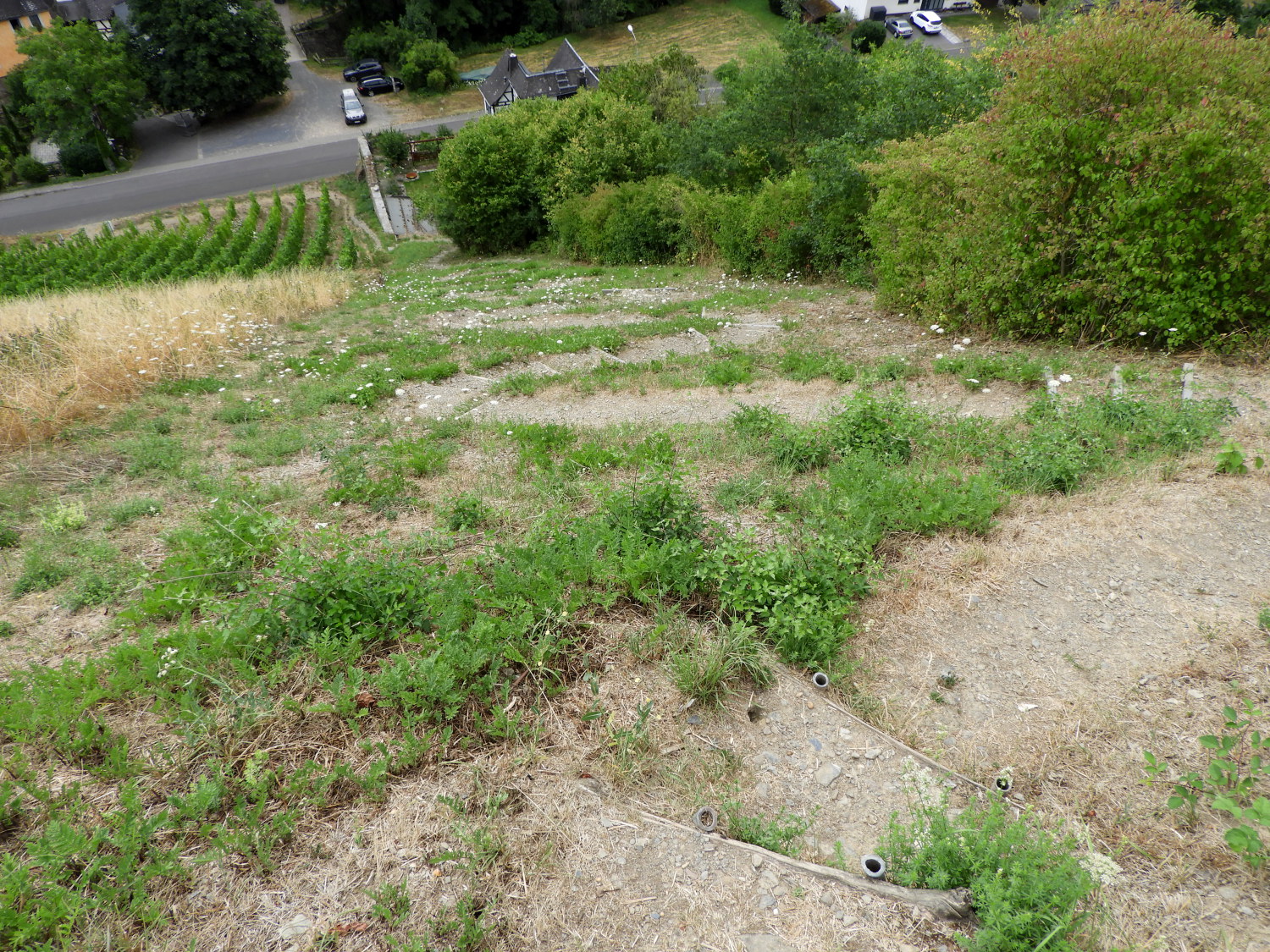 The steep zigzag descent to Grundelbach

Once through Werlau we put our focus towards Sankt Goar which was a short distance by following the Rheingoldstrasse road. Over a bump of a hill gave us the most glorious first sight of Rheinfels Castle, by far the biggest we had seen on the the Rhine Castles Trail to date. Promised a least a couple of castles every day to the finish now, this was an impressive first. To reach the castle though we first had to make a steep descent to the Grundelbach road and then a steep ascent thereafter. Our descent was made by a series of zigzag switchbacks down a grassy bank. We took it very slowly, carefully edging our way down. Accelerating was not a good idea, such was the slope, we would not have been able to stop. 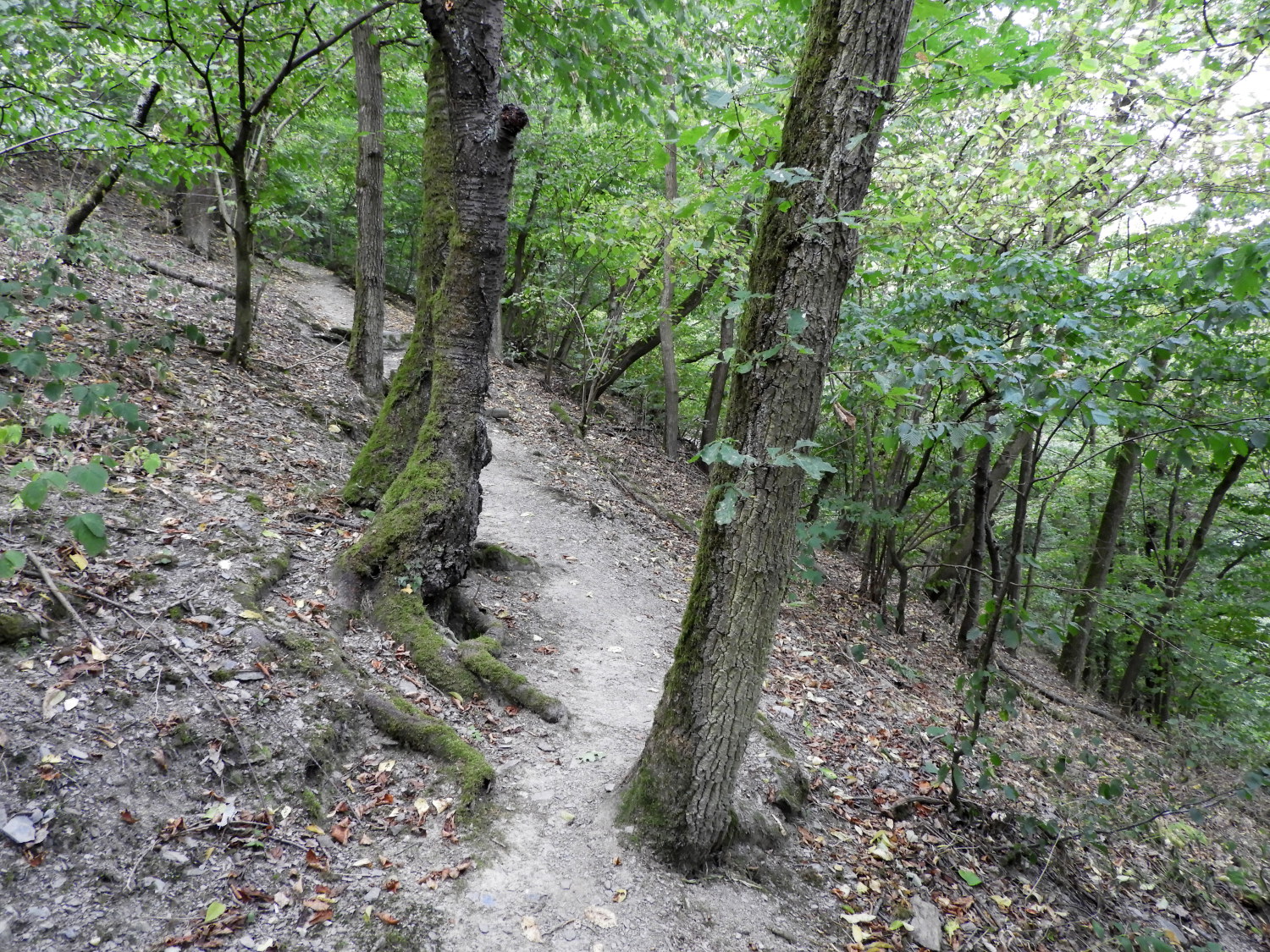 On the climb from Grundelbach 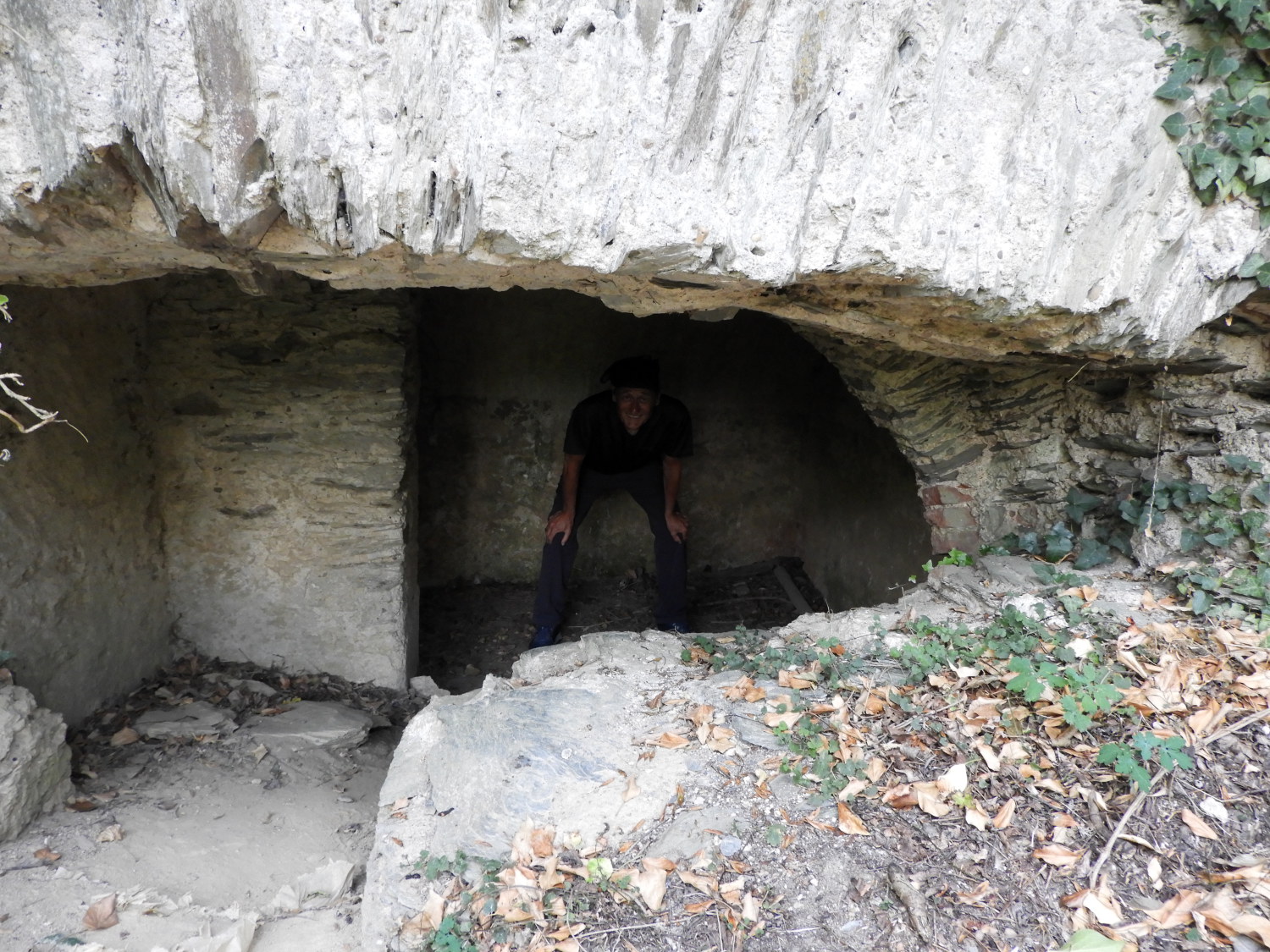 Cold store below the castle?

The climb from Grundelbach to Gut Rheinfels road leading to the castle entrance was a lung sapping eighty metre ascent which we made in our usual series of starts and stops. The first part of the climb was on a woodland path and the second half of our ascent by way of going up steps and along boardwalks. Here, directly beneath the castle, were a couple of small chambers cut out of the base rock. Probably for cold storage in times past. Possibly the home of the local hermit. 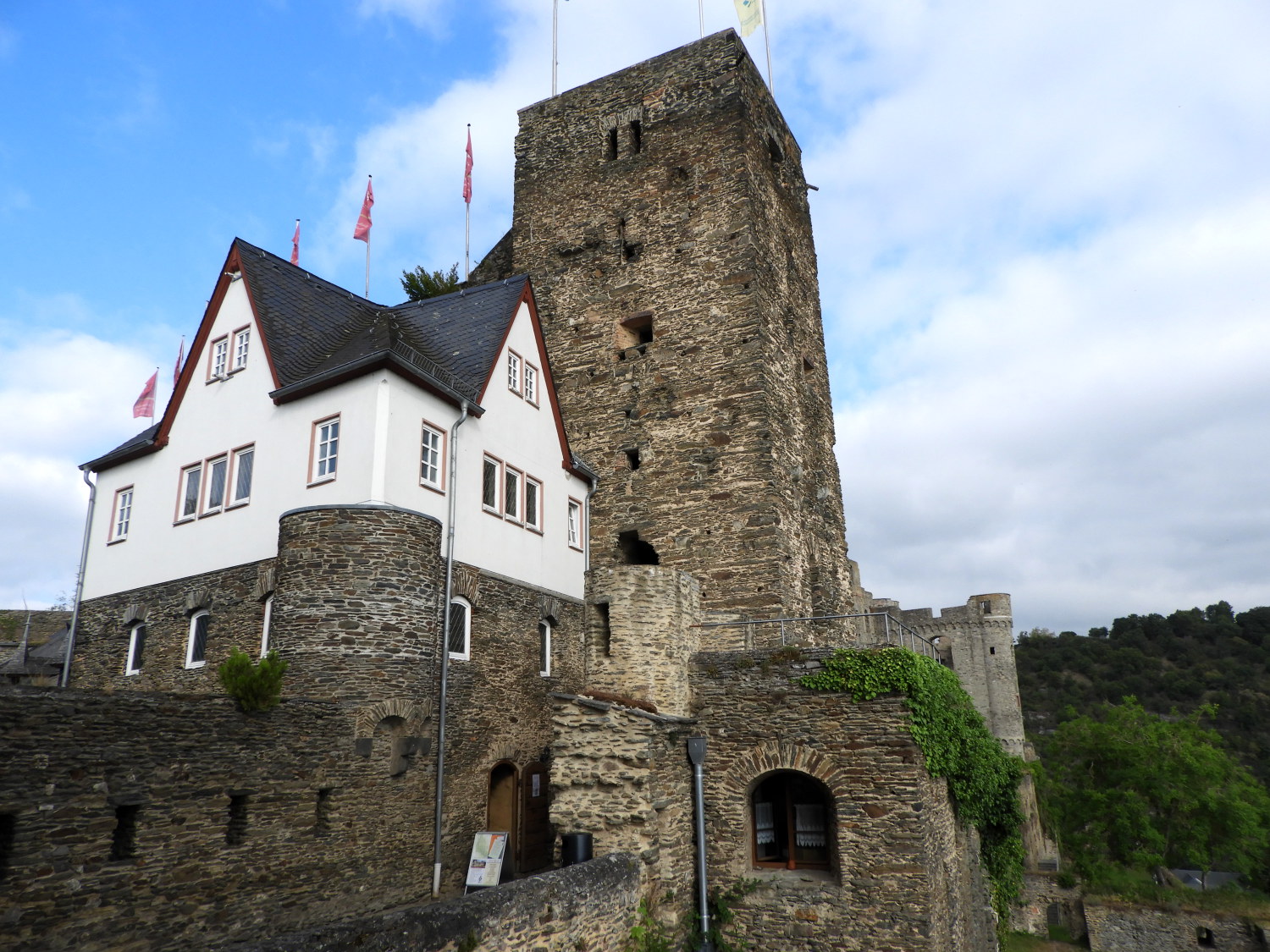 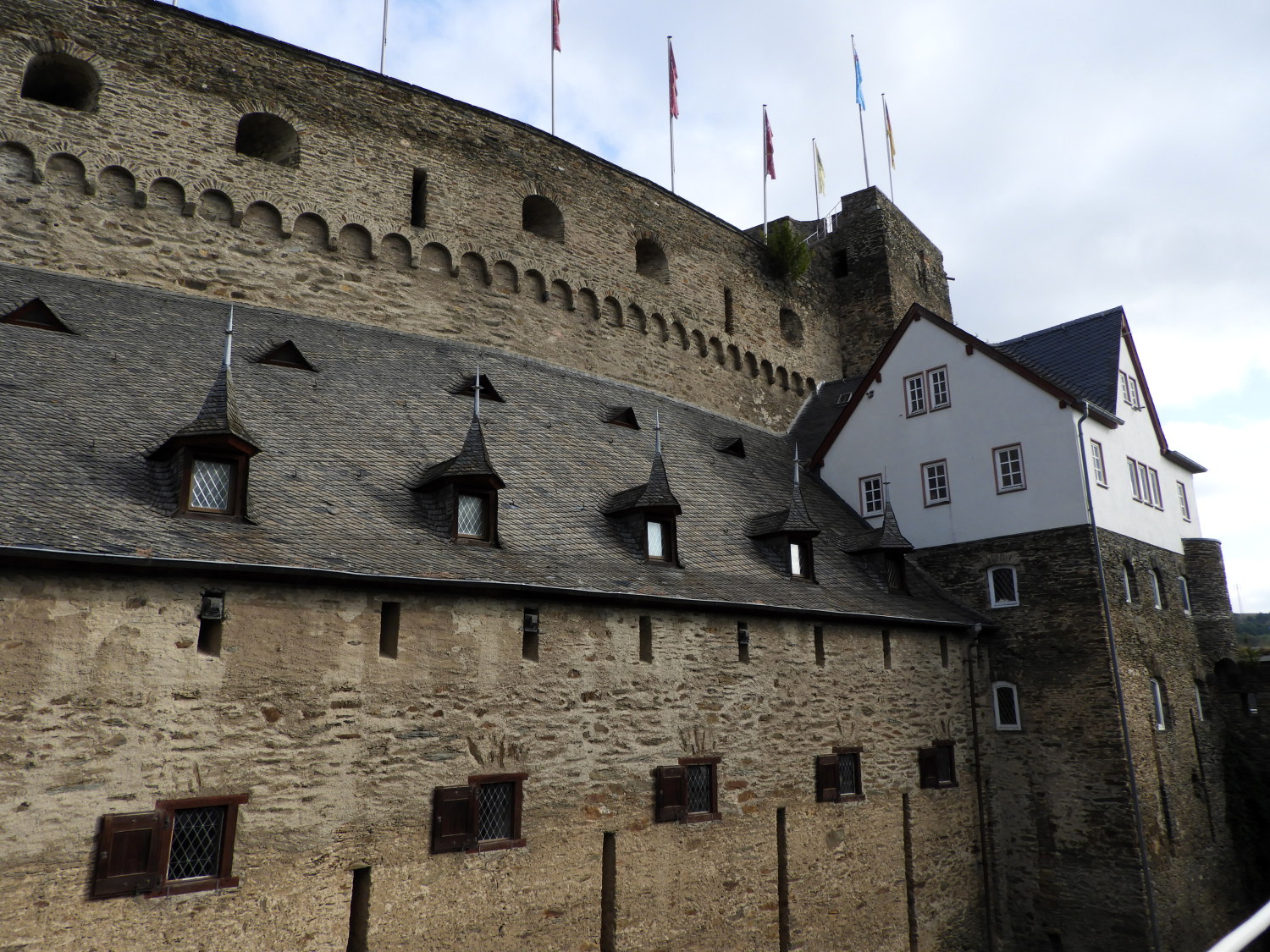 Rheinfels Castle was originally built in the thirteenth century and in its history, after expansion, it was the largest fortress in the Middle Rhine Valley. We took some time out to take a look around the outer grounds. Within, the castle now houses a museum and a hotel, which on hindsight we should have visited for breakfast or at least refreshments. I wanted to go a move on though and having took our look around the castle grounds we walked back along Gut Rheinfels, leading to Schlossberg and into Biebernheim, the high town above Sankt Goar. 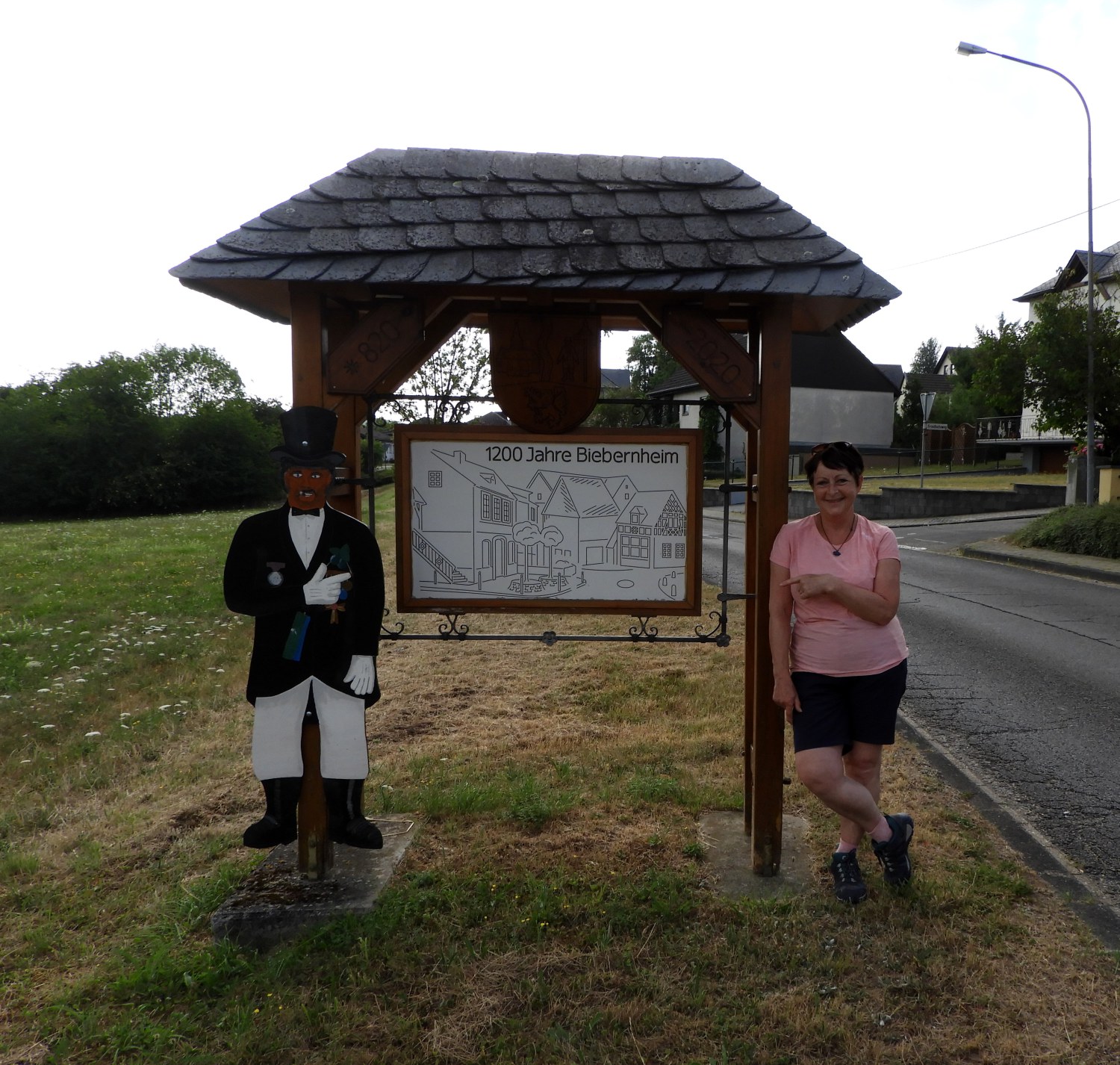 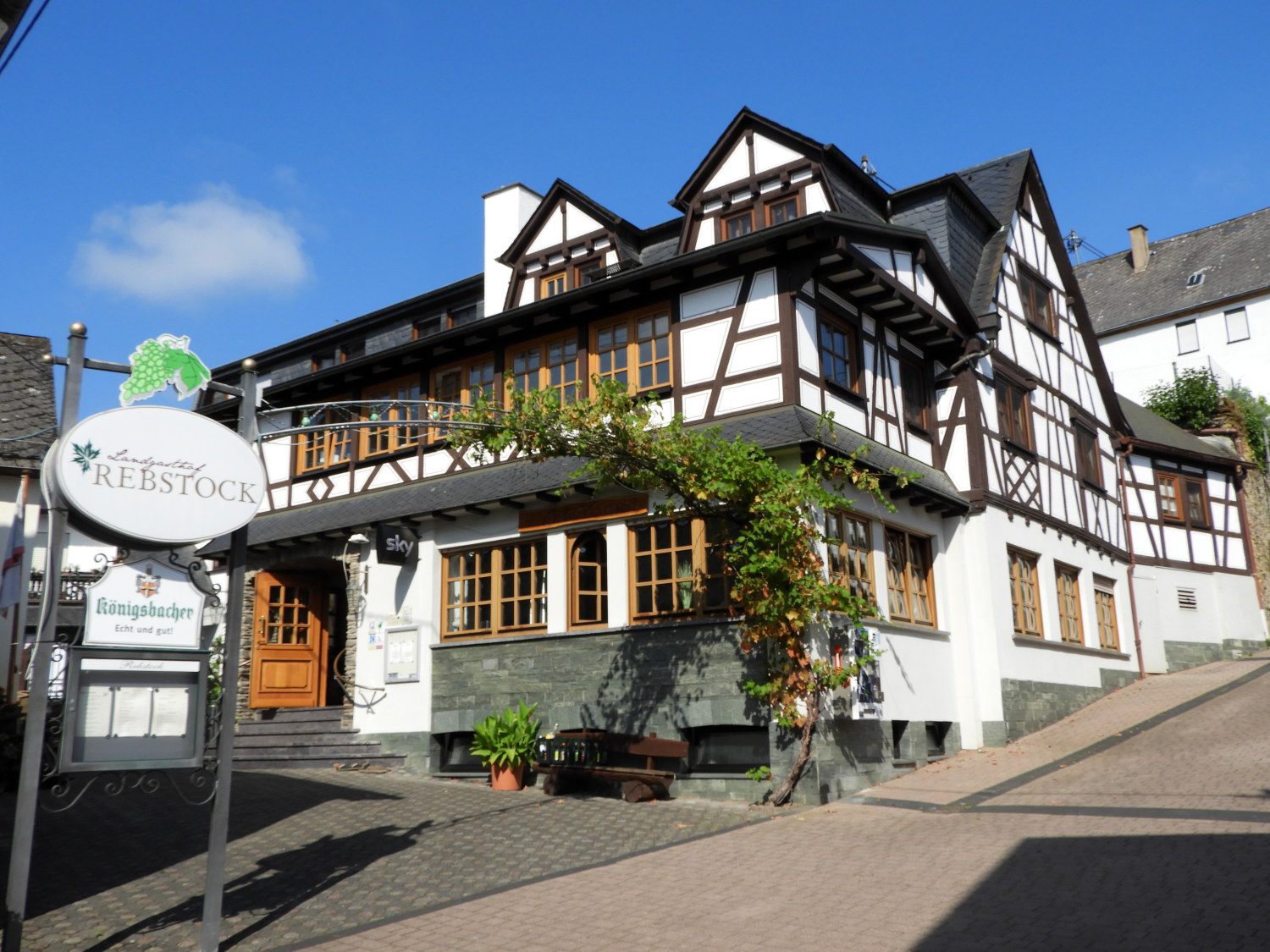 Most of the time I make a diversion on a walk for good reason and it works out. Most of the time. However sometimes it goes wrong, and though I will have made the decision to detour in the best intentions, it does not work out. And this time it did not work out. Bieberheim looked a large enough place to have cafes and shops. Perhaps a few. In the event it did not have any. Except for the Landgasthof Rebstock Hotel which helped out a little supplying us with bottled water and with just one shop which I found by following Google Maps. "Drat, damn and blast" I said when we found the shop which was in reality the room of a house. It was shut but with the biggest slice of luck the shop lady was restocking as I looked around for signs of life. In desperation, for we were very hungry by now, I knocked on the door and went in, asking if it was possible to help us out. Luckily she was kind enough to open just for us and five minutes later we were sat on a park bench heartily eating our way out of the onset of fatigue. That was close. What I should have done was keep us on the path from the castle and drop to the Rhine side in the touristy Sankt Goar. Surely there would have been cafes and restaurants open there. All I can say that it was done in good faith to save us a fifty metre descent and extra fifty metre climb thereafter. 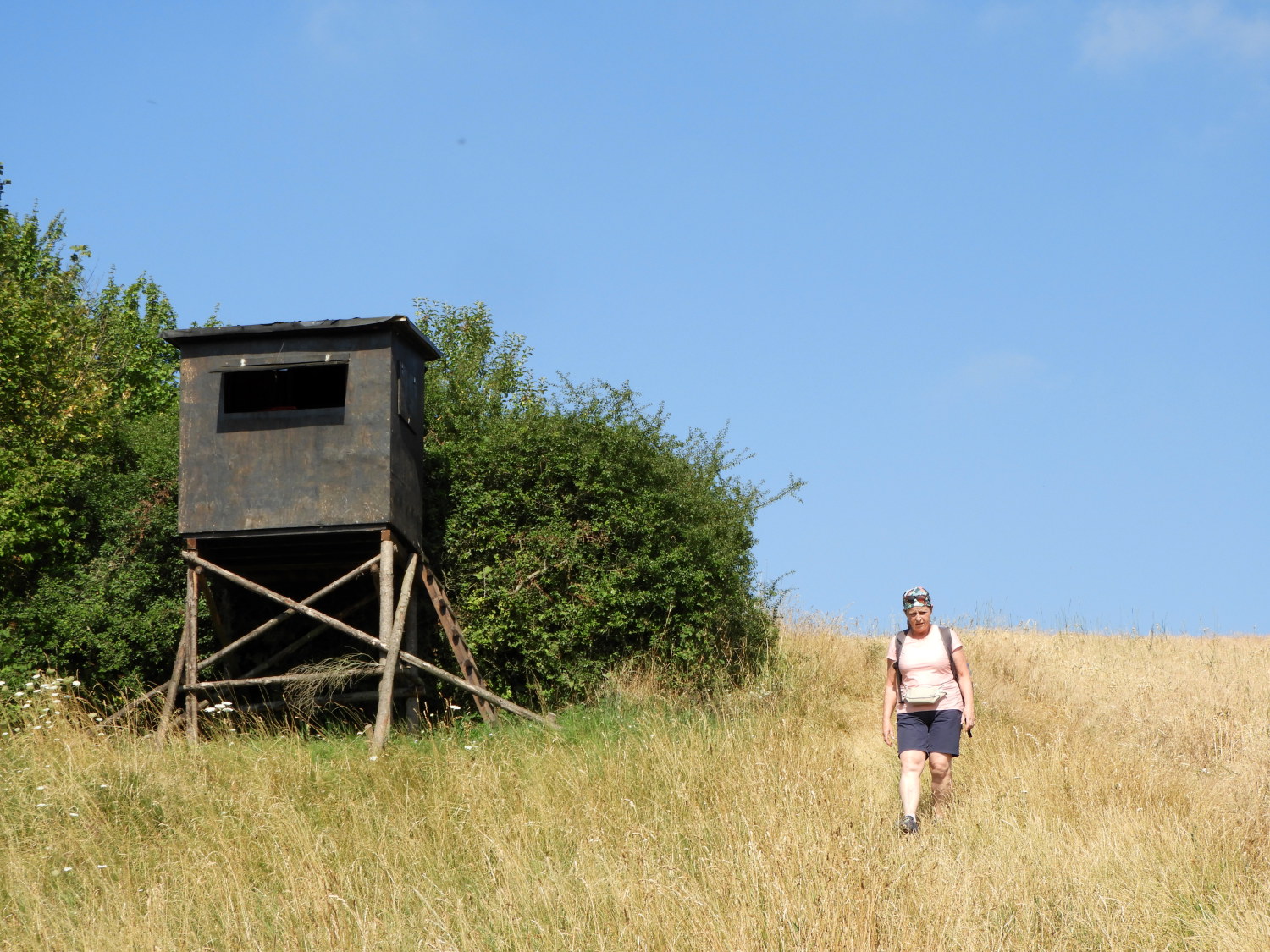 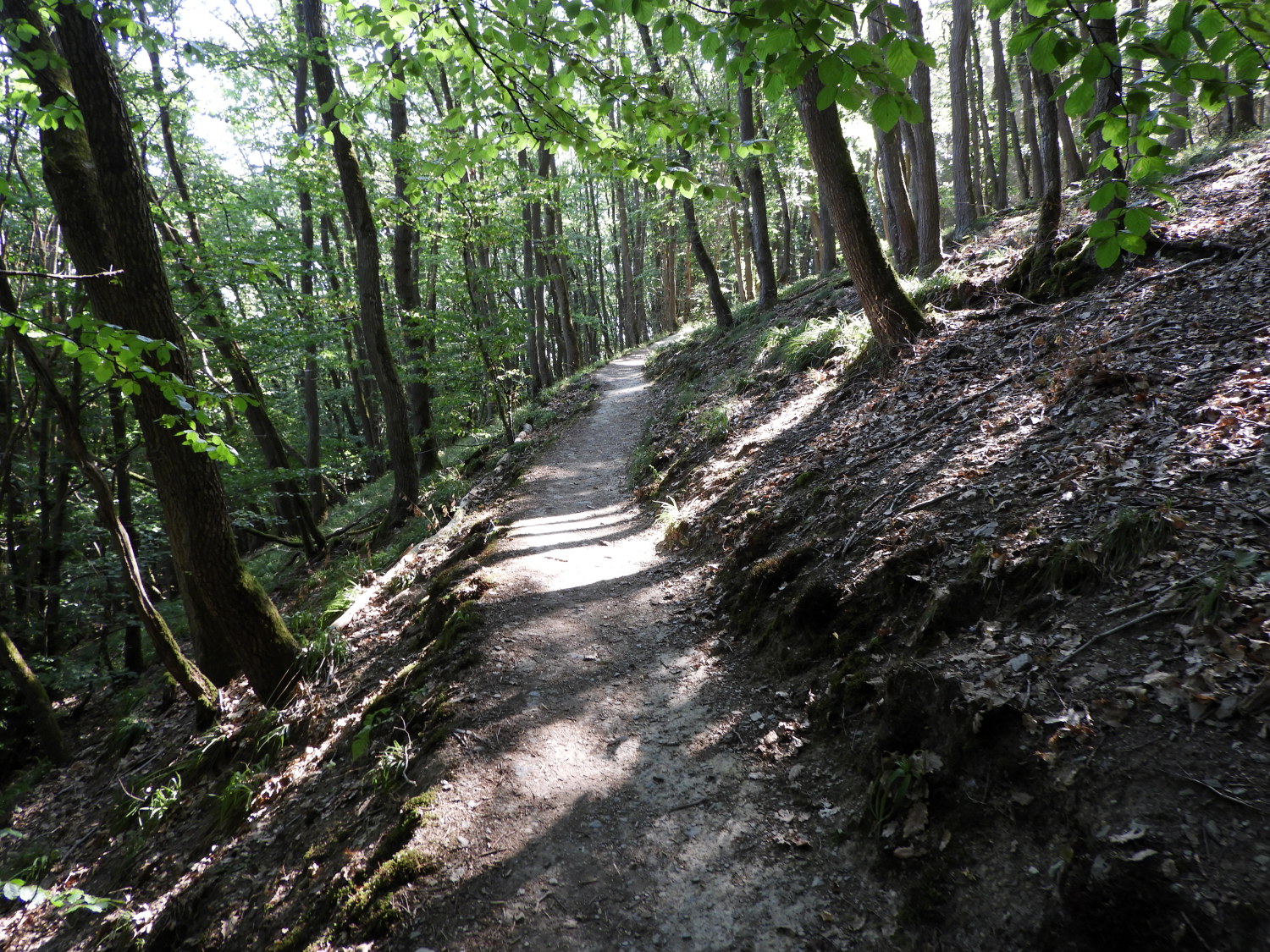 On the path near Urbar

Back on the trail refuelled and rejuvenated we followed a section of the Rheinsteig, the Flora and Fauna Nature Trail between Lahnstein and Kaub. In the more open parts of the trail we could see Burg Katz shimmering in the heat haze, The castle, on the far side of the Rhine is now a private residence. Next we came to a ghoulish sign on the trail showing Katz Castle and some gallows, with text reading 'Galgenhoh. Die Richtstatte liegt zwischen Steinbach und Galgenbach. Diese statten lagen meist on der Markungsgrenze van Orten mit eigener Blutgerichtsbarkeit und wurden zur Abschreckung gern ouf sichtbaren Hugeln aufgestellt.' which translated to "Galgenhoh. The place of execution between Steinbach and Galgenbach. These forts were mostly on the boundary of places with their own blood jurisdiction and were often set up on visible hills as a deterrent." I am so glad humanity has moved on from such disgusting spectacles. Here, our sight was on the beauty of our surroundings which never disappointed. The woodland trail was as lovely as ever. 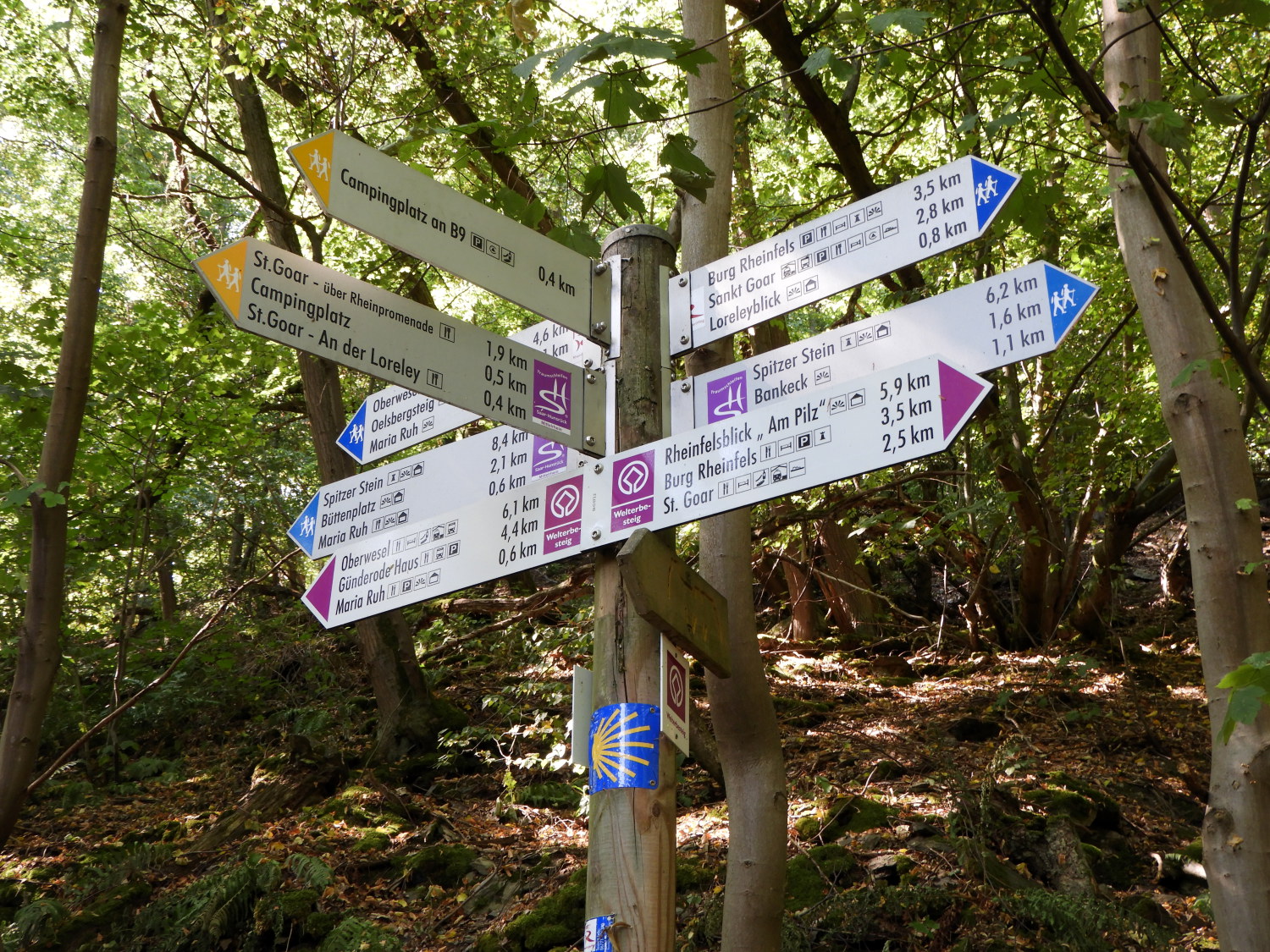 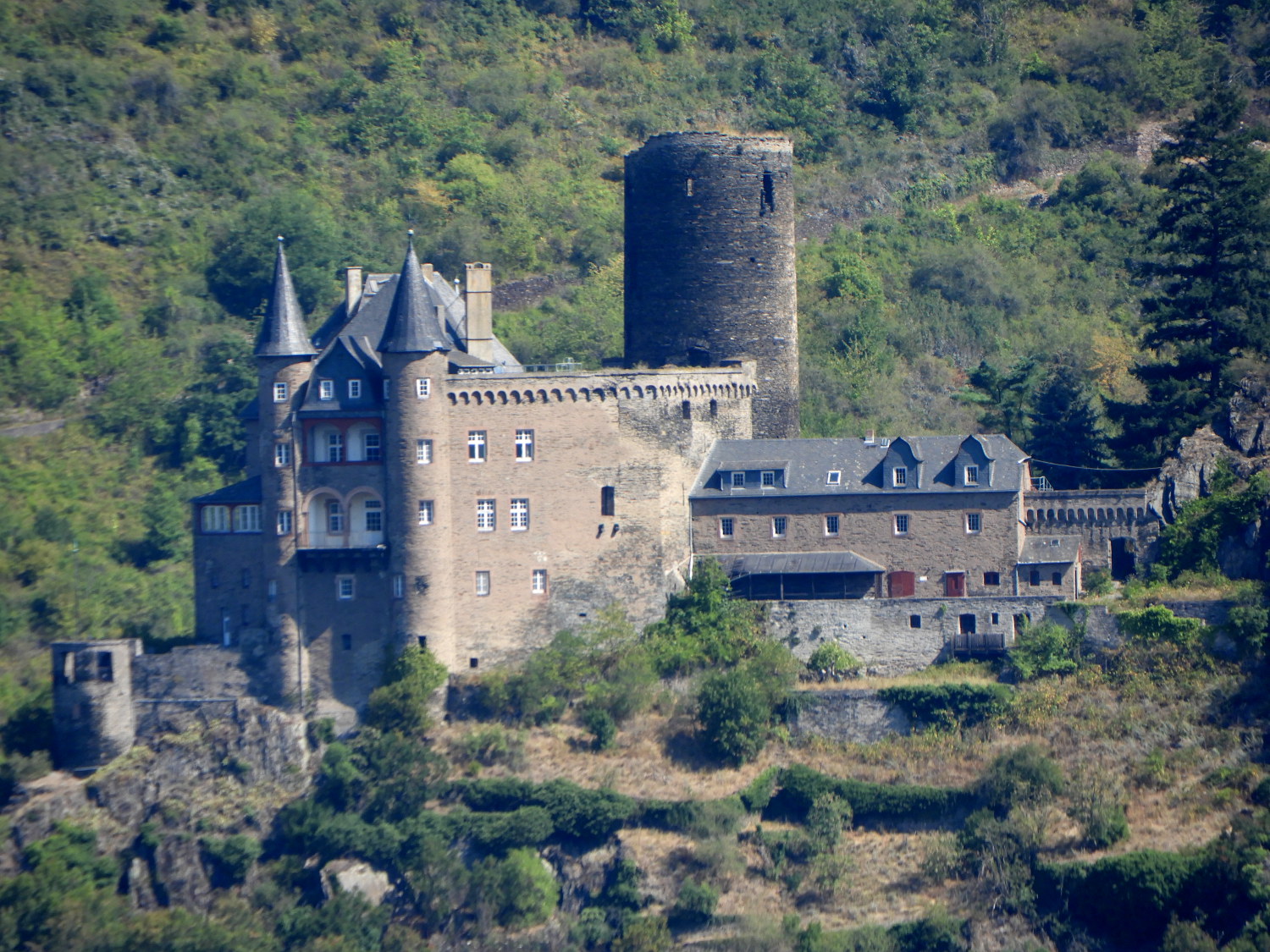 More views of Katz Castle were enjoyed on the way towards the Rock of Lorelei which I was now anticipating but before getting there we came to another of those impressive waysigns, this one having no less than twenty two destinations indicated. All with distance to them. These included a couple of options back to Castle Rheinfels by way of different paths but both 3.5 kilometres in distance. There were two options to Sankt Goar too, one 2.5 kilometres and the other 2.8 kilometres. Oberwesel, our destination for the day was now just 4.6 kilometres on with Lorelei just 0.8 of a kilometre. Just a little way on from the sign, approaching the viewpoint for the Rock of Lorelei, we heard English being spoken. "Hello there" I said. "Hello" was the reply from the gentleman of the couple. Near the Rock of Lorelei, of all places, we met a couple from Ripon, the neighbouring town to our hometown of Harrogate in North Yorkshire! 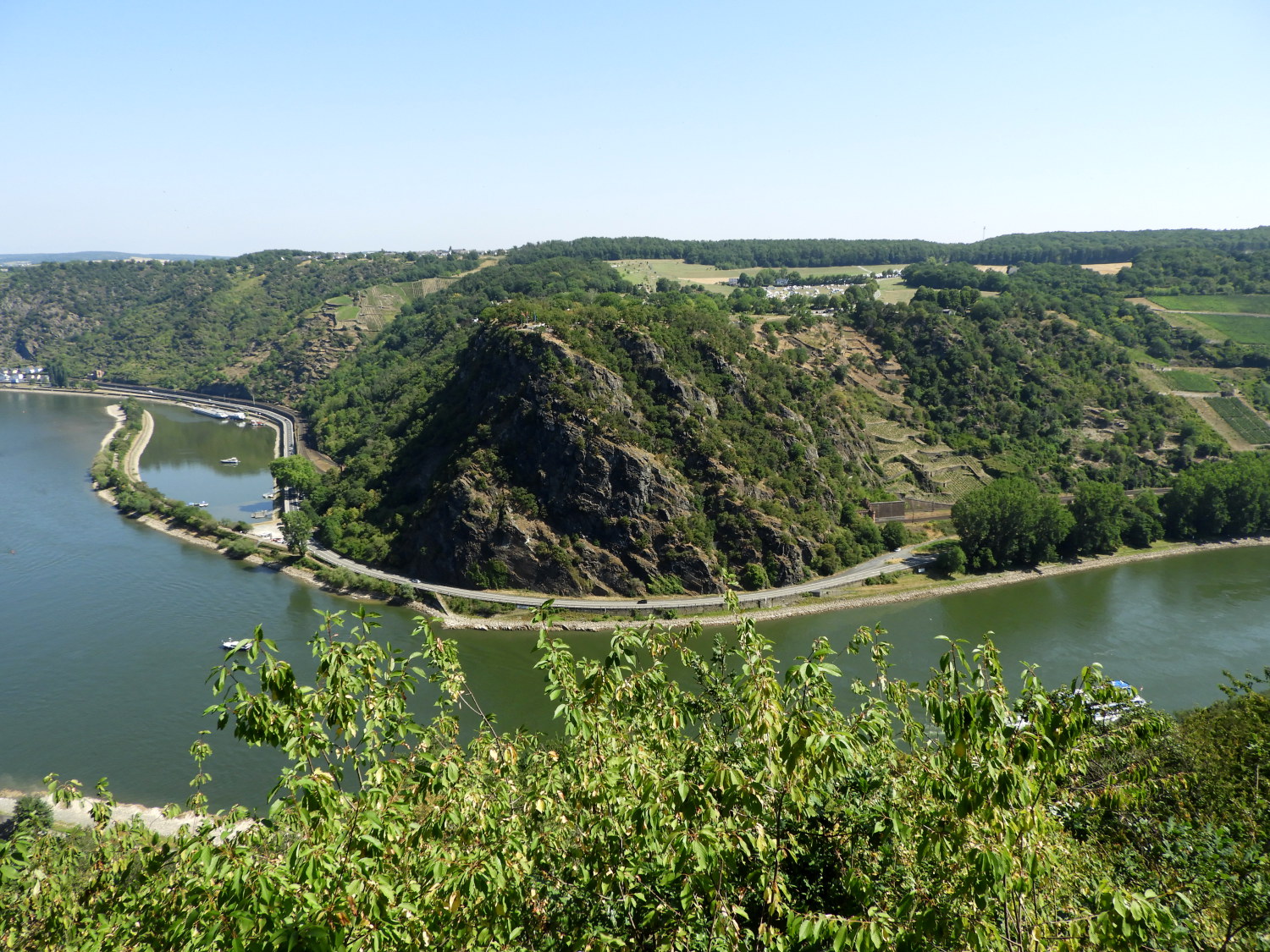 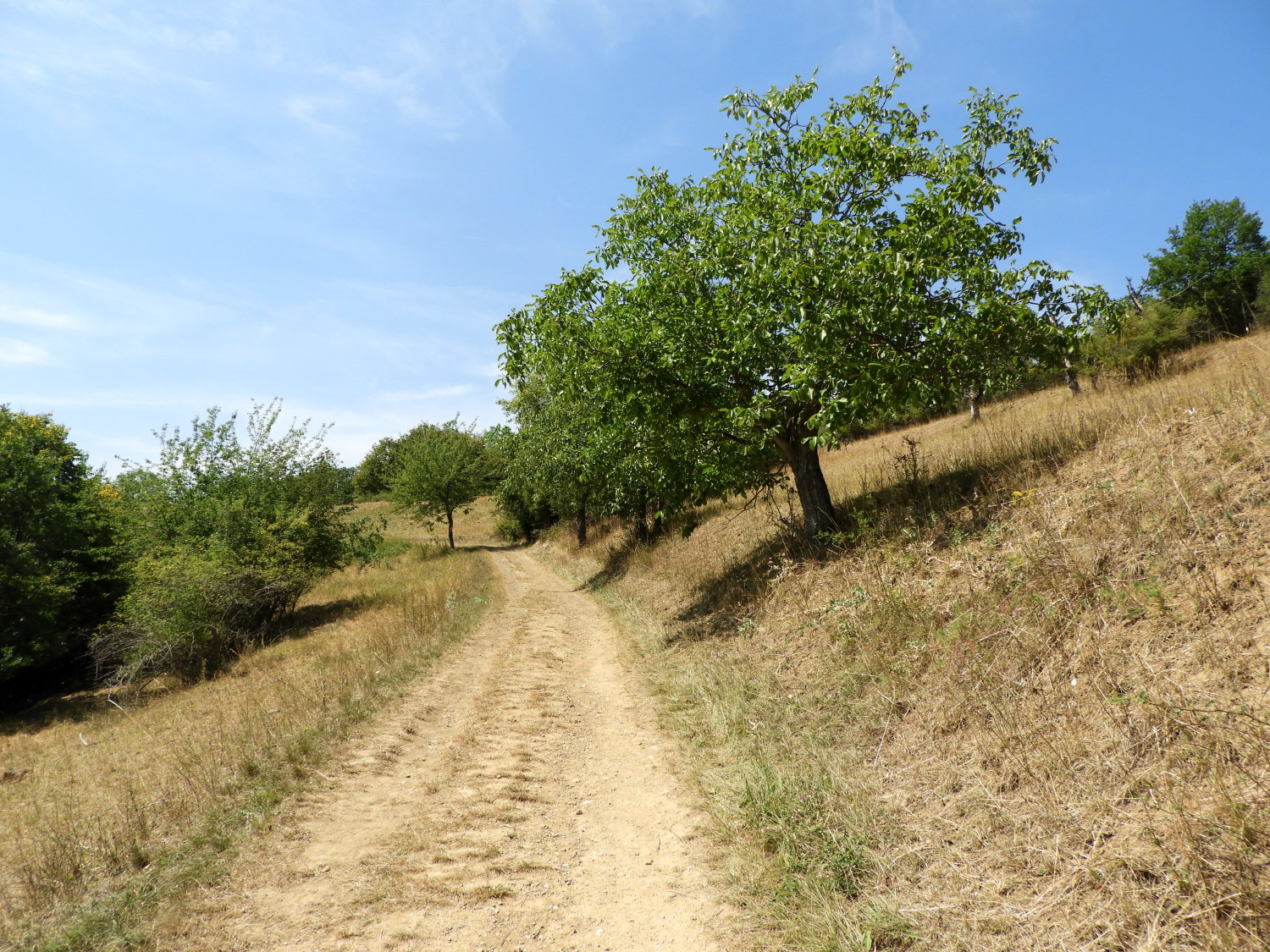 The heat was becoming oppressive beyond Lorelei

Due to the distraction of Lil and I chatting to our local folk I missed spotting the Lorelei Statue before being beyond it but the Rock of Lorelei was not to be missed. Such is its overwhelming presence and prestige. The large outcrop, jutting out into the Rhine and squeezing it to its narrowest point in this part of Germany, is a place of folklore and fierce reputation. Called the "murmuring rock" because of sounds supposed to emanate from it, there was no quiet today. A band was practicing for an evening performance on the hills beside the rock and the thud of drums was ever present. Which was quite appropriate in a way, making a grand statement for us. We stayed nearly an hour at the viewpoint across the water from Lorelei, part chatting with the Ripon folk who were there too and part just looking out over to the great sight. Then, around noon, we moved on. Stepping out into the open after a late morning of cover we realised it was getting hot again. Really hot. 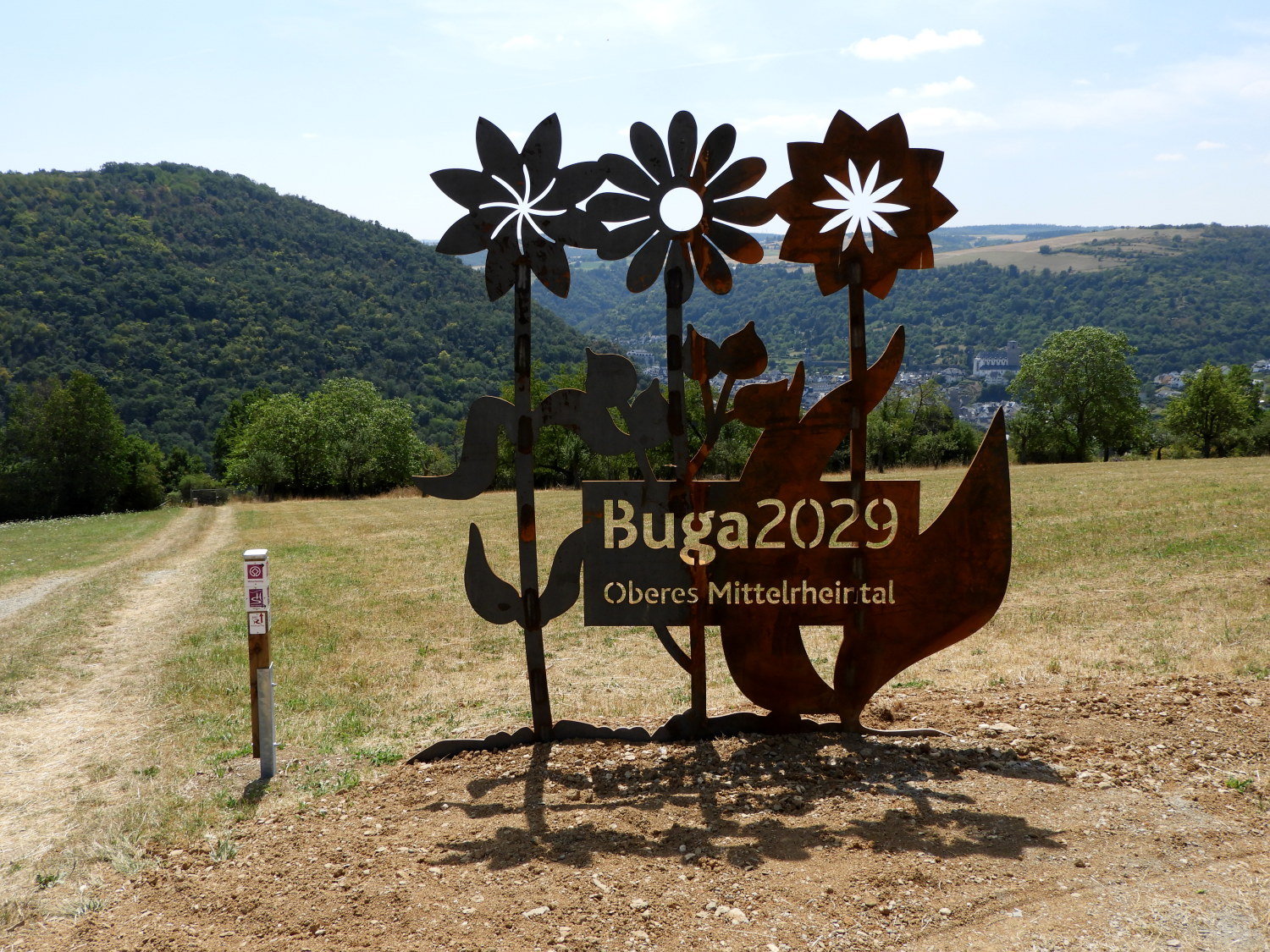 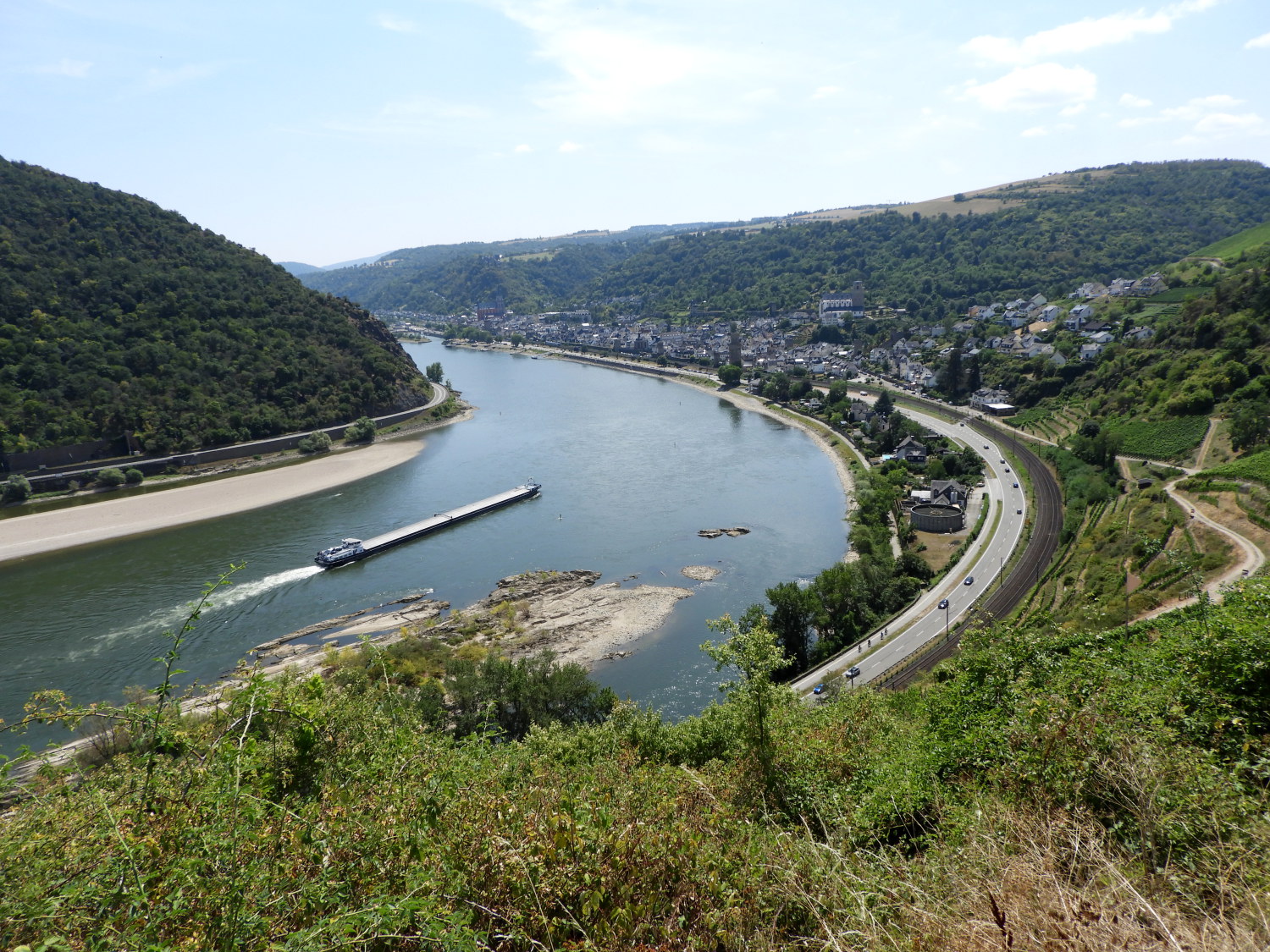 View of Oberwesel from Trollpfad

Walking along the tops, skirting around the east side of the municipality of Urbar was tough with the temperature rising towards forty degrees celcius again. The severe heat of last weekend in Koblenz was returning. In fact it was to stay hot for the rest of our walk and we would seek shade whenever possible at the high sun times. Right now though, with heat blazing down on us, without the cover of any woodland shade, and forced off the route by a diversion around a vineyard. it was really unpleasant going. To say we were overjoyed to spot our finish of Oberwesel for the first time is an understatement. But we still had to get there. Walking through Skulpturenpark Oberwesel - Urbar after the diversion took us some way but we did not linger too long at the art works. We were rather keen to get into the woodland we could see beyond the park. 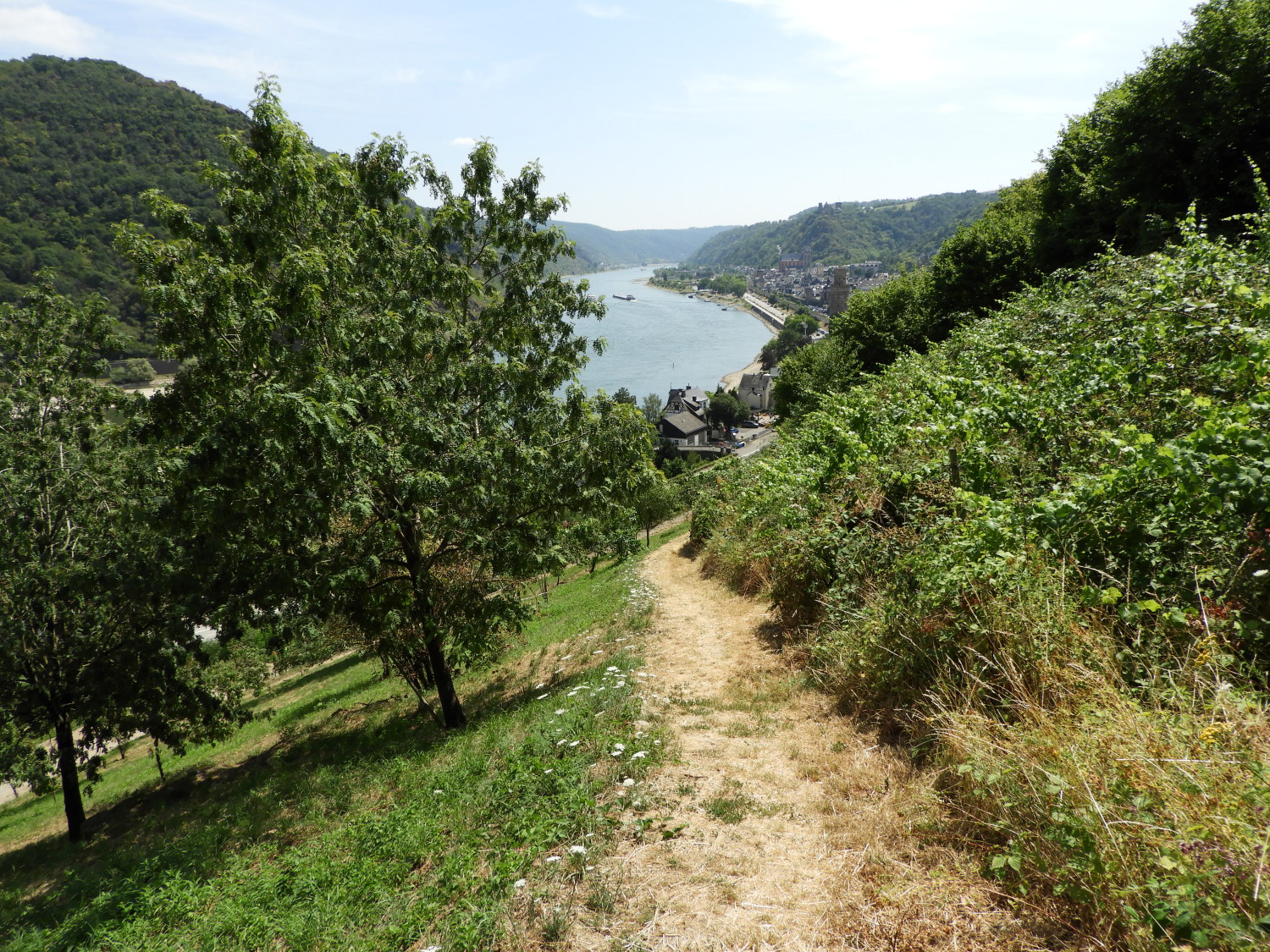 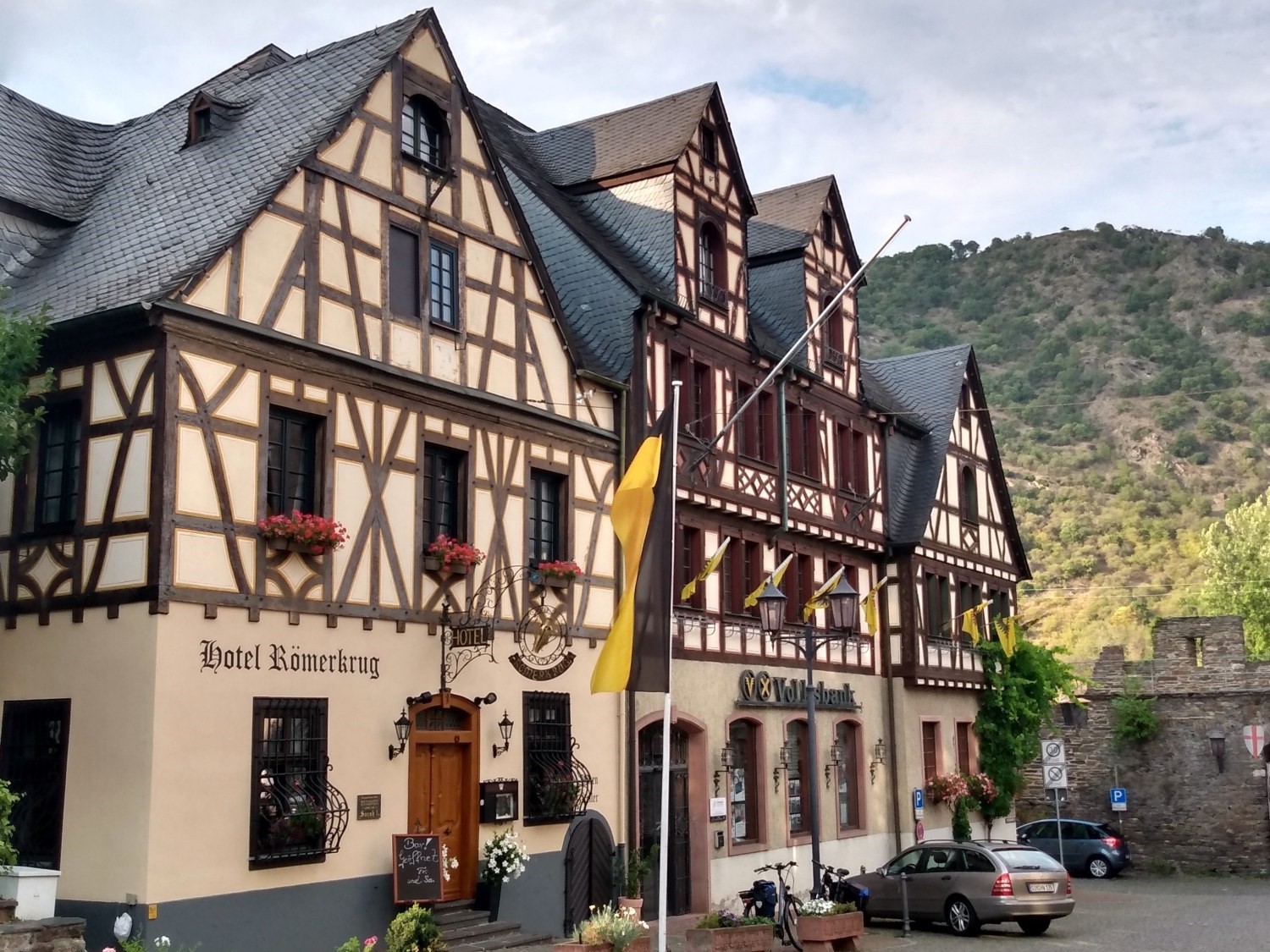 The heat of the early afternoon and the combination of setting off early and eating at irregular times was putting us into fatigue now. While I am used to situations like this and coping, Lil is not. She was a grumpy girl as we made the descent into Oberwesel. Once down by the Rhine and on the walk into town I promised her we would stop at the first cafe but on seeing the map and knowing our hotel was only about 400 metres away I kept going. "We're nearly there" I said. More than once to keep her going. And then we were there, outside our hotel. Where there were tables and meals being served. I took off my backpack and immediately sat at the nearest table, ordering two cool non-alcoholic wheat beers before Lil rounded the corner to sit with me. She plonked herself down exhausted.

Forty-five minutes later: Lil says "That is the best Thai meal I have ever had". I agreed it was good. Then, after checking into the hotel we went to our lovely room and rested until the evening. During the evening we went out to sit beside the Rhine and drink some more beer. "What's that" says Lil, spitting something out. She adds "Talk about there was a lady who swallowed a fly. I have done one better, that was a wasp!". It must have got into the beer without her noticing. Luckily it didn't sting. I had to say "That's about right, another great day had and to cap it this bit of luck at the end. Let's look forward to another tomorrow".