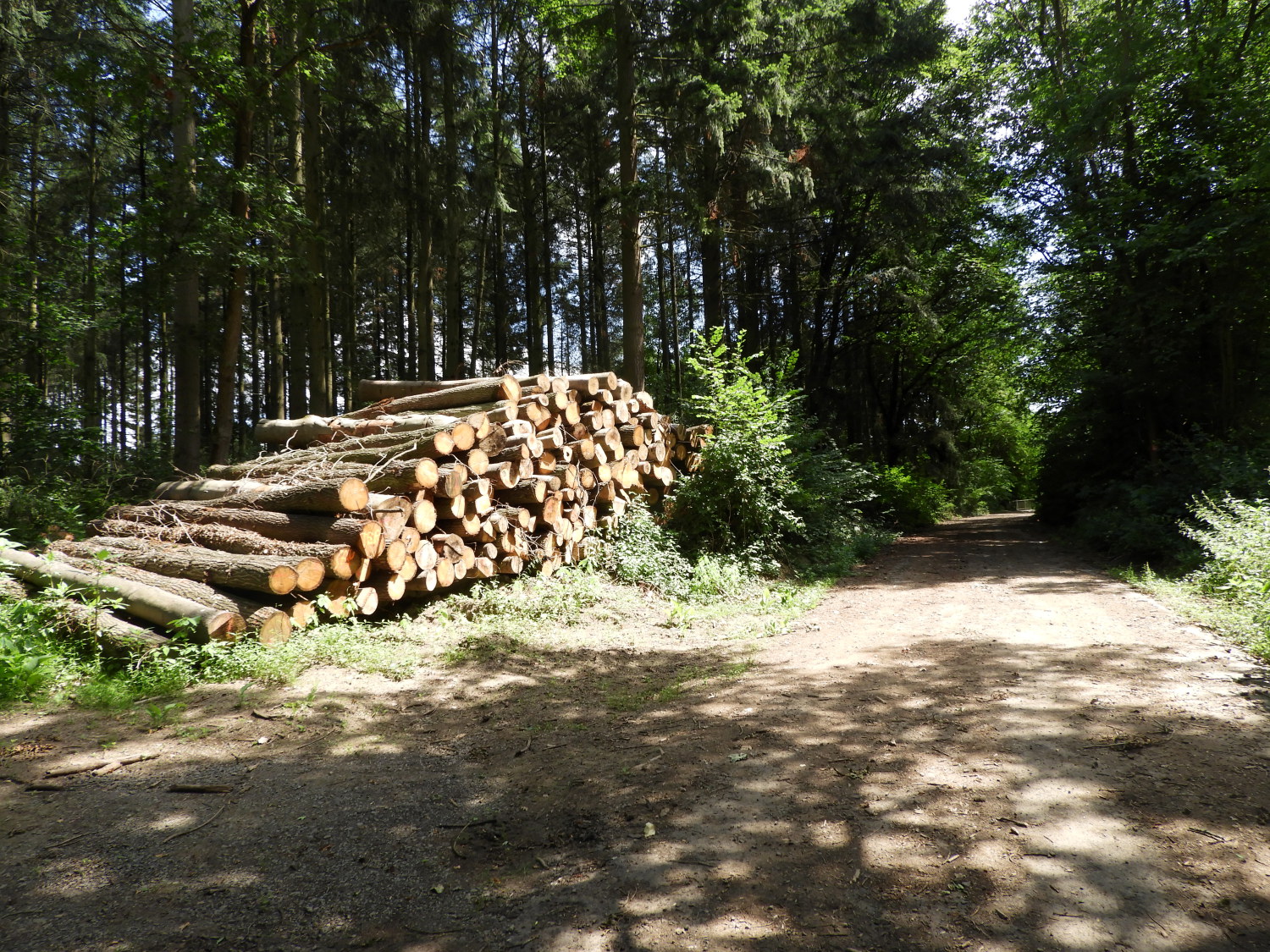 The path from Bassenheim to Wolken 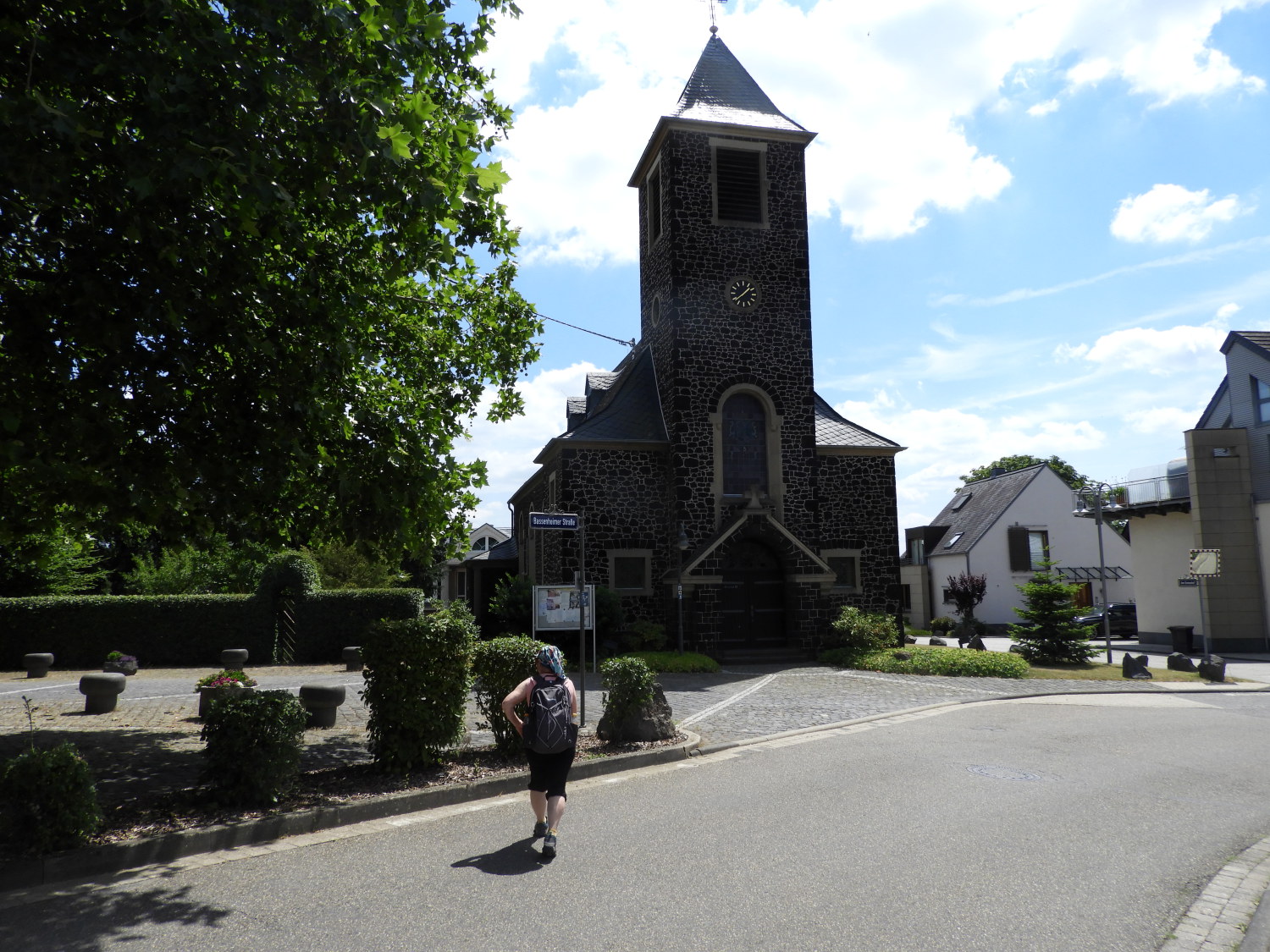 It was five minutes before noon when Lil and I set off from Bassenheim on stage five of our Rhine Castles Trail adventure. Around 20 hours ahead of schedule. Delighted to be on our way on a beautiful day we followed Wolkenweg from the municipality to follow a path through Birkenkopf Wald, in which we sought all the shade that the high trees of the forest could offer us. The temperature was into the mid thirties now, just as the sun was at its highest in the midday sky. Beyond the forest we crossed the A48 road at Eiseme Hand, following Hauptstrase into the village of Wolken. It was very quiet as we walked through the village. Despite it now being around 1.00pm I guess who was about in Wolken was taking cover from the searing heat indoors. We had no option but to keep going but we did make time to enjoy the beautiful older part of the village before heading away to cover ourselves within the deep woods. 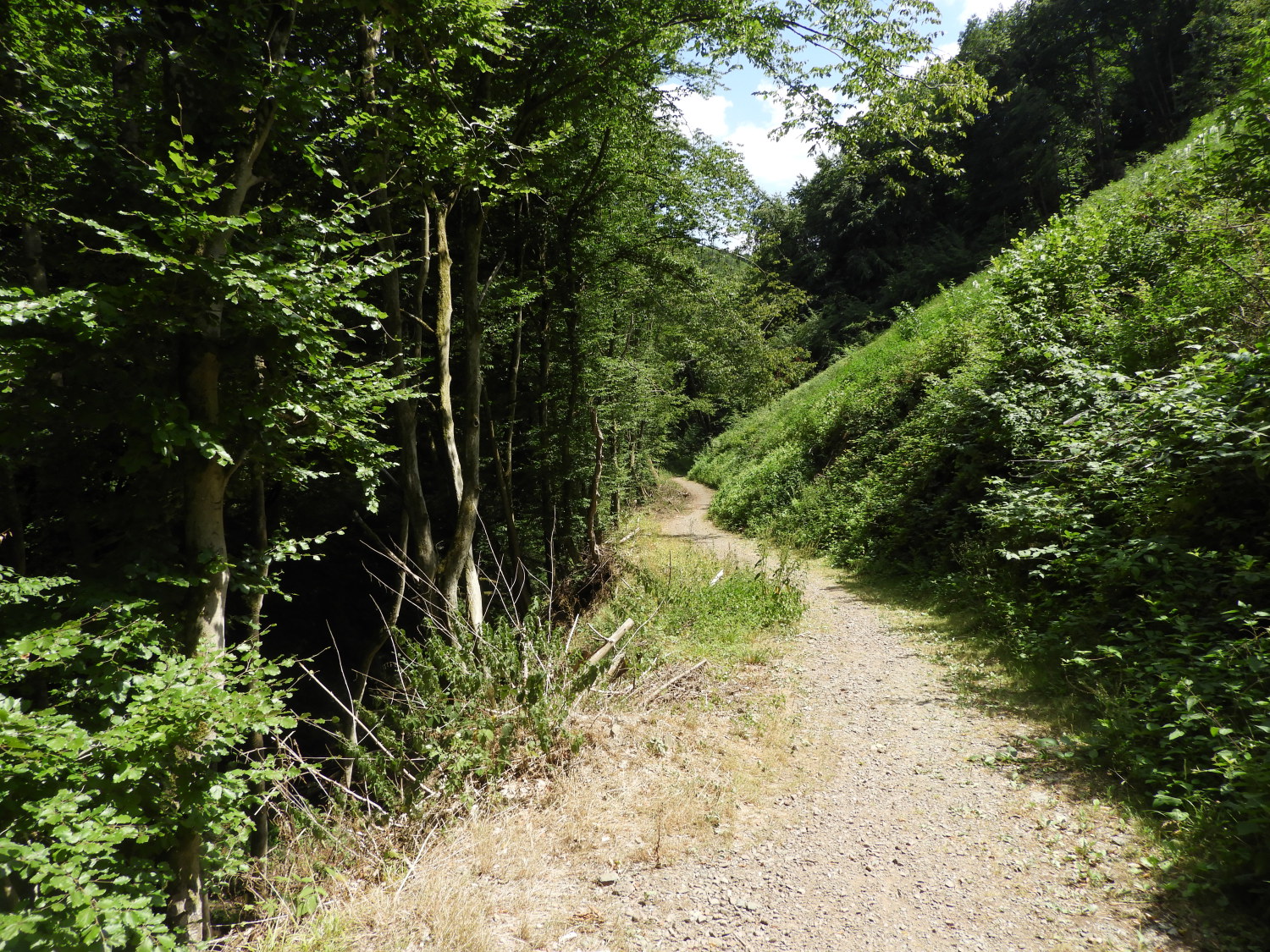 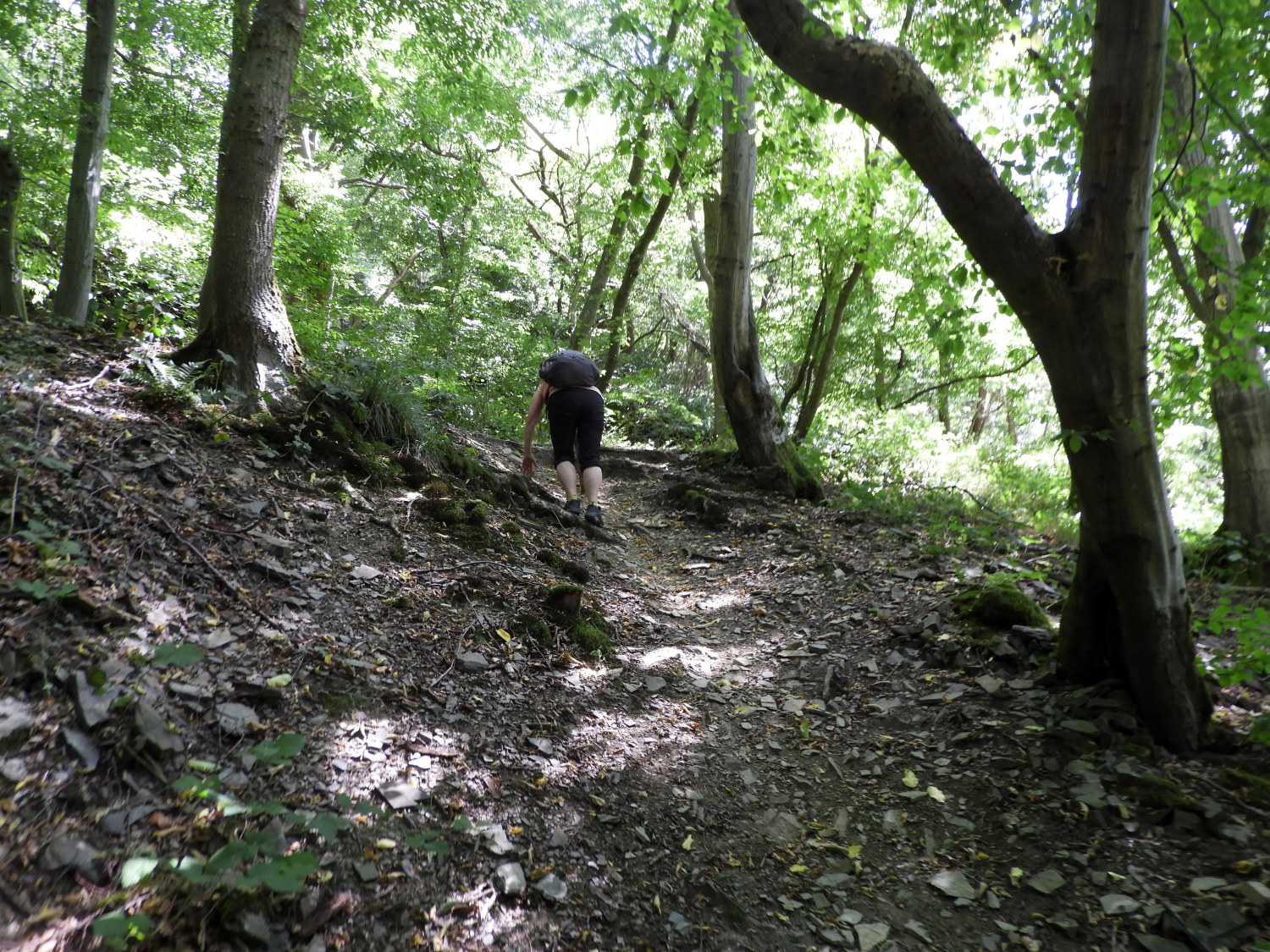 We were just a few steps into the woods when a deer nonchalantly walked from cover onto the path about thirty metres ahead of us, crossing without looking back and disappearing into the cover on the other side before we could reach it. I did not want to startle it anyway. Not that it seemed too bothered. After the deer we continued on a downward course through the woods, keeping on the line of the Wolkener Bach which flowed down from Wolken, joining with some other small watercourses on their shared journey into the Mosel river. We were heading for sight of the Mosel too. Inevitably down leads to up and after a 150 metre descent through the forest to Belltal the path decided it was time to force us back upwards. To gain the height we had lost from Wolken and a little bit more too. About 200 metres climbing in all. It started gently with arching switchback paths but on seeing a steeper shortcut to save 100 metres distance Lil decided it was time to go it tough. Straight up she clambered. Without any hesitation. WOW. Now I was really impressed. 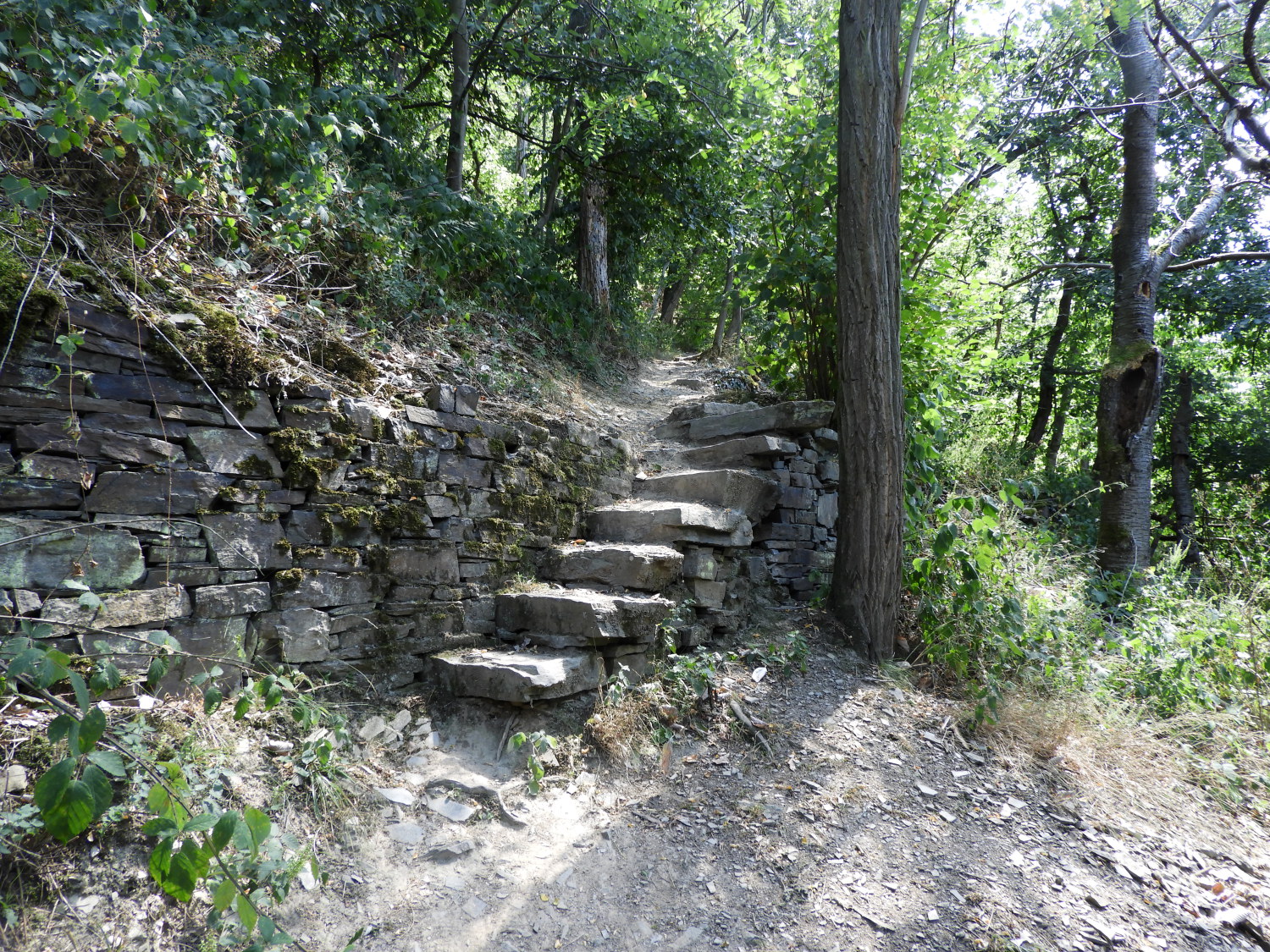 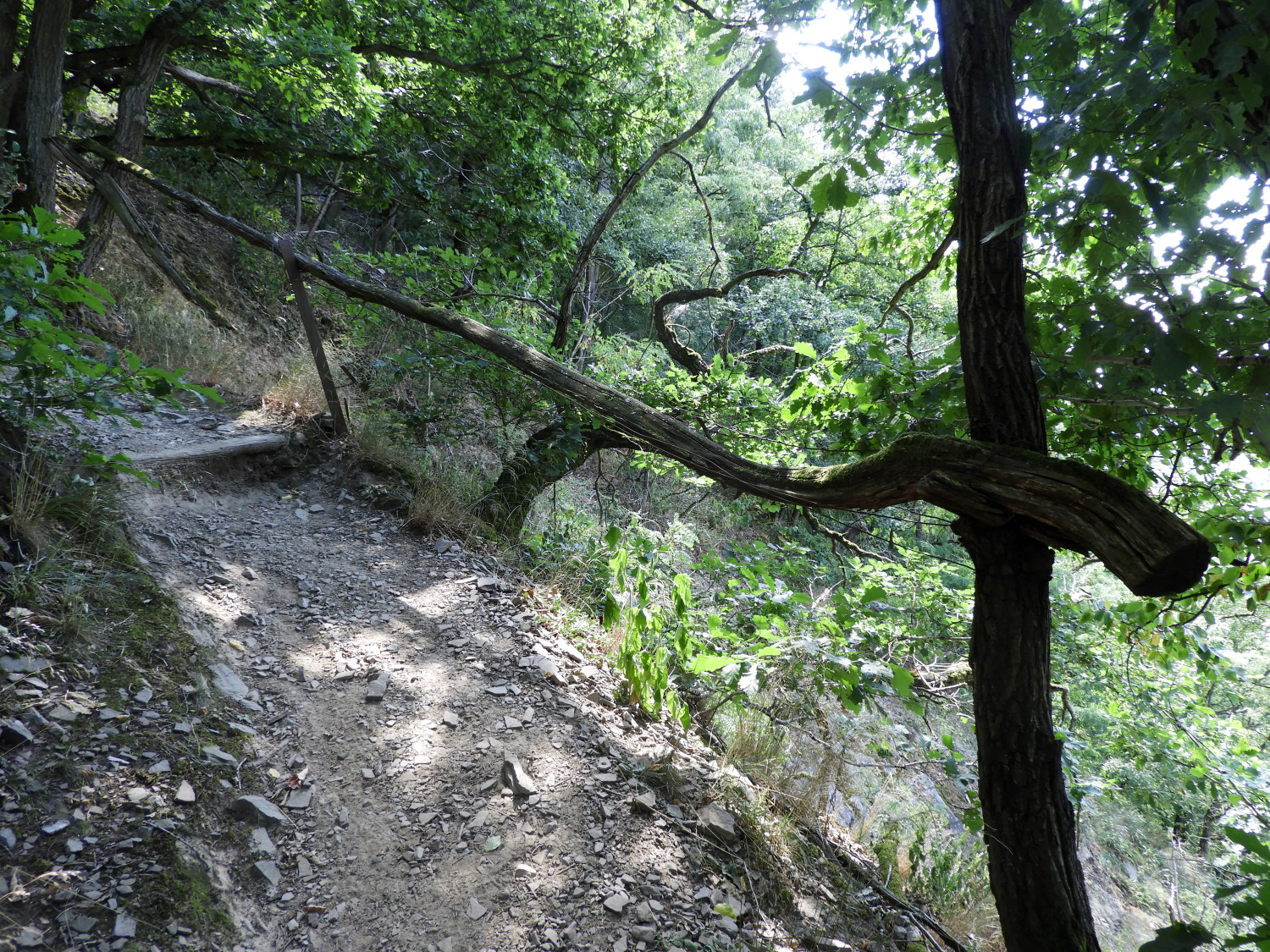 What Lil did not realise was that after the Herculean effort up the shortcut she had twenty to thirty minutes of more steep climbing to reach the top of the Koblenz. From where we would be rewarded with the delight of our first ever view looking down on the Mosel river. When realising she had more strenuous climbing to do, she took a deep breath and soldiered on. "That's my girl" I said with an encouraging smile, leading her on the narrow path upwards. In some places on the climb a slip would have been dangerous, such was the steepness of the slope, that natural wood railings had been constructed along the path. 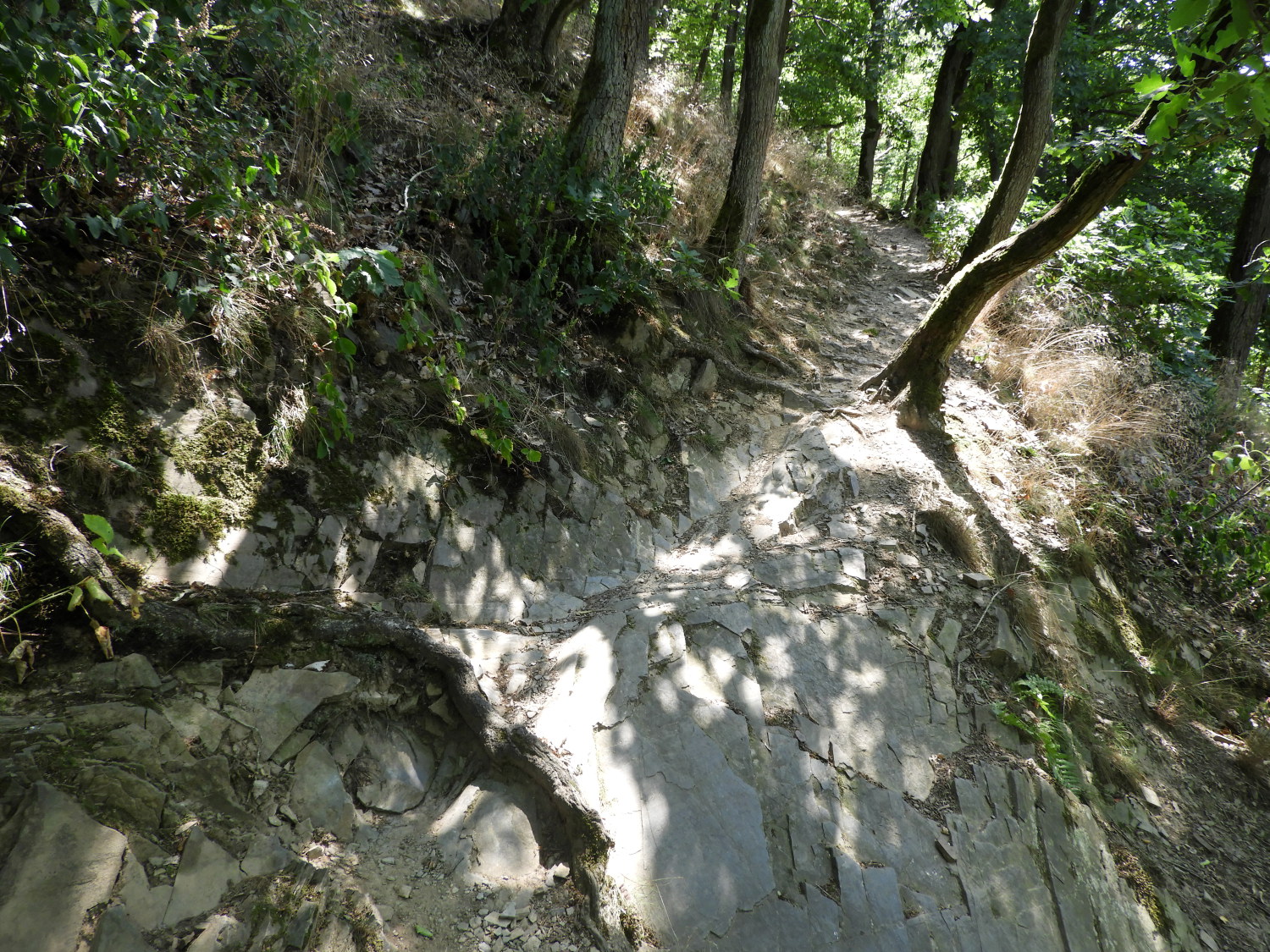 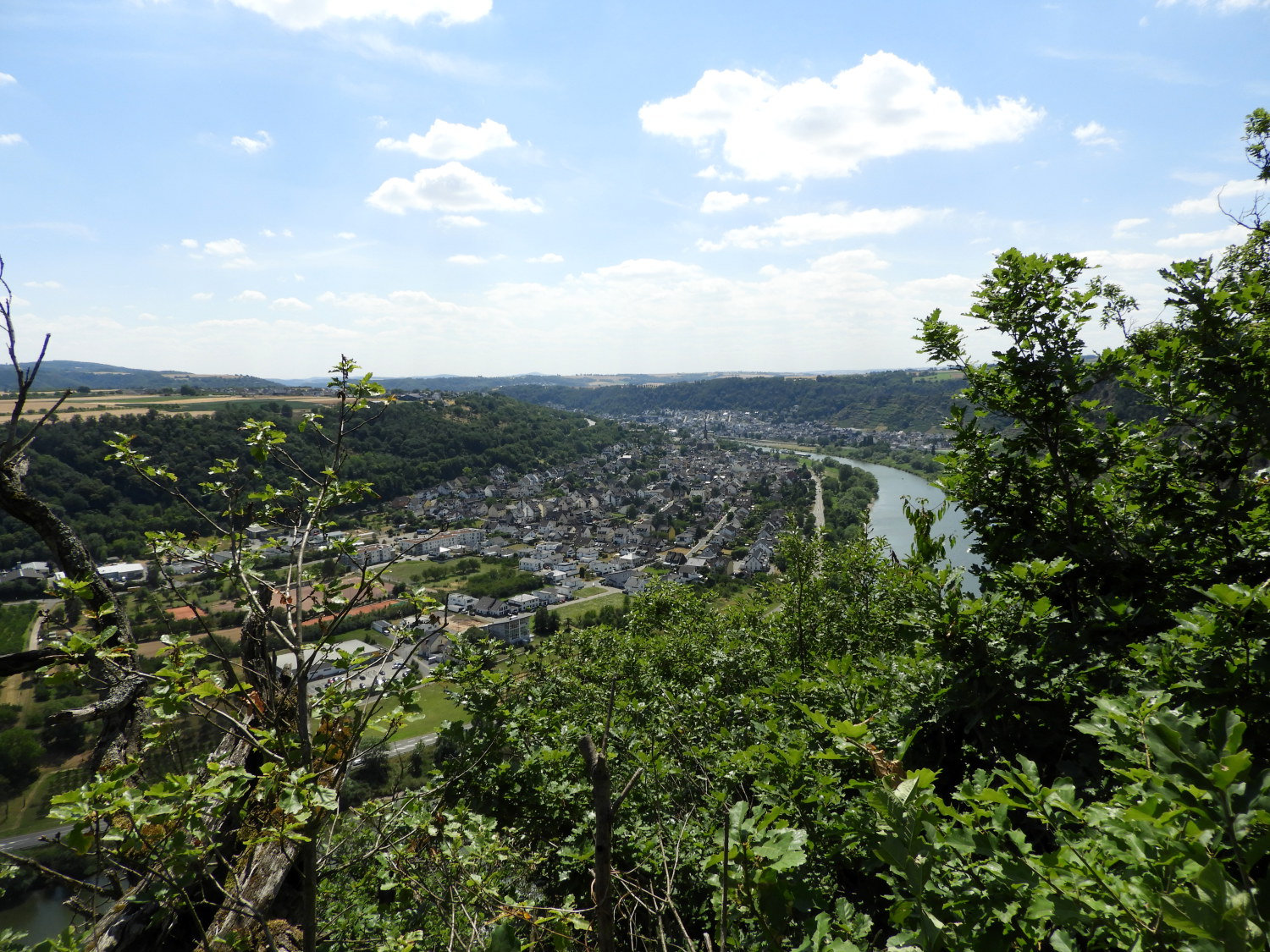 First sight of the Mosel River

In some other places during the steep climb to the Koblenz hill, the path had been cut into the bedrock, no other option available. Here, tree roots clung tightly to the path. Just as we did. The climb was made in the utmost care. On a couple of occasions during the climb we met walkers making a descent of the path. They had the trickier option and were taking as much care as we were. If not more; a headlong fall down the bank from the path would most likely have been injurious. Anyway, with due care, and not a little effort, Lil and I arrived at the top of the path to be rewarded with the most fantastic view of the Mosel river on a curving sweep of the municipality of Dieblech. It was a glorious sight of the river and we would have been satisfied with that. But what we did not yet know was that there was another terrific landscape view over the river further along the path. 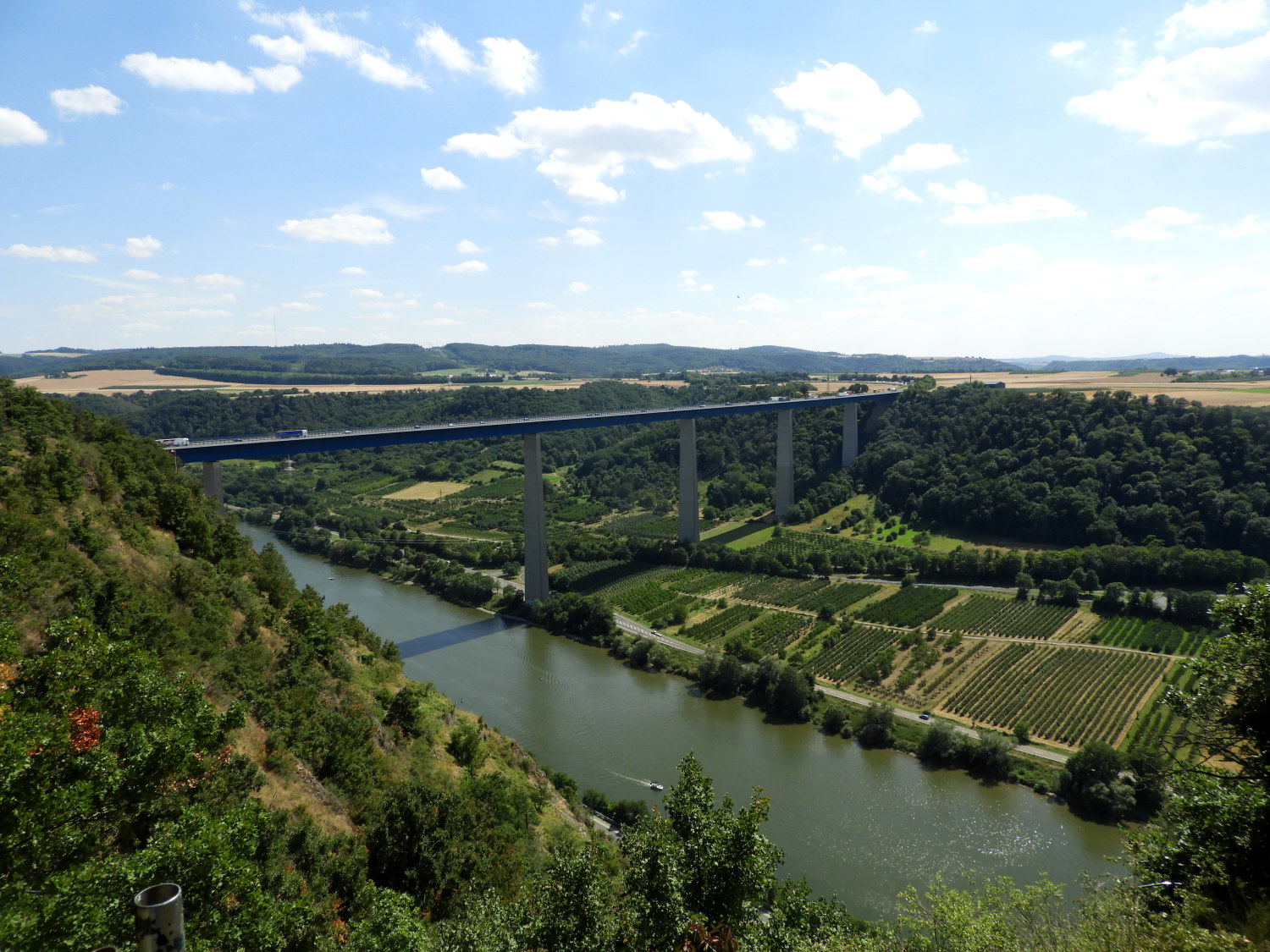 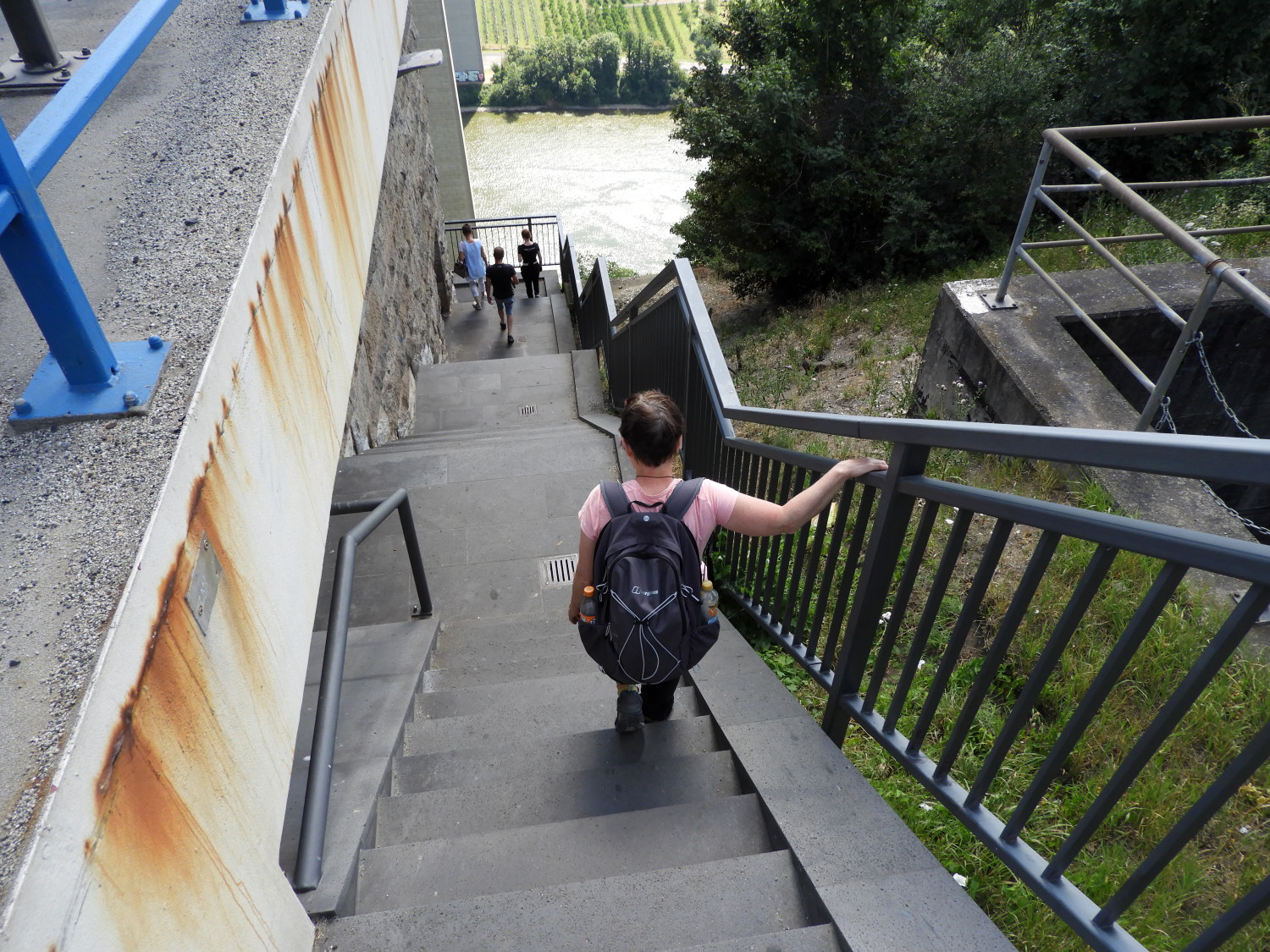 Steps leading under the The Moseltalbrücke

What a double whammy of a reward for the hard effort of climbing to the Koblenz hill ridge above the north bank of the Mosel river. The Moseltalbrücke (Moselle Valley Bridge) was stunning. The bridge is just short of a kilometre long from end to end with a span of over 200 metres between pillars. Directly over the Mosel it stands 136 metres above the river. Halfway along the ridge, which was a lovely tree shielded walk, we came to a hut in a small clearing overlooking the river and with the best view of the bridge available to anyone. And we had it to ourselves, settling down on seats for a ten minute break while looking at the spectacle of little Dinky toy vehicles travelling along the Bundesautobahn 61. After taking our fill of the spectacular sight we moved on to arrive at the bridge where a sightseeing point for the traffic folk could stop and take a look for themselves. At the sightseeing spot was a Serways Raststätte Moseltal Ost (Roadside Service Area Cafe) which allowed us an extra stop off for a hot coffee and snack. If you recall, we were now on our second stage of the Rheinburgenweg today and having already walked around 15 miles with plenty of ascent we really deserved the indulgence. 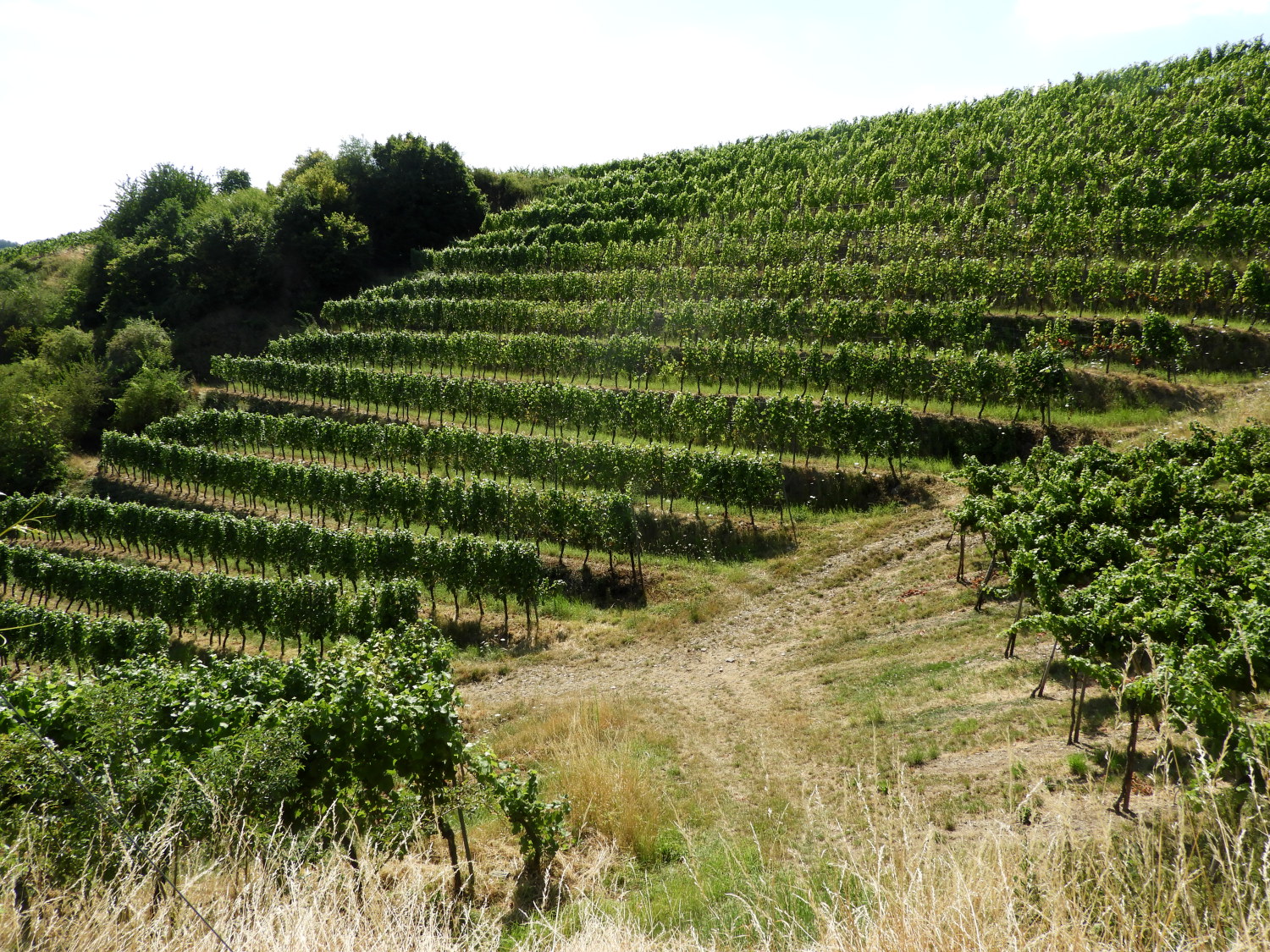 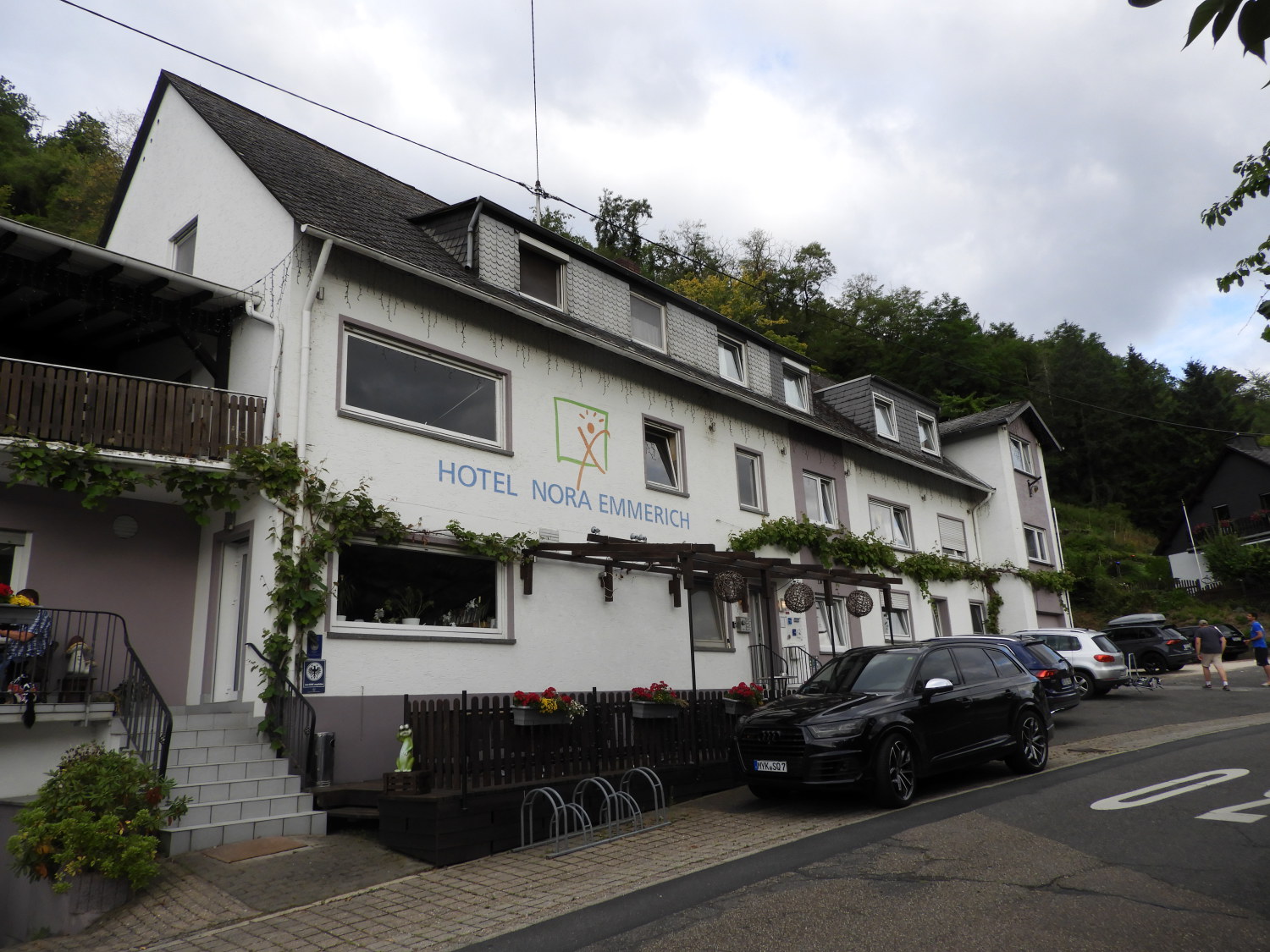 Lil was tired now. But not disheartened. Fortunately our last stretch of the stage from Moseltalbrücke to Winningen was just two miles of gradual downhill walking on good paths through the first of Winningen Grape Fields we would pass through. Not just on the conclusion of today's stage but all the way from here to the city of Koblenz. We ambled along the descent, all the while taking in the lovely view of the Mosel valley and the municipality of Winningen where our hotel was waiting for us. We noted the far side of the river was banked with woodland and forest but on this side there was nothing but grapevine. A retaining wall in the vine fields was written with 'Winninger Domgarten'. Home of the Winninger Domgarten Riesling Hochgewächs Trocken, a crisp white wine. We were not thinking wine though as we trudged into Winningen and found our hotel. More like a shower, rest and chill out before heading into the centre of Winningen for a Friday night out. Which we did, wheat beer for me, wine for Lil and Schnitzel for both of us. We had earned it, having completed two stages in one day. And now we were just a short one stage distance from the city of Koblenz where we had promised ourselves a one day Wedding anniversary break from the walk. Over dinner I asked Lil "Why not walk in to Koblenz tomorrow and make it two free days there". "Why not" said she.