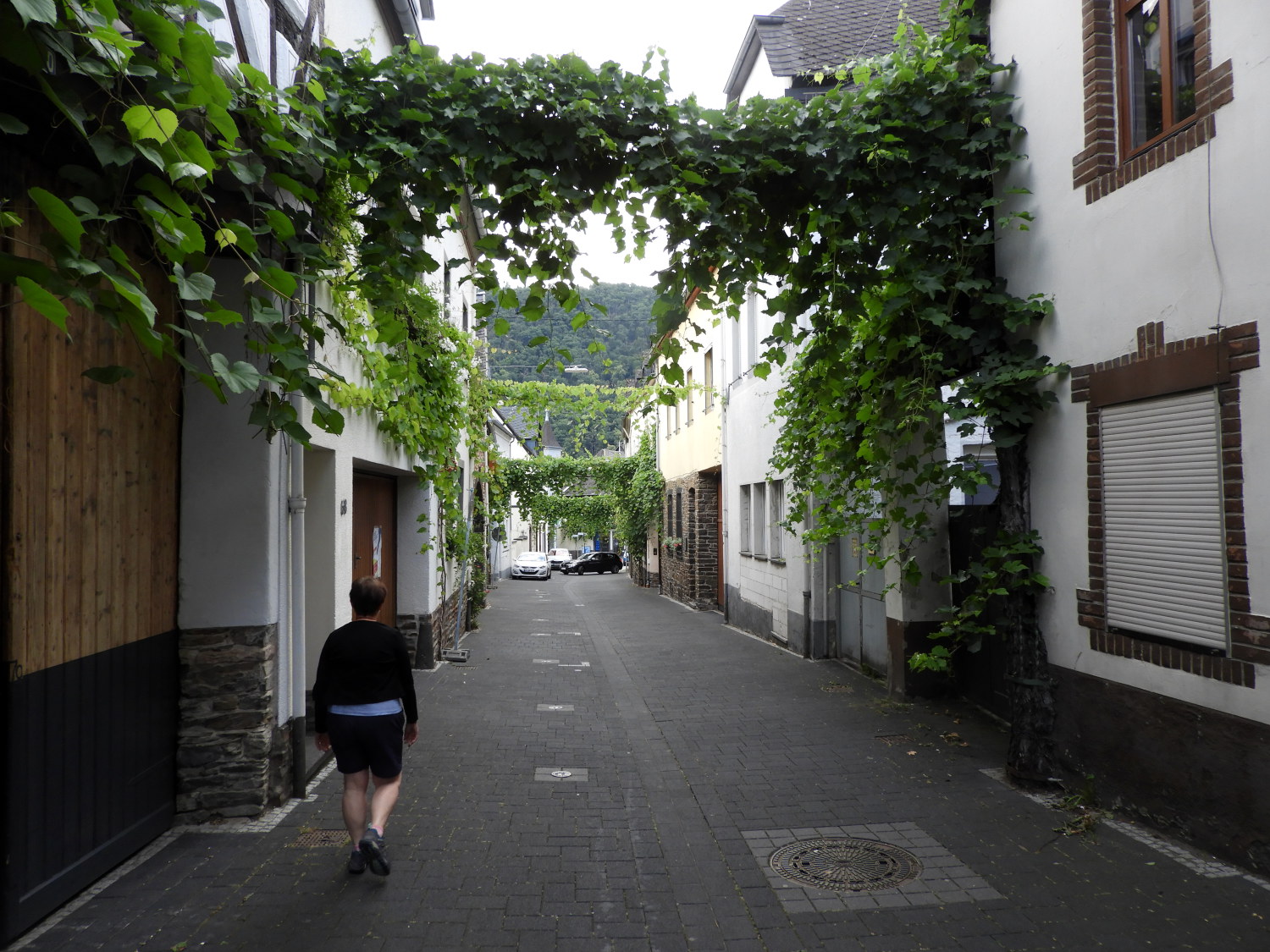 Heading off through Winningen towards Koblenz 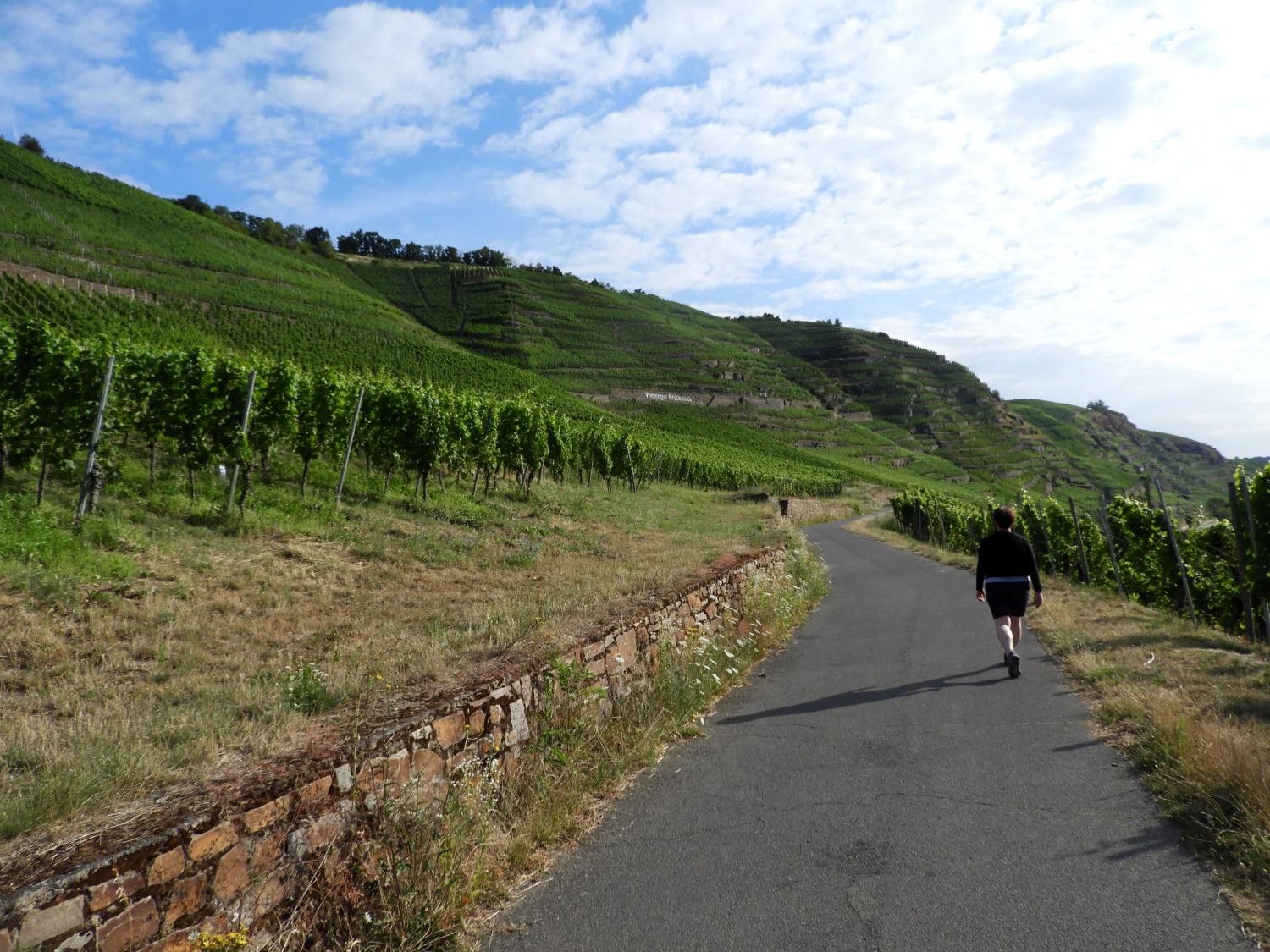 Beside the huge grape fields

We were in good spirits when we left our hotel in Winningen to walk the relatively short nine mile stage into Koblenz. It was around 7.30 am on a Saturday morning as we ambled down the road into Winningen with our target being the spot where the Mosel flows into the Rhine. Not part of the Rheinburgenweg route as shown on the map and download files which stick to the official route but our chosen alternative as a break in the city of Koblenz around the halfway point of the walk was always the plan. It was our wedding anniversary weekend and I had promised Lil a day seeing the sights of the pretty Rhineland city as part of the package in persuading her to do this, her first, long distance walk. Thanks to her brilliant efforts so far we were a day ahead of schedule so we could now have two days off in Koblenz. We looked forward to that but first we had to get there. We ambled from Winningen to follow the road by the river with the endless line of Winningen vine fields rising up to our left. 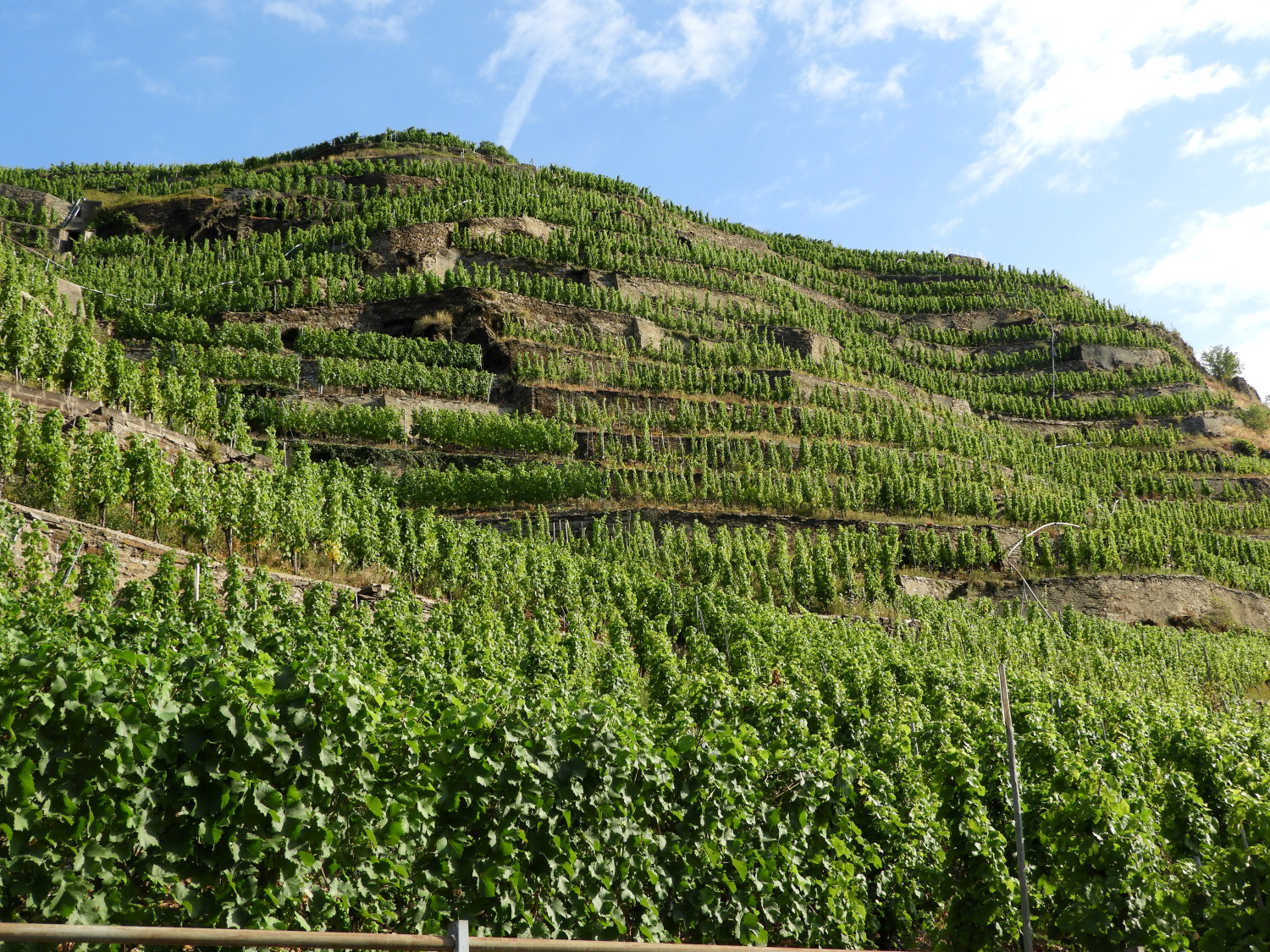 Vines fill the slopes of the Mosel valley 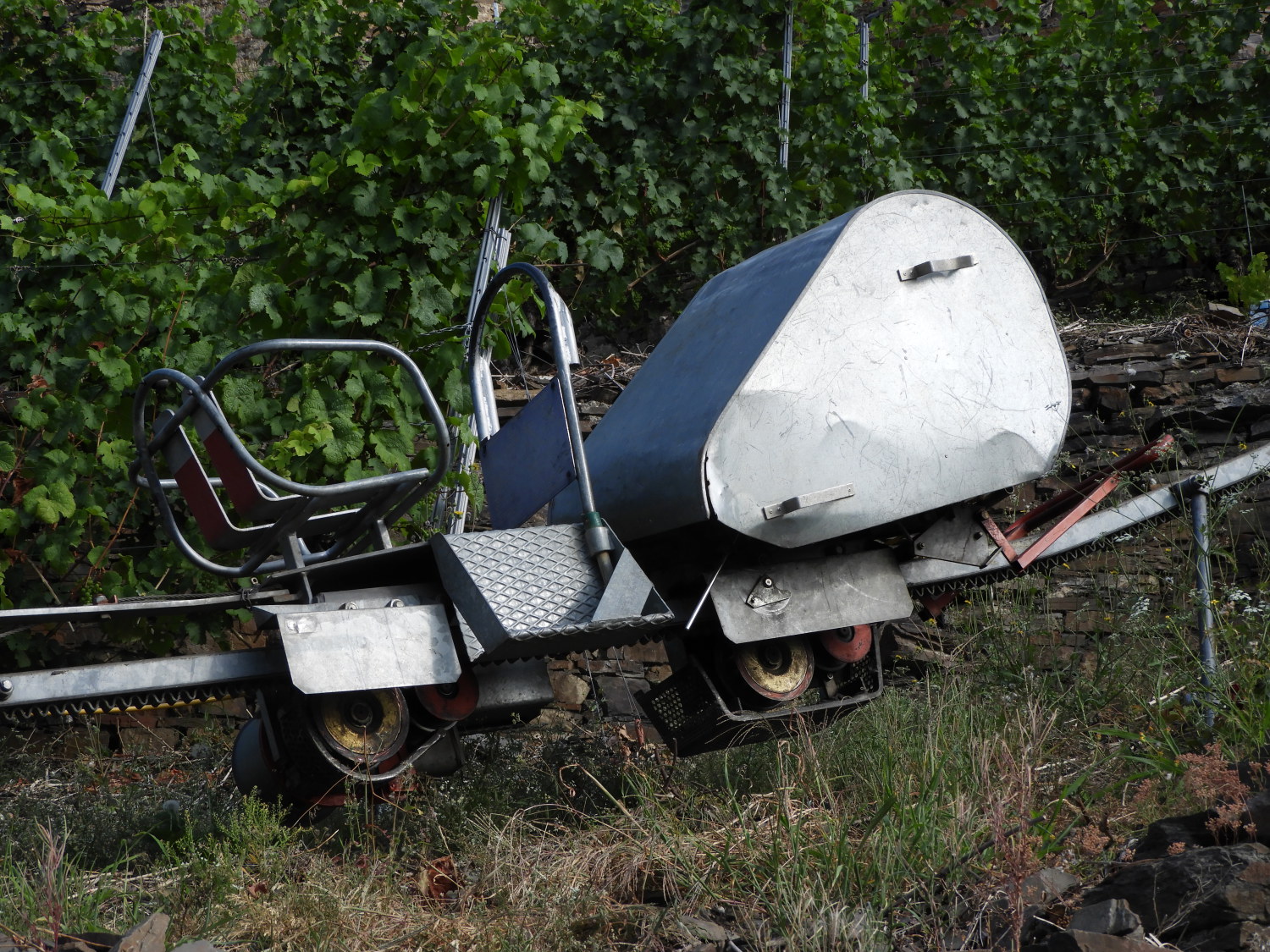 It was hot from the start today with the sun coming out from early morning cloud before 7.30am. And it was going to get hotter, a severe spike in the Europe wide heatwaves of 2022 forecast for the next three days. We knew it was going to be hot. But this hot? Back home in Harrogate the temperatures would rise above 40 degrees celcius during the weekend and here it was already stifling as we slowly walked along the vine fields road. Part way along we stopped to look at a kind of tracked bogey which took grape workers up and down the slopes of the vineyards. It looked a precarious track. "You would not get me going up that hill in one of them" I said. Lil agreed. 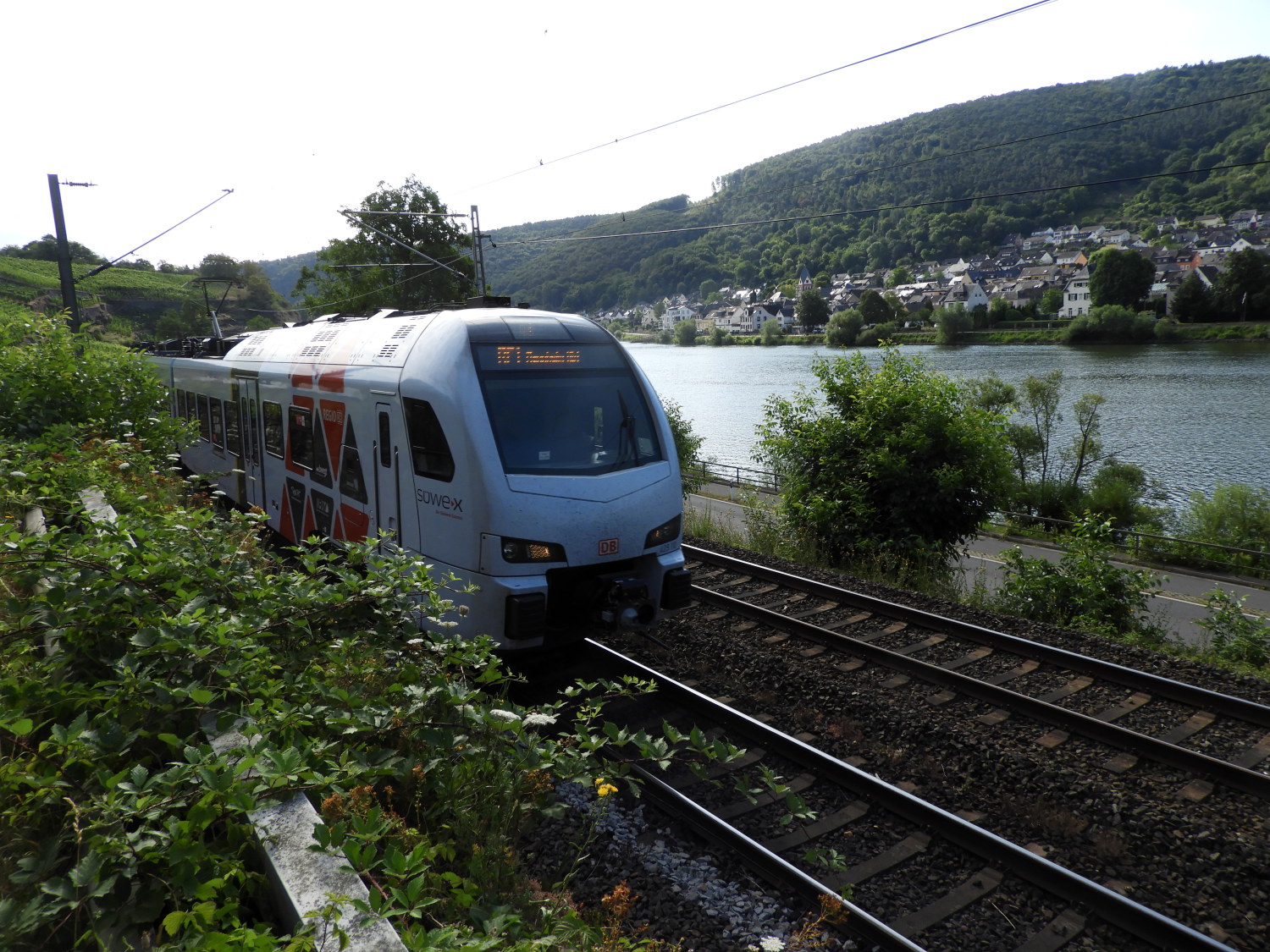 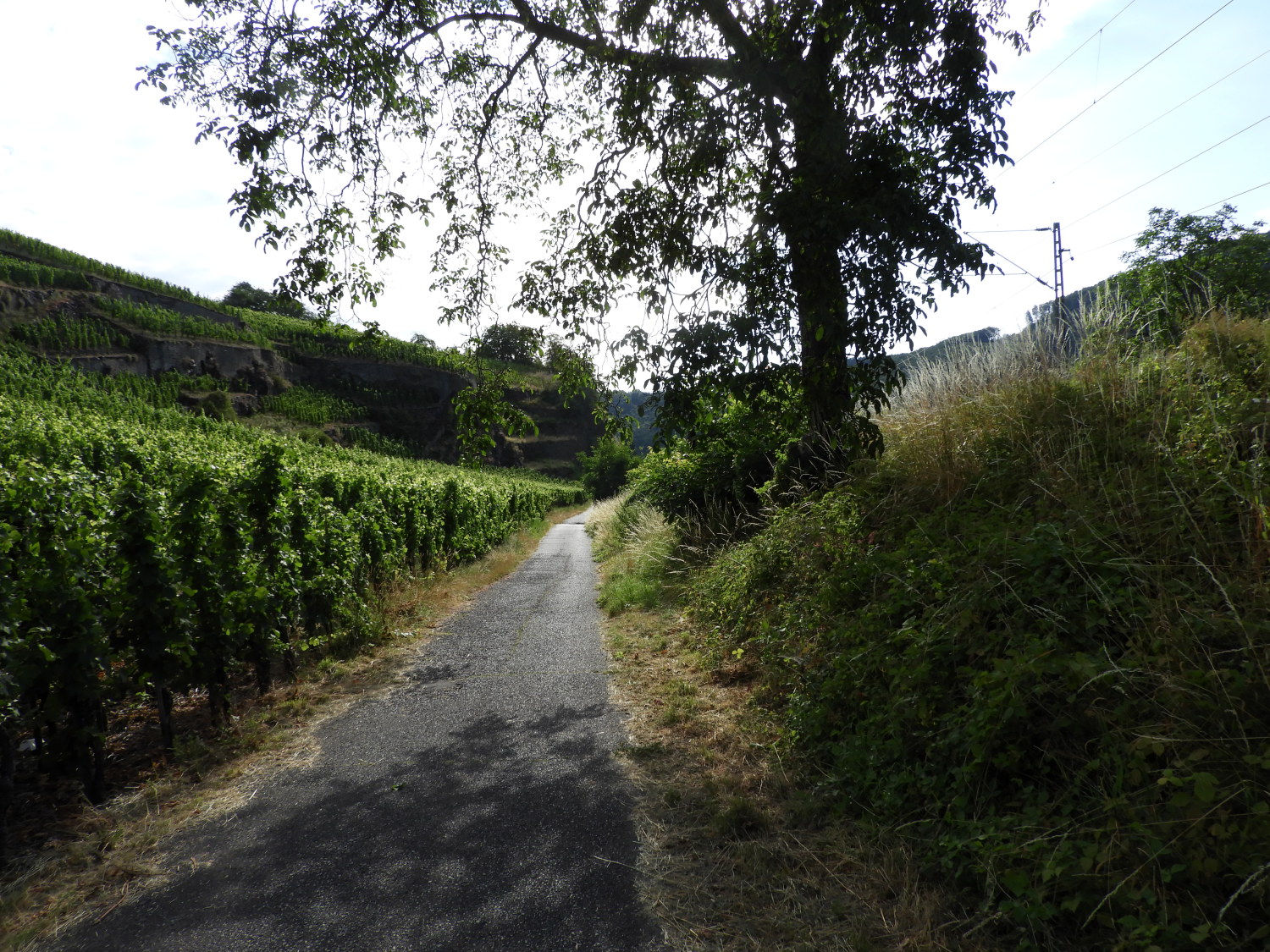 There was no traffic on the service road. Bar one Deutz-Fahr tractor which was trundling along with three workers jumping on and off to inspect the vines and infrastructure required to tend them. We hoped one of the workforce would give us a real time demonstration of chugging up the hill on the bogey. Alas the show did not happen. On we went, making way further on towards Koblenz. On the railway line to our right a goods train passed, five minutes later followed by a 'sehr schnell Zug' - very fast train. Sorry, showing off a little of my German learning there. 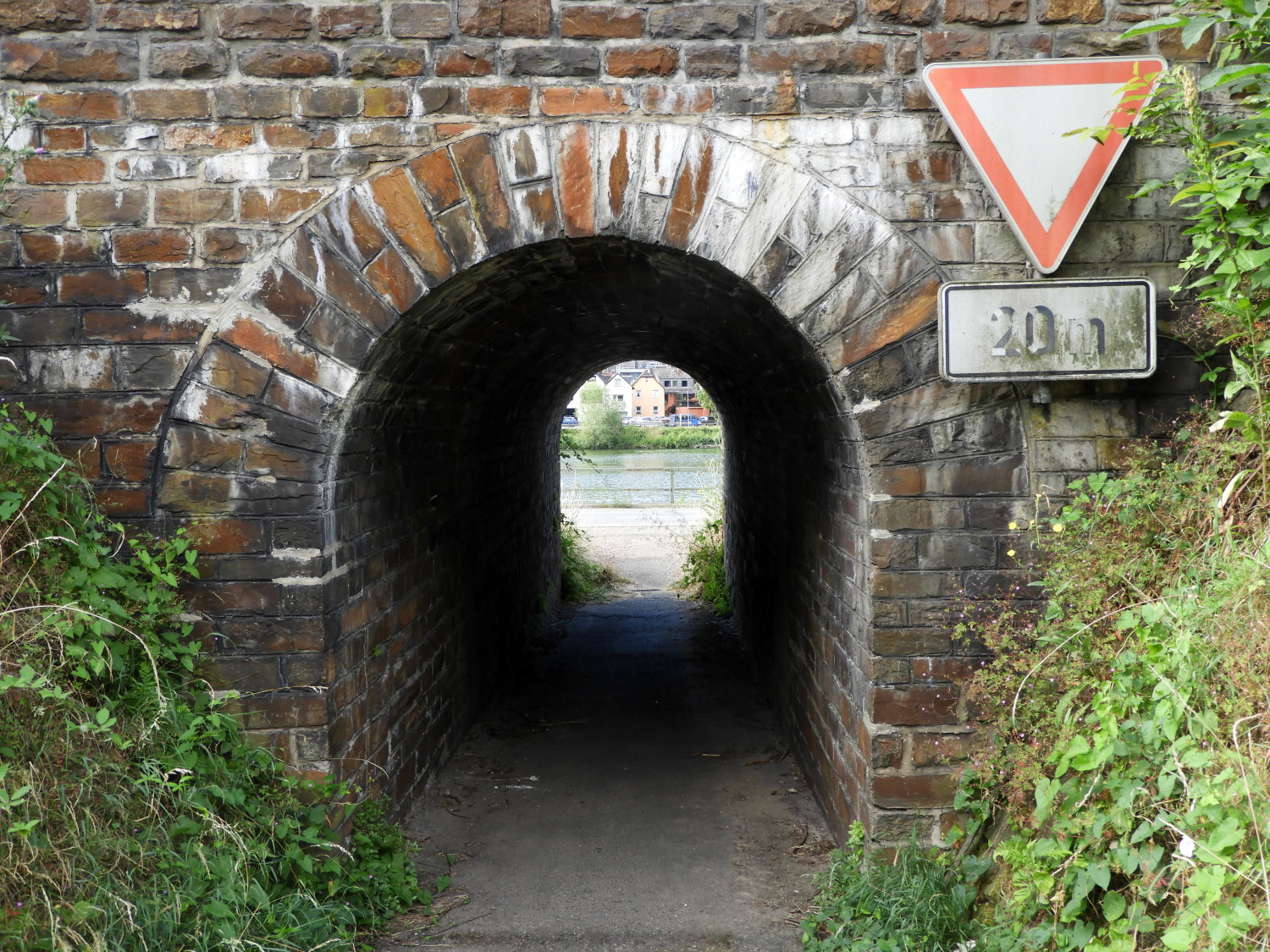 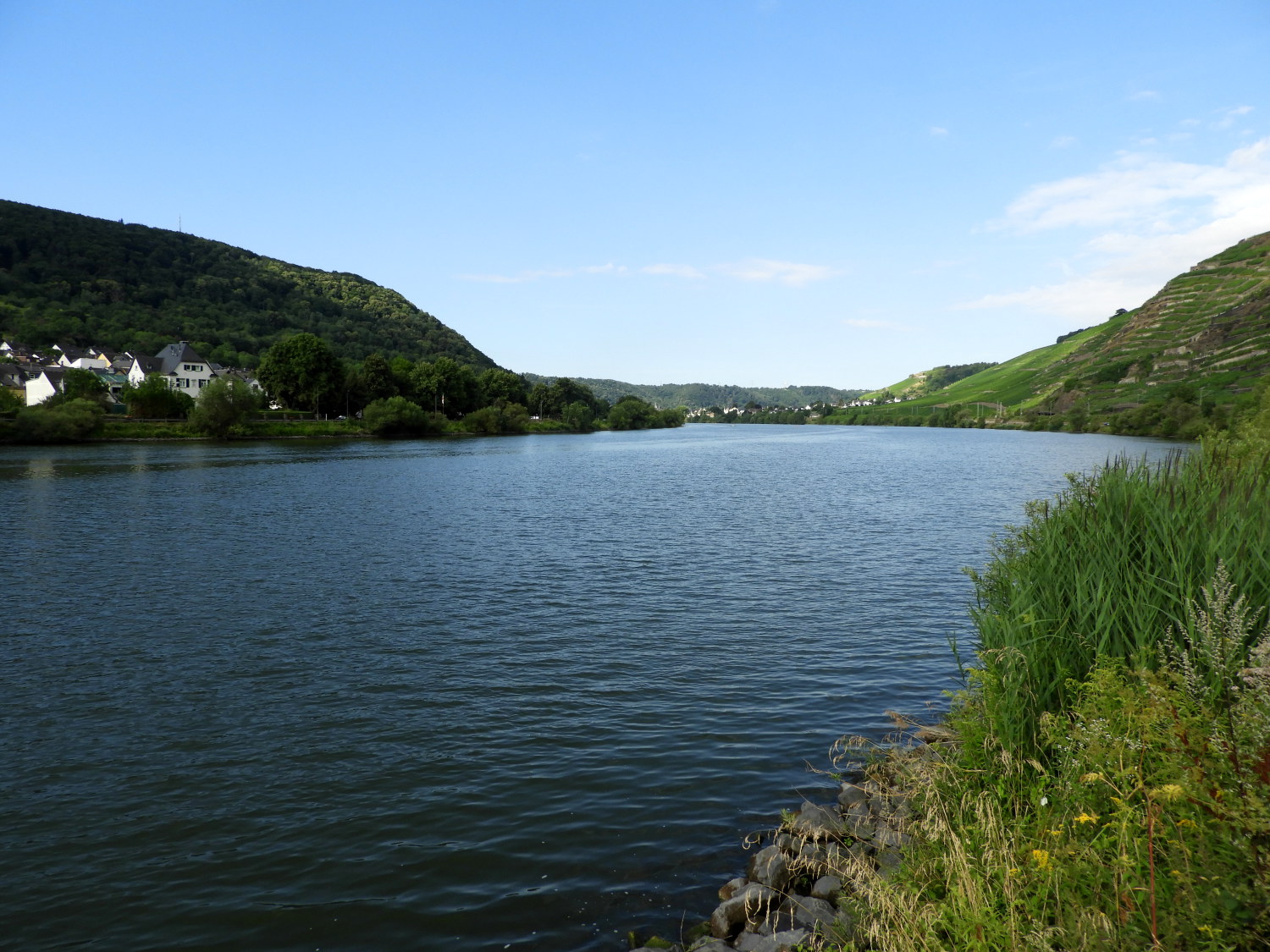 For most of the way between Winningen and the Koblenz suburb of Langendorf we had to focus on the banks of vines rising to our left. For on our right was a retaining wall of the Mosel valley railway line which kept us from seeing the river. Eventually though we arrived at a tunnel under the railway line which I stepped through to view the Mosel and on its far bank the municipality of Lay. Also, on the river itself were some rowing crews on Saturday morning exercises. They will probably have sculled upstream from Koblenz before turning somewhere near and sculling the easier downstream course back into the city. Apart from the rowers the river was calm and serenely peaceful, especially upstream looking back towards Winningen. 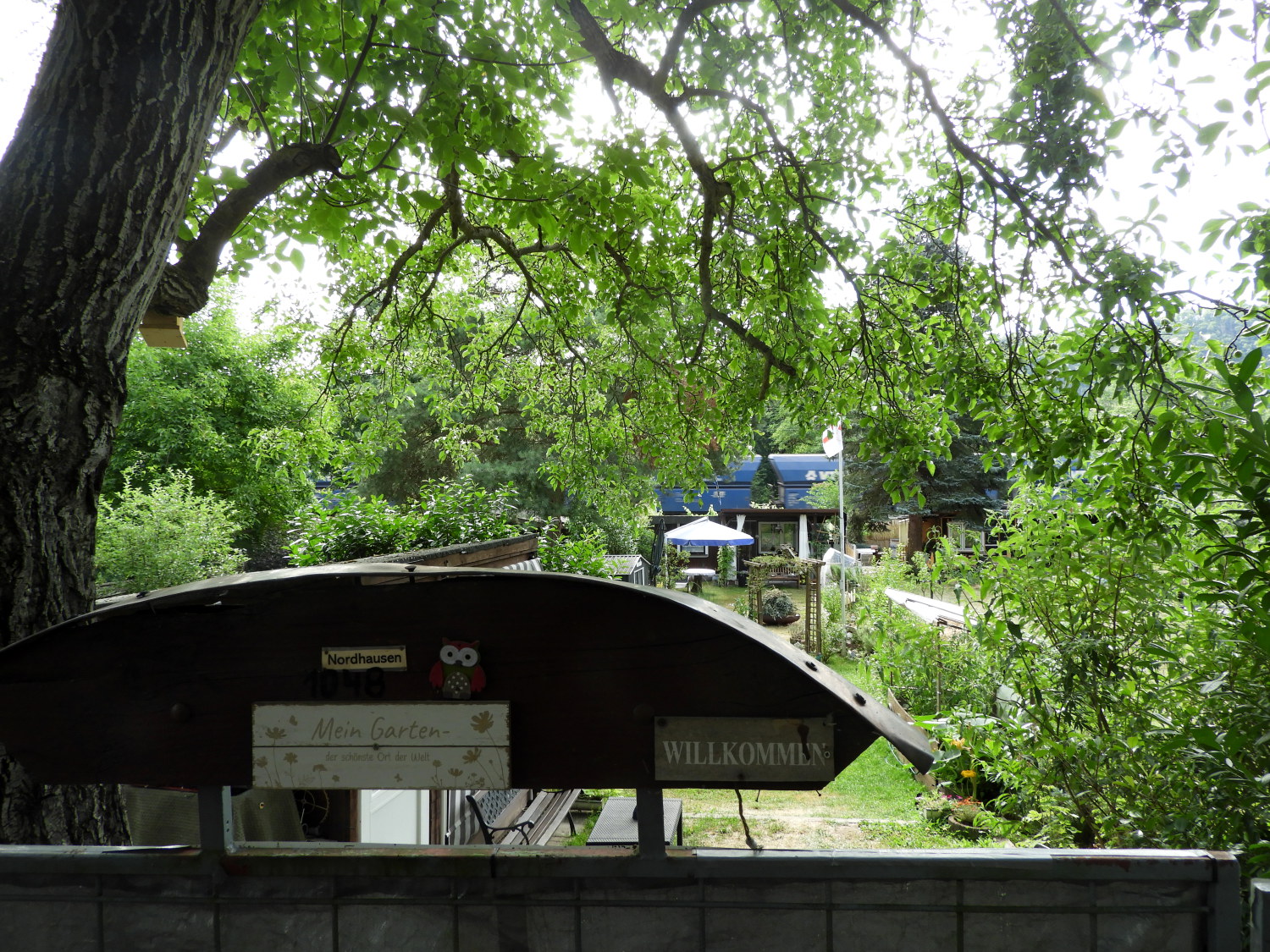 The luxurious gardens of Langendorf 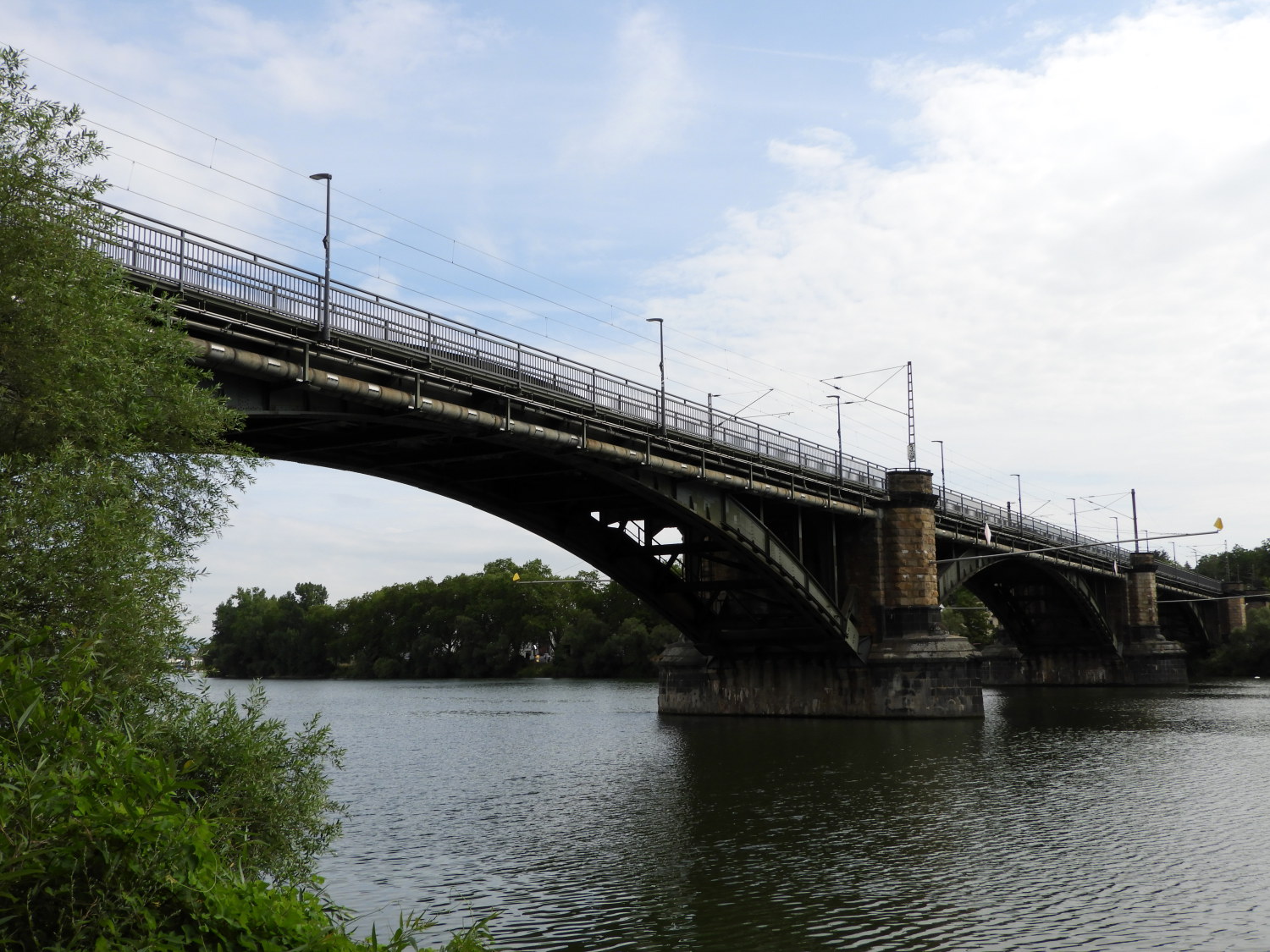 After just one hour of walking we arrived in the first environs of Koblenz. The vine fields and high banks on the side of the Mosel had suddenly given way to in-fields and these in turn to large private fenced gardens. I have termed them 'The luxurious gardens of Langendorf ' as all were securely locked from intrusive access. Many had large summer huts, barbecue areas, elaborate garden buildings and more. Several were flying flags. Most had signs such as 'Mein Garten - der schonste Ort der Welt' (My Garden - the most beautiful place in the world). Perhaps these were the equivalent of British second homes by the seaside and in the countryside. A place to get away from it all. Anyway, these interesting distractions led us into Koblenz itself. Before we knew it we were walking along the Moselhoheweg/ Rheinburgenweg riverside path, adjacent to Moselweinstrase, heading directly to the Gülser Eisenbahnbrücke (Güls railway bridge), our access crossing into the city. Before crossing the river we took a coffee break at the Anker Grill roadside cafe, anticipating the sights which lie ahead. 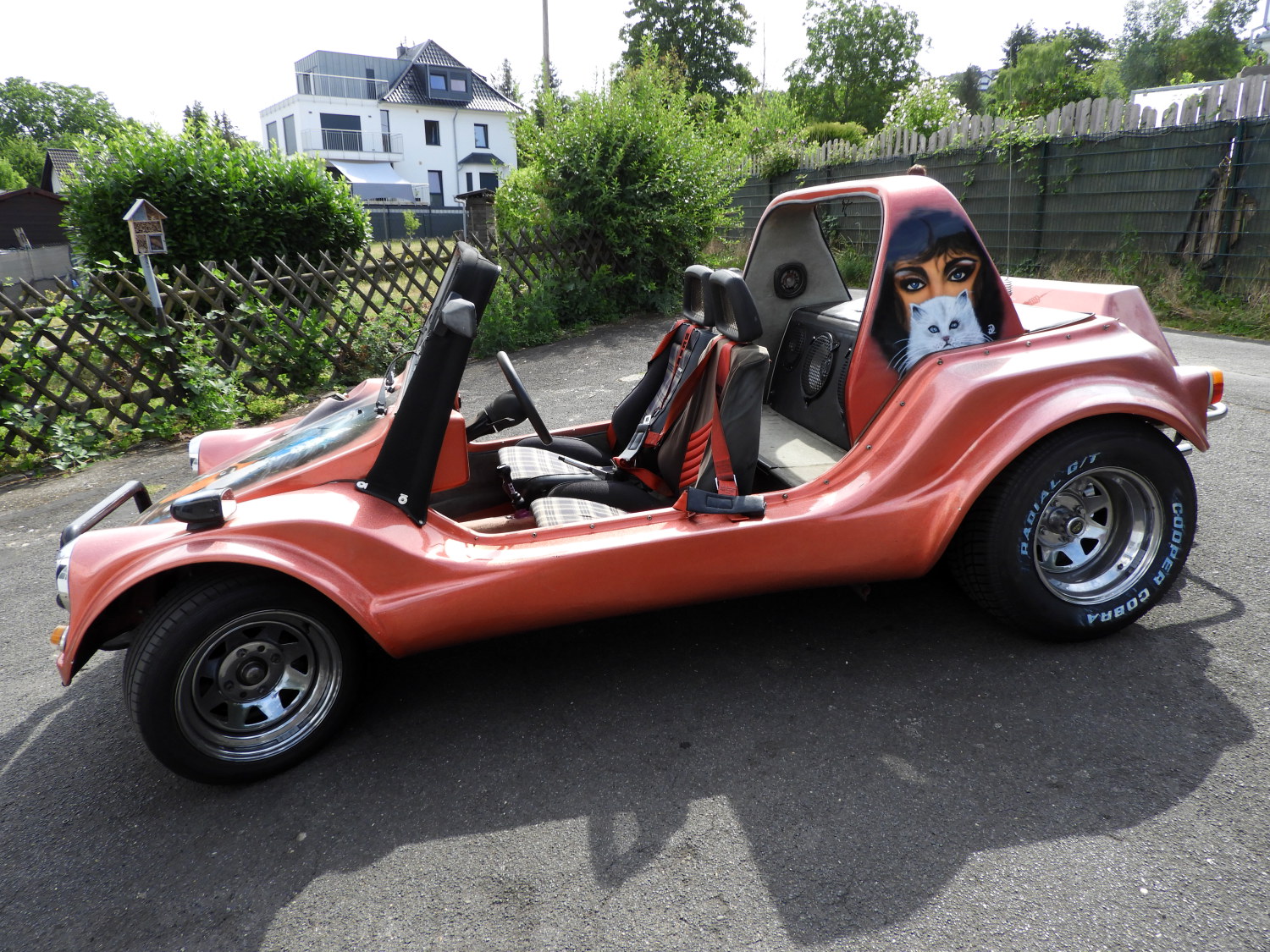 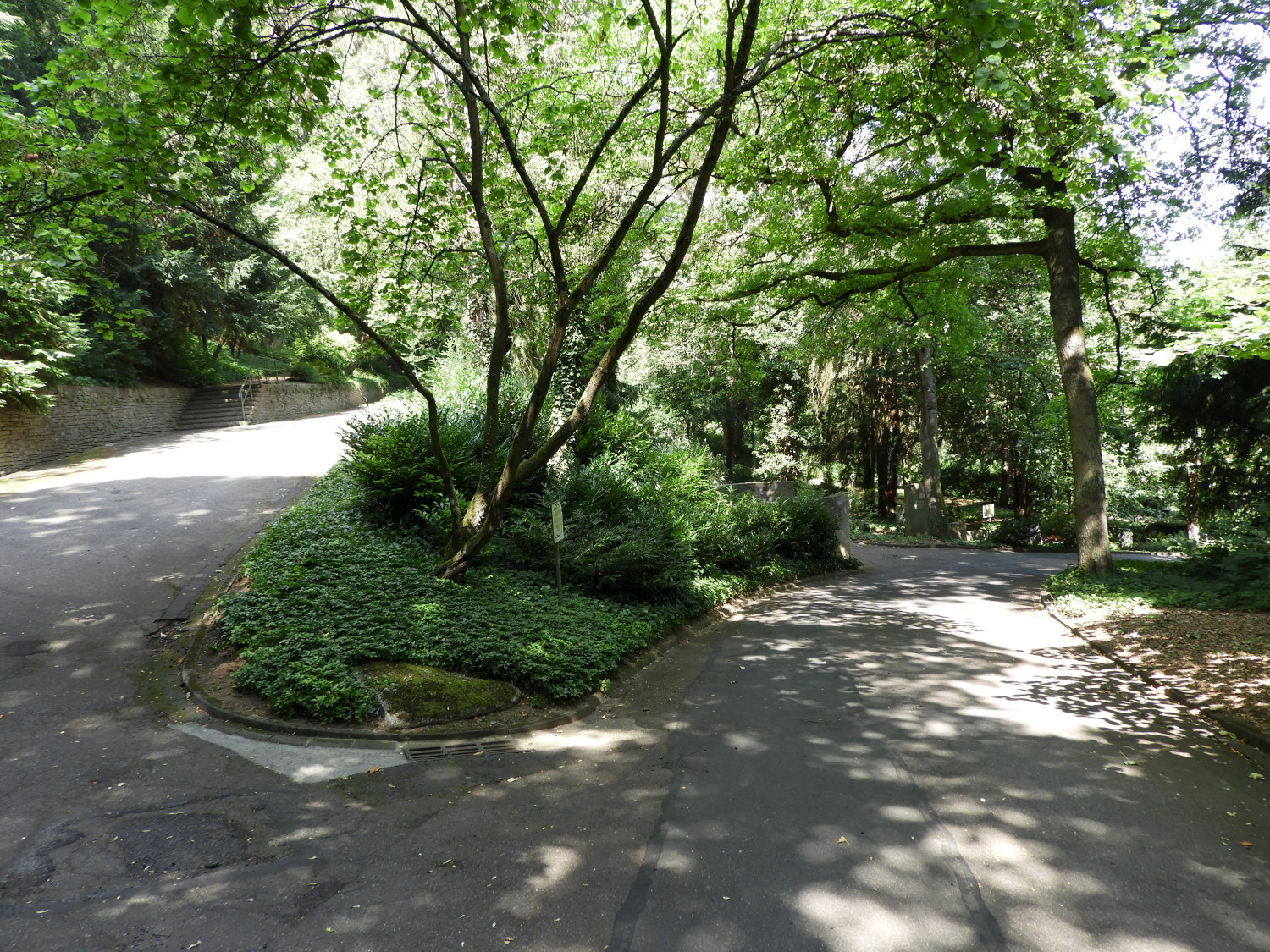 By way of a footway, over the bridge we went, following a path past some more gardens to arrive at Hauptfriedhof Koblenz, the main cemetery of the city. Not only a resting place, the Hauptfriedhof is also a landscape garden. This green haven, full of peace and tranquility was the much better choice that following city streets. Its beautiful paths took us halfway into the city. At its city side eastern end, the Hauptfriedhof has a walled garden dedicated to the 'Dengefallenender der stadh koblenz und ihrir garnison zum gedachtnis 1914-1918' (To commemorate the fallen of the City of Koblenz and their garrison 1914-1918). It was quite, poignant and moving to stand in the garden. We have to remember all sides suffered. Continuing the walk.... 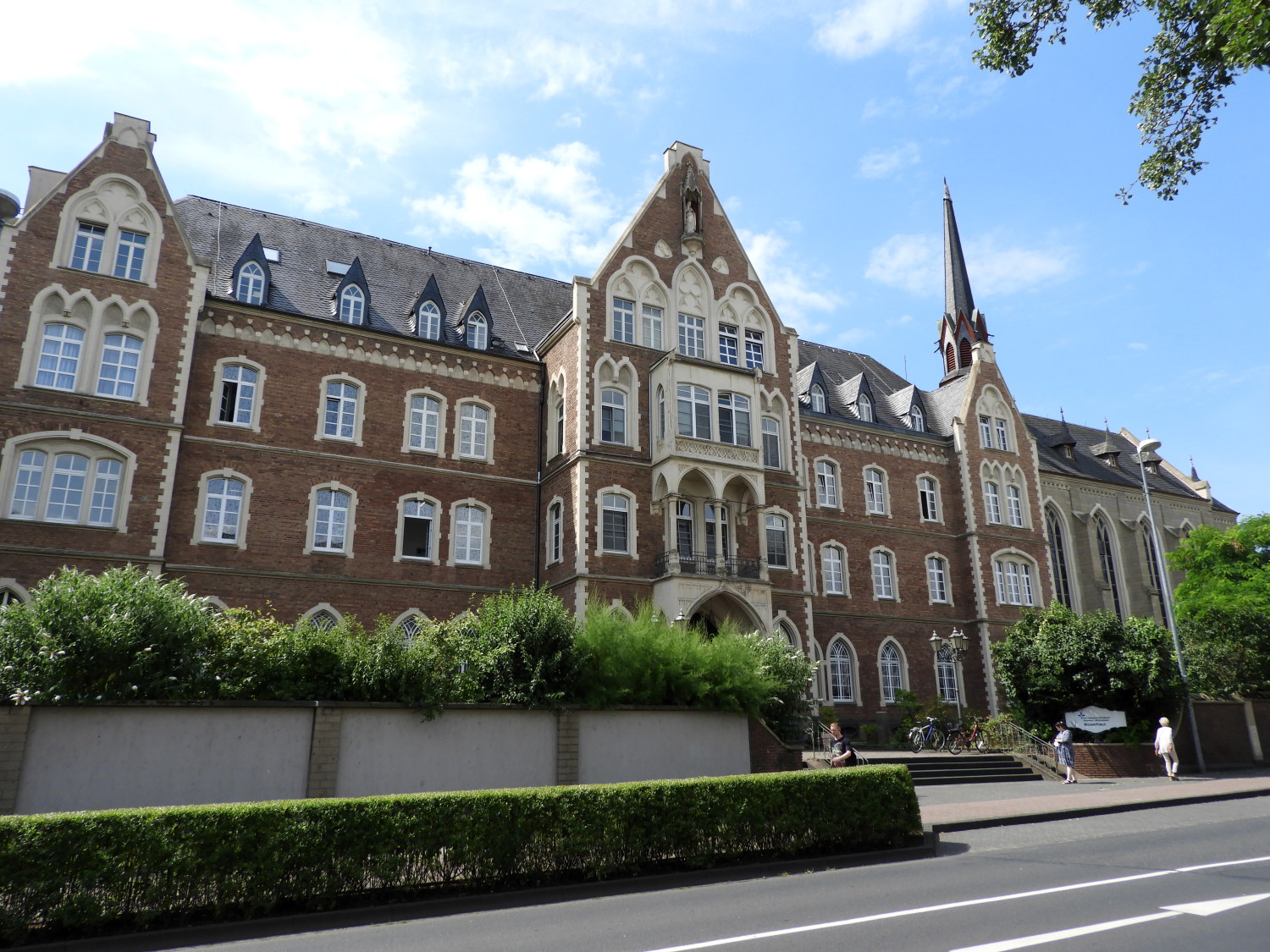 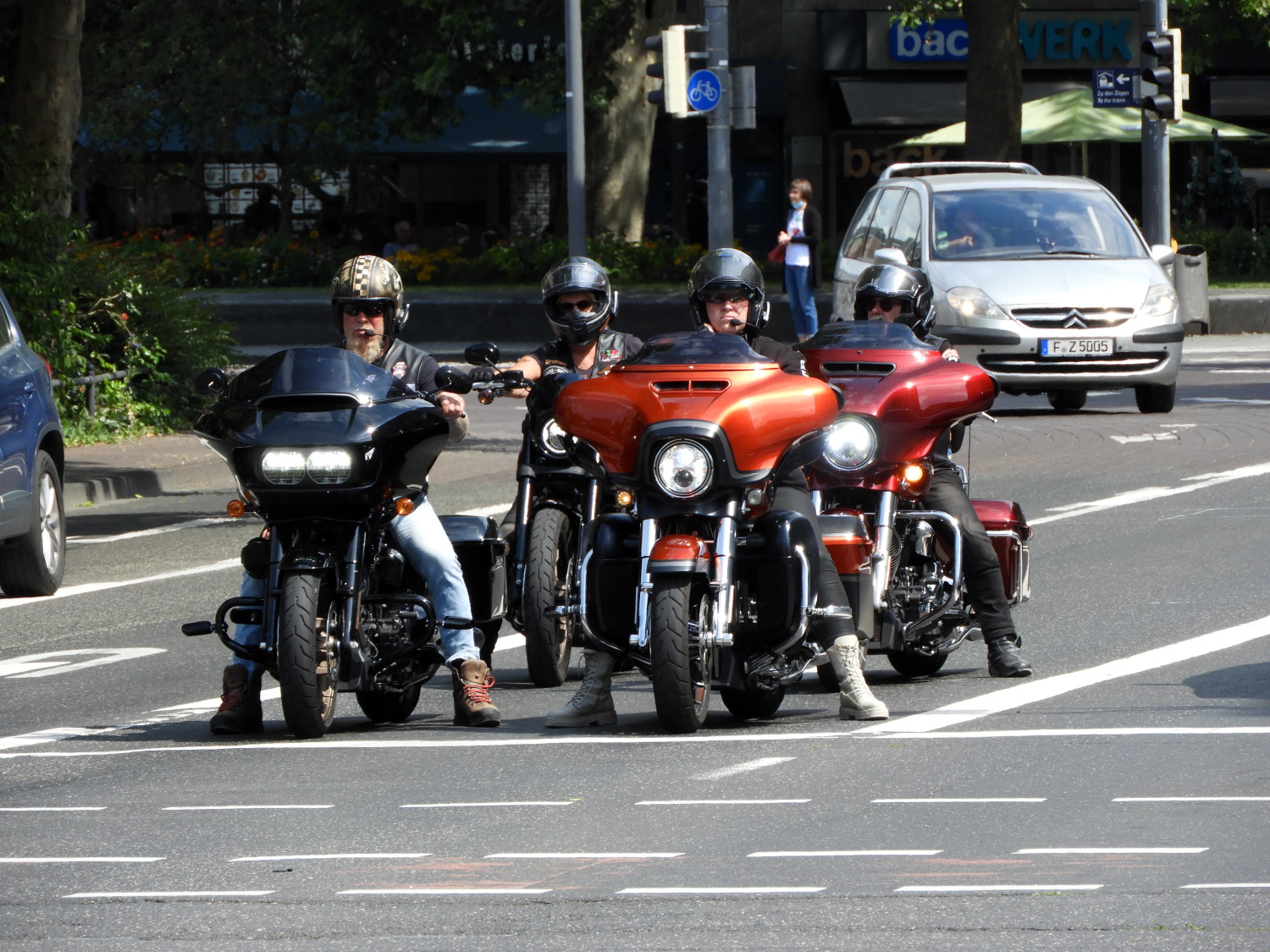 From the Hauptfriedhof we soon passed the impressive building housing the Brüderkrankenhaus St Josef. My recent German learning told me it was a hospital; krankenhause literally meaning 'house for the sick'. I was chuffed I had bothered to learn the basics and it was here in the city that Lil and I would most use of new language acquisitions. For now through all I needed to follow was the line on the map on my smartphone which was unerringly leading us towards today's destination at the meeting of the rivers. As we walked on, along Lohrstrase we watched the stirrings, including the appealing sight of a troupe of mature hells angels motorbiking along the road. 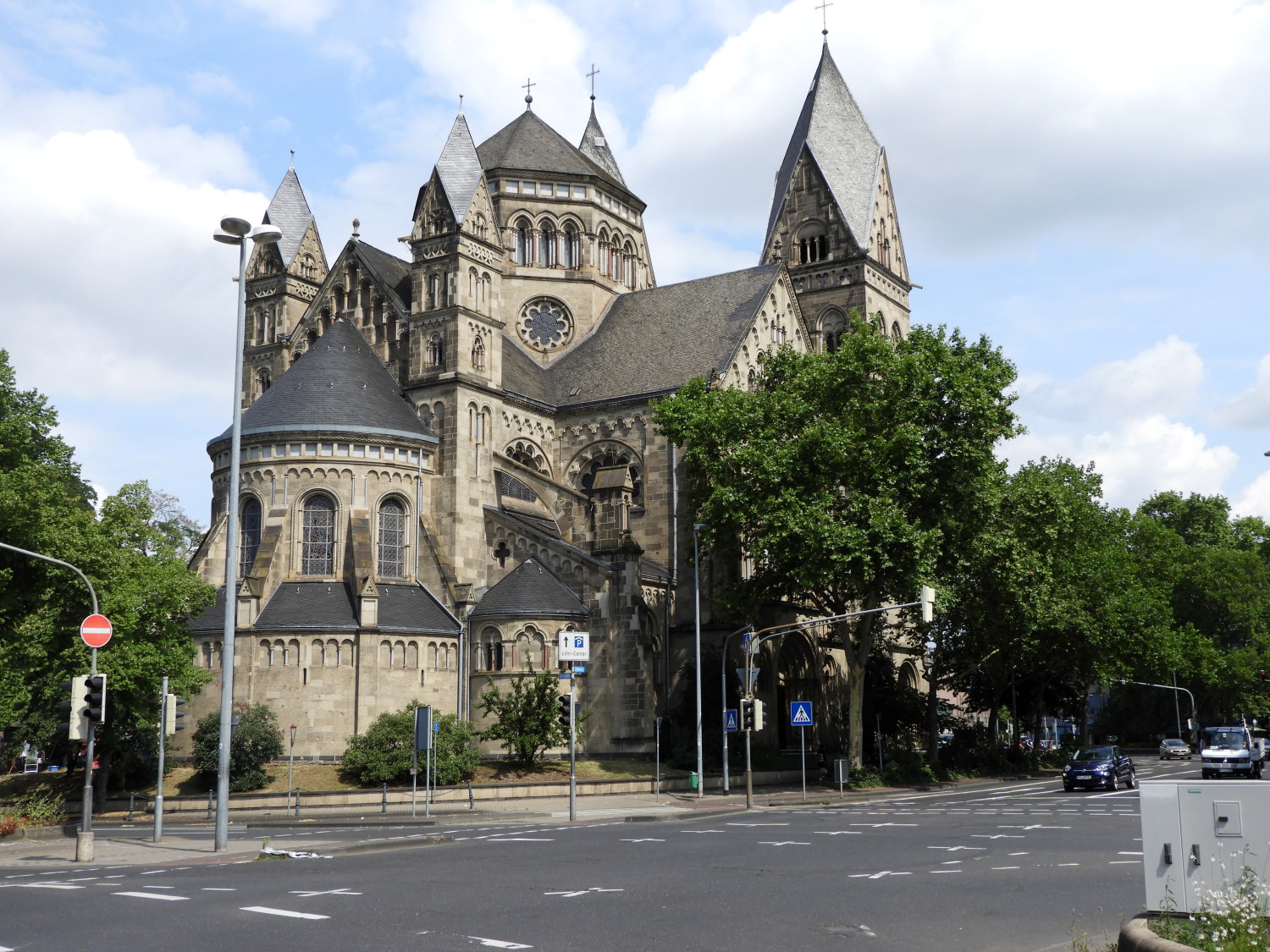 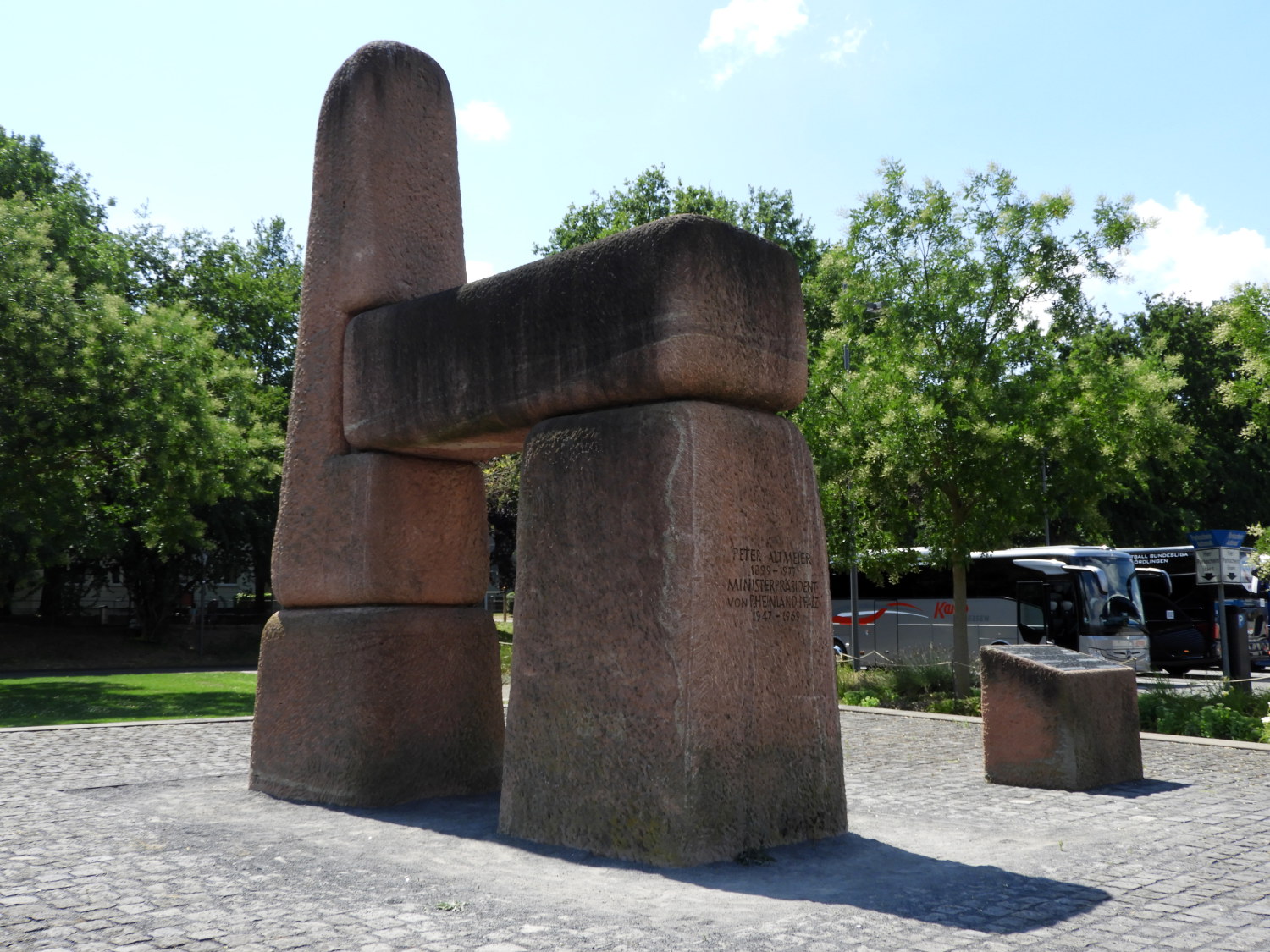 On Lohrstrase we passed the impressive building of Herz-Jesu-Kirche. The church is not as old as it looks, built in 1900, just a young one in church terms. From here we continued from Lohrstrase trafficked to Lohrstrase pedestrianised, leading all the way to Peter Altmeier Strase on the south bank of the Mosel and which leads all the way to the Memorial of German Unity, our stage end where the Mosel flows into the Rhine. We passed a number of artworks along Peter Altmeier Strase, non more so than the one dedicated to Peter Altmeier himself, the former Minister-President of Rhineland-Palatinate. 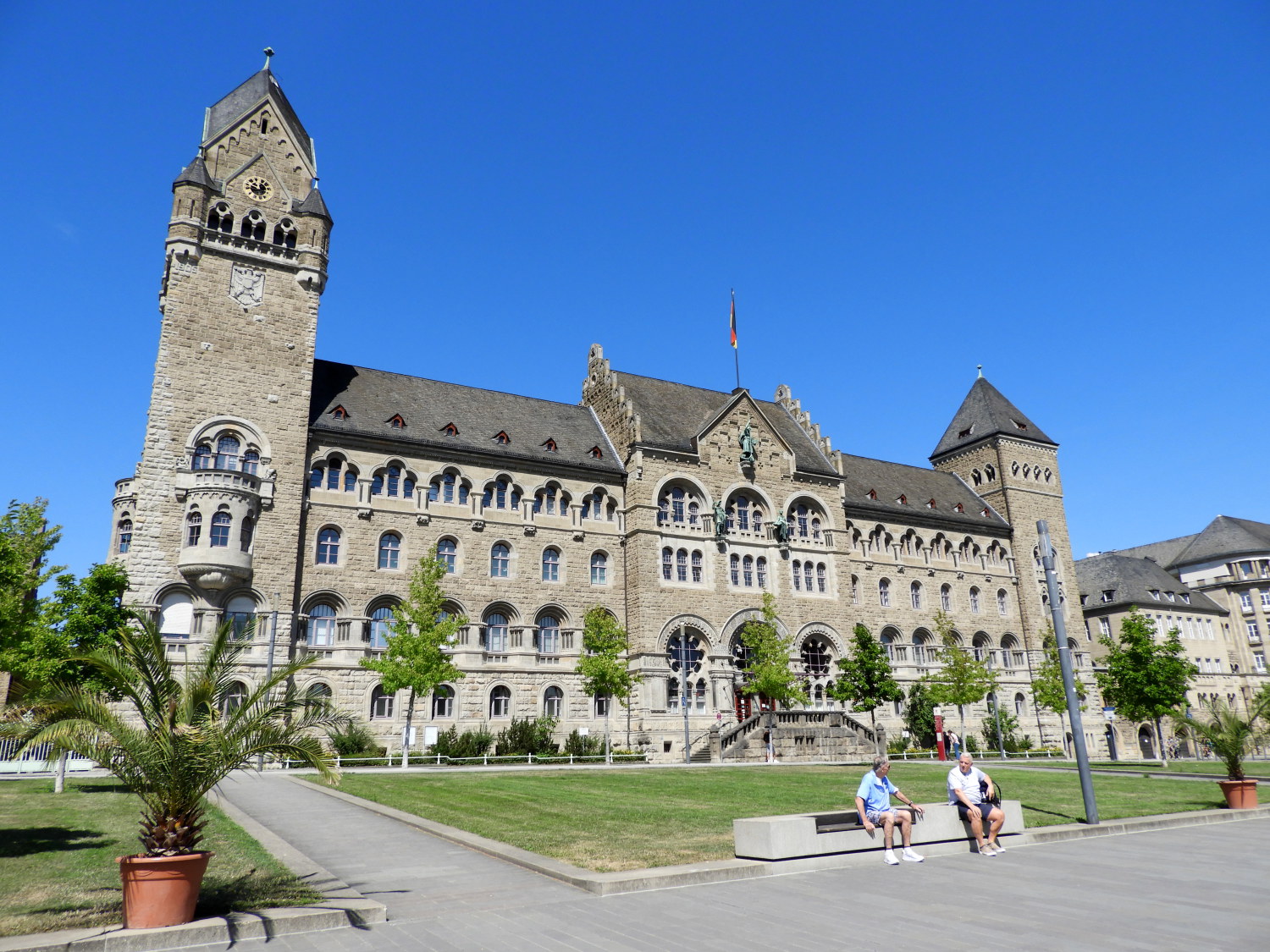 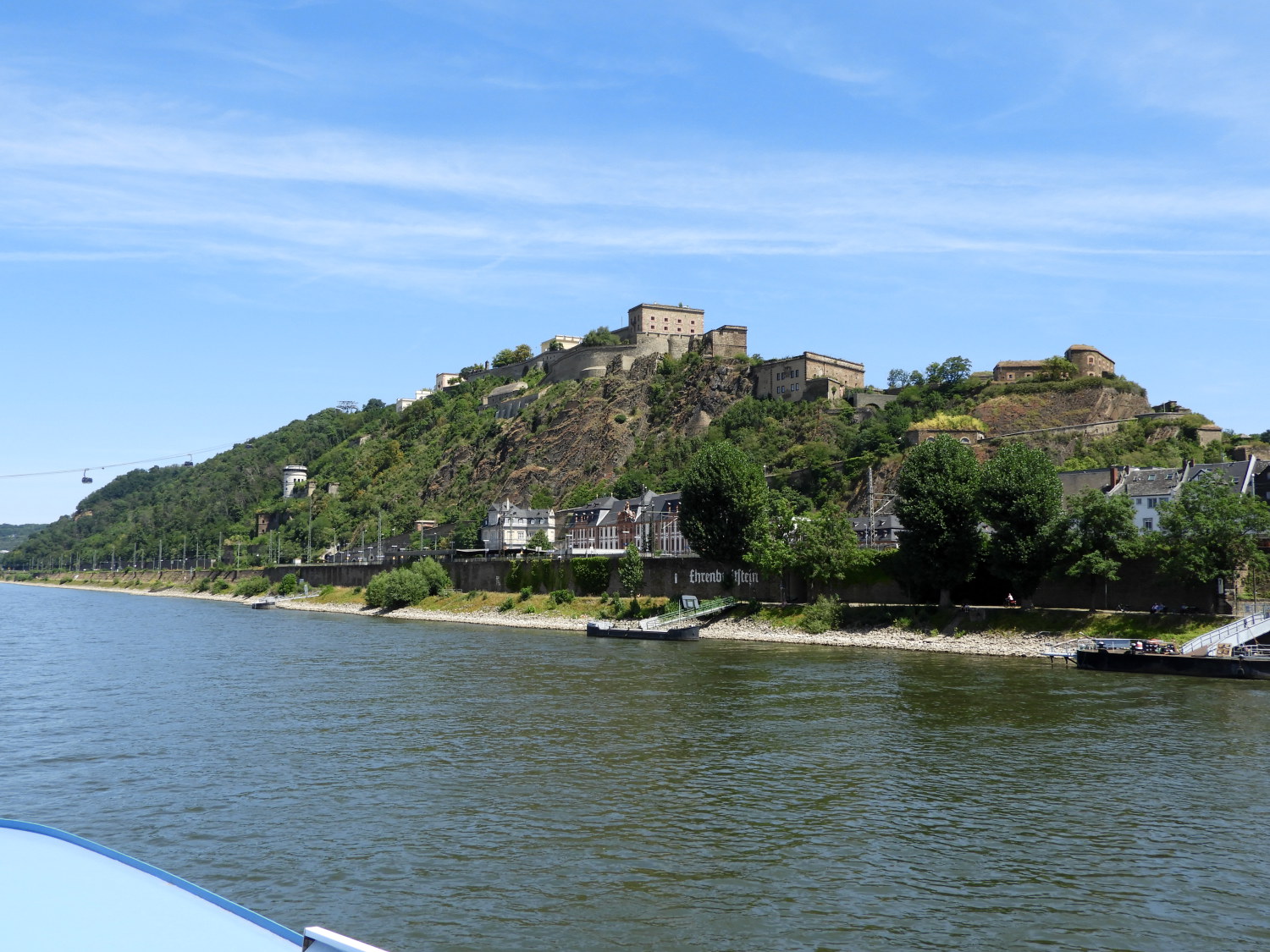 View across the Rhine to Ehrenbreitstein Fortress

Walk done, stage six complete and nominal halfway point of our Rhine Castles Trail; it was time to celebrate. The following pictures are a selection we took from our break in Koblenz. On the first of our two days off we took a river cruise along the Rhine from the Memorial of German Unity to Stolzenfels where the all white fairytale castle overlooks the river. We would pass the castle by forest on the top side ands not see the river facing side so to see it here was a glorious bonus. Scholss Stolzenfels is spectacular when seen from the river. As were many other impressive locations like Preußisches Regierungsgebäude, the former headquarters of the old Prussian government and Ehrenbreitstein Fortress, on the far side of the river which defended Koblenz during the Napoleonic wars. We visited Ehrenbreitstein Fortress during our wedding anniversary day. Exceptional views of the city were enjoyed from there, see image below, but we also fried on the hottest day of the heatwave. Everyone was seeking cover from the scorching heat on that day and we were glad to on a day off the Rhine Castles Trail. It was so hot cool water spray stations had been set up in places and whenever I found one I went in for a cool off. 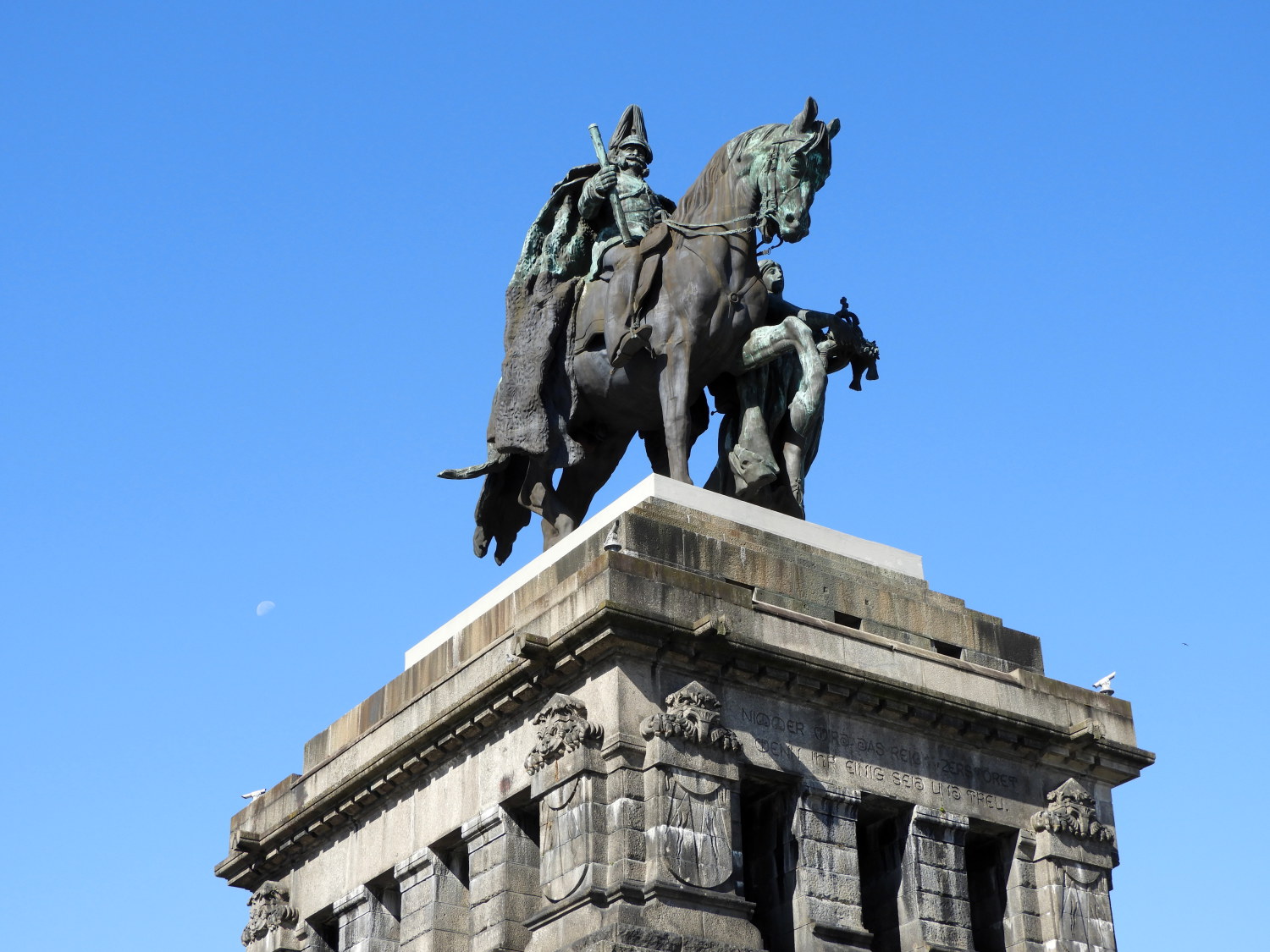 Statue of Kaiser Wilhelm I 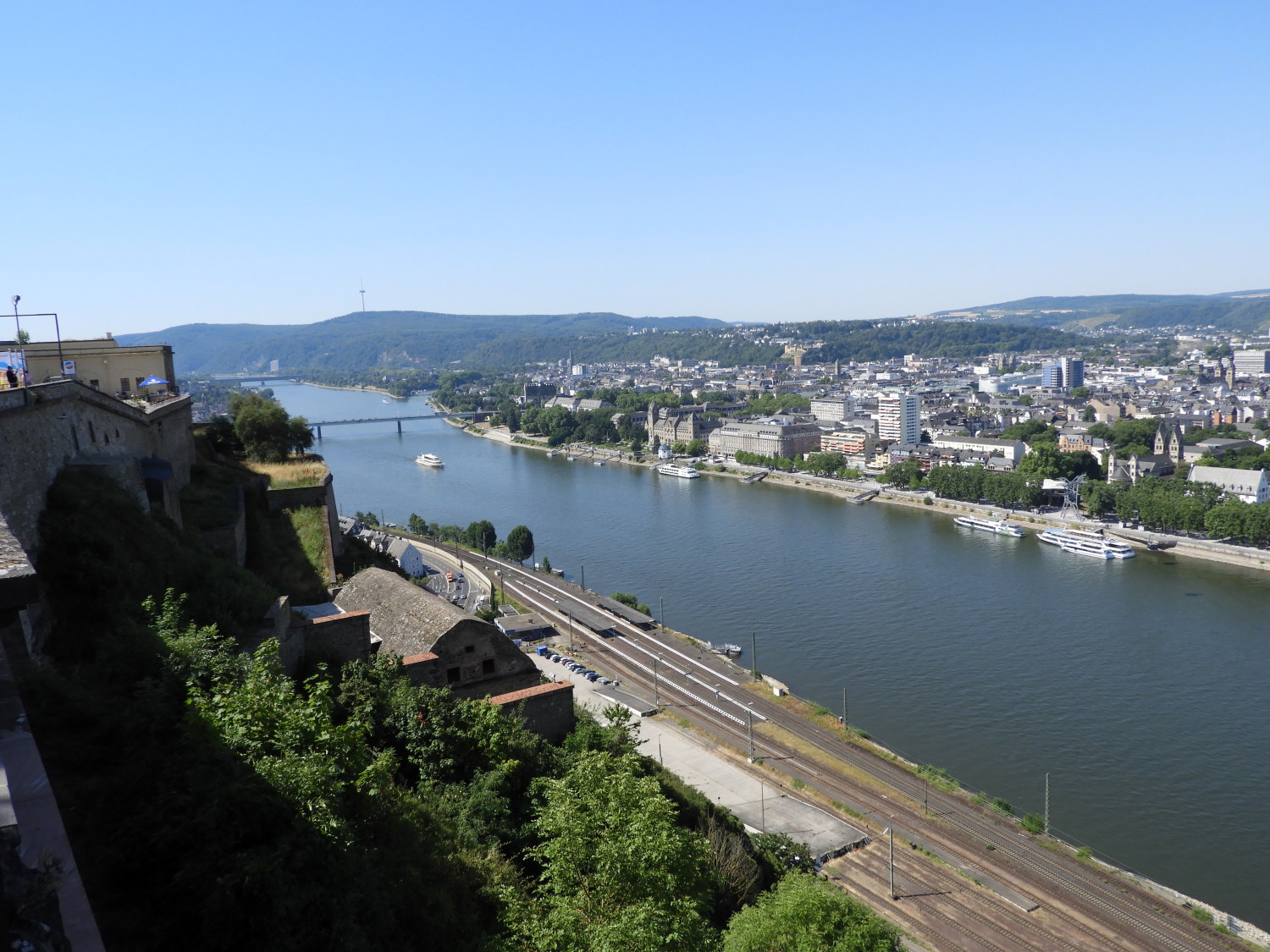 View of Koblenz from Ehrenbreitstein Fortress

We thoroughly enjoyed our two days off in Koblenz, the two days either side of stage seven from Koblenz to Rhens. On the first day off we took the river cruise and on the second day off, our wedding anniversary, 19th July, we took the cable car crossing of the Rhine to the Fortress. Of course we did other thinks too, cafes, wining, dining, sight seeing and the like. It was lovely, especially for me with the thought that not only had Lil walked six stages of around 60 miles with approximately 2,00 metres of climbing. But that she had enjoyed it. Managing it without too much bother too, and no sign of any physical complaint. I was so proud of her and now thinking she was going to make it to the finish no problem. All was good in our world.