We were keen to walk this stage as the meat in the sandwich between free days off in Koblenz. The first day off had always been in the plan to celebrate our 19th wedding anniversary and the second was a bonus granted to us by us for walking stages four and five in one day. Because of the extra day off, we could walk this stage without backpacks. Or at least Lil could as I carried food, drink and the necessary emergency kit - still nowhere near the weight of also having to carry some our clothes though. The reason for this is that we would walk to Rhens today and then get a train back to Koblenz as we were still staying in the city tonight. And then tomorrow, the wedding anniversary day, we could do our planned cable car trip across the Rhine, see the fortress, sightsee in the city a bit and then still have time to catch a train to Rhens where we would be staying the following night. Therefore we would be in the right place at the right time to start stage eight in two days time. 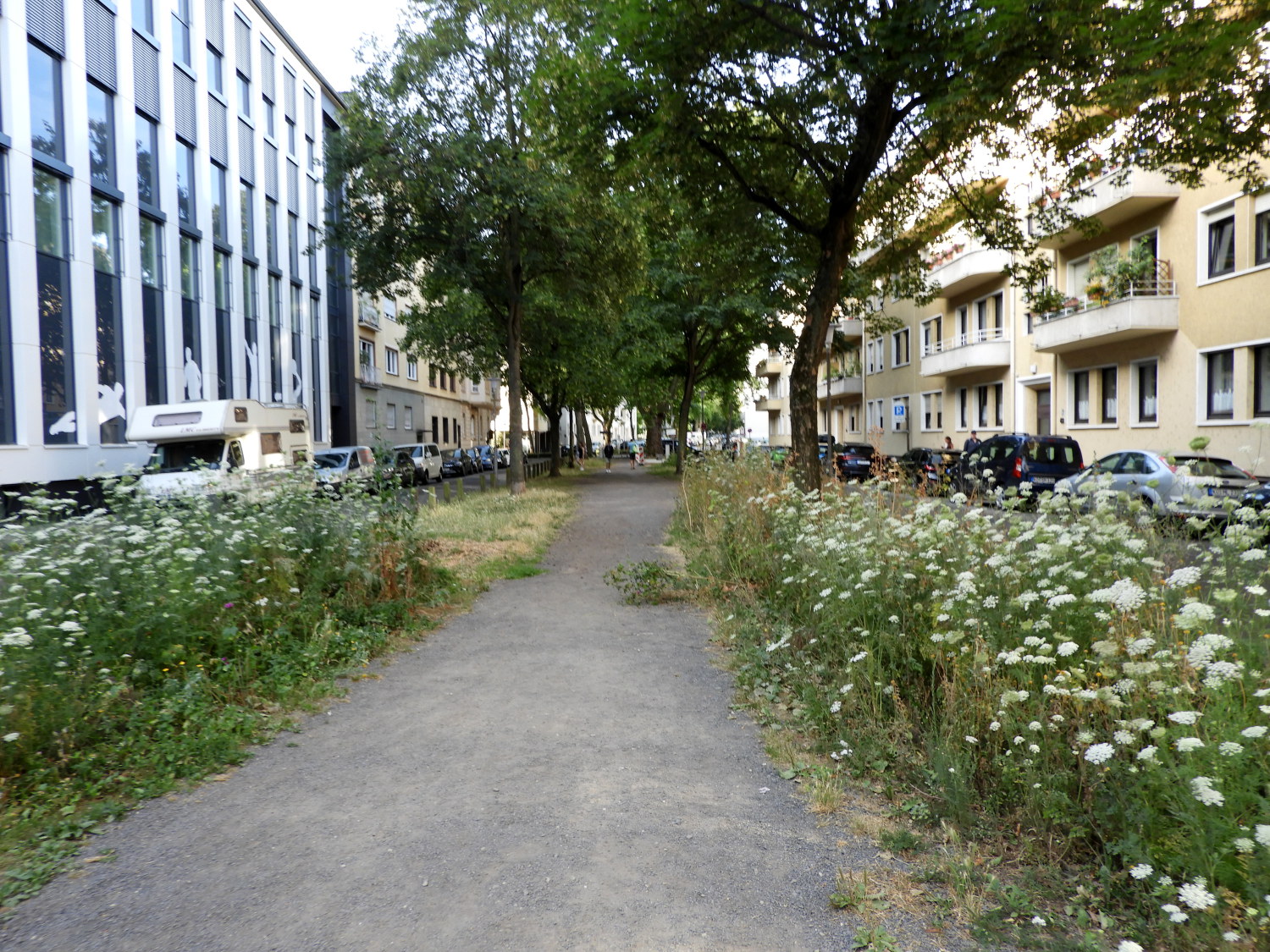 Green avenue through the streets of Koblenz 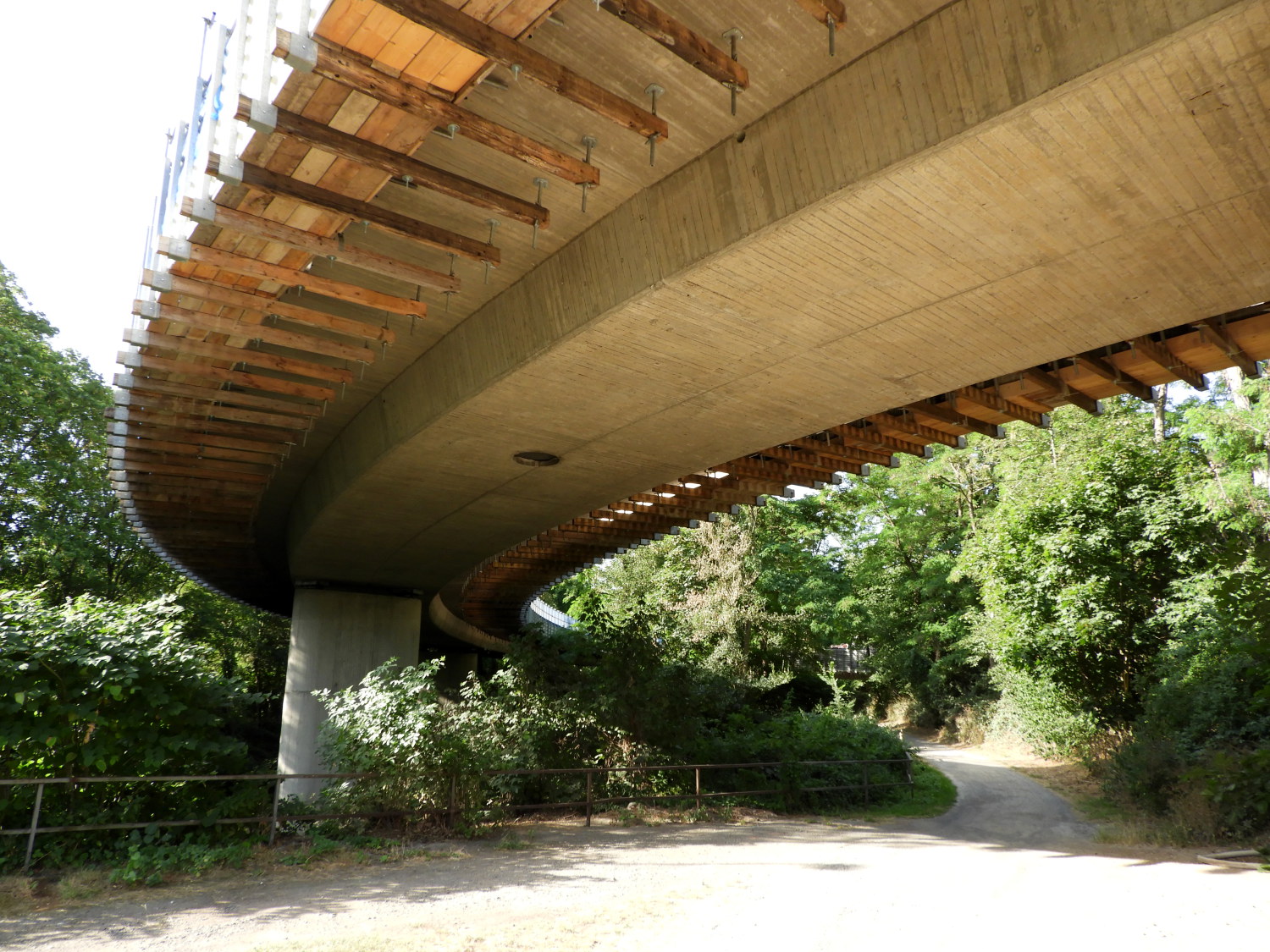 The old and the new

This was the week of extreme high temperatures in Europe, even topping at over 40 degrees Celcius in England. And here, in Koblenz, it warm enough at seven o'clock in the morning for us to set off on our walk to Rhens in just t-shirts. My not having to carry the weight of a fully laden backpack helped too; Lil not carrying one at all for this extraordinary stage of the Rheinburgenweg. We started off with breakfast at an early opening cafe on Mainzer Straße before walking along the green avenue of Sudallee between blocks of apartments leading to St Josef church and from there on Mainzer Straße once more to arrive at the community of road junctions and flyovers in the south of the city where the Rheinburgenweg path is found, leading into the green woodlands of Naturlehrpfard am Waldpark. Back into nature we found we were also now following a stretch of the Welterbesteig Oberes Mittelrheintal, translated as World Heritage Trail Upper Middle Rhine Valley. 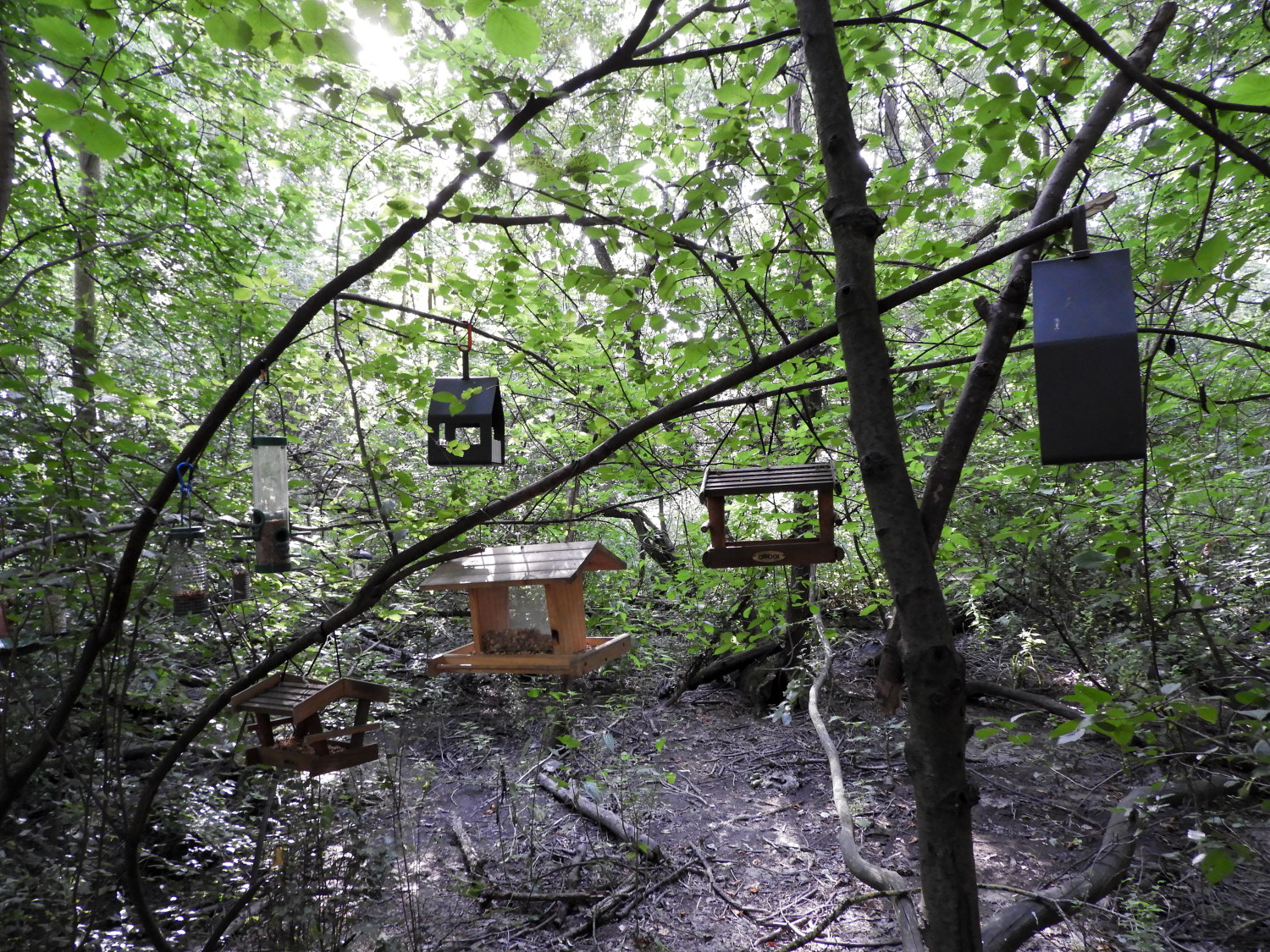 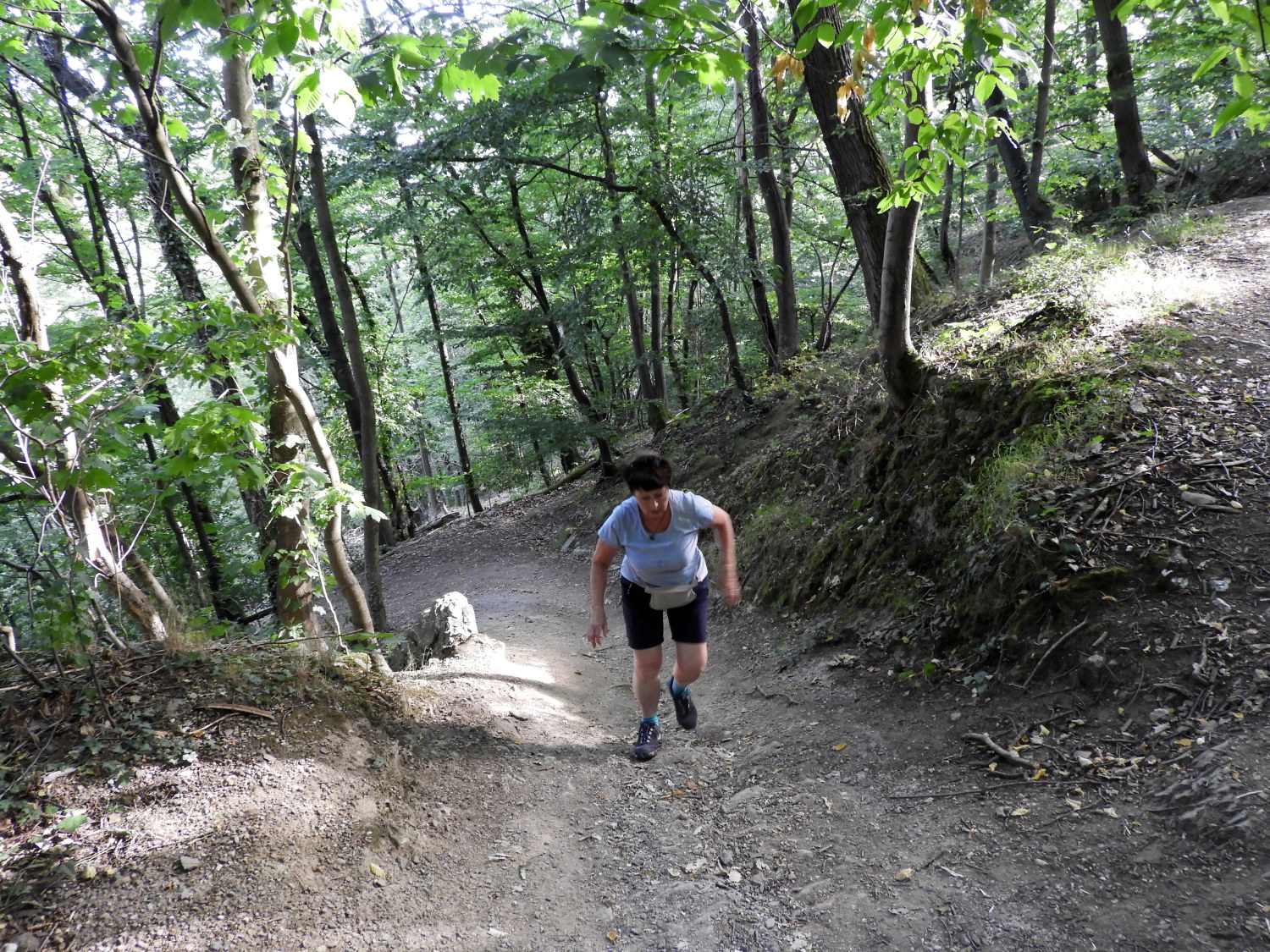 Walking from Koblenz city centre to the south edge of the conurbation had been pleasant. And easy. Watching the city wake up as we walked out of it was an interesting diversion with youngsters heading off to school, workmen setting up for the day, shops raising the shutters, yawns being stifled, greetings between neighbours being made. It was a lovely observation. Now for us though the hustle and bustle of a city waking was replaced with a focus on effort. The first climb of the day, up and up through the woodland, to Rittersturz, faced us. It was just a short, sharp 100 metre ascent, But after a flat start through the city it was still an abrupt wake up to the reality of being back on the trail after a day of easy sightseeing and river cruising in the city yesterday. The climb through the woods was made in a series of zig-zag turns, arching steeply up like vehicles on a switchback alpine road. 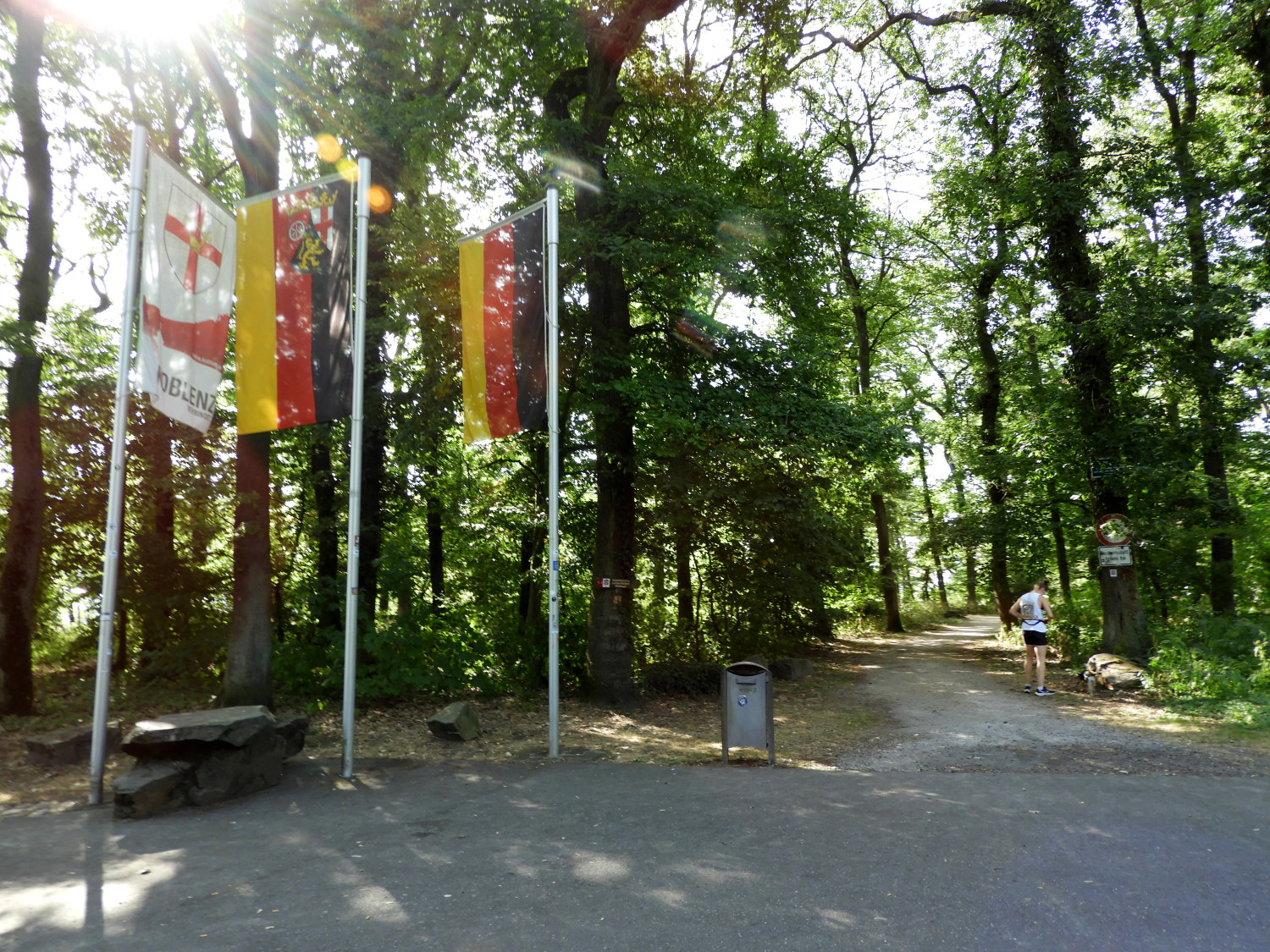 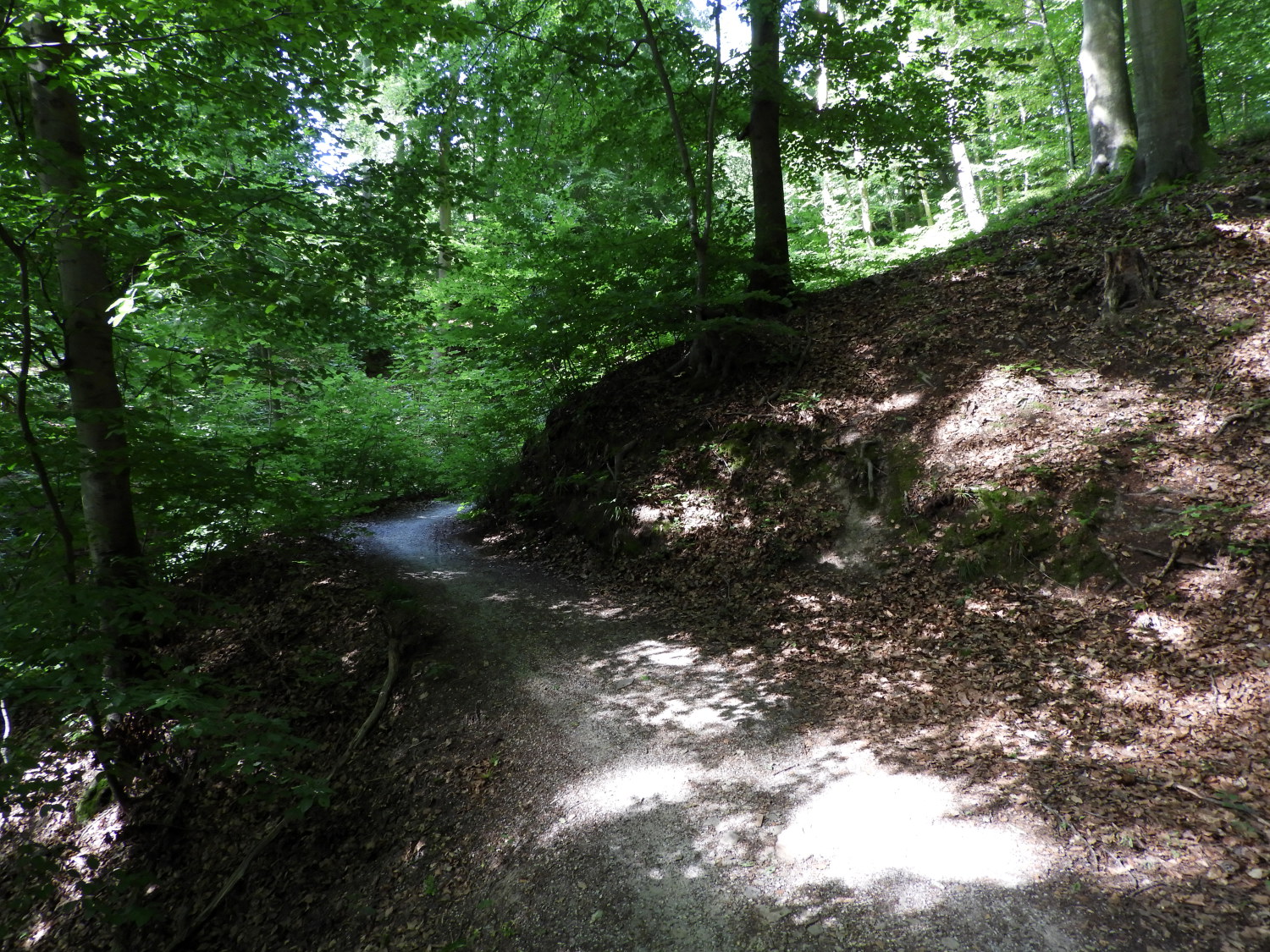 After the climb, which after a week on the Rhine Castles Trail was now quite easily managed, we rested for a minute or two beside the line of flags hoisted at the site of Rittersturz Conference Centre. There is an upright stone obelisk at the site too. It was here, from 8th to 10th July 1948, where the former Berghotel Hotel on the Rittersturz hosted a conference which determined the merger of the three western occupation zones of postwar Germany into the Federal Republic of Germany and thus the foundation of West Germany. And subsequently East Germany too. The hotel has since fallen down, finally demolished in 1978. Eleven years later East Germany fell too and Germany was reunited. History lesson over, back to the walk. Which resumed with a delightful walk through exquisite forest towards Dommelberg. 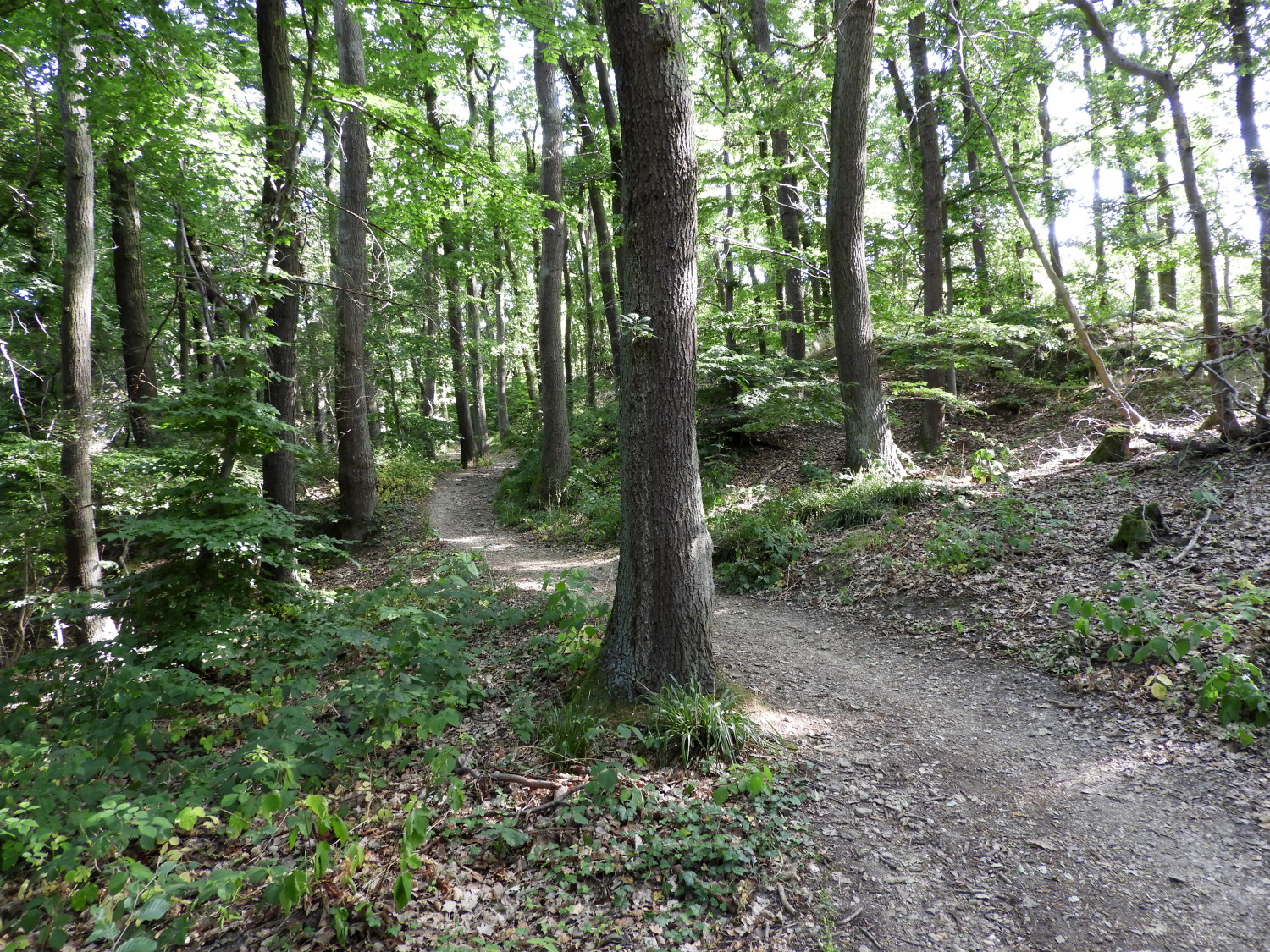 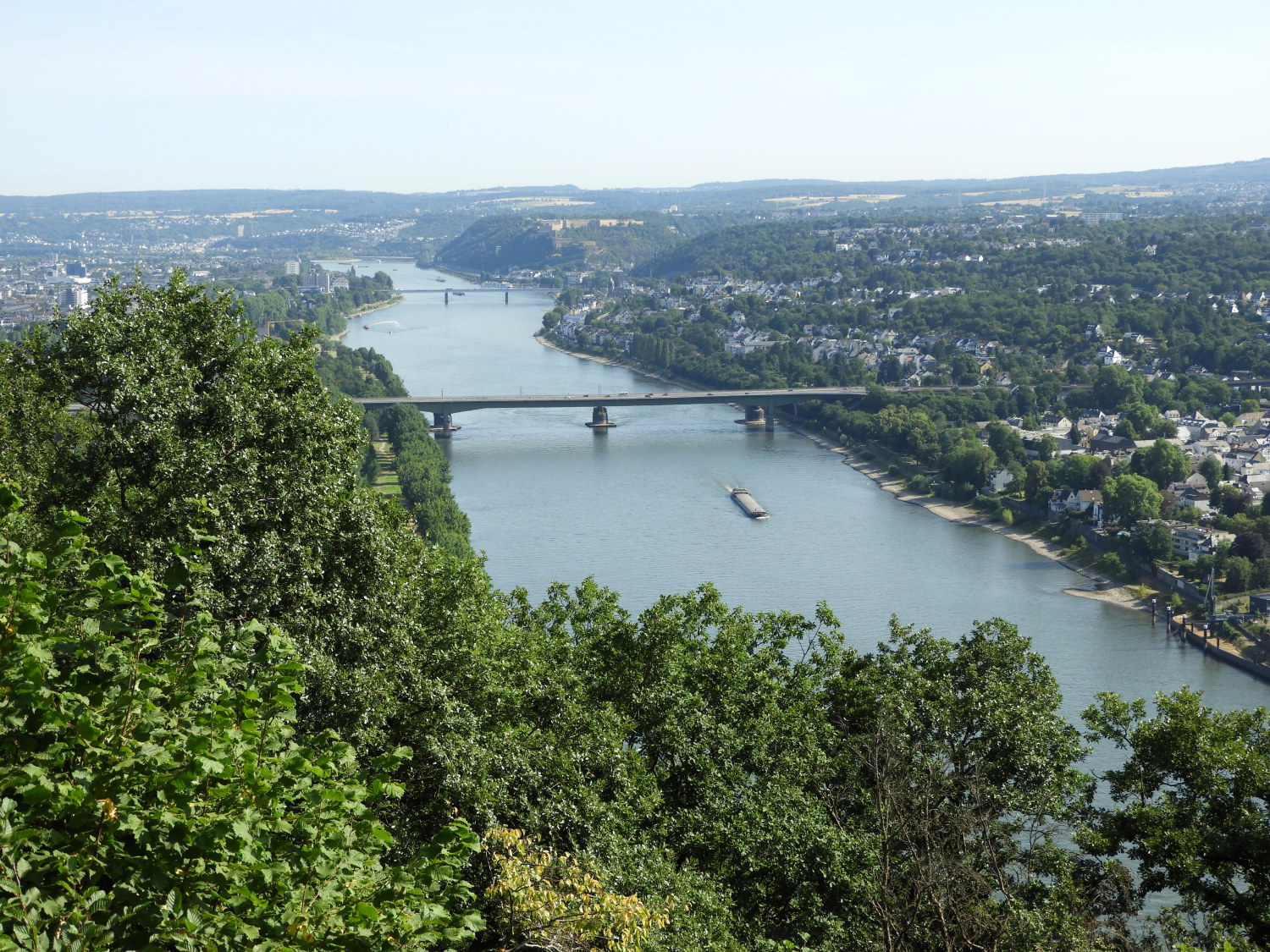 View of Koblenz from Dommelberg

Regular readers of my long distance walks will know I have a love/ hate relationship with forest trails. Sometimes they can be boring and downright attritional, a long slog on a very straight rutted access track through plantation such as the forest track beside Loch Lochy on the Great Glen Way in Scotland. That was featureless, bland and fatiguing. This forest walk from Rittersturz to Dommelberg was its polar opposite. A delightful meandering footpath on the trail staying close to the Rhine, albeit 100 metres higher, which, on occasions, invited Lil and I to enjoy sumptuous views of the river stretching back to Koblenz in the north and to Lahnstein, sitting on the opposite bank to Stolzenfels Castle in the south. 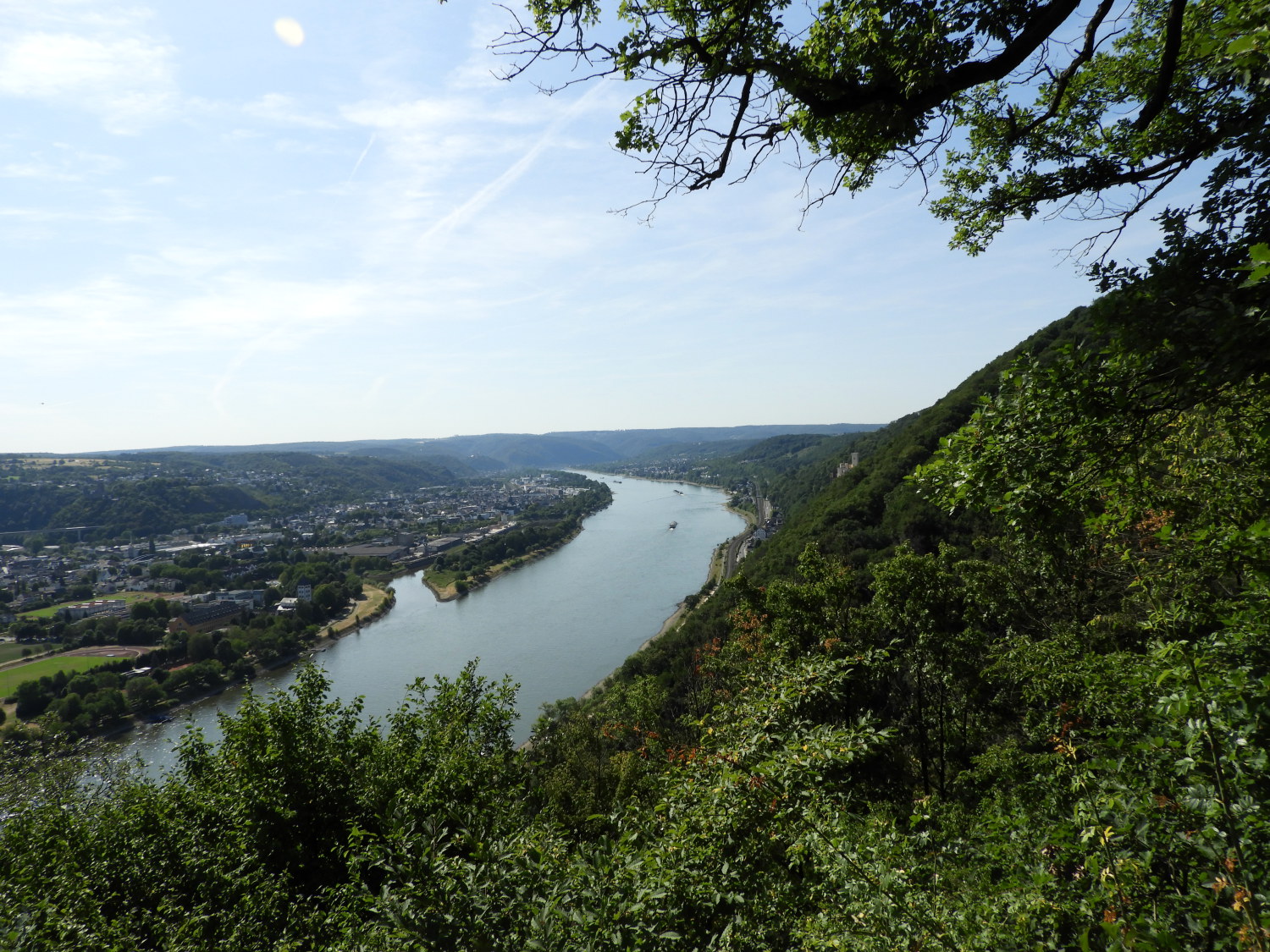 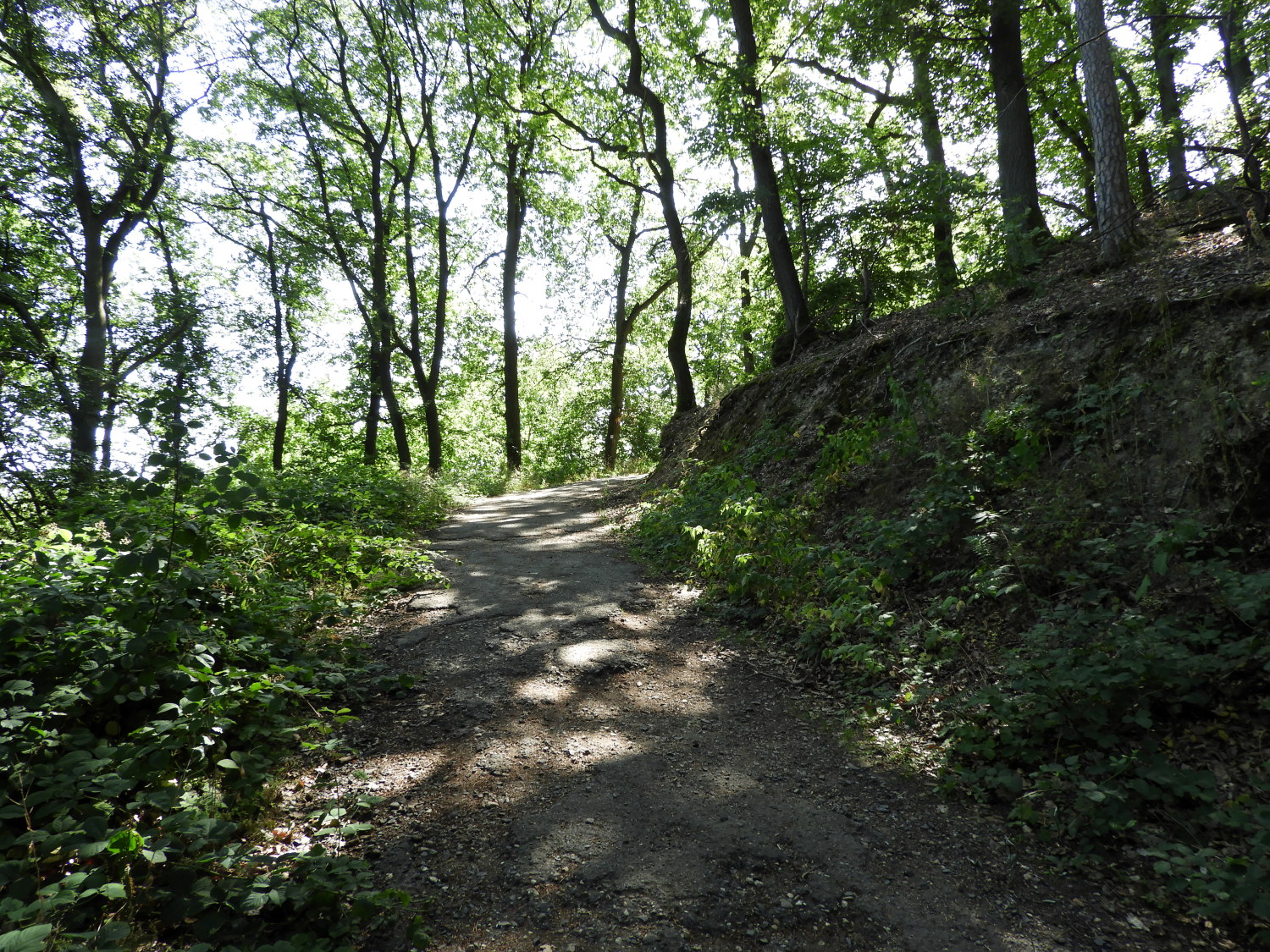 The Germans love their exercise. On just the second stage of the walk, from Remagen to Bad Breisig, we had met the Yoga Trail and tried out a few of the poses demonstrated on information boards. Now, on this seventh stage we came to an information board showing us a long list of positions used in Nordic walking. Titled 'Post-Sportverein' these included a number of body stretches using the poles as anchors. Not having poles ourselves, we could not try them. But there were a few such as the Brust-und Armmuskulatur we could have a go at. Why not. The exercises and views to the Rhine kept us entertained on our way through the forest. As did the views within it, altogether beautiful. 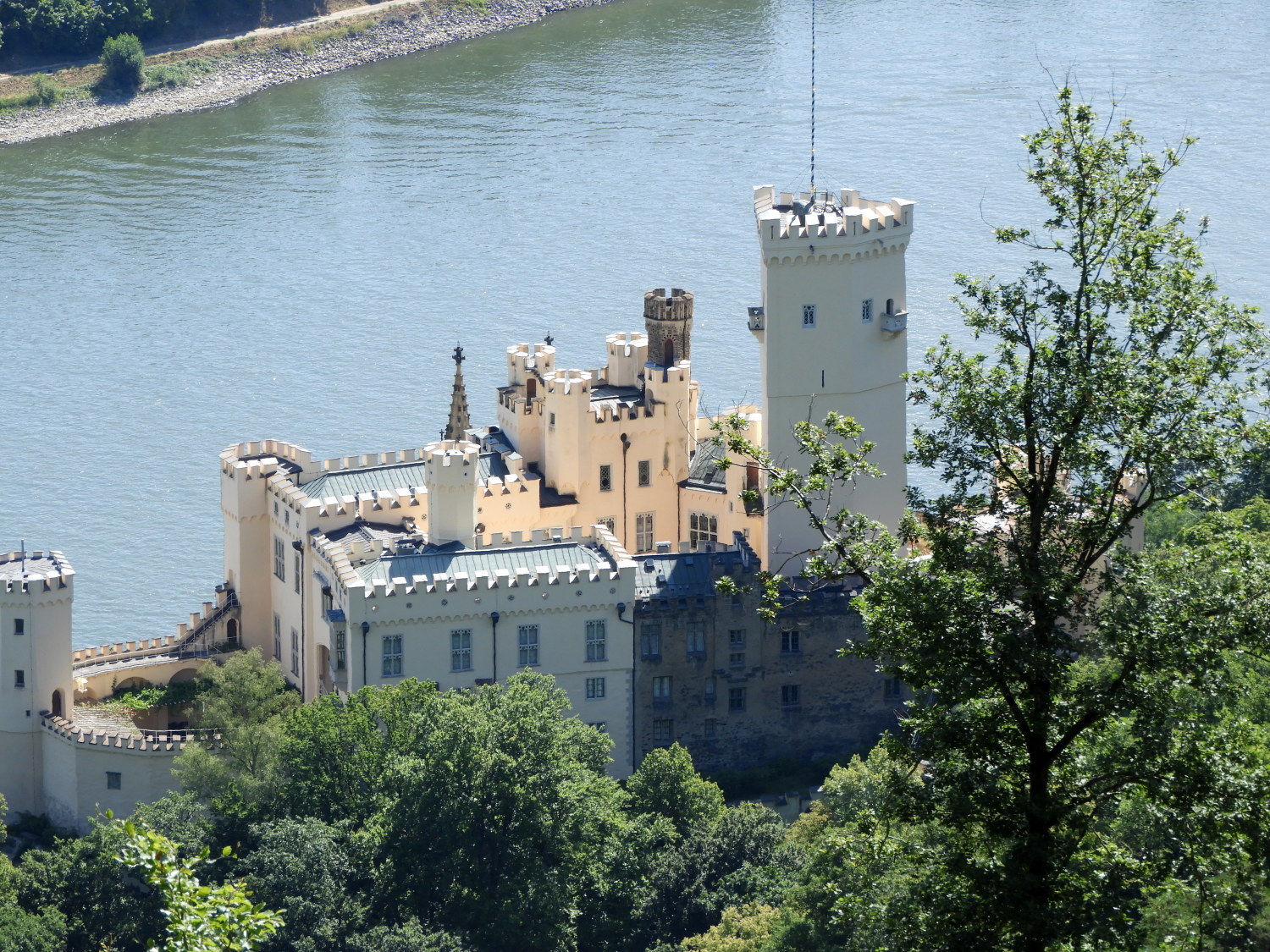 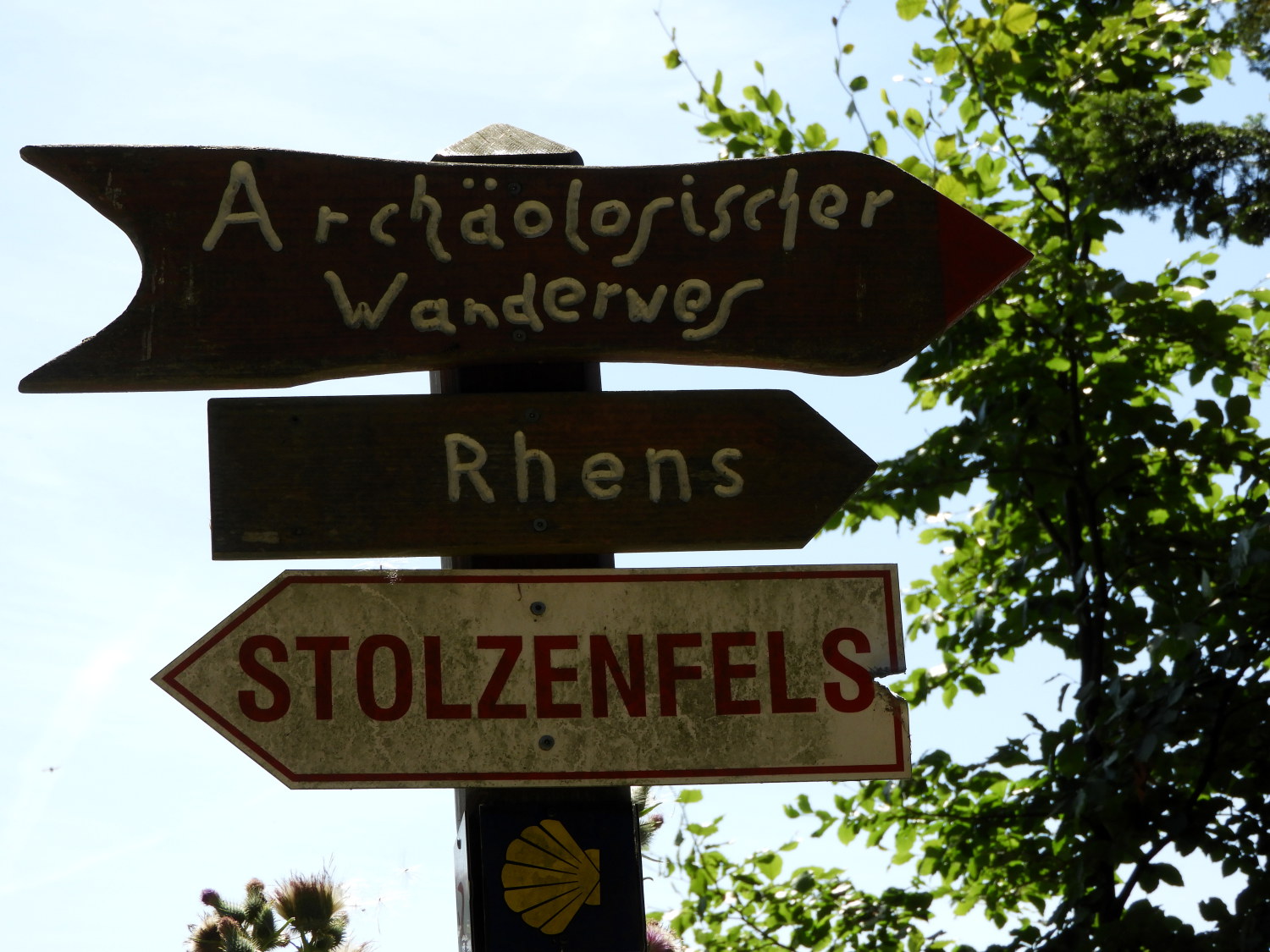 After around five miles of walking, just about half way into a particular stage of the walk, we arrived at the point where we could look down upon Stolzenfels Castle. It really is a beauty. Cream coloured and fairytale castellated. Originally a 13th century fortress and rebuilt by Prussian Crown Prince, Frederick William in the 19th century as a palace, Stolzenfels Castle is now a World Heritage Site. After a week of lead up, Stolzenfels was the first of the real in your face castles we were to meet on the trail. Though we had seen some castles on the stages north of Koblenz, such as Arenfels and Namedy, both more like family palaces and now functioning as wedding venues, from here they were promised to be more numerous and grander big old fashioned castles. We looked forward to that. 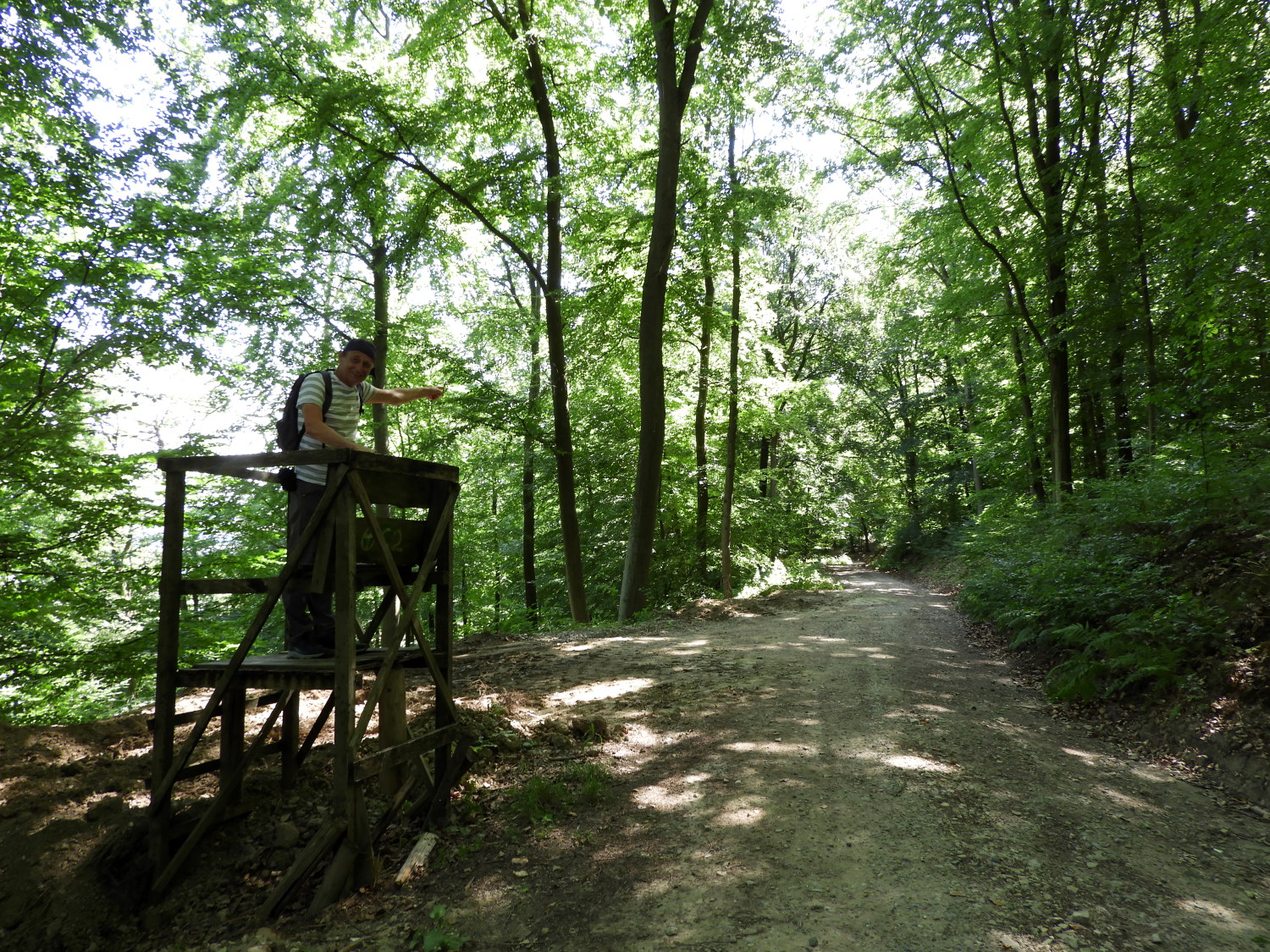 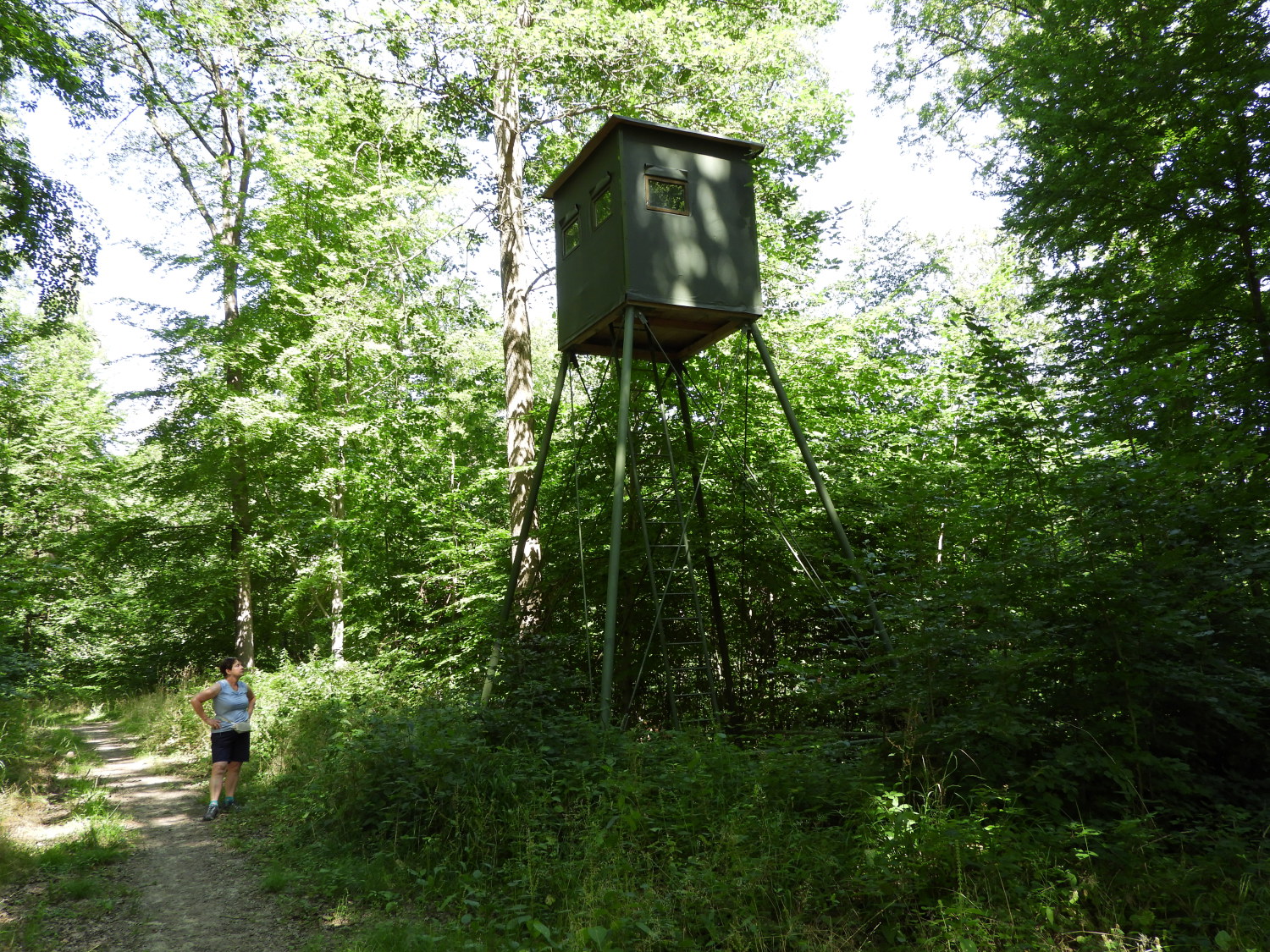 Soon after passing Stolzenfels Castle by we passed a series of interesting waysigns. One intrigued us, pointing to 'Schwimmbad'. My recent German learning was not necessary to interpret that. Nor was it required for the next one, reading 'Archaologischer Wanderweg', which we followed anyway as it followed our Rheinburgenweg path towards Rhens. These Archaeological hiking trails are numerous in Germany, many featuring sites of over 1,000 years old, leading back into Bronze Age and even beyond that. We did not have any more information on this historic hiking trail to hand and so we ambled along the trail oblivious to what ancient history may be around us. However, signs of recent human influence were to be seen, no more than the series of hunter's and ranger's observation huts which we passed on the trail. There was one at Schullerhof and another a little further on at Halbtritz. 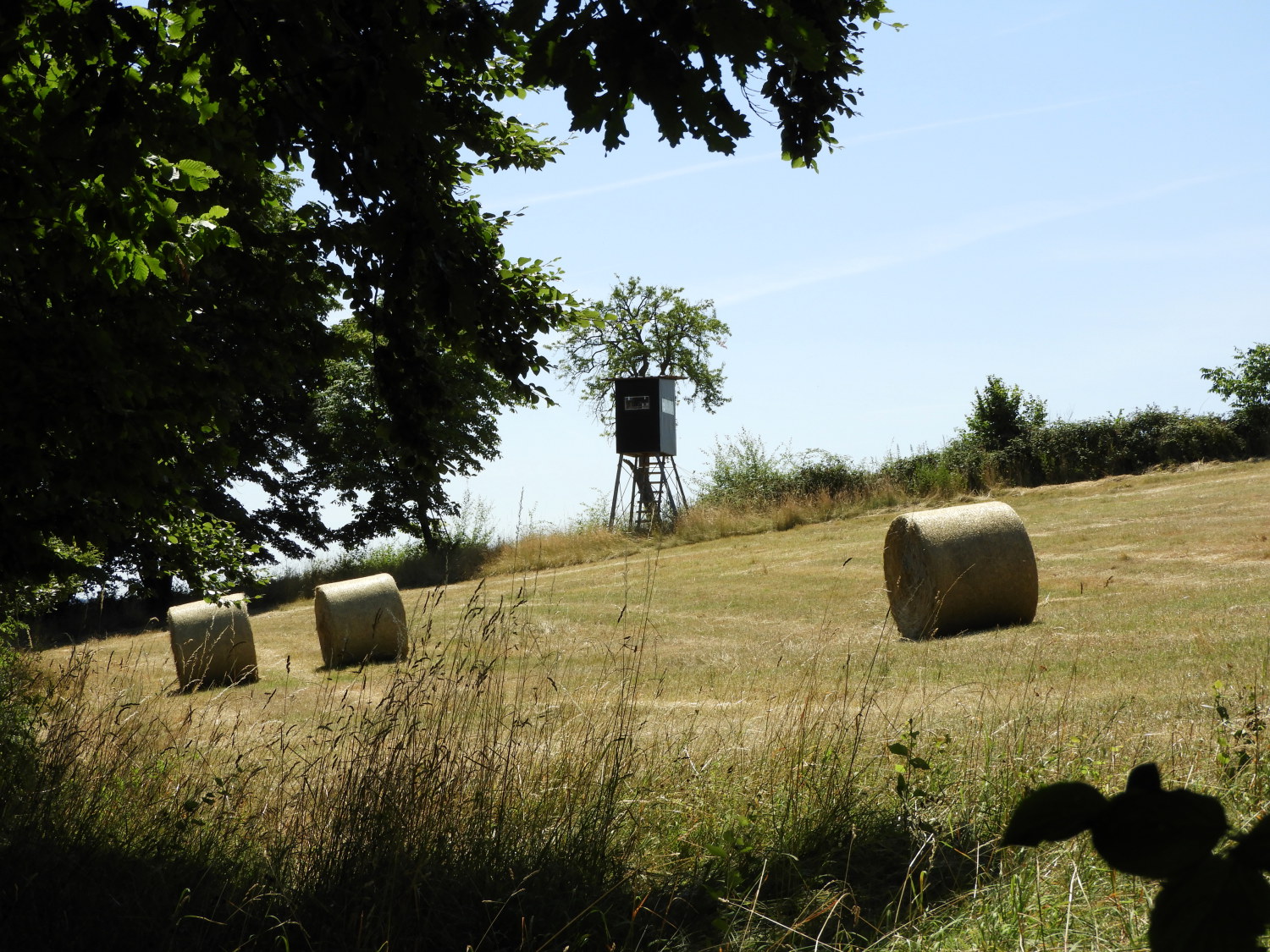 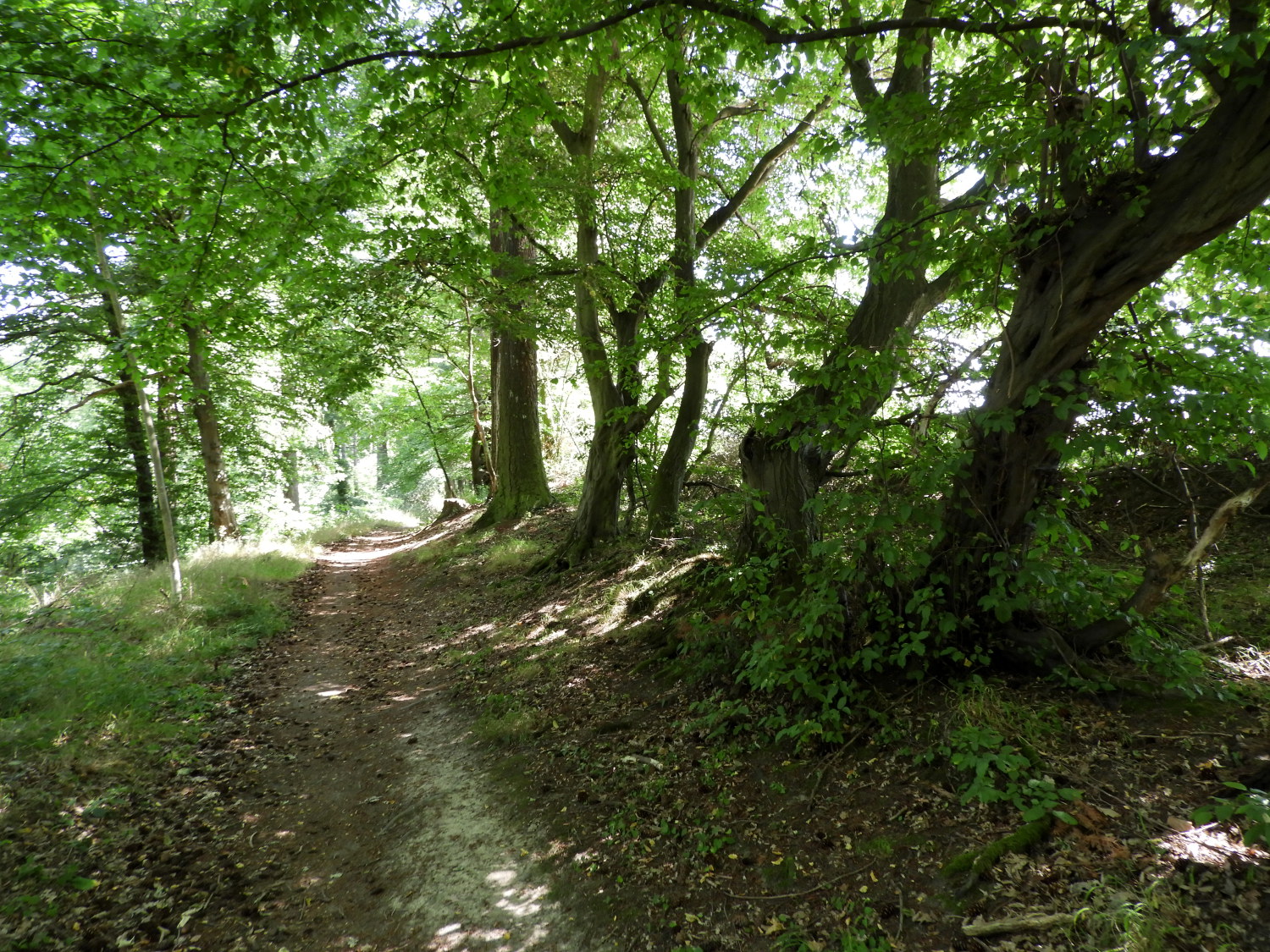 From Halbtritz we began the gradual descent from the hills to riverside Rhens. Without really noticing, as no significant climb had occurred to either of us, we had topped out on the walk at around 350 metres near Schullerhof. Now, having past the peak of our day, we were descending 280 metres in a three mile woodland ramble to the end of our seventh stage of the Rhine Castles Trail. Even though we were now on a downhill, in someway it was more difficult. The heat was getting noticeable as we approached eleven in the morning at Halbtritz with us descending to stifling temperatures when passing the farmlands of Philippsberg. We were constantly sipping away our water reserves, keeping just enough back to get us to the finish. 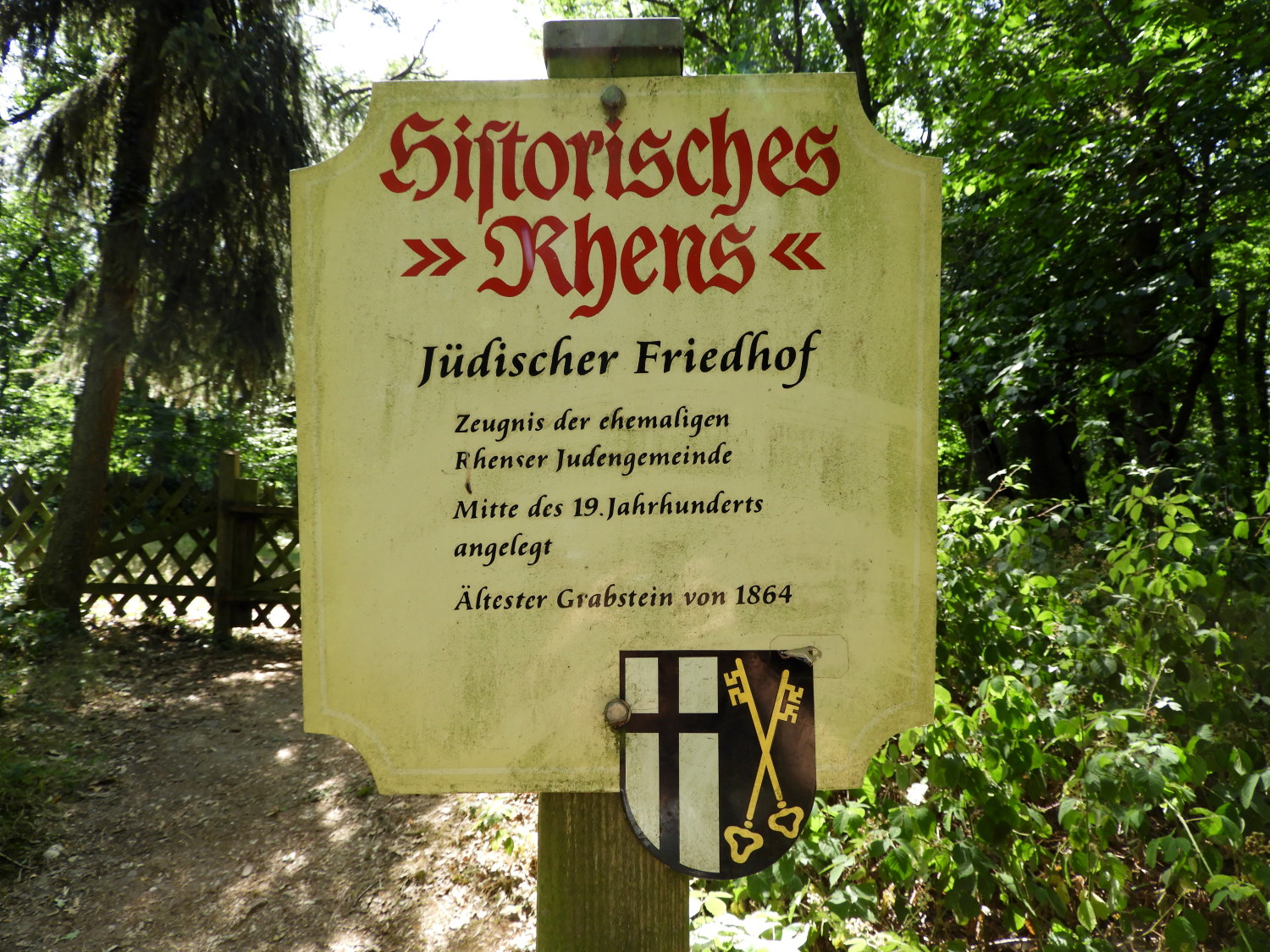 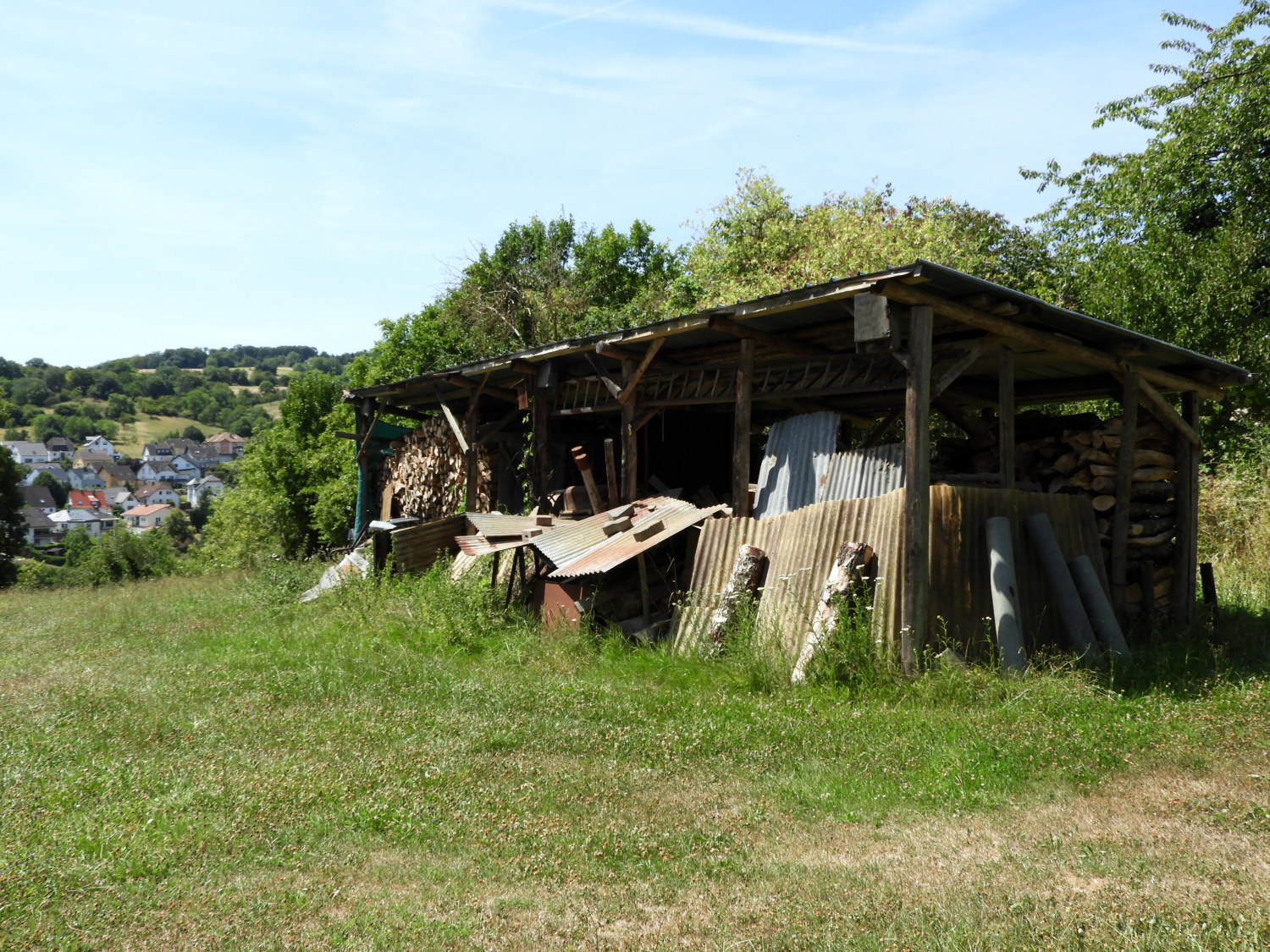 Philippsberg, as well as being a transition from forest trail to open farmland paths is also the place which leads to the site of an old prehistoric fort overlooking Rhens and the Rhine. To reach it though, we had to walk a stretch of open path fully exposed to the full strength of attritional sunshine. Phew it was hot. Lil and I covered our heads to keep the sun from frying us as much as we could and we were glad to cross a road leading to woodland shelter north-west of the historic town. Before descending back into the light though, we took a short break at the old earthworks which gave us a great view of the Marksburg Castle, standing proud on a wooded hilltop across the Rhine from Rhens. It was a stupendous sight to behold. 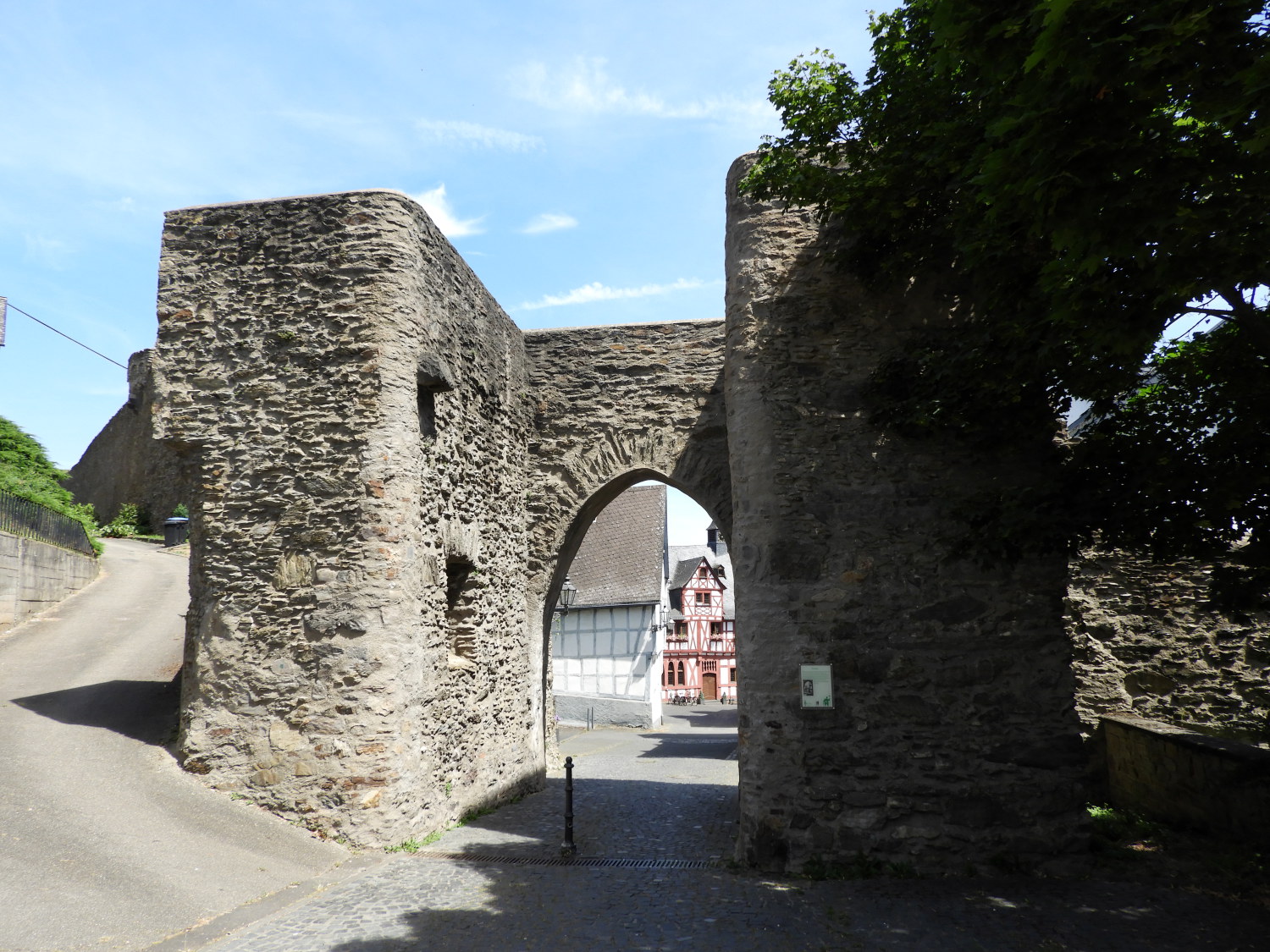 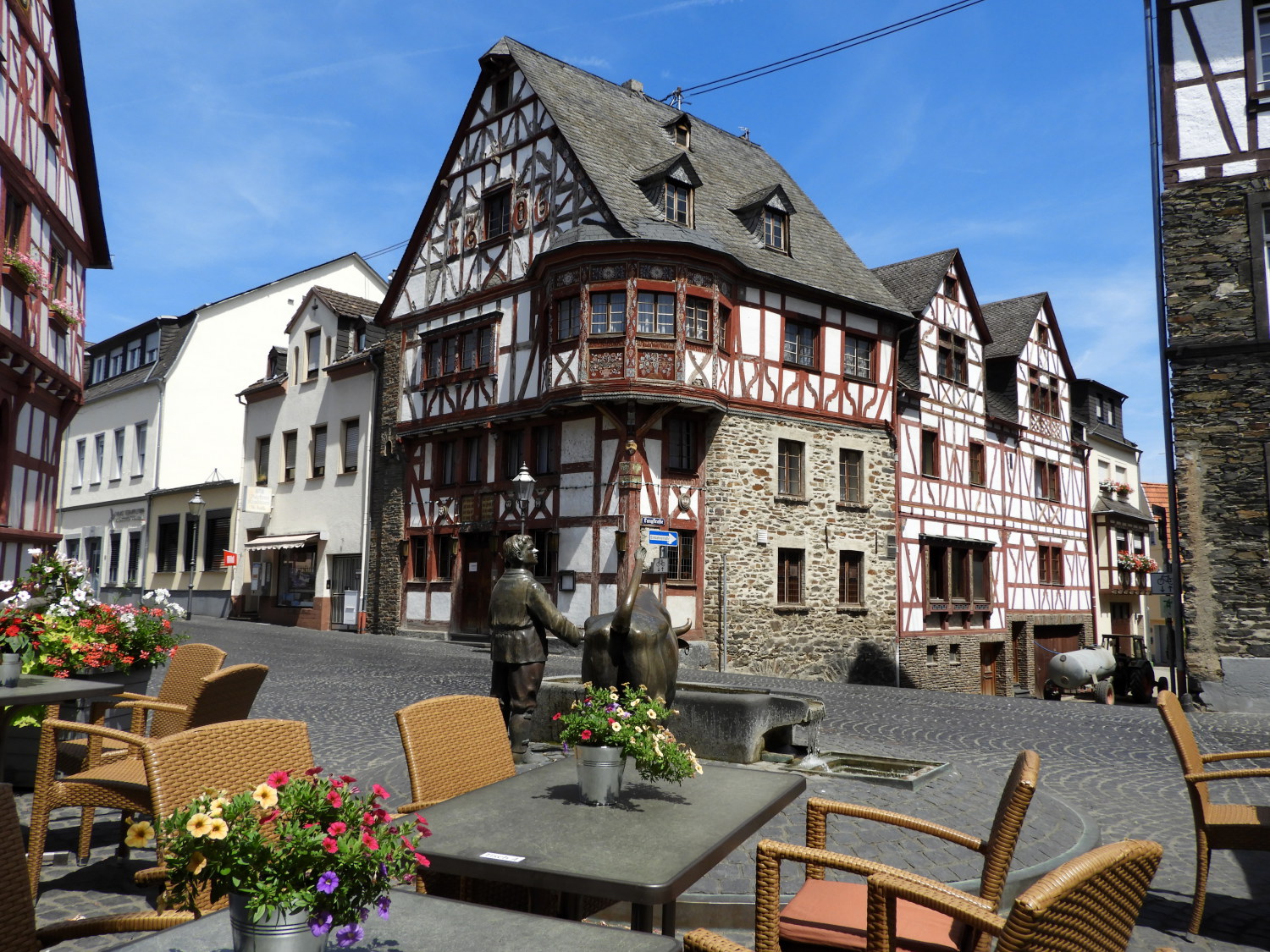 As good as the views from above Rhens of the town, Rhine and Marksburg Castle were, they were matched by those which invited us into the heart of Rhens itself. As the sign 'Historisches Rhens' had promised on our way down from the hills above, we were immediately smitten by the place. From the first sight of the old town entry gate to the spectacular timber clad houses of the old central quarter; Rhens is exquisitely beautiful. Having exhausted our water supplies on the sweaty clamber down from the hill fort I called into the Vollkorn Backerie for a melange of treats including coffee, lemonade, cake and chocolate. Indulgent but very well deserved after walking from Koblenz on one of the hottest days I have ever hiked. And probably the hottest Lil has hiked in so far. It must have been around the 40 degree #elcius mark as we feasted in the shade of a parasol covered table in the marketplace. It was lovely and relaxing. Except for the wasps which knew this place well as an opportunity for sweets while annoying the sitters. It was not the first time, nor the last time, these airborne assault insects would bother us on the walk. Anyway, these sneaky critters apart, we had enjoyed a fantastic day. For now, after refreshments, we located our hotel for tomorrow night before finding the railway station to take us back to Koblenz. Still there tonight we had the second day off tomorrow. Before being back here in this market square in about 40 hours from now to continue on our Rheinburgenweg Trail.