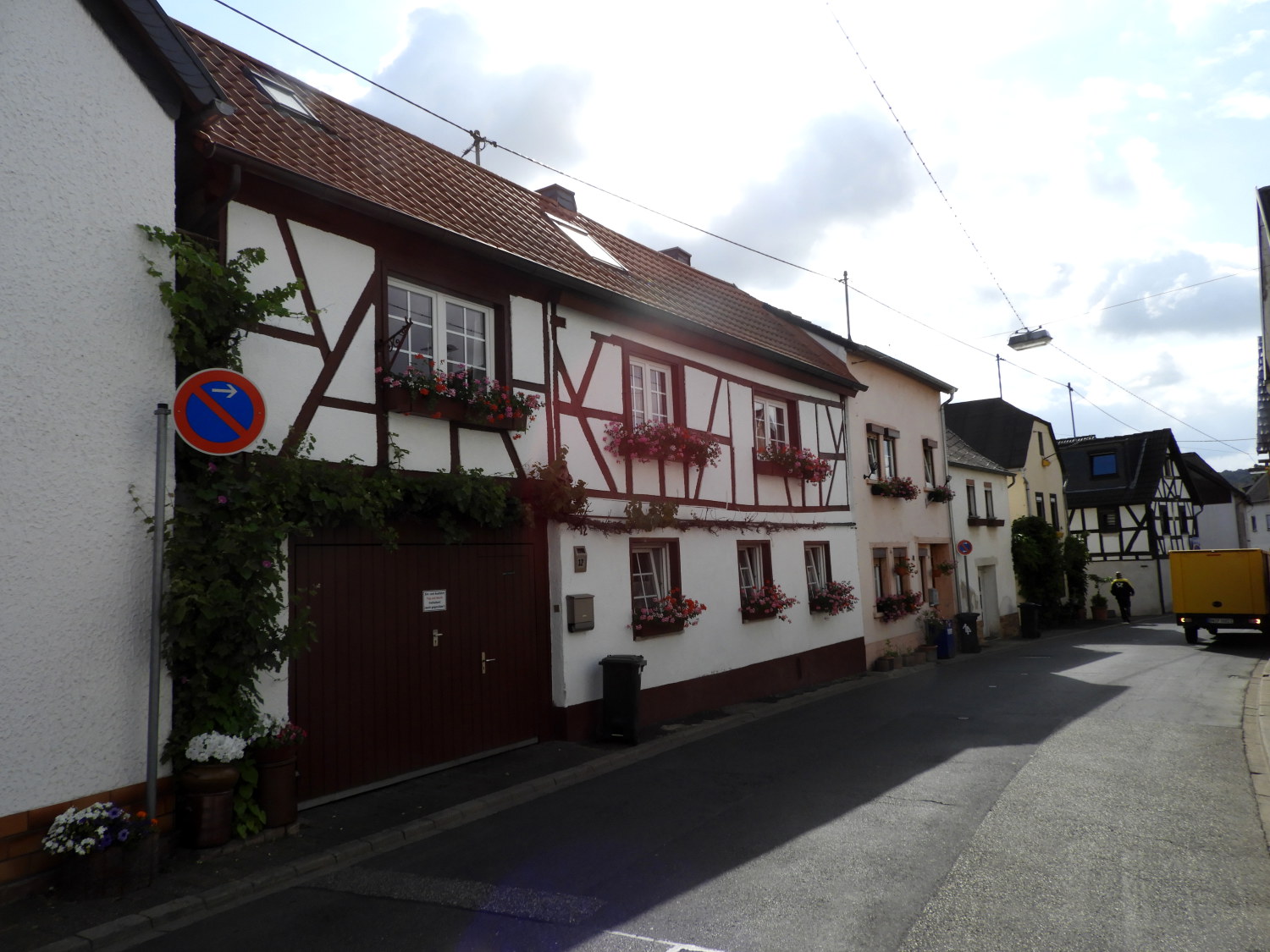 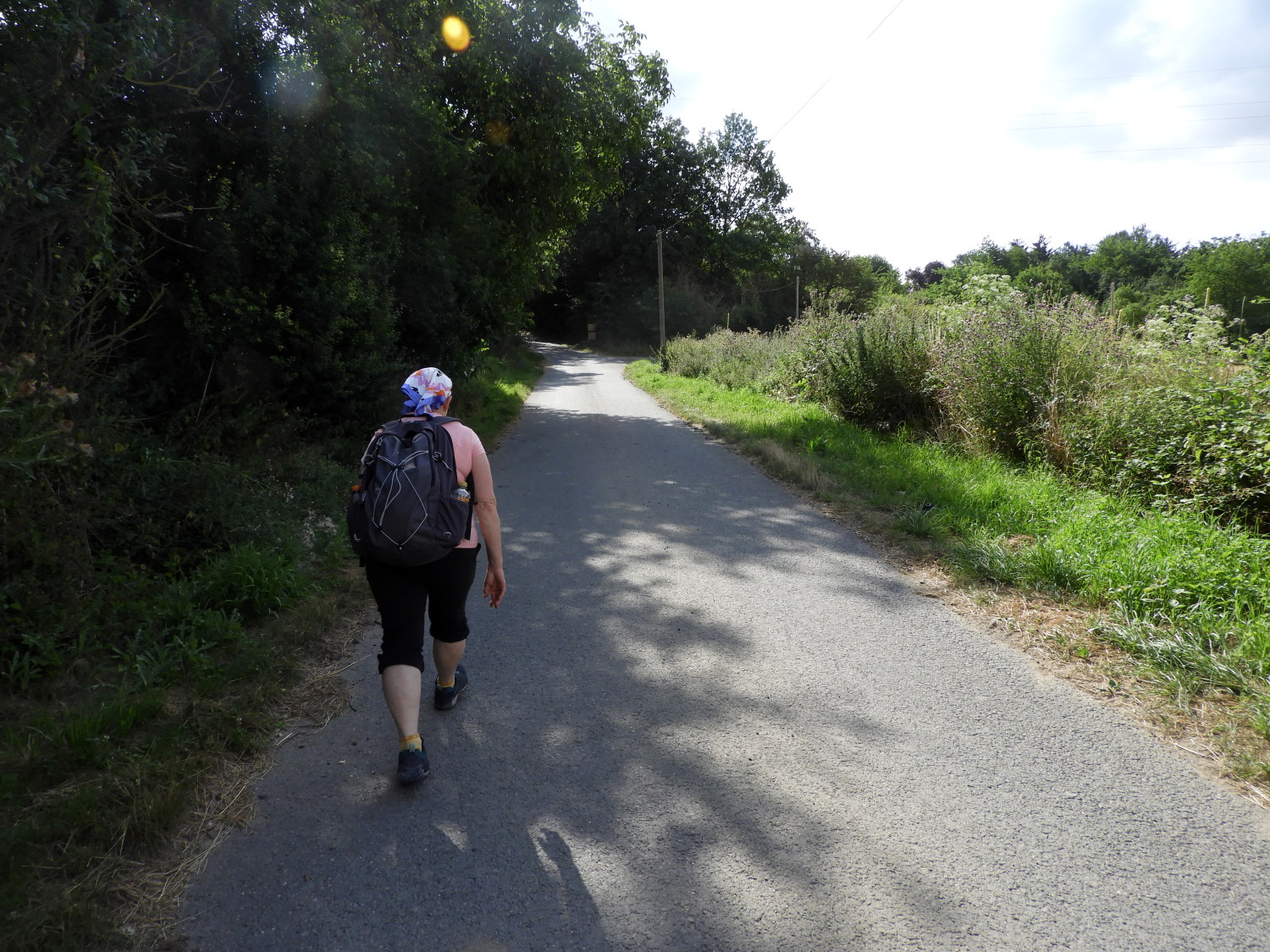 This stage of the Rheinburgenweg was unusual from the start. First of all, there was not a climb to start with; indeed no significant climbing at all, and secondly the route, for the first time, took us quite a distance away from the Rhine and into the German countryside south of the river. Lil and I began our day at 6.30am, catching the 7.10am train from Namedy to Andernach and walking from the town centre, where we had finished yesterday, at around a quarter past seven. Just as the town was waking up and with the first pedestrian commuters appearing on the streets. Of course we left them as we strode out of town, heading south along St Thomaser-Holh, crossing over the main B9 road, and continuing along through the posh car showrooms and businesses of the Krawerweg industrial estate to rejoin the Rhine Castles Trail just before arriving in the pretty village of Miesenheim. From there we easily climbed the slight slope of the farmland access road leading east from the village towards the neighbouring village of Kettig but in reality leading to nowhere. At a point where the tarmac road turned to dust we stopped on a bench near a Bildstöcke. These are little roadside shrines that are scattered throughout the German countryside alongside footpaths and highways and we were passing quite a few on the trail. Some, like this one, had a well maintained bench to sit by the shrine. Some even had tables too. It was not the last we would stop at for a rest. 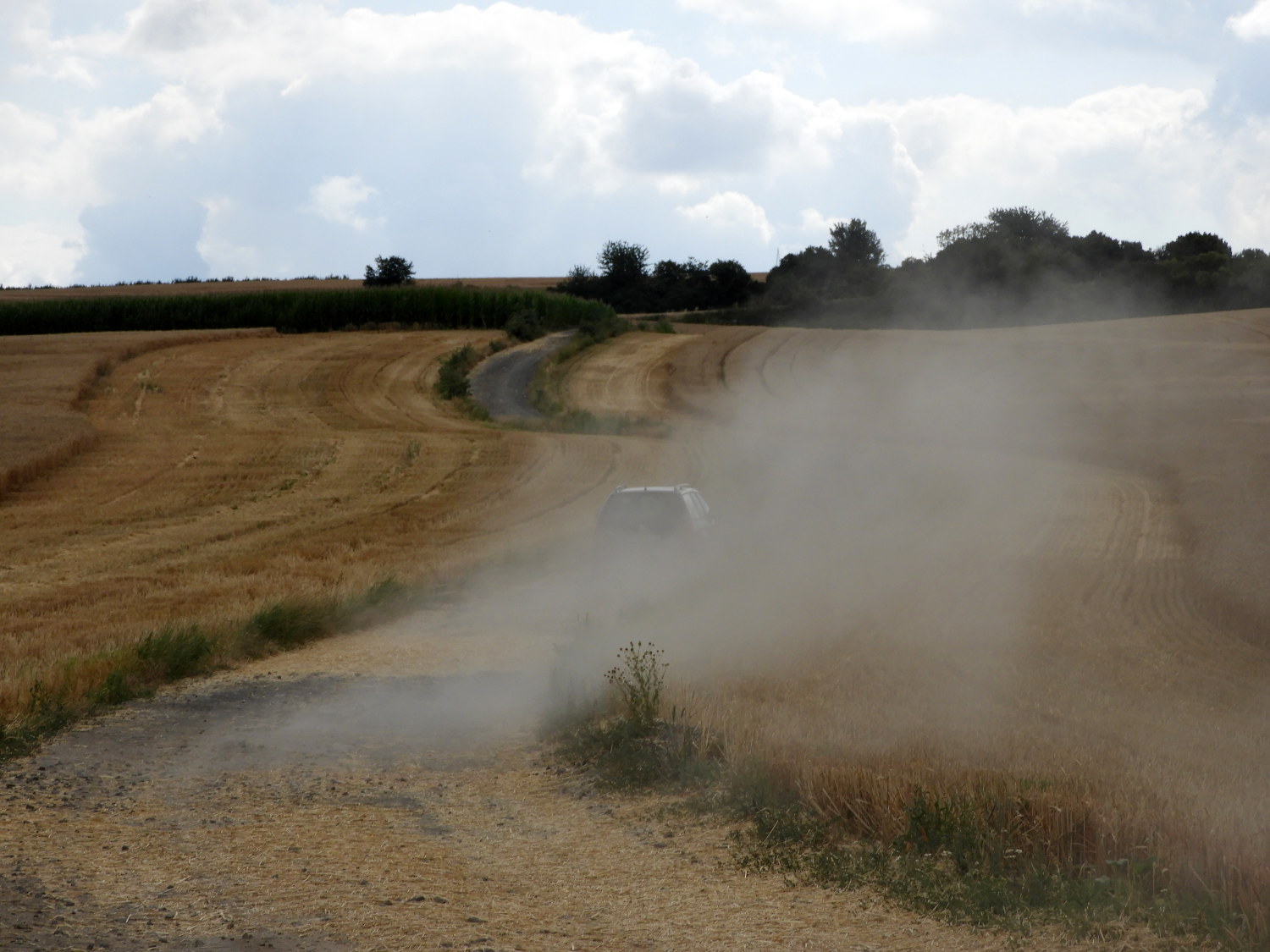 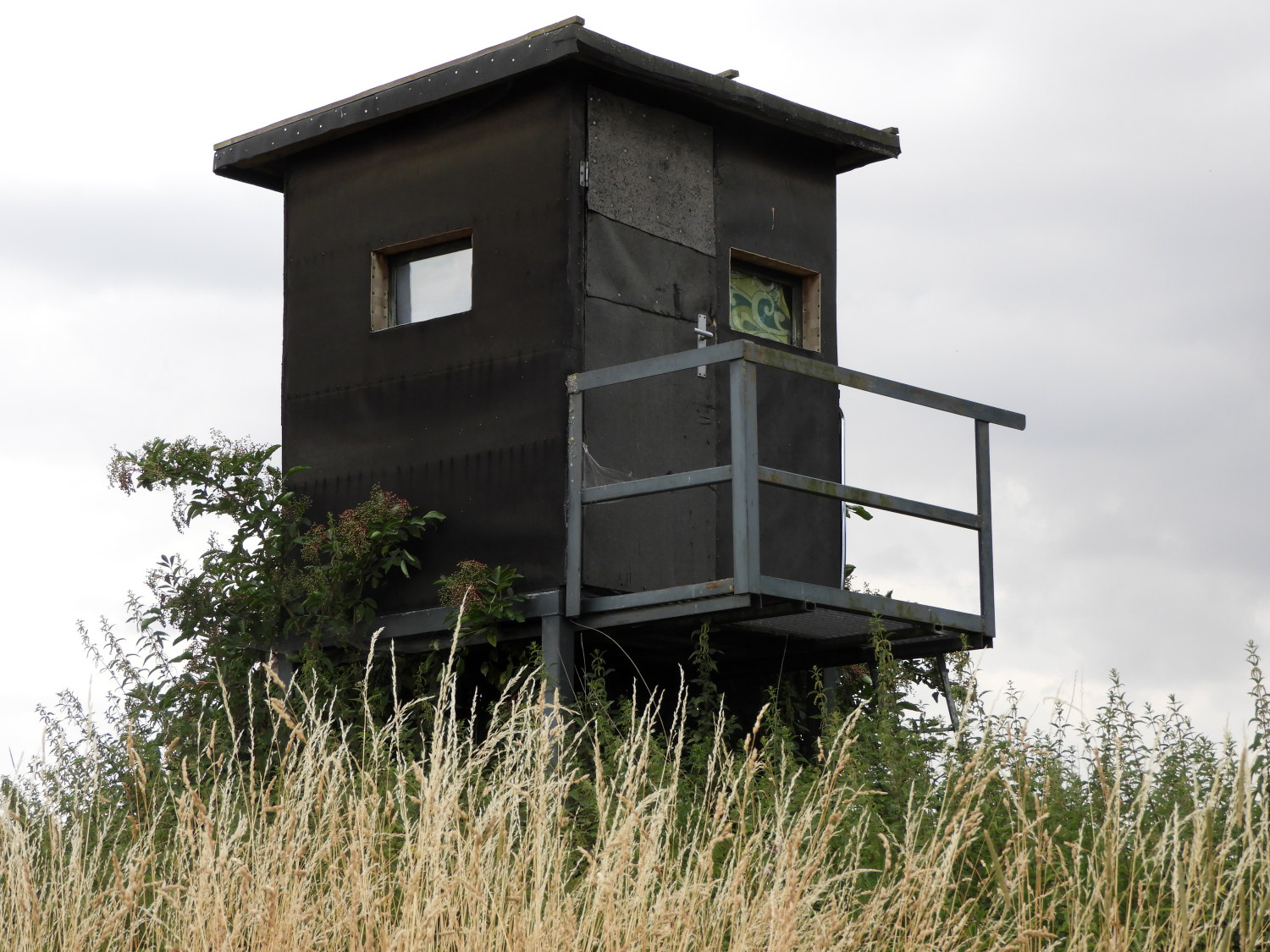 Observation Hide in the fields of Kettiger Berg

It was later than usual, already 9.30am, when we left the Bildstöcke and resumed the walk, continuing our very gradual climb to the high point of this stage at Kettiger Berg. Lil and I were now walking in heavy farming country, all the fields golden brown with wheat, barley and other cereal crops. As far as the eye could see. When walking along the Rheinburgenweg by way of one of the access roads a vehicle drove past, whipping up a local dust storm as it travelled along. We had to stop for a while and cover our faces until the dust settled. Continuing on we passed a stationary and unattended Claus Combine Harvester belonging to Schmitz of Miesenheim. Ready for action when the time comes. Then, as we reached the high land of the stage, at 250 metres altitude, the regularity of Bildstöcke stations was replaced by trackers and hunters observation hides. Another feature of rural Germany that we would get used to seeing on the walk. These raised wooden huts with windows on all four sides are for observing wildlife and culling if necessary. 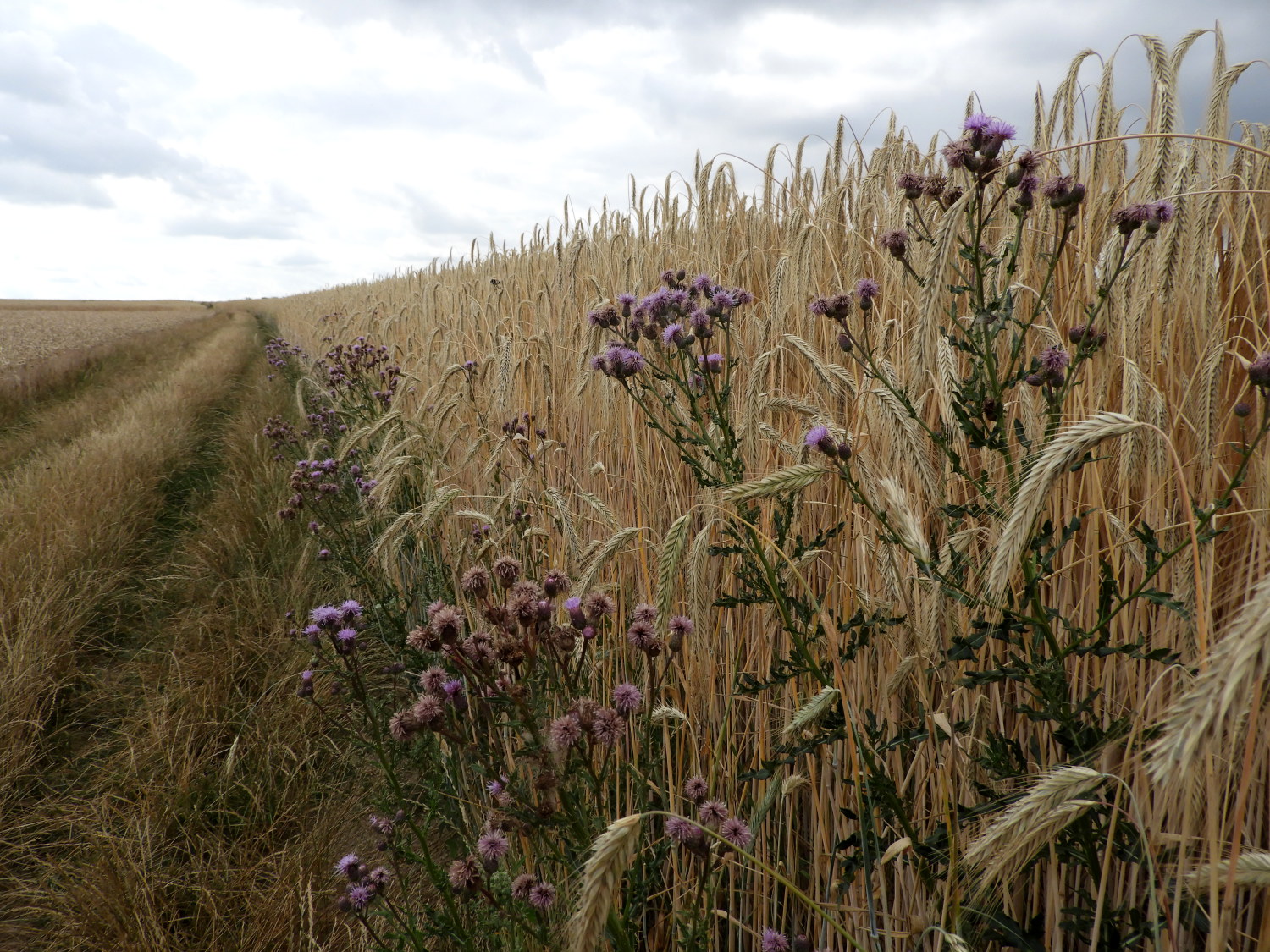 In the land of cereal fields 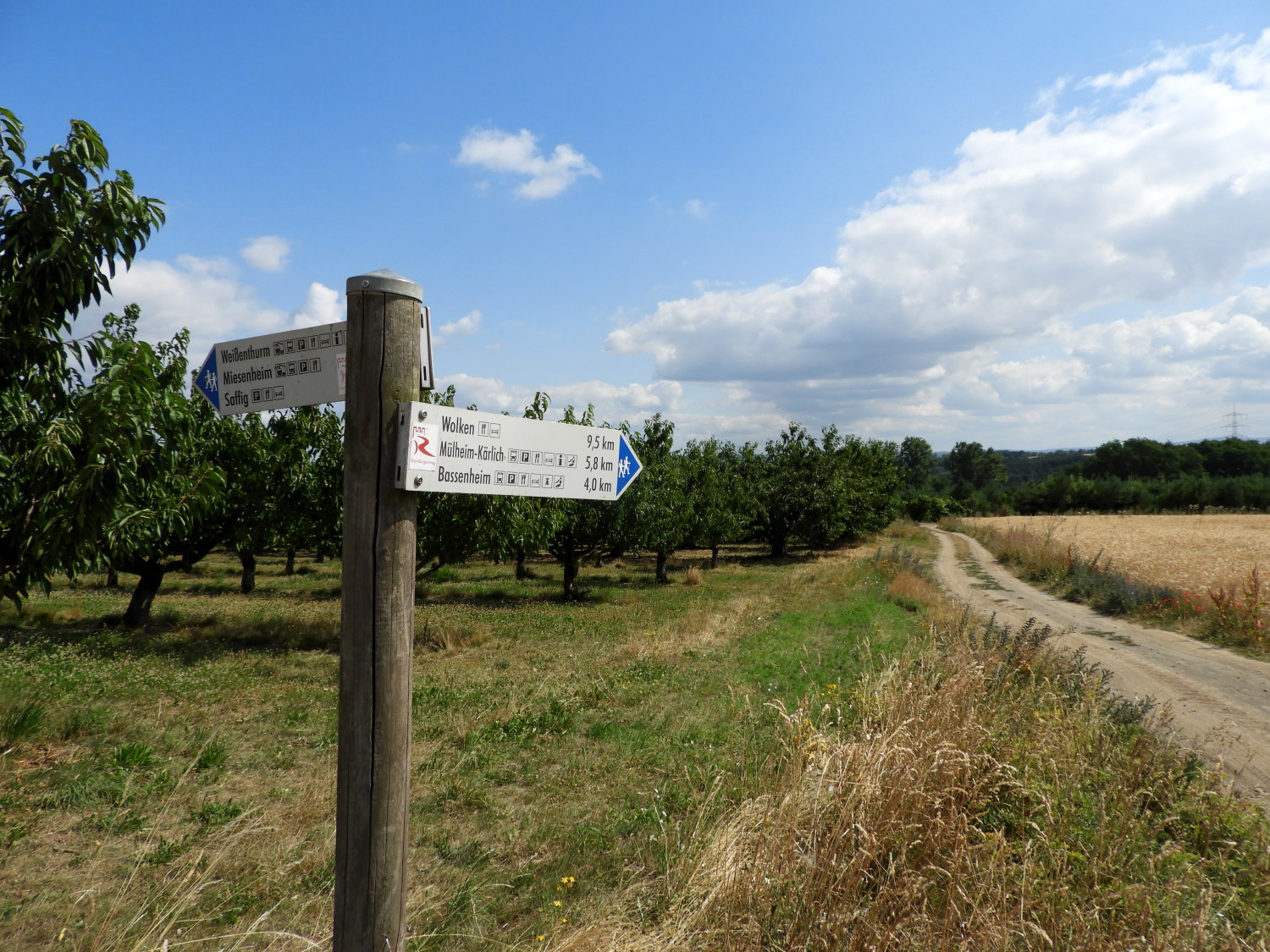 It was around mid morning as we crossed the Kettiger Berg establishment of cereal crops, the only noise around being the hum of insects in the grasses and on one occasion the hum of a light aircraft flying directly over head. For the fourth day running the sun did not fully appear until late morning but now it had it was as before. It was hot. Head coverings were donned by both of us to shield us from the full effect of the suns rays, beaming down and ripening the grain all around us. It was doing a very good job to ripen the fruit of the cherry and plum orchards we reached on the east side of Kettiger Berg. I tasted a couple of plums. They were tasty, already sweetening on the tree in July and well in advance of the plum trees at home. 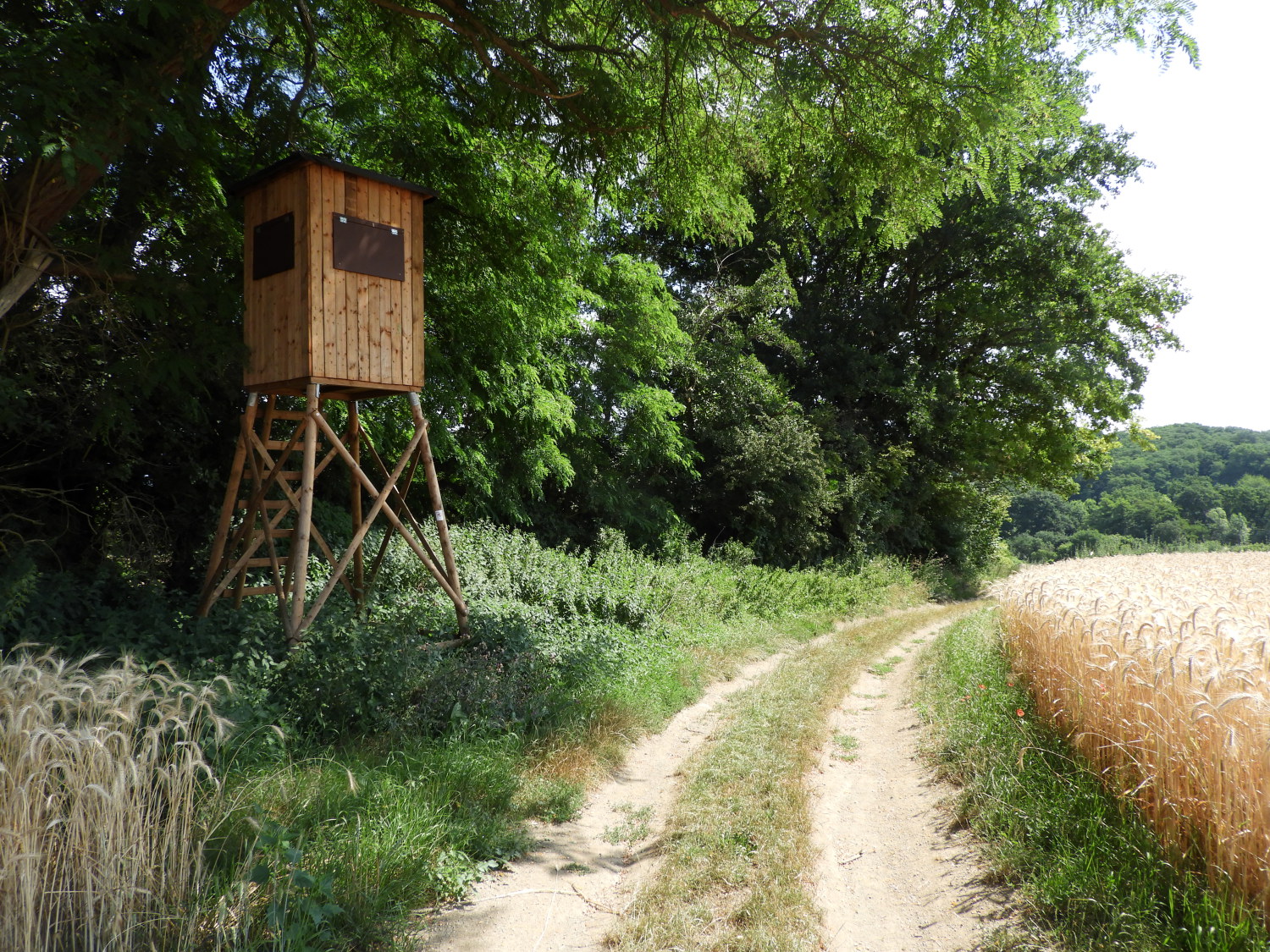 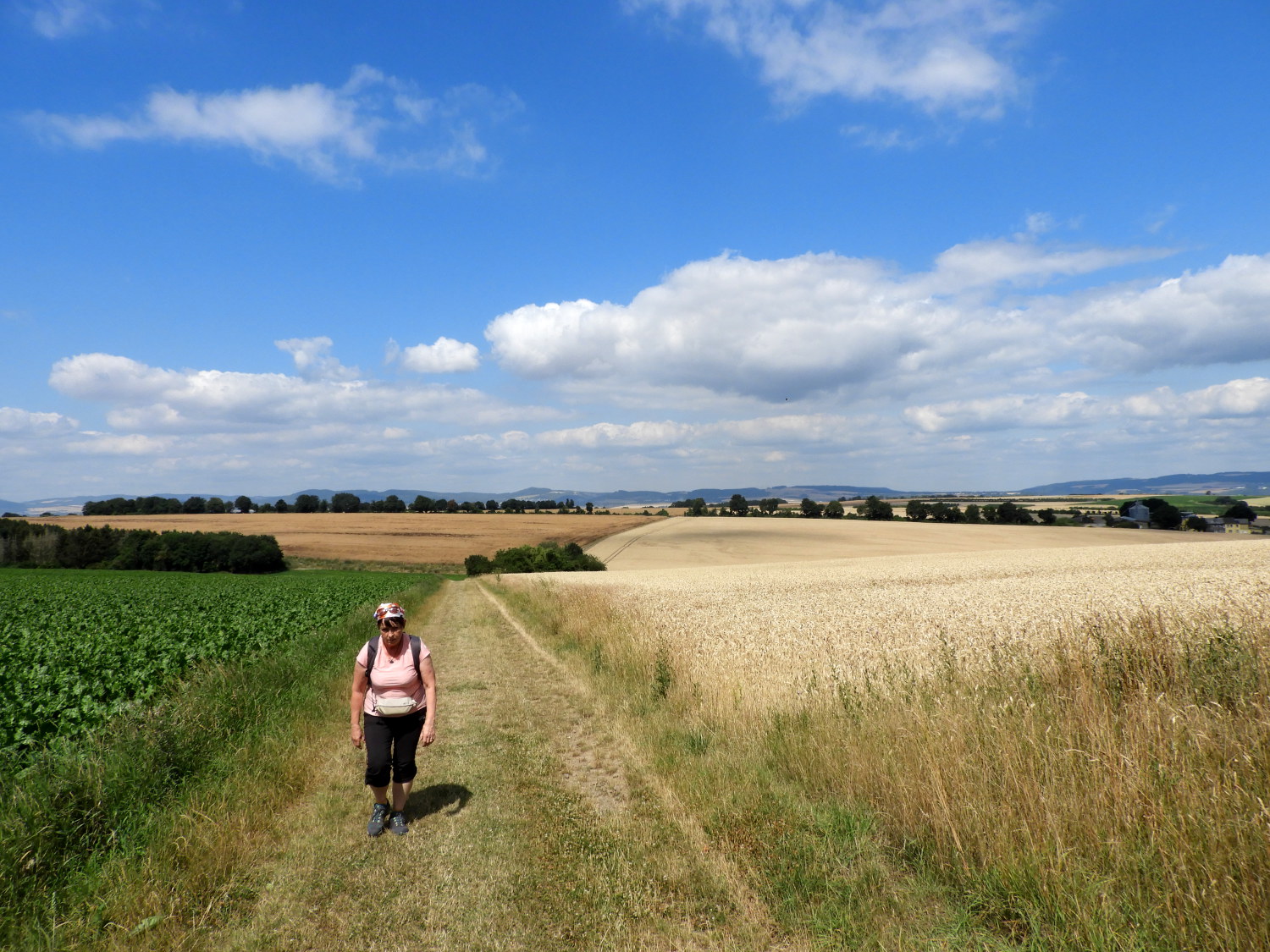 Another stretch of arable field walking

From the orchards we followed more open track beside fields, some of them huge. Which to be honest are the most demoralising on a long distance walk because there is nothing to distract the eye from that little spot in the far distance at the other side of the field in which you have to aim for. Imagine crossing a huge Canadian Prairie when you can see the finish from ten miles away and knowing there is nothing but sameness within your eyesight either side of you and ahead of you too. A grim thought. Luckily on this occasion we had only a mile of it between Kettiger Berg and the large farm at Pfaffenbrucherhof with its three huge grain silos dwarfing the farmhouse and outbuildings. 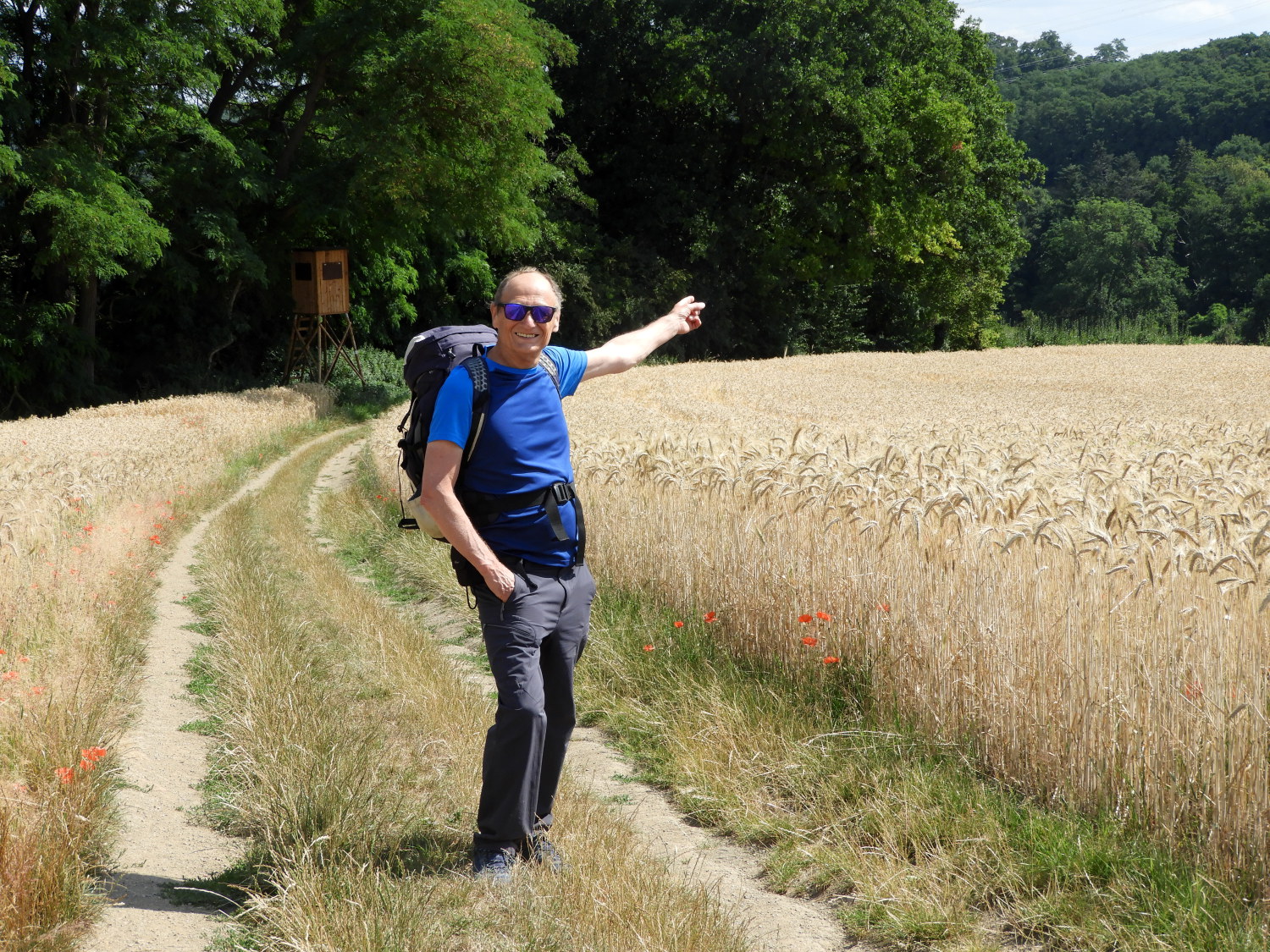 Pointing the way from Pfaffenbrucherhof 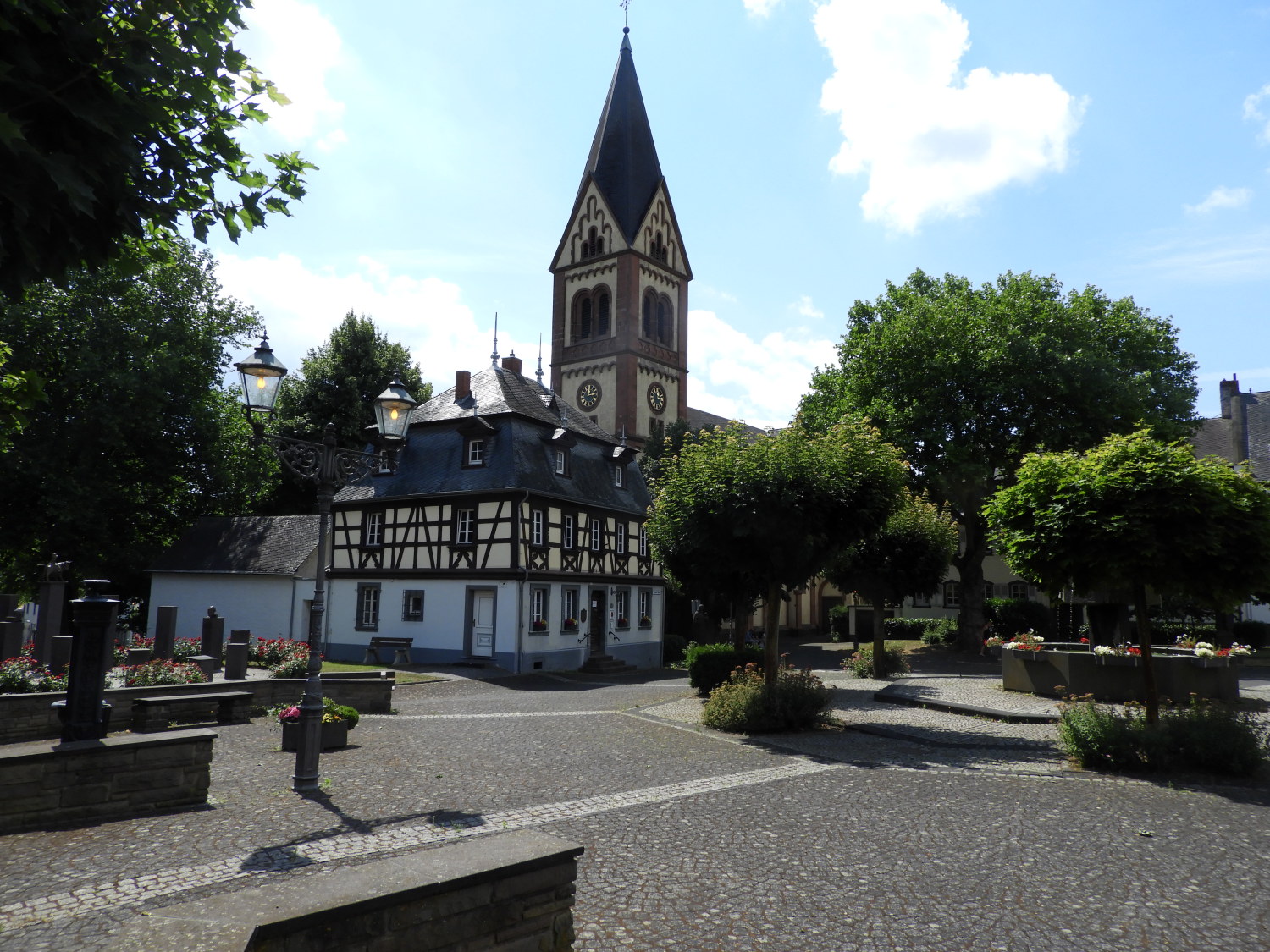 Once past Pfaffenbrucherhof we had just a couple of kilometres walking to reach our destination of Bassenheim. Which we did by way of crossing an access road bridge over the European route E31 highway. Gently strolling in to the finish I chatted with Lil about the options for the rest of the day. The original plan was to finish here, get a taxi to our accommodation in Winningen before being returned to here and walk to Winningen tomorrow. As we stepped into the very pretty square at Bassenheim, at just 11.15am I asked Lil "How do you feel? How about lunch here and then carrying on with tomorrow's stage this afternoon?". She replied "I am good, let's do it. It makes more sense to me and I am still good to walk further today. What would we do this afternoon otherwise?". I was so pleased she had elected to keep going and I was even more pleased, in an impressive way, at how Lil had taken to the long distance walking. Okay, only four days in but it was not getting her down. in fact she was loving the adventure. Yes, there would be temporary downers to come for her, but on the whole this was a brilliant effort. We had lunch in Bassenheim. And then we carried on with the walk to Winningen; stepping away from Bassenheim on stage five. One day ahead of schedule.