The Walk: At just over six miles, today's stage was the shortest of our Rheinburgenweg. This was because I could not find any accommodation at all in the Sankt Goar area of the Rhine valley. The only place I could find to stay on this particular day which was still available on the route of our walk was a room in a house in the upper Rhine village of Holzfeld. (Please note: I found accommodation on the Rheinburgenweg much easier to find in the north, from the start of the walk, than to the south towards the end. However, on only one occasion, which I will come to in a few days, did I not succeed to find a place to stay on or near to the route itself). 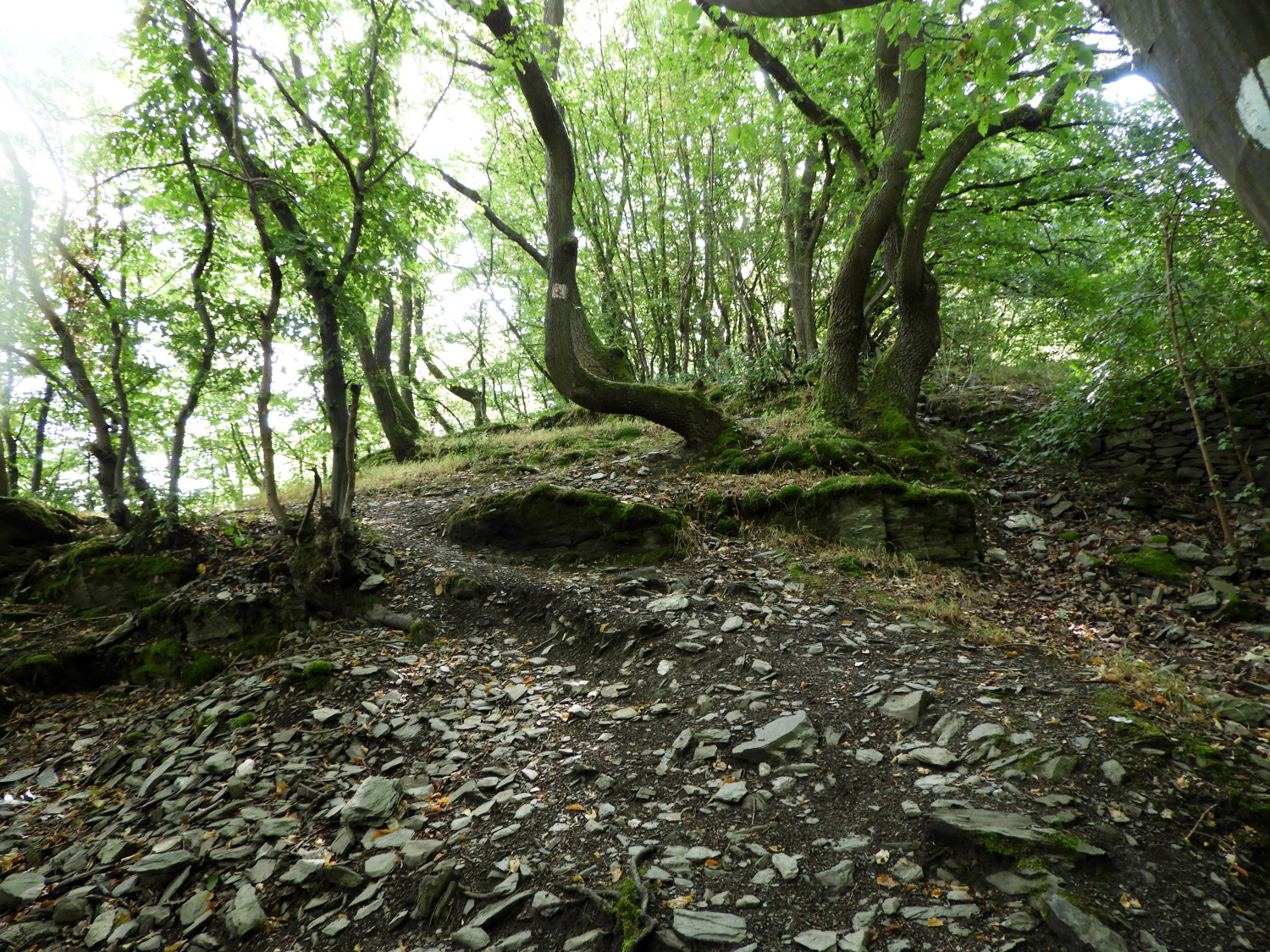 The climb from Bad Salzig 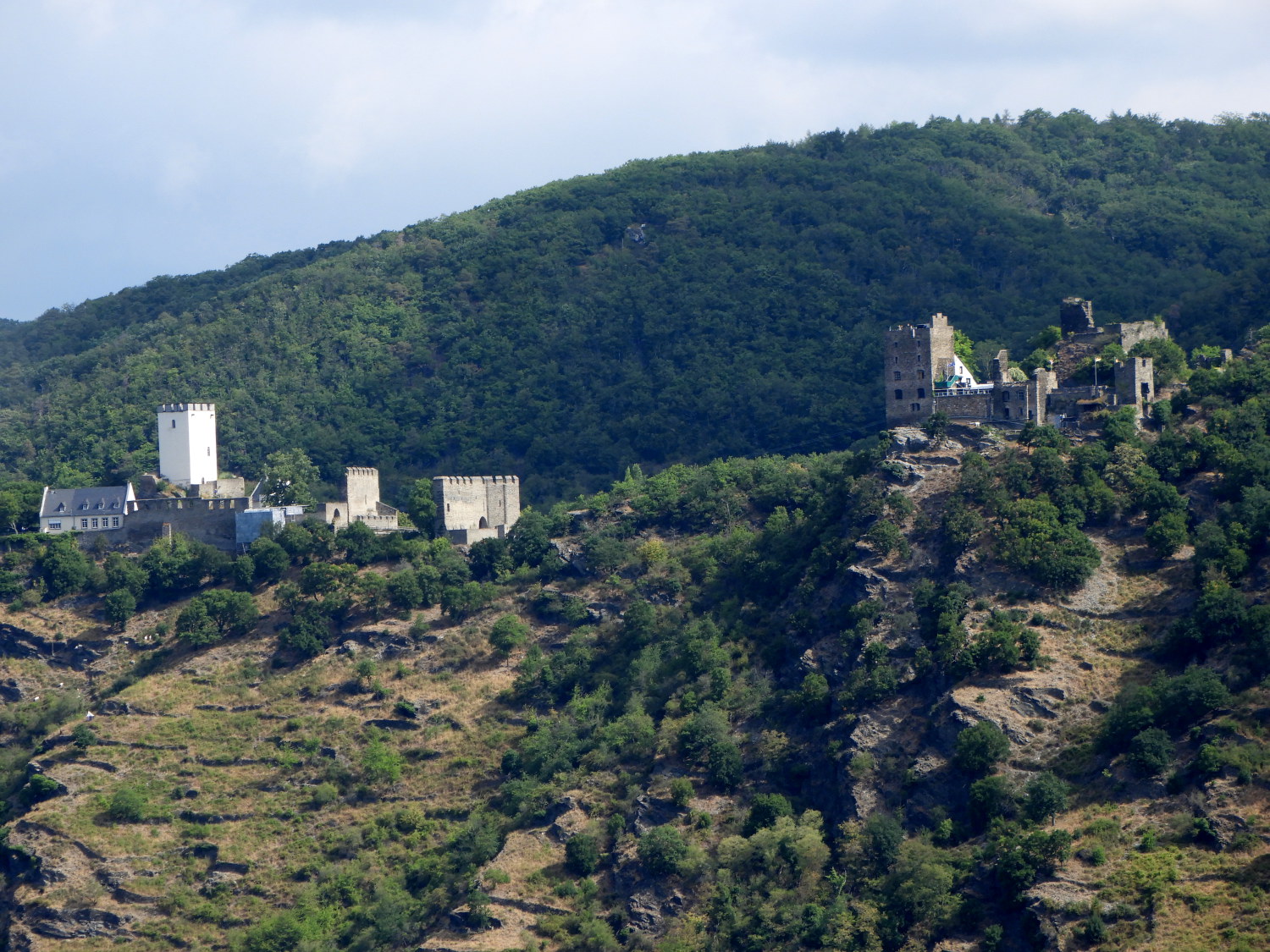 Another gorgeous day on the Rhine Castles Trail was guaranteed, the sun already rising high into the now familiar blue sky as we commuted by train from Boppard to Bad Salzig to resume our walk from exactly the same spot we finished yesterday, near to the animal farm on Salzbornstraße. From there we walked into a woodland of gnarled ash, oak and lime trees, rising to a viewpoint which gave us a breathtaking views of the Hostile Brothers castles on a hilltop overlooking the Rhine and Bad Salzig. Castle Sterrenberg and Castle Liebenstein, side by side and separated only by a stone wall are prominent features of local German folklore. Fought over by family feud and supposedly haunted, it is hard to define fact from fiction. What is a fact though is the glorious view of them from this high viewpoint just a short distance south of Bad Salzig. 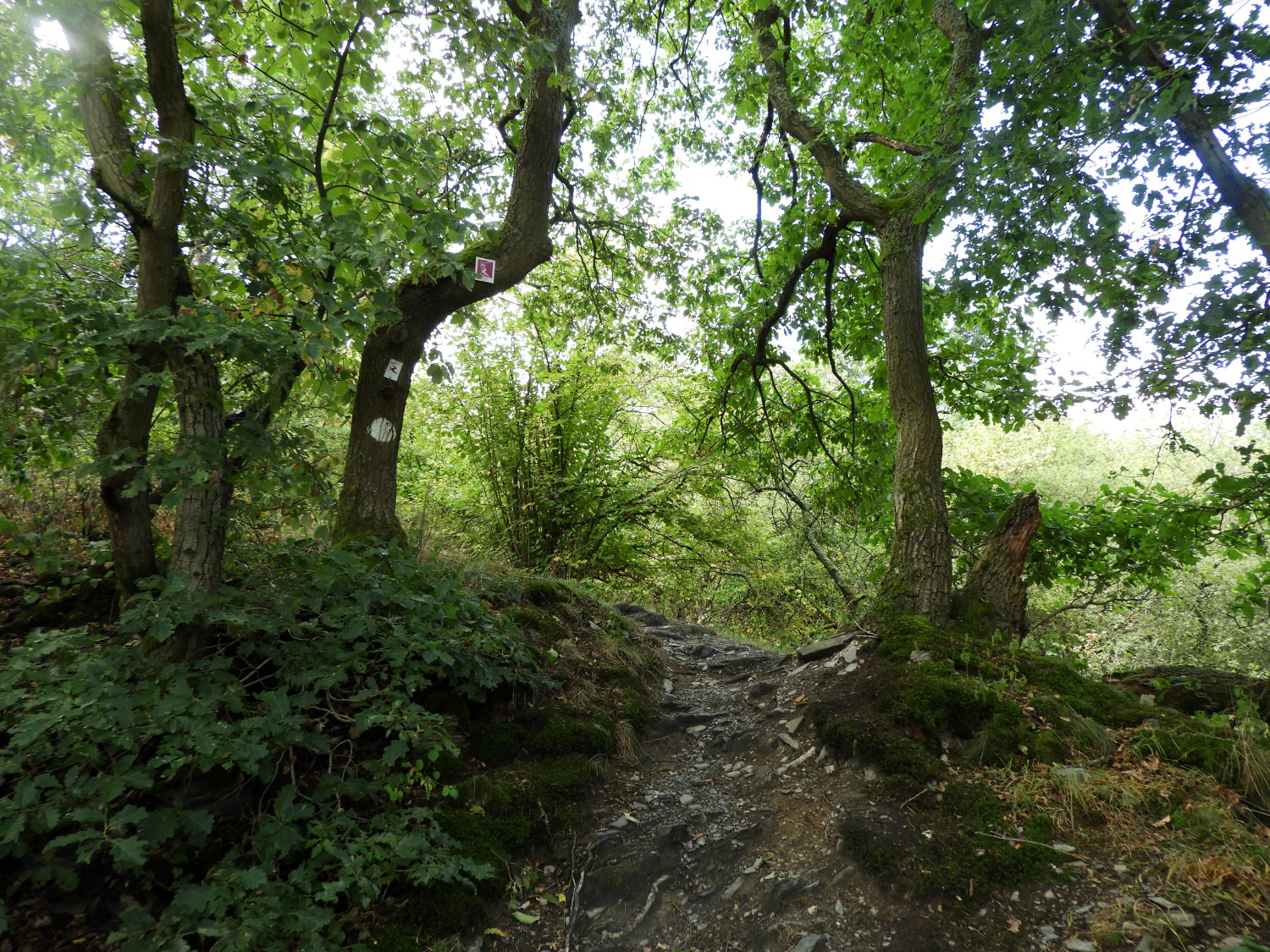 The climbing path to Taunusblick 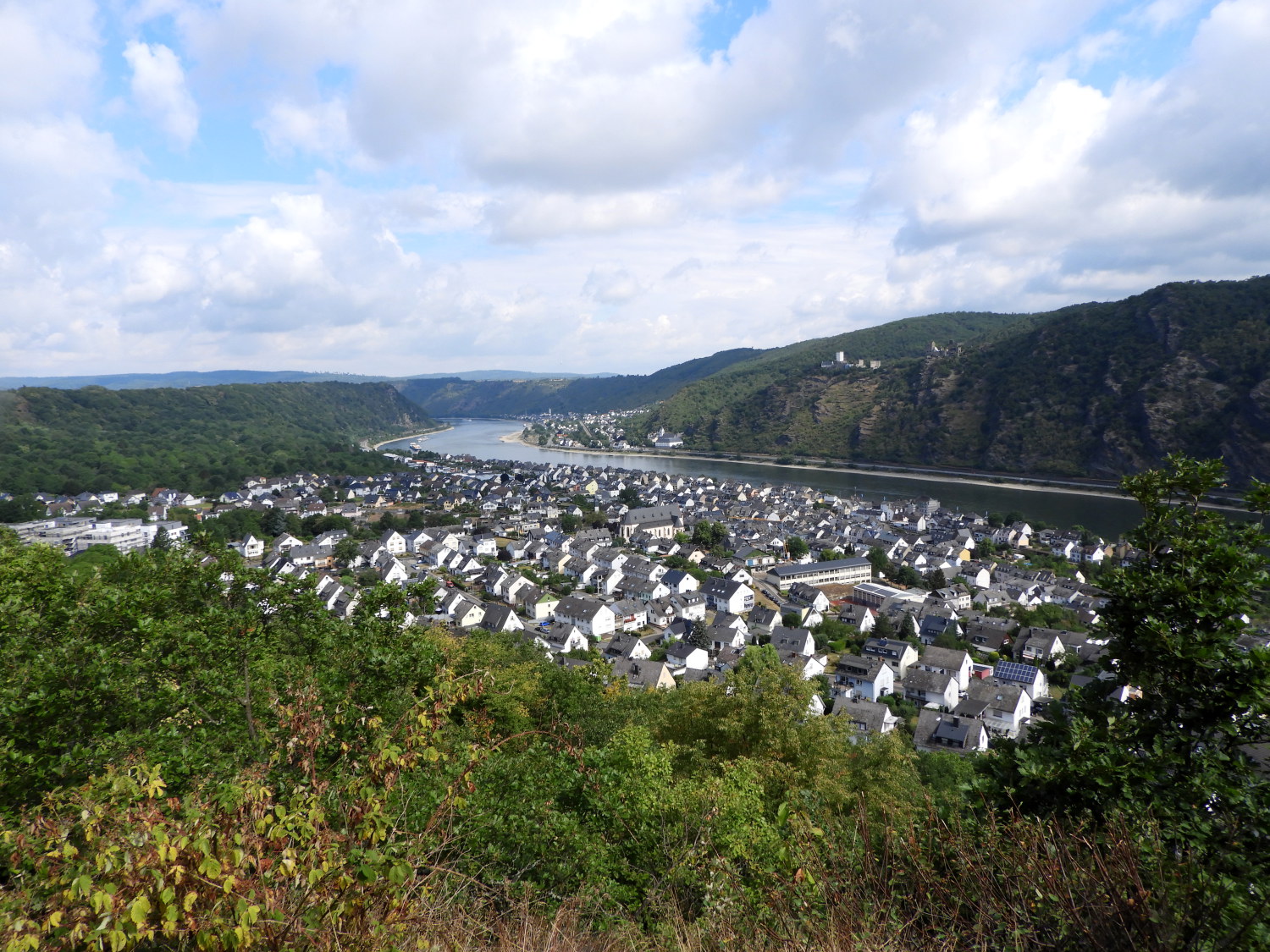 View of Bad Salzig from the viewpoint at Taunusblick

There were a series of revealing viewpoints along the woodland path from Bad Salzig, four in fact, the first being Koppchen where we had stopped for that earlier view of the Hostile Brothers castles and the final one being Taunusblick. The middle two viewpoint stations are unnamed on the map. At Taunusblick, Bad Salzig showed all the buildings to be whitewashed. Ninety nine percent of them were brilliant white with the remaining one percent either a light yellow or very pale green, so pale they did not stand out. I guess they were not allowed to. All rooftops were a light shade of grey. Beyond Bad Salzig the view showed the Rhine curving to the right around Kamp-Bornhofen with the huge Boppard and Filsen curve just out of sight a little further downstream. 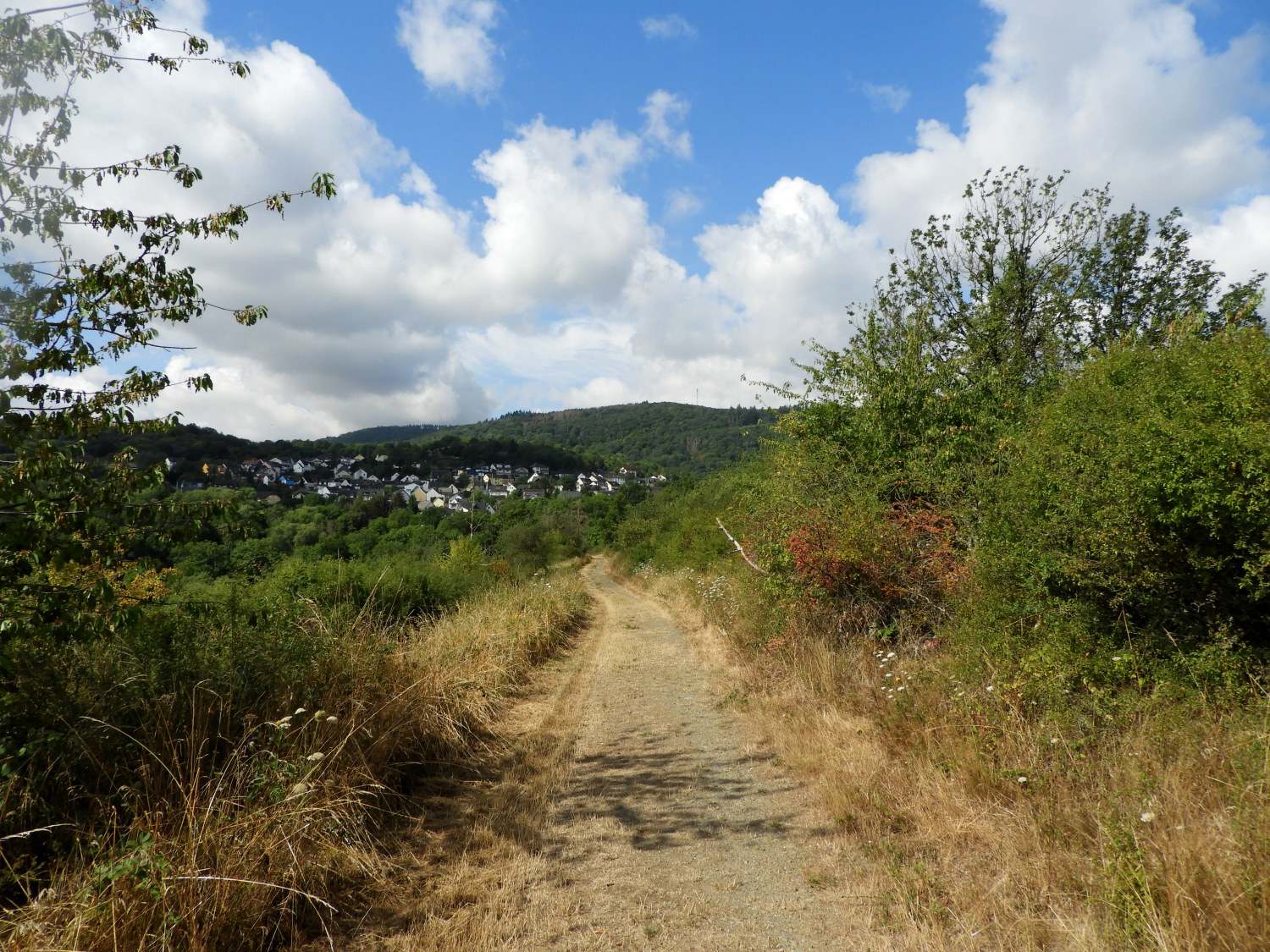 The path leading to Weiler 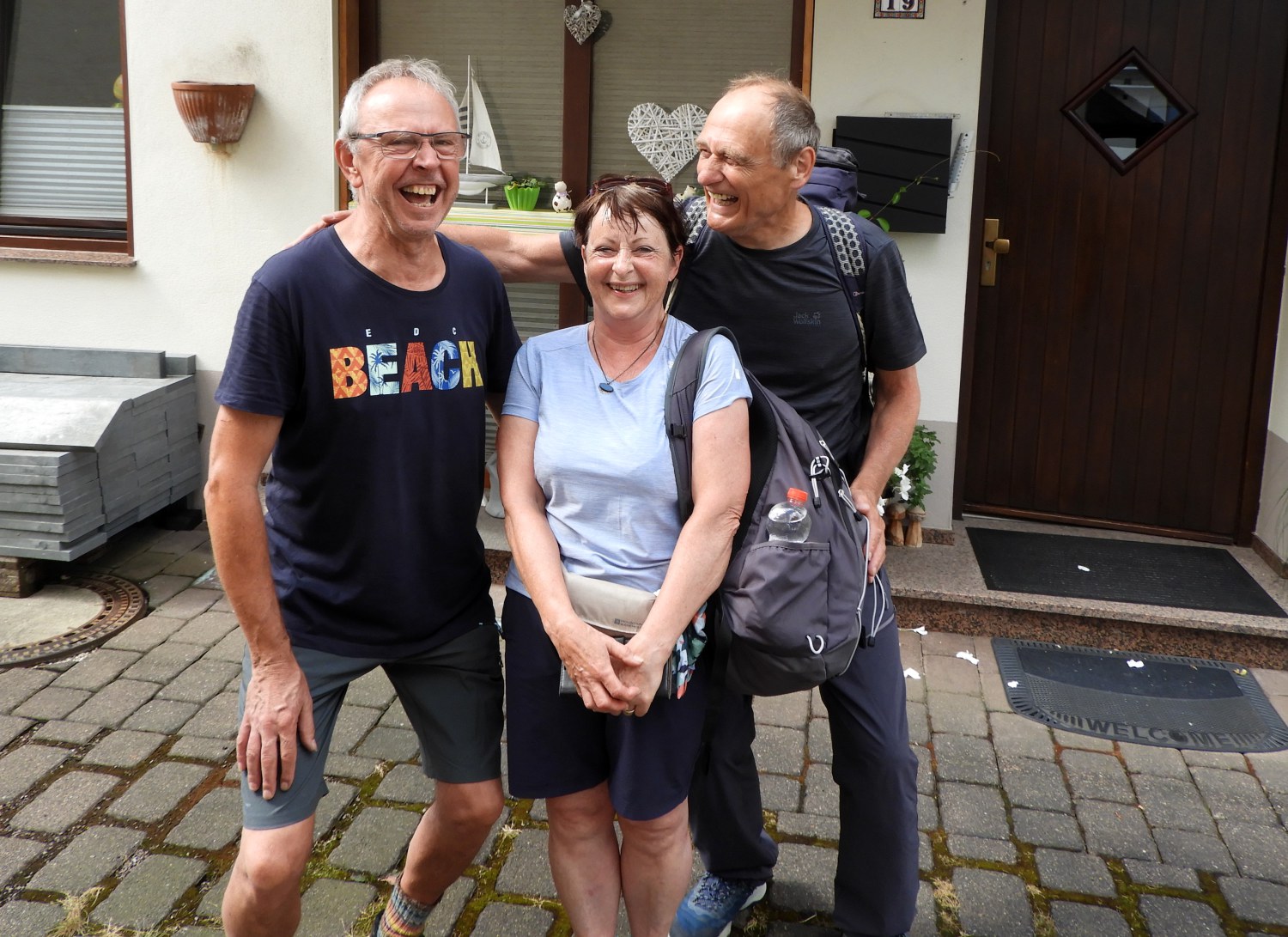 Enjoying a laugh with Eckhard Stelzer

From the Taunusblick viewpoint the Rheinburgenweg route skirts around the top of the hills on the south side of the Rhine, generally keeping a view on the river. But with time to spare on our shortest day we decided to detour into the village of Weiler in the hope of finding at best a cafe, at least a shop. A good path led us there, close to villagers in fields, some of which were occupied by camper vans. Once in Weiler, approaching the centre of the village along Im Rosenacker we could not see any sign of activity. Doubting there was a cafe or a shop here, it was at the junction of Im Rosenacker and Zur Buchley when we saw a gentleman approaching from the opposite direction. In my limited German I asked "Entschuldigung, gibt es ein Café in der Nähe". I understood his negative reply so I asked "Gibt es einen Supermarkt?". Again he told us all we needed to know. Then Lil stepped in with "Ich brauche Kaffee". To which the gentleman replied "Bitte kommen Sie auf einen Kaffee zu mir nach Hause".

The gentleman we met was Eckhard Stelzer. We accepted his kind invitation and accompanied him to his home which was just a short distance away. He spoke very little English but we got by with a combination of our limited German, smiles and gestures. Best though was that his son Christian was working at home and he helped with the interpretation. We stayed the most wonderful half hour chatting with Eckhard and Christian, very much enjoying their friendly company. Thank you both, it was a very special time meeting you on our Rhine Castles Trail (Rheinburgenweg) walk. 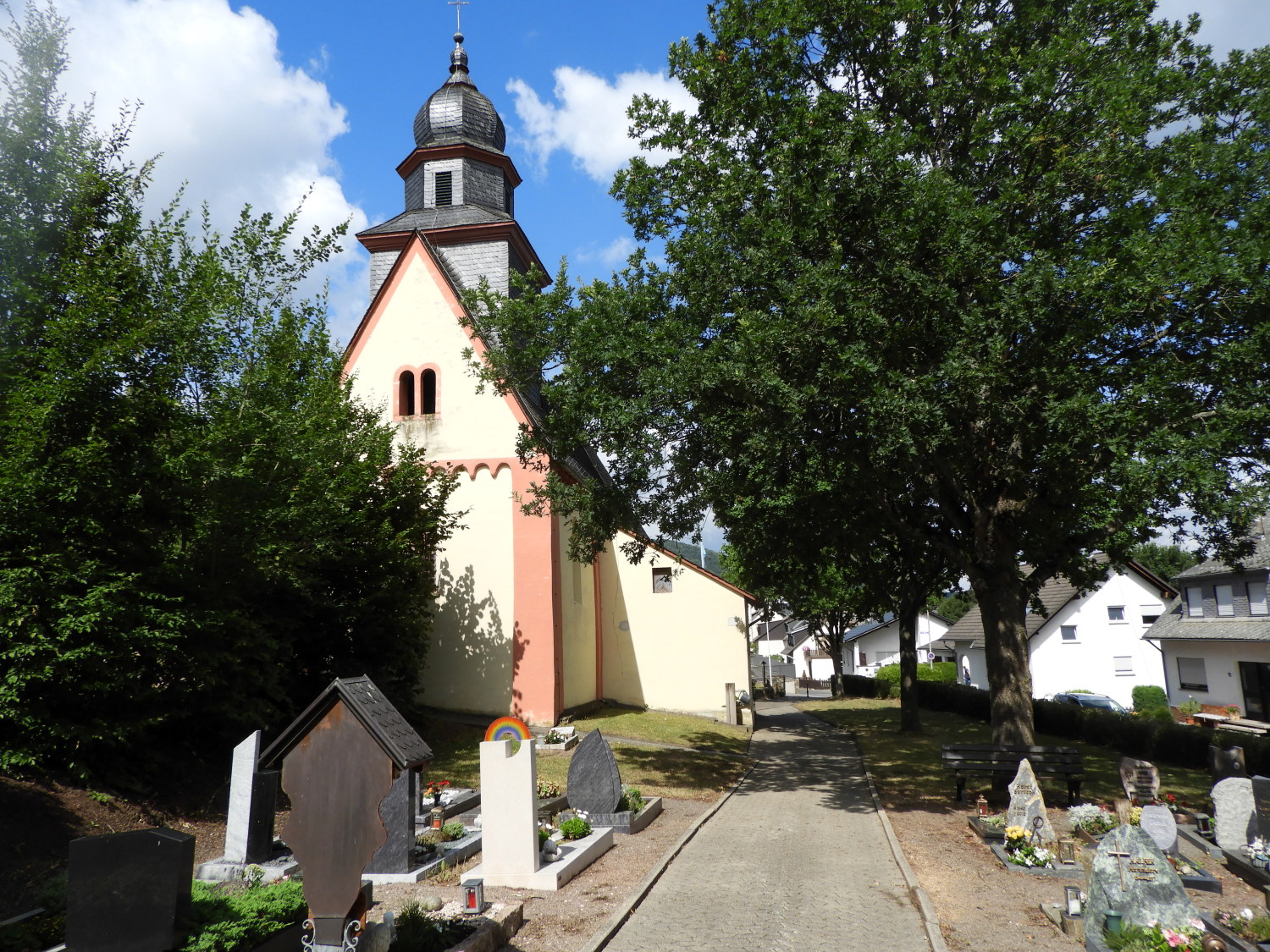 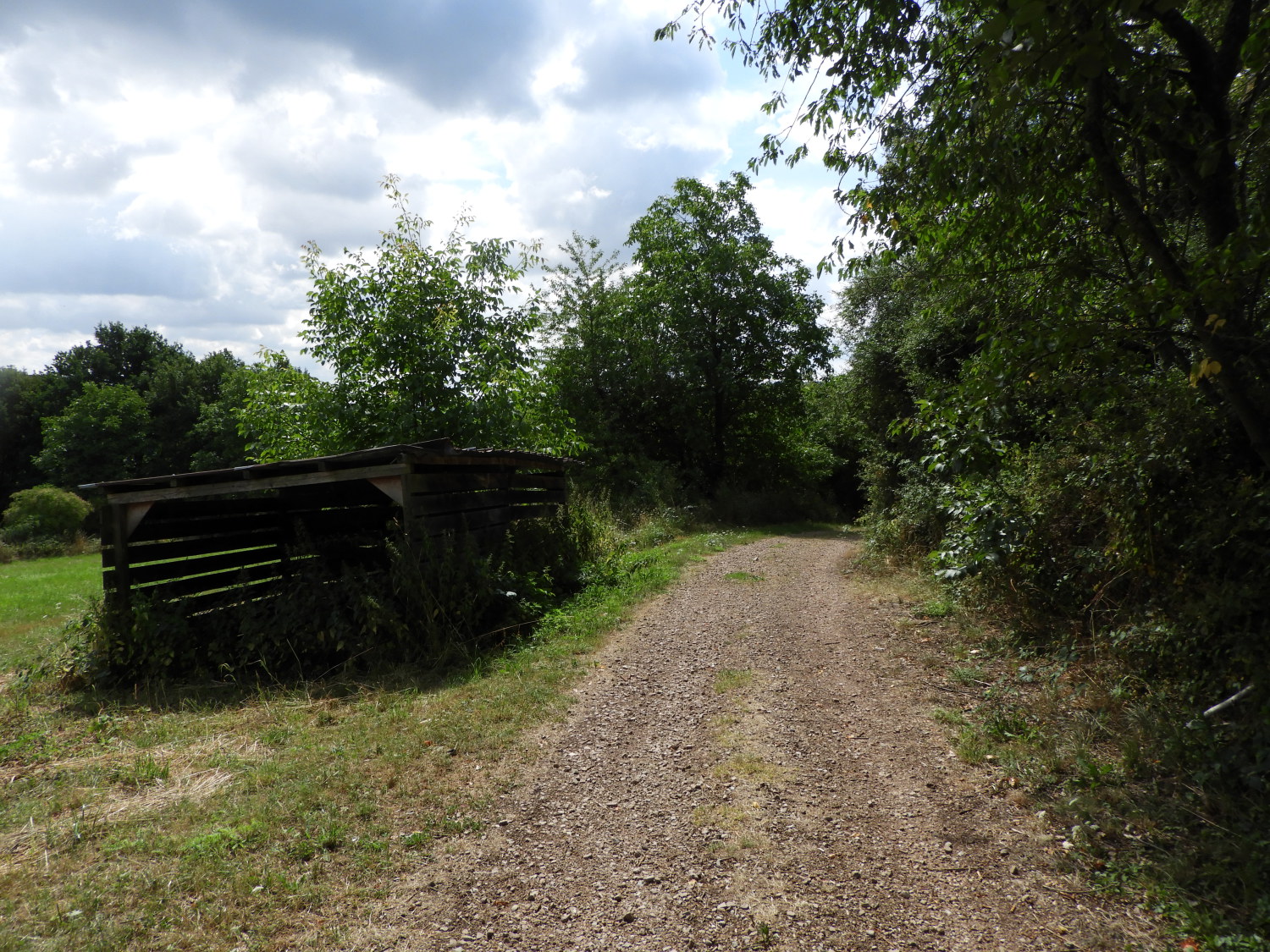 Full of smiles and heartened by the kind nature of our hosts in Weiler we left the village by following Zur Peterskirche back to the Rheinburgenweg. After passing some farm machinery and a wooden barn the path continued down through woodland to Weilerbach. On the walk down to the stream a couple of clearings afforded us views to the flow of the Rhine, getting distanced but not quite the last we would see of the river today. Near the bottom of the track, close to the stream, we saw a postbox pinned to a tree. The accompanying sign was bent and letter slot taped over so the house it served, which we could not see along the much overgrown trackway, must have been abandoned long ago. 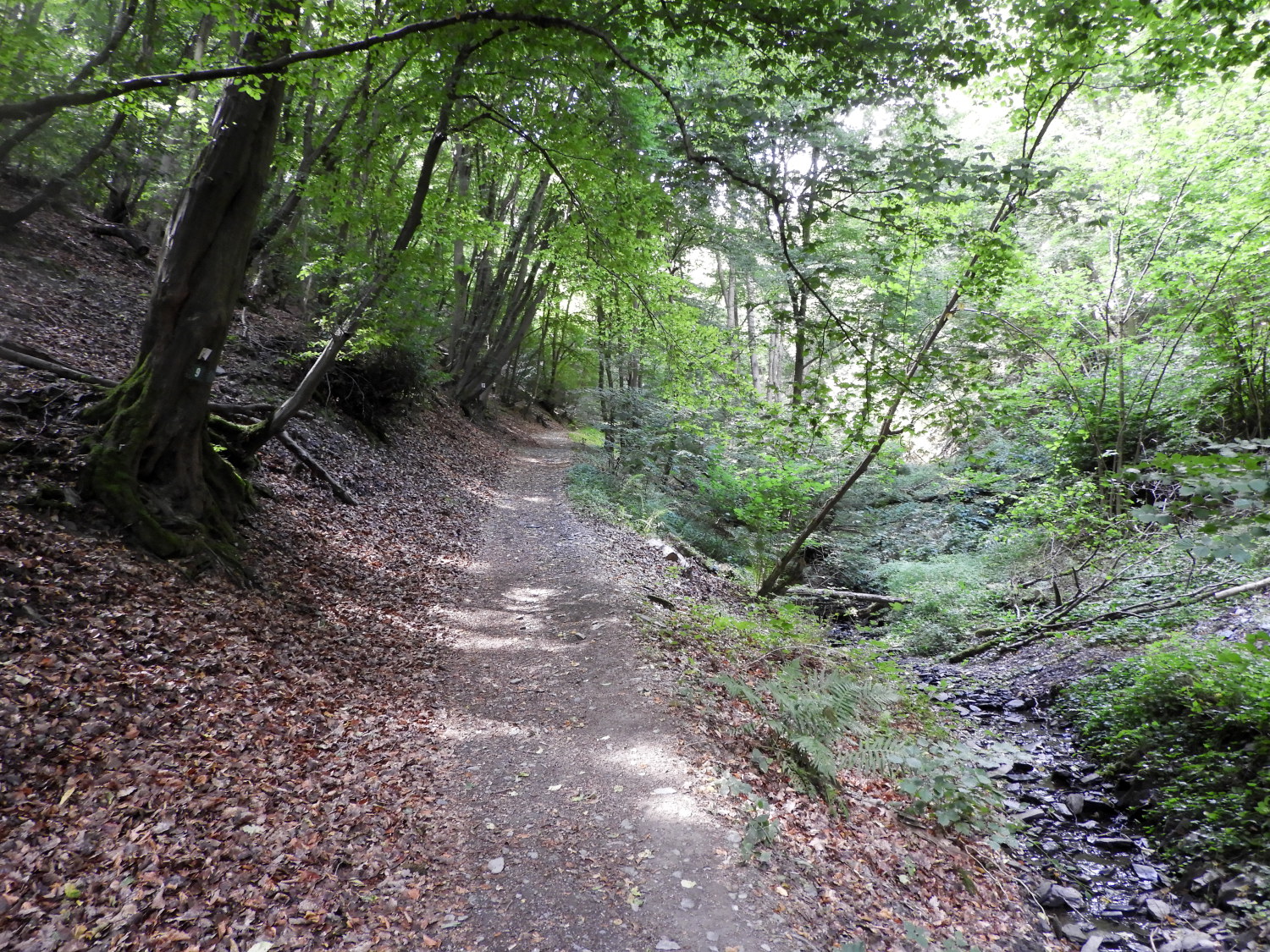 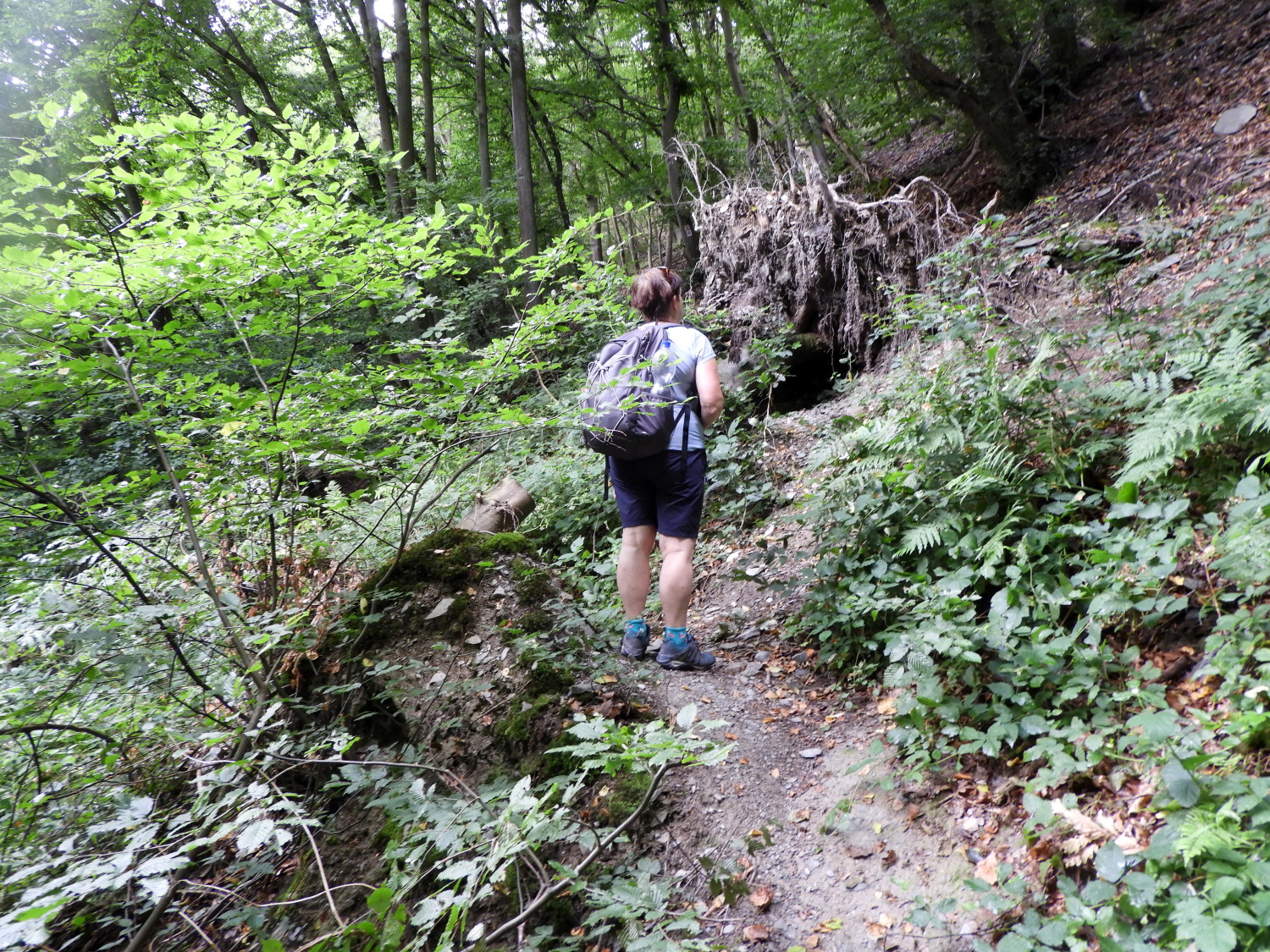 Blockage on the rising path to Hirzenach

The Weiler Bach was a mere trickle, such had been the hot dry spell we were experiencing in July, 2022. Local people we had met on the trail, including farmers and those making a living with small holdings had all said it was too dry. Which will have been in complete contrast to this time lat year when it was far too wet. With the devastation of the floods such as we saw in evidence on the Ahr Fluss to cap it all. Despite the recent seasonal travails of those working the land though, for us in the here and now, it was ideal weather. Especially in the shade of woodland on another hot day which, while still in the thirties, was not quite as attritional as the super heatwave of the last weekend. Remembering the stormy impact of last summer was never going to fade from thought on the walk though. Fallen trees, probably from last year, regularly blocked our progress. Such as the one blocking the path leading up from Weilerbach to Hirzenach. Its exposed roots were decayed and it leaf already faded to grey. 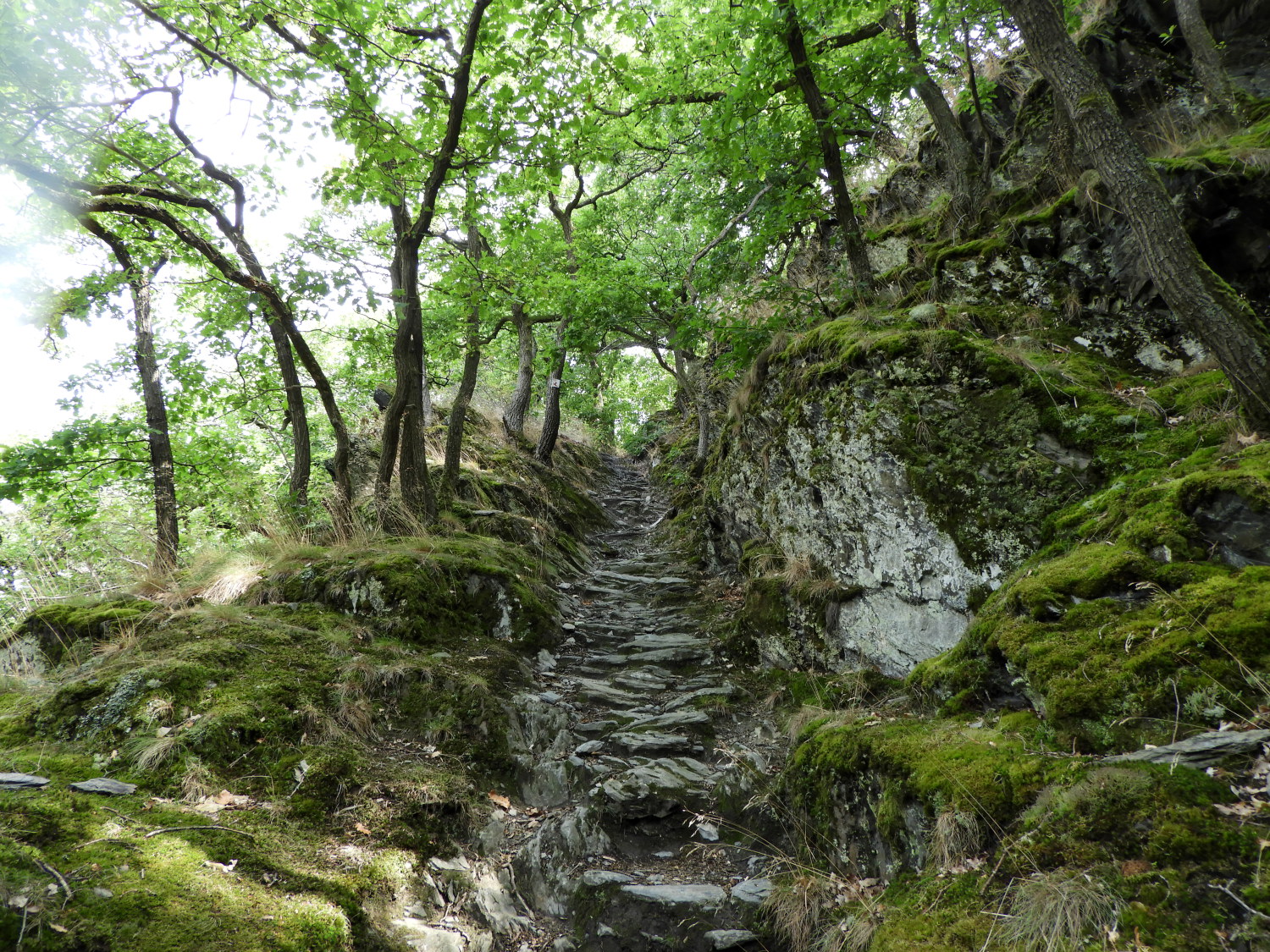 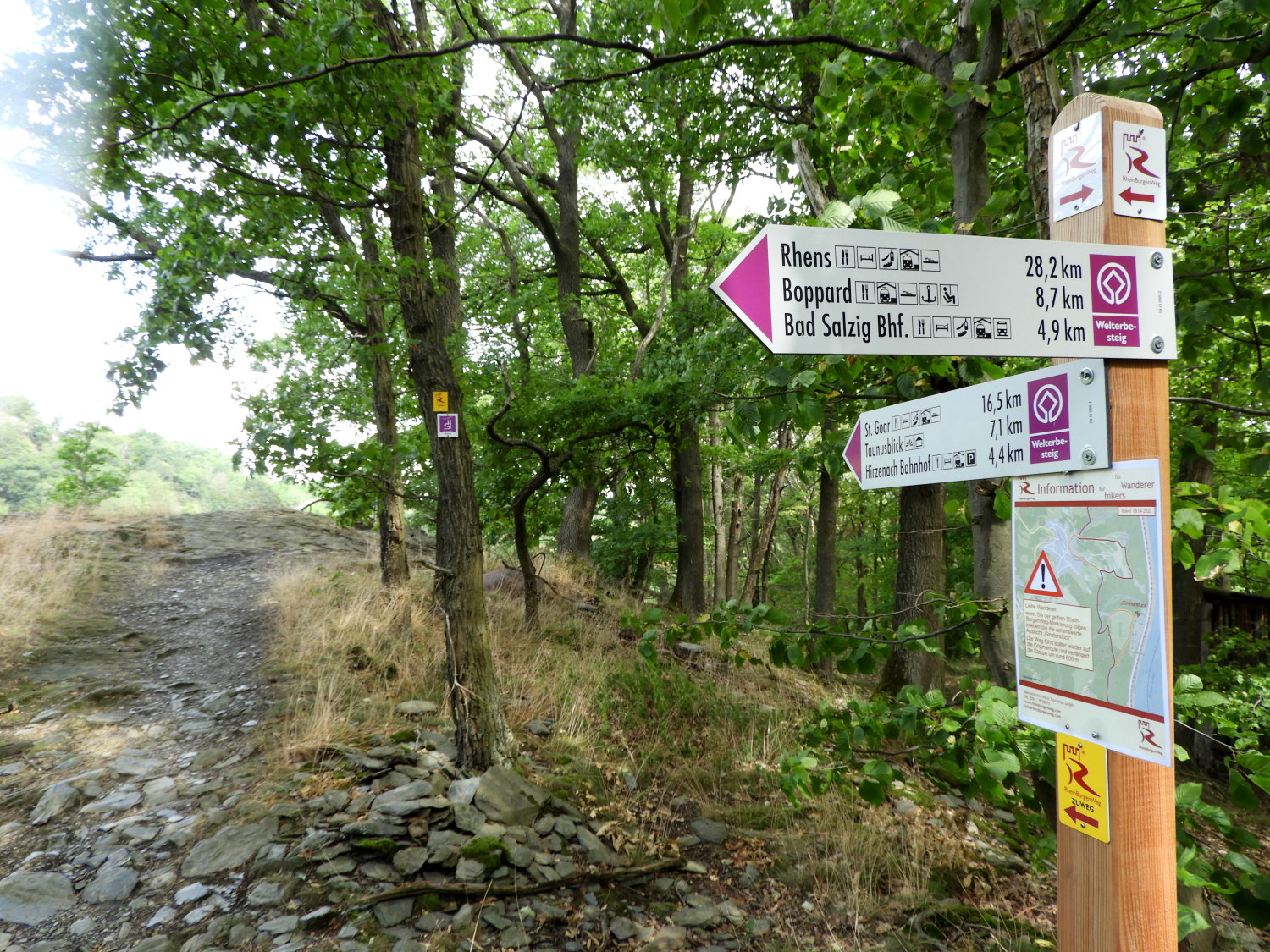 Waypost on the way to Traumschleife Rheingold

I have always been led to believe that the network of footpaths in Britain are the envy of the world; there being more concentration of them per area and in the main better maintained and way-marked. But in my limited experience of walking in Europe, which is now becoming more knowledgeable, I am not quite so sure that fact is true. So far the Rheinburgenweg and intersecting footpaths were extremely well signposted. And not with rickety, sometimes faded wooded finger boards typical of the United Kingdom. Here, signs are sound, properly marked and with distances shown which is not typical of back home. Also, the paths are extremely well maintained. Such as this incredibly pretty stepped path hewn out of the rock leading up from Weilerback to the Hirzenach heights. Once at the top, another reassuring well maintained waysign to cast an eye over. It showed directions and exact distances to Sankt Goar, the Taunusblick viewpoint we enjoyed earlier on, Hirzenach Bahnhof down by the Rhine - should we have needed a train, Bad Salzig, Boppard and Rhens. It also indicated the alternative paths including our Rheinburgenweg and the Welterbesteig. 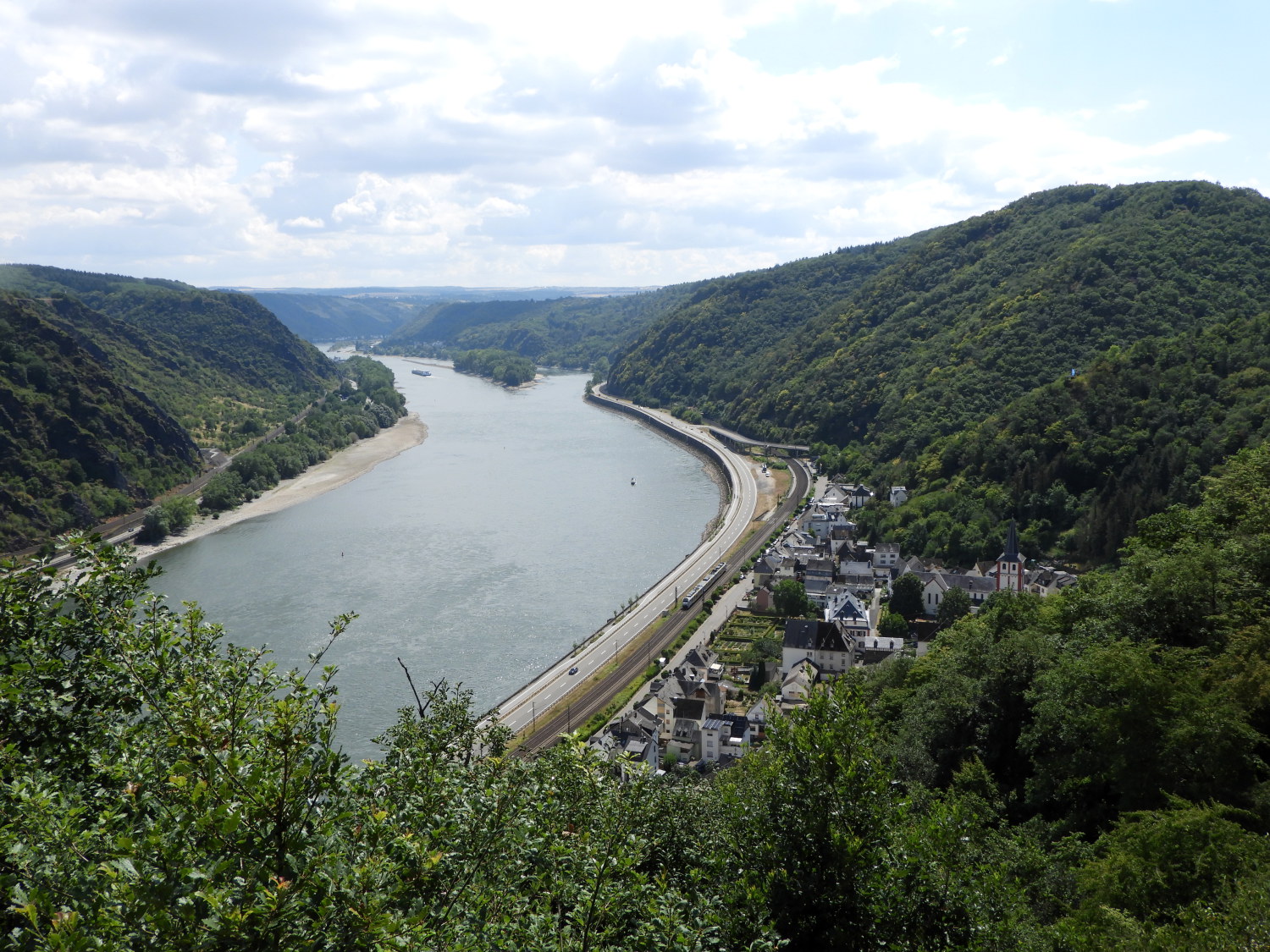 View of Hirzenach and the Rhine 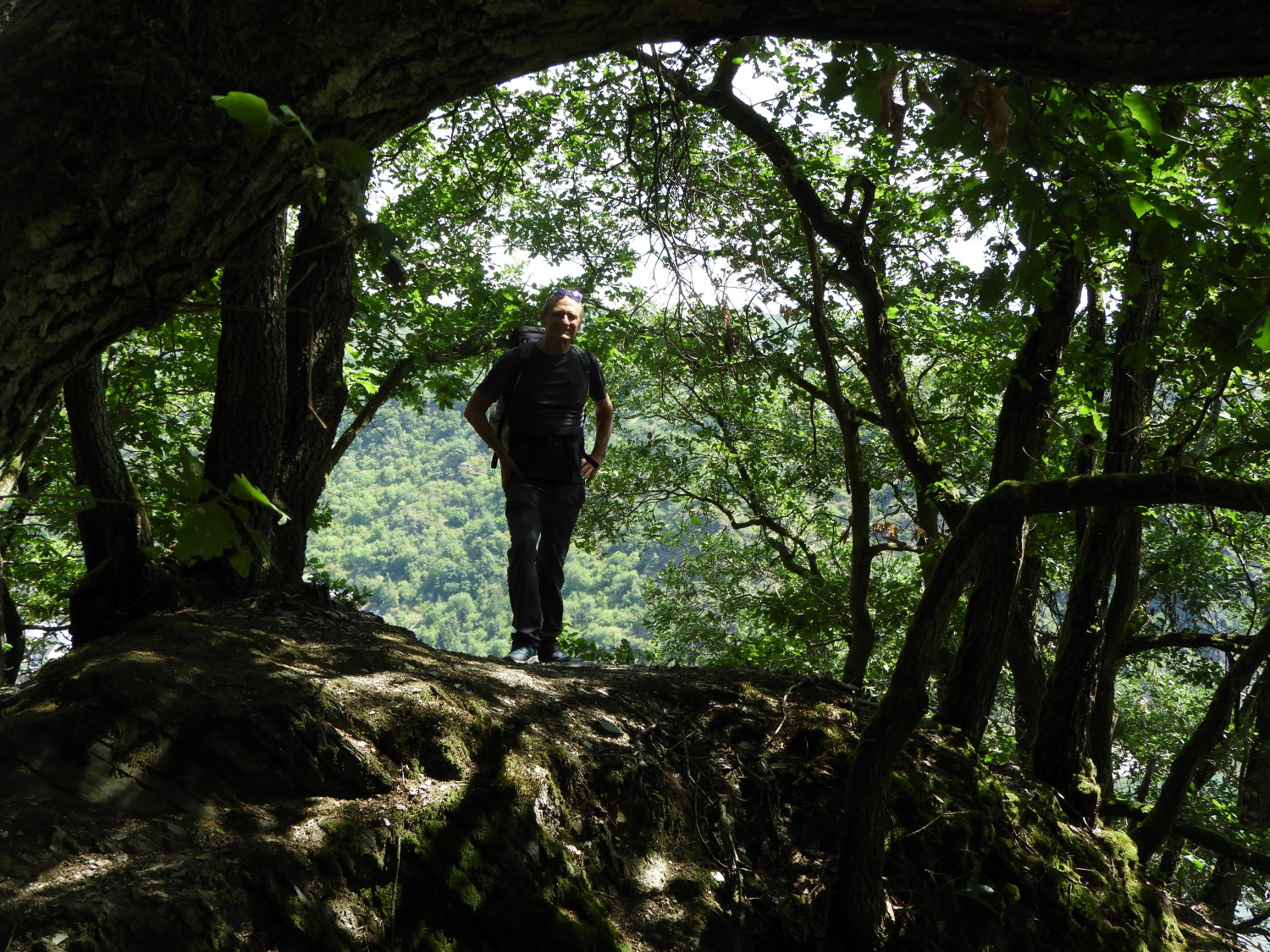 A great vantage point above Palelsbach

It was here we also got our last glimpse of the Rhine until tomorrow. A good one at that with the riverside settlement of Hirzenach nestled on a gradual curve in the river. Beyond Hirzenach we could see the island of Ehrenthaler Werth. It was yet another fabulous viewpoint above the Rhine. We were being spoilt. Not only were the viewpoints revealing but their settings were lovely too. Many had wooden huts to rest in, all complimented with openings to take in the view in, should the weather be inclement. And there were plenty of viewpoints with big curved wooden resting chairs and/ or traditional benches to sit on too. Walkers of the Rhine Castles Trail are well catered for, that is a fact. We took plenty of opportunities to take a break and take in the surroundings at these excellent hikers stop stations. 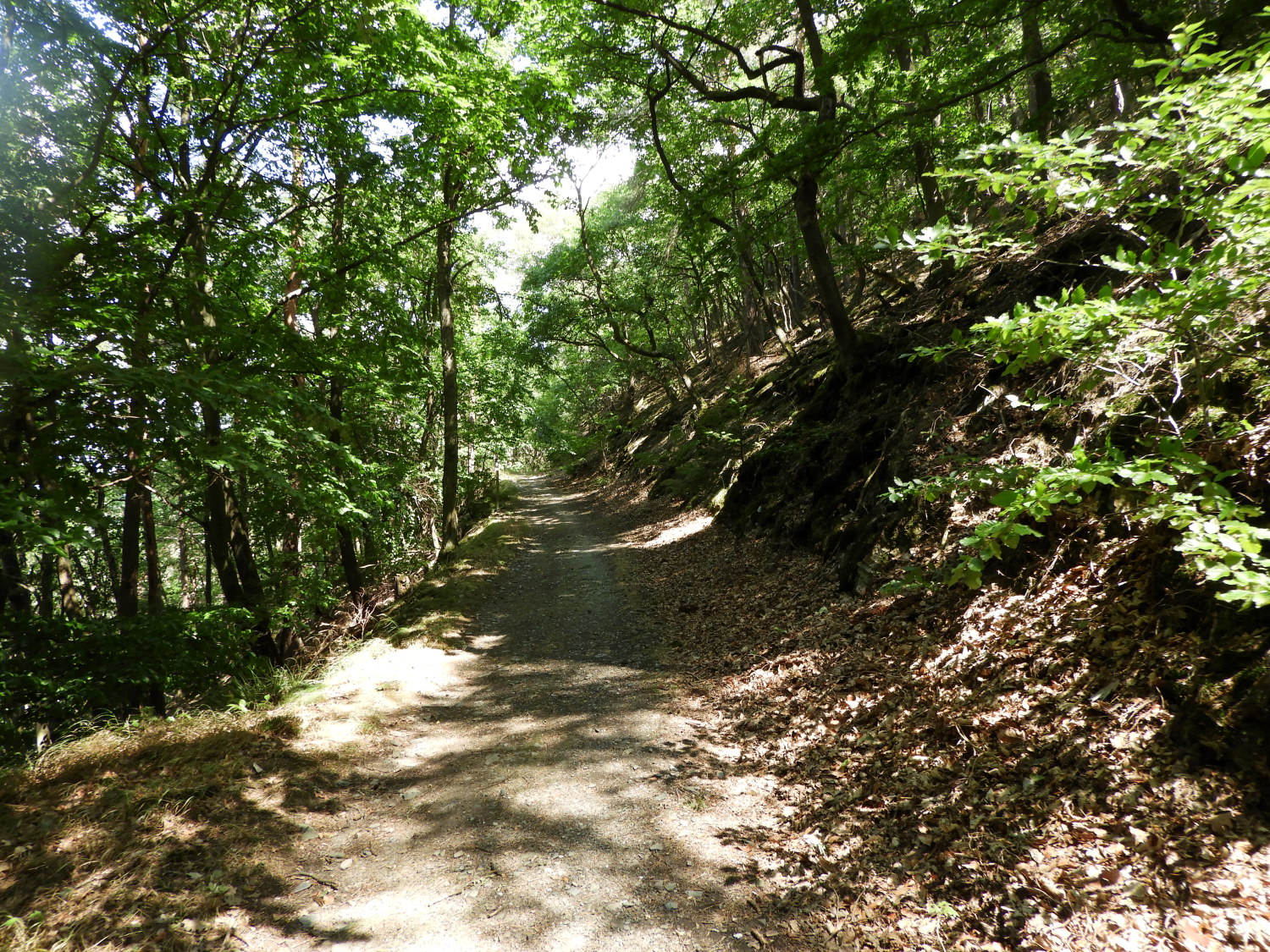 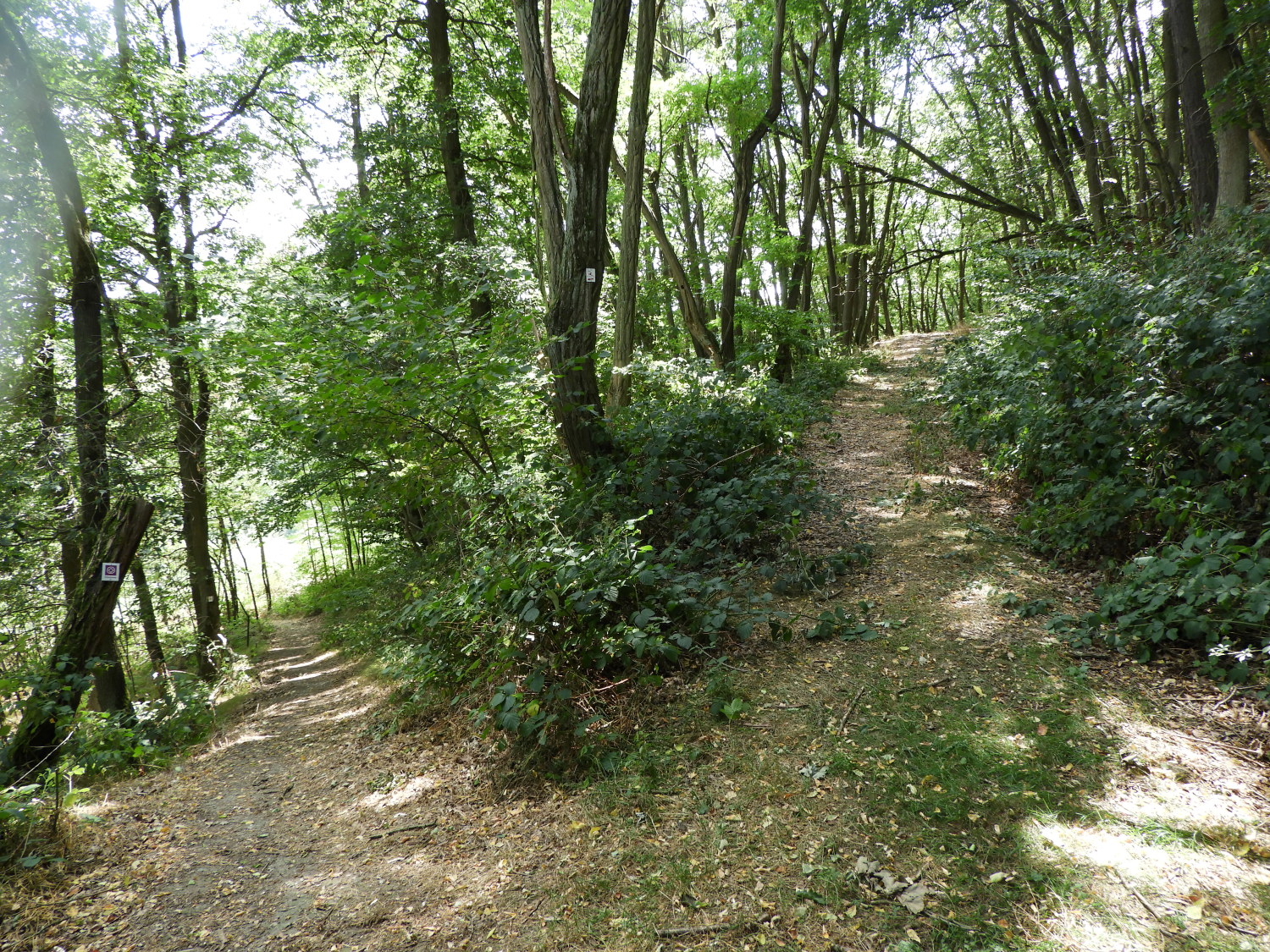 Despite being on the shortest day of our two week walking trek, it still had its fair share of ups and downs. Having just done a down and up between Weiler and Hirzebach we now had another to negotiate between Palelsbach and Holzfeld which skirted around the intriguingly named Wochenendhauser, translated to 'Weekend House'. Perhaps it was a static cabins site. Don't know, we did not take a look. Instead we reached the bottom of our last dip where we crossed the very quiet Hirzenach to holzfeld road before sitting down on a roadside bench to enjoy our lunch. While we did so, which took twenty minutes, just three vehicles passed. A quiet road indeed. Then after lunch, we made that last climb, up to paddock fields on the north edge of our home village this night. 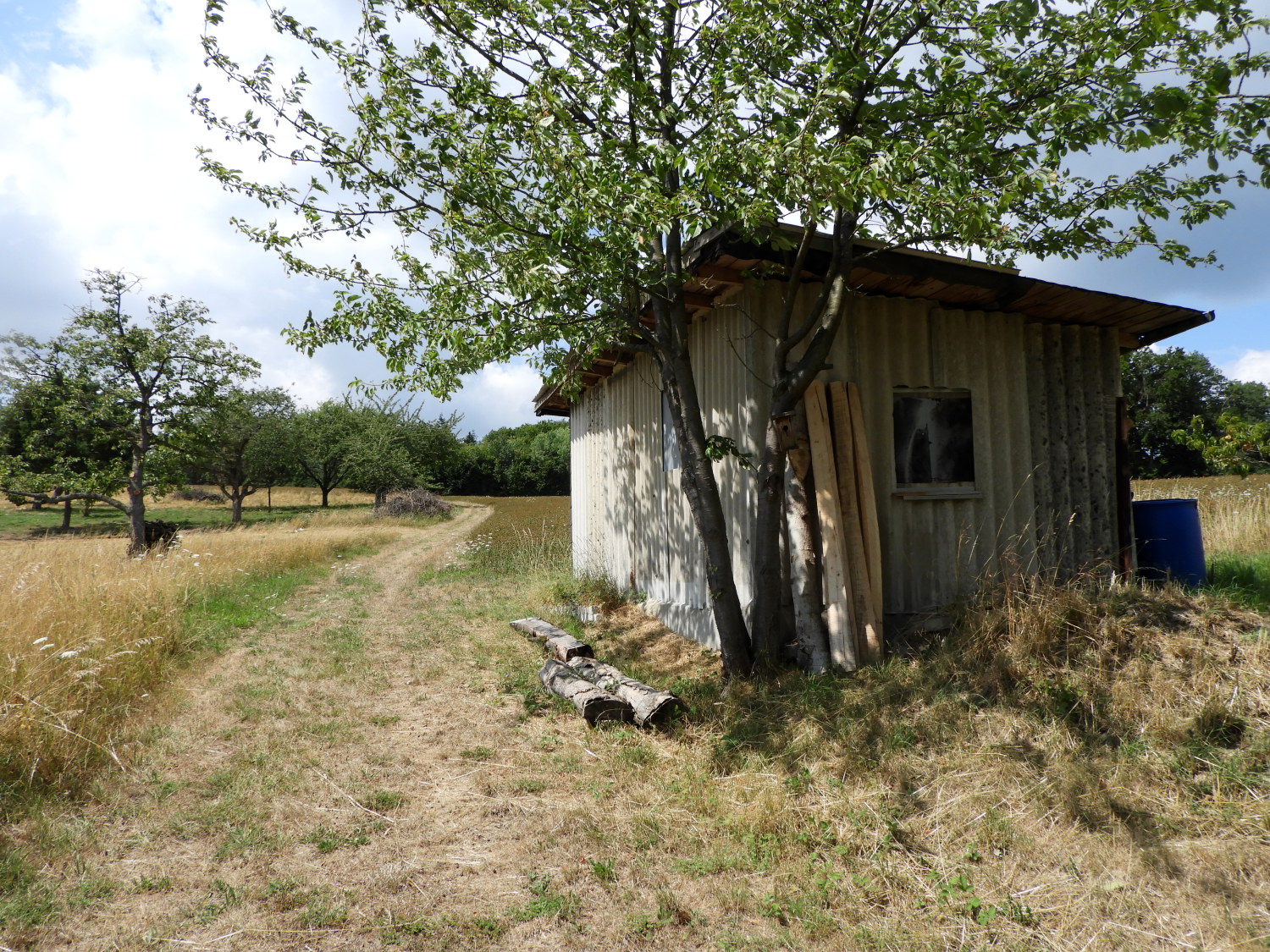 Into the open beyond Wochenend-hauser 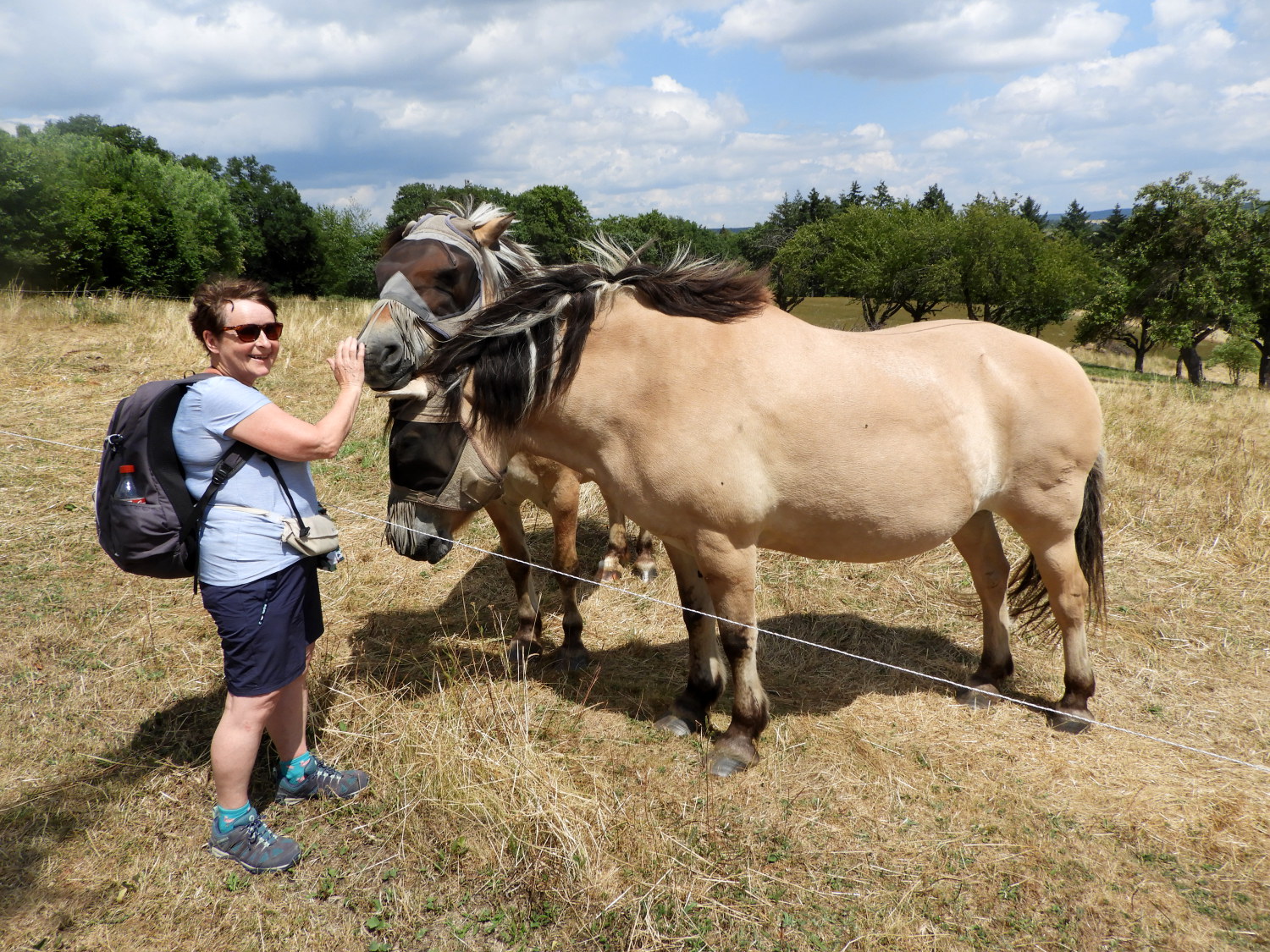 Lil with friendly ponies near Holzfeld

Job done for the day. Almost. Just a few field sides to follow into the village. From the cover of woodland which we had all the way since Weiler we now came out into the open and though sunshine still dominated there was now a flurry of fair weather cloud in the sky. It was welcoming to see them, the first for days. Just before arriving in the village some ponies beckoned us over. Though their heads were shielded from the irritation of insects they could see us and so we went to say hello. They were very friendly. Two fields later, the last one before the village, Lil said hello to two more ponies which crossed their paddock to greet us. These were without head coverings and equally as friendly. 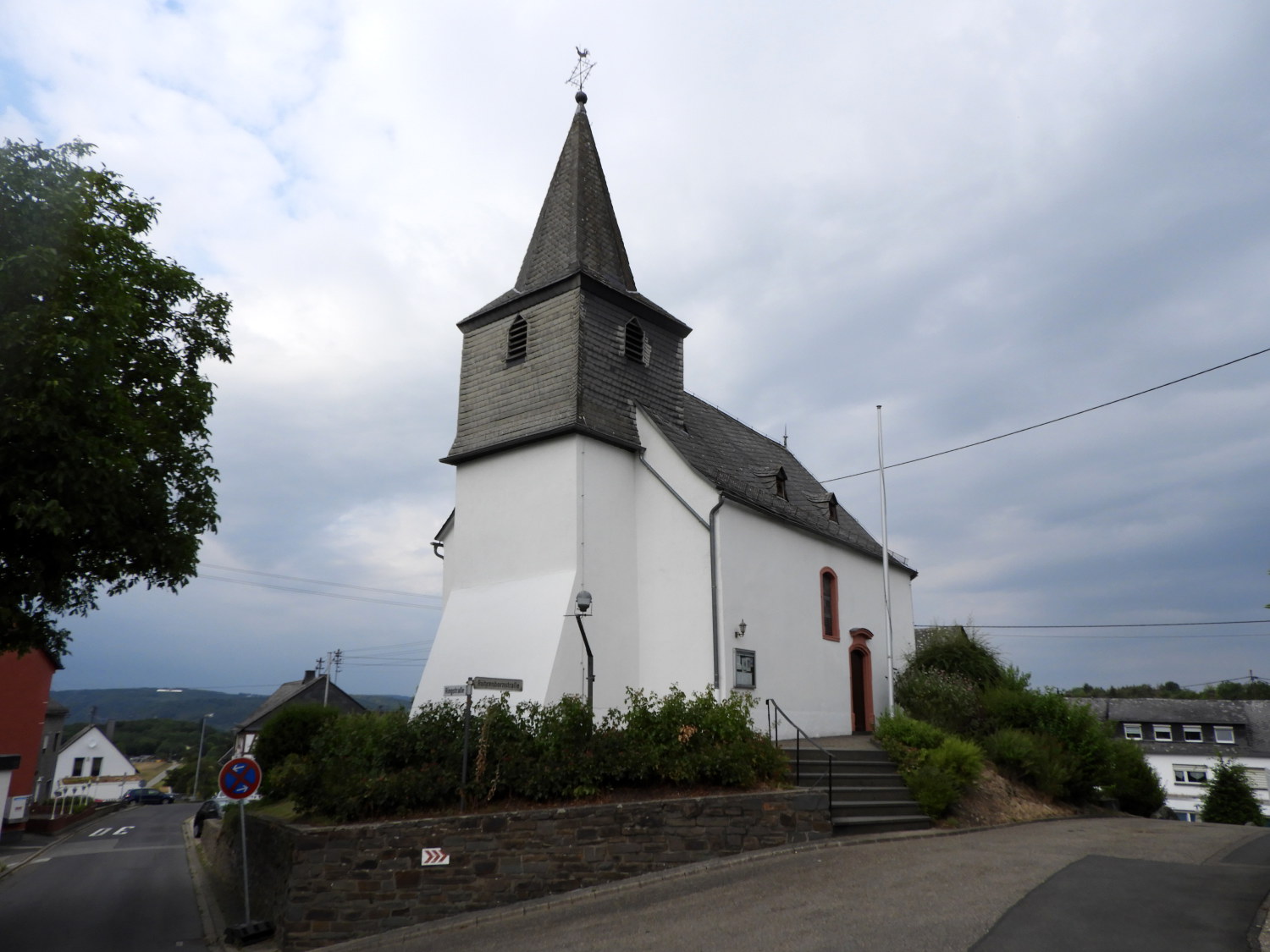 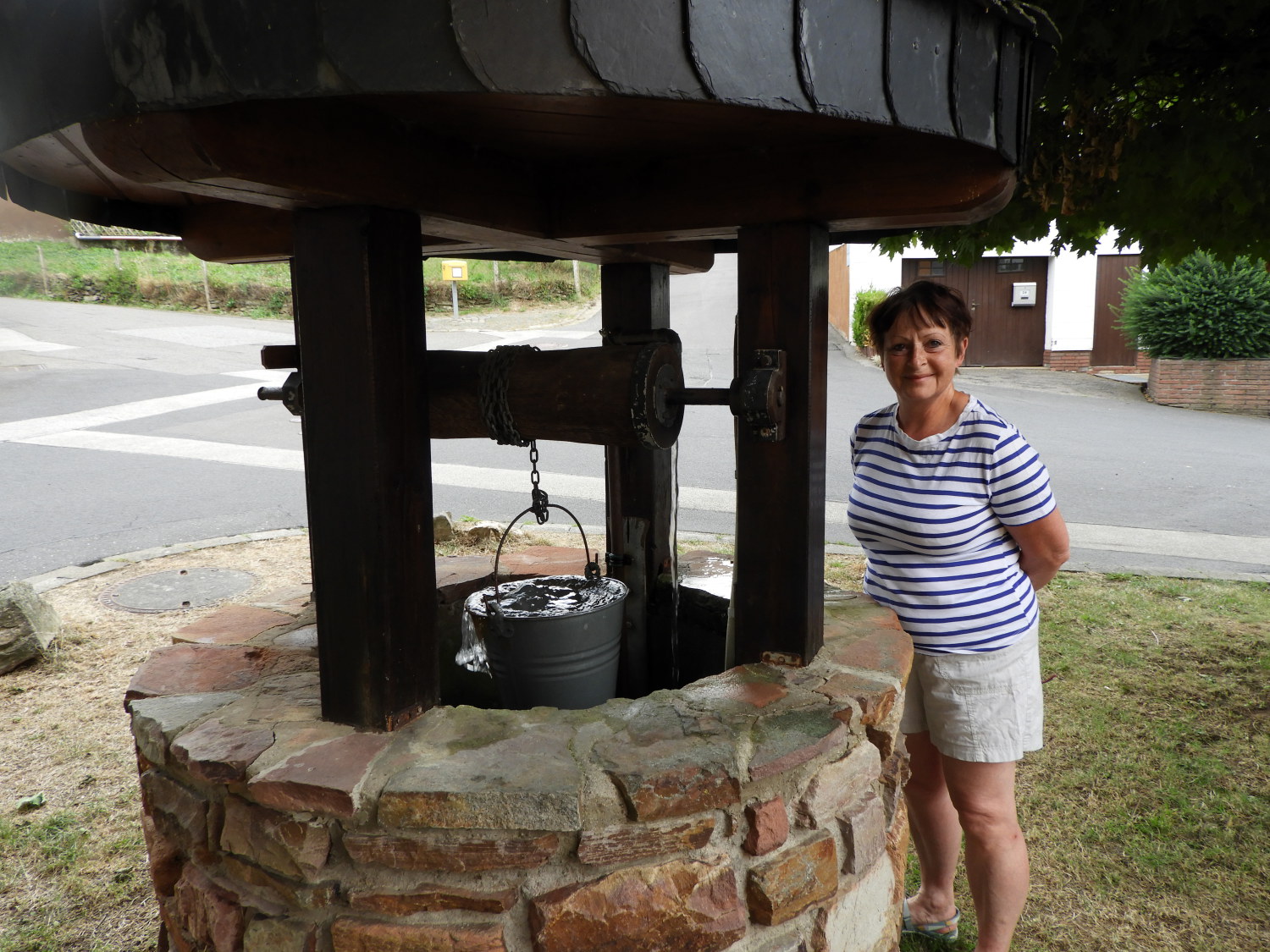 Collecting fresh water from the well

Though we had walked as slow as we could on this short day it was still just two o'clock in the afternoon when we arrived in Holzfeld. The village was very quiet, most likely a commuter village where most worked in neighbouring towns. It was a Thursday after all. Once in the village it took us fifteen minutes to work out where we were staying and once we found the house it took us another fifteen minutes or so to find our host. Who was only in another part of the house through the garden gate! Once all pleasantries had been exchanged and in our accommodation I then had a walk through the village to find a farm shop, the only place we could get food for the night. Luckily I had carried drinks from Boppard, so we were halfway to a good night already. The shop did the rest. Then, after dinner, we took a walk around the pretty village, passing the village church and down to the village well. It was a lovely end to another lovely day on the Rheinburgenweg. And so to bed. Settling down for the night I said to Lil "Sleep well sweetheart. It's downhill from the start tomorrow". That was the first time I could say that since the very beginning of our journey.